The United Nations Decade of Ocean Science (UN Ocean Decade) is an international framework to manage the ocean sustainably through ocean science in order to achieve the United Nations' Agenda 2030 for Sustainable Development. In this context, the UN Ocean Decade has formed an official program of Early Career Ocean Professionals (ECOP). This symposium aims to discuss the future of ECOP from the perspective of early- and mid-career professionals by inviting speakers from various fields of science and industries.

In the opening remarks, Dr. Shigeki Sakamoto, President of the Japan Society of Ocean Policy and Professor Emeritus of Kobe University, expressed his gratitude for the fact that networking activities to create transdisciplinary bonds have been carried out, given the concern over insufficient ECOP resources in ocean science are increasing in Japan. He also mentioned that it is necessary for early-career Japanese professionals to actively participate in international activities, without hesitating to take part in the international stages due to language and cultural barriers, and to speak in plain English with confidence in the content of their research.

Dr. Yushi Morioka, a researcher of Japan Agency for Marine-Earth Science and Technology (JAMSTEC), introduced the overview and objectives of the ECOP program within the framework of UN Ocean Decade, as well as the activities that the regional node for Asia has been conducting so far. Mr. Raphaël Roman, the individual consultant for the ECOP Asia community, then introduced himself and expressed his hopes for connecting the ECOP communities in the world, Asia, and Japan.
Dr. Takeshi Kawano, Executive Director of JAMSTEC, delivered a keynote speech. He introduced JAMSTEC's research and development programs, and their support and outreach activities for early-career researchers and the next generation.

Subsequently, five early- to mid-career experts with backgrounds in a variety of fields presented their hopes and challenges for building the ECOP network, followed by a plenary discussion. Dr. Aoi Sugimoto, a researcher of the Fisheries Research and Education Agency, who specializes mainly in marine social science and science communication, spoke about the importance of shifting from existing values such as competition, control, and hierarchy to new value systems such as cooperation, openness, and decentralization in the ECOP network of the UN Ocean Decade. Associate Professor Ryota Wada of the Graduate School of Frontier Sciences, the University of Tokyo gave a presentation titled "The Creation of New Marine Industries and Young Human Resources" on the importance of open innovation for the social implementation of marine technologies, and the need for "human resources in different fields" and "doctoral personnel" to drive such innovation. Dr. Kodai Taguchi, Project Assistant Professor at the Marine Education Center, Graduate School of Education, the University of Tokyo, and the representative of 3710Lab (Minato Lab), raised the necessity of clarifying the objectives of the ECOP network from the perspective of those involved in marine education. Furthermore, he proposed the importance of taking social science into account of marine science, as well as the importance of creating a mechanism to support ECOP. Mr. Yota Takakura, CEO of Innoqua Inc., introduced his company, which uses AI technology to conserve coral and the marine environment, not as a researcher but as a marine startup company. He then spoke about the need to create a network of young people to create interaction that transcends the boundaries of industry and academia, and to create a mechanism to continue this communication. The fifth panelist was Dr. Yoshiko Kondo, Associate Professor of Nagasaki University’s Graduate School of Fisheries and Environmental Science, who specializes in marine chemistry. Based on her career as a researcher, she expressed her hopes for strengthening programs to support students entering doctoral programs and increasing opportunities for young researchers to conduct research overseas.

The panel discussion that followed the presentations was moderated by Dr. Hide Sakaguchi, President of Ocean Policy Research Institute of the Sasakawa Peace Foundation, and included five early- to mid-career experts, as well as the MC, Mr. Kotaro Tanaka, Research Fellow of Ocean Policy Research Institute of the Sasakawa Peace Foundation, and Dr. Yutaka Michida, vice president of Japan Society of Ocean Policy and the professor of Atmosphere and Ocean Research Institute at the University of Tokyo. The discussion began with questions from the audience, including communication with people working in the marine industry, motivation for overseas research activities, how they first became interested in the ocean, and the importance of community-based research and training. Discussions were also held on the future direction of the ECOP network, including cross-sectoral exchanges between industry, government, and academia, the position of marine education in the network of early-career people, and the development of doctoral human resources.

Finally, Prof. Yutaka Michida stated the importance of creating opportunities for inter-disciplinary exchange like this symposium, and that we should not end up with science for science's sake, but that we need to have a broad perspective and interact with a wide range of stakeholders. He concluded the symposium by expressing his hope for the utilization of local and indigenous knowledge, which was mentioned in the questions, and his desire to continue supporting ECOP. 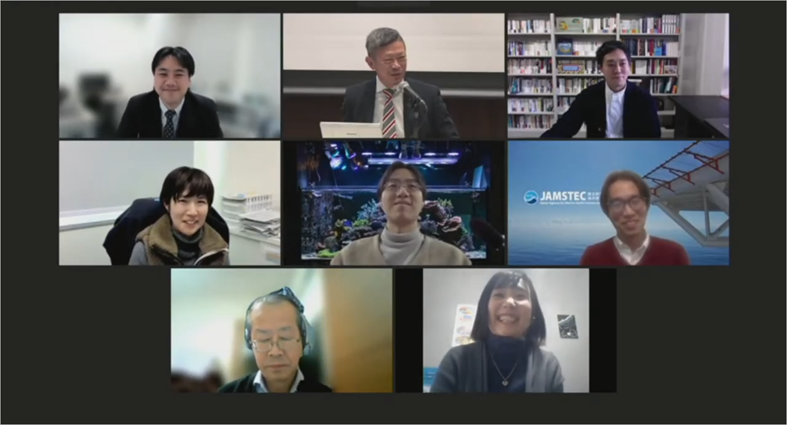