The narrowing distance between Japan and Europe 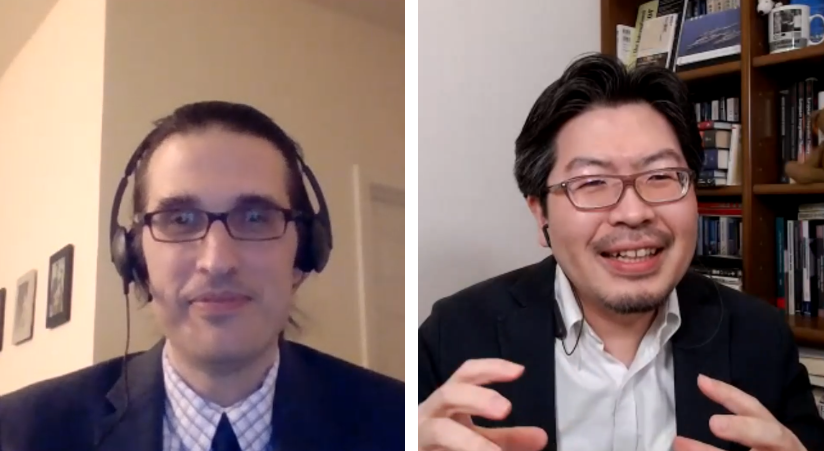 As strategic competition ramps up across the Indo-Pacific region, countries in Europe have begun to shift their focus toward the region by deepening security ties with likeminded partners, including Japan. As part of this trend, earlier this year Japan’s foreign minister was invited for the first time to discuss the country’s Free and Open Indo-Pacific policy at the European Union's Foreign Affairs Council, and European navies including France and the U.K. have resumed sending warships for exercises in the Pacific with Japan. Germany, a county with less historical involvement in the region, also presented its first ever guidelines for Indo-Pacific policy in September 2020 and is weighing plans to send a naval frigate to Japan during the summer of 2021.

However, research looking into the types of partnerships and the motivations behind the deepening ties between Japan and countries in Europe as well as the North Atlantic Treaty Organization (NATO) – all of which are valuable, longstanding partners to the U.S. particularly in the security realm – have not been well documented from a U.S. perspective.

To fill this gap, Dr. Jeffrey Hornung, a political scientist for the RAND Corporation and leading U.S. researcher specializing in Japanese security policy, conducted a two-year research project with support from the Sasakawa Peace Foundation (SPF), resulting in the publication of the report “Allies Growing Closer: Japan–Europe Security Ties in the Age of Strategic Competition" in December 2020. This report takes an in-depth look at the central elements and motivations behind the security ties between Japan and the U.K., France, Germany, and NATO, and considers the implications for U.S. strategic interests. 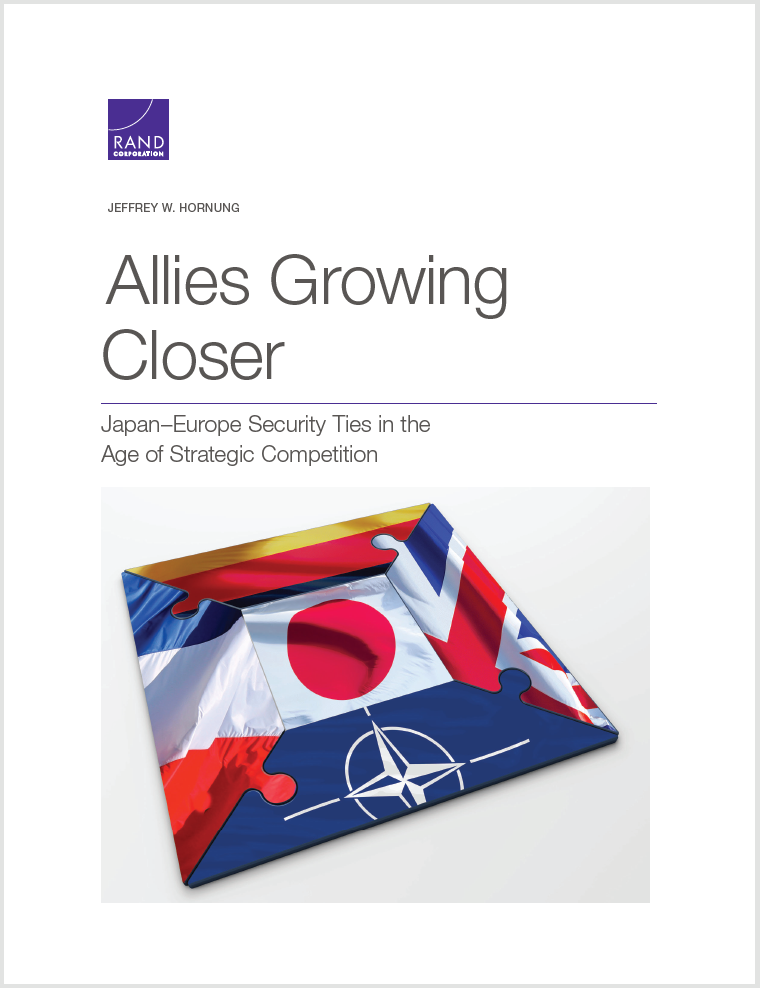 "Allies Growing Closer: Japan–Europe Security Ties in the Age of Strategic Competition" is available for download.

To present the main outcomes from the report and discuss the ongoing implications of these findings, SPF’s Japan-U.S. Program held an online seminar entitled “Japan-Europe Security Cooperation from U.S. Perspectives,” on March 30, 2021, featuring remarks by Dr. Hornung as well as Dr. Michito Tsuruoka, associate professor for the Faculty of Policy Management at Keio University and a leading Japanese expert in European affairs.

SPF Executive Director Junko Chano gave opening remarks for the online event, noting that “the distance between Asia and Europe is narrowing,” as evidenced by increasing interest of European countries in deepening ties with Japan, making this research a timely and significant contribution to the security literature.

Dr. Hornung followed with his main remarks outlining the primary findings from this research project, which was conducted in part as a visiting fellow at SPF during the summer of 2019 as well as through research trips to Europe. Through analysis of the status of defense and strategic dialogues, defense exchanges and cooperation, as well as training and exercises between Japan and European partners, Dr. Hornung noted that the motivations of the three European countries, NATO, as well as Japan align on several major areas. These include the desire to protect multilateralism and the rules-based international order, the understanding that the U.S. is an important strategic ally and world power, an appreciation of the interconnectedness between the Indo-Pacific region and Europe, as well as an increasing concern regarding China.

However, he also noted important areas of difference between Japan and European partners, particularly over perceptions and approaches toward strategic adversaries, namely China and Russia. While perceptions in Europe continue to shift, the research indicated that generally European actors were more inclined to maintain constructive relations with China, which caused them to temper their aggressiveness when responding to China’s actions. Japan, on the other hand, tends to be more confrontational as demonstrated through its willingness to “name and shame” China.

Instead, European actors were generally more preoccupied with Russia, which they view as posing a serious threat to international norms. Since Dr. Hornung’s research was conducted as the Abe administration in Japan was pursuing peace treaty negotiations with Russia regarding the Northern Territories, some in Europe expressed concern that Japan was not fully rallying behind efforts to push back against Russia in order to protect the international order.

Dr. Hornung concluded his presentation by reflecting on the broader implications for Japan-Europe relations from the U.S. perspective. He argued that the trend toward deepening ties between partners is a net positive for the U.S., given the fact that an interlocking network of allies will boost the power of collective action, increase mutual awareness of issues, and allow for greater resource sharing.

“The U.S. recognizes China as posing a challenge to the region, and as the Quad meetings shows, the U.S. recognizes it can't sustain a free and open Indo-Pacific by itself,” explained Dr. Hornung, bringing the conversation to current challenges facing the region. “The Biden administration is prioritizing the need to work with friends and allies, and having European allies and Japan work closer together, especially in the security domain, supports this effort as the U.S. looks to work with like-minded allies and partners to address common challenges.” 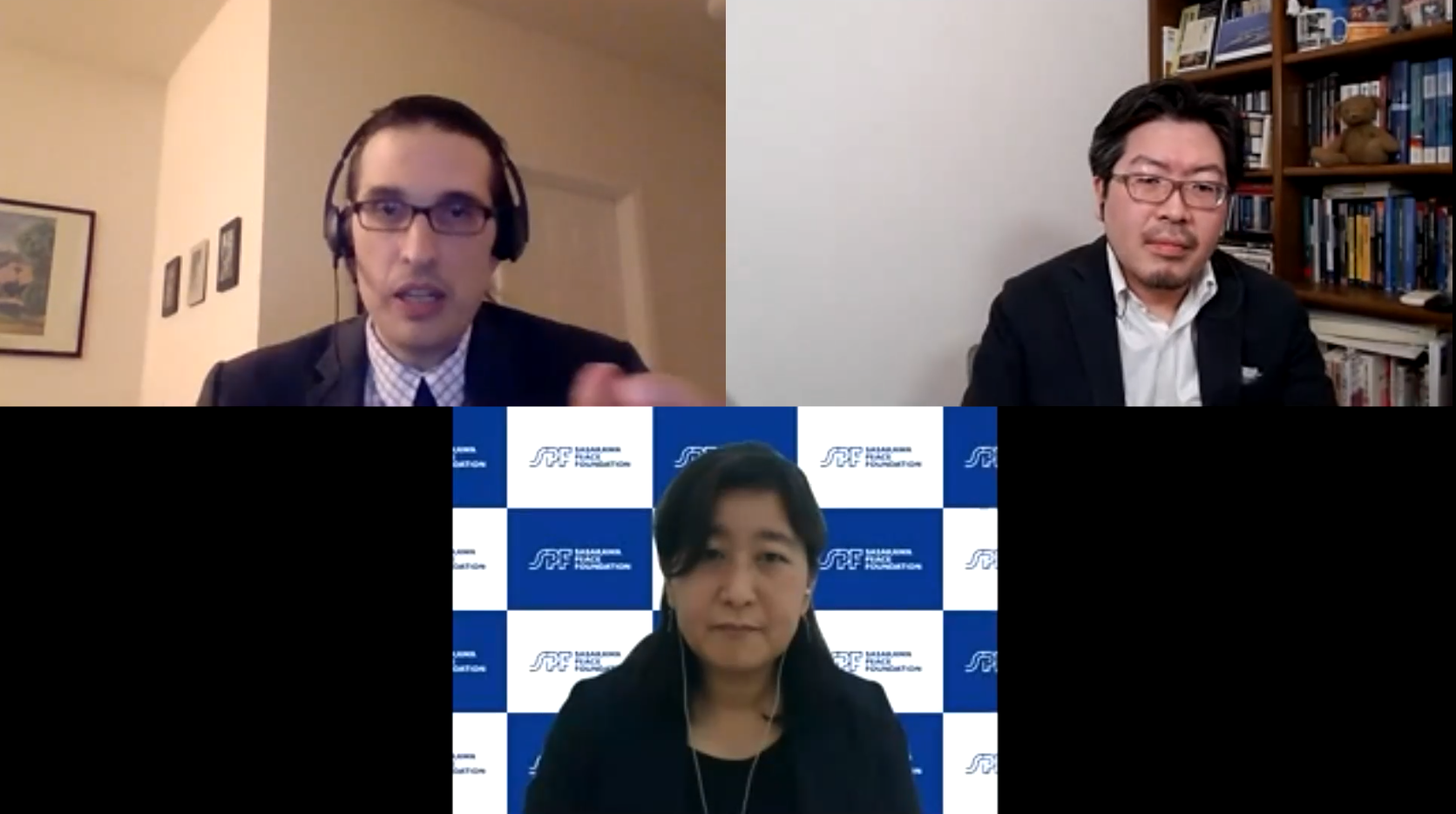 Following Dr. Hornung’s presentation, Dr. Tsuruoka responded to the report’s findings from a Japanese perspective. He began by pointing to a prevailing skepticism on the Japanese side regarding the benefit of strengthening partnerships with European countries. To many in Japan, the Japan-U.S. alliance remains the main priority, particularly given the fact that European partners are limited by a perceived lack of motivation and potentially divergent security interests. In addition, the large geographical distance separating Europe from the Pacific hinders quick action, making European partners unable to step into the role played by the U.S., particularly in an emergency situation.

However, Dr. Tsuruoka strongly countered this argument, maintaining that creating multi-layered relationships with Europe should not be seen as a way to replace the Japan-U.S. alliance but rather as a way to shore up and strengthen the full network of partnerships.

“Diversification is a word frequently used when talking about Japan-European security cooperation...[Dr. Hornung’s report] uses the phrase ‘additional layer.’ The U.S.-Japan security alliance is the foundation, and on top or in addition to the U.S.-Japan security alliance a different layer is being added. If that can be done, then this would be beneficial for Japan,” explained Dr. Tsuruoka, using his own term “plug in” to describe this type of cooperation. “The term diversification might connote the image that we’re trying to replace the Japan-U.S. security alliance. I think it’s important that we put that misconception aside [and consider] how we can utilize and leverage European [partnerships] on top of the Japan-U.S. security alliance.”

Looking to the future, Dr. Tsuruoka noted that in order to seize this opportunity for constructive collaboration, both Japan and European partners must clarify their strategic roles in Asia, set expectations, and send out a strong and clear message of these positions.

Dr. Hornung also responded to potential skepticism about the value of partnerships between Japan and Europe and acknowledged that there are certain bottlenecks including physical distance and limited resources. “If people think Europe sending ships to the Indo-Pacific means they’re willing to fight for the Senkaku Islands, I think they're going to be disappointed,” he explained. However, he maintained that the value of strengthening alliances is ultimately “not about the war fighting elements, but it's more about the other elements in peacetime including learning certain skills or industrial cooperation.”

To conclude the session, the panelists addressed a wide range of questions from the audience covering a variety of topics including potential limits to Germany’s role in the Indo-Pacific region, shifts in the perception of China by European countries since the publication of the report, and a potential role for other regional partnerships such as ASEAN (Association of Southeast Asian Nations) and the Quad (Quadrilateral Security Dialogue). Given the high level of interest from the audience and breadth of questions received, it is clear that the deepening links between Europe and Japan will continue to be a critical area for further analysis to better understand the future of security policy linking together the Indo-Pacific, Europe, and the U.S.
Japan-U.S. Program Northeast Asia Europe and Eurasia
Share