Climate of the Senkaku Islands (Climate Classification and Weather Conditions)

Climate Classification
The Senkaku Islands are classified as having a tropical rainforest climate (Af) under the Köppen climate classification. (Ref. 1)

They are classified as having a Nansei Islands climate under Sekiguchi Takeshi's climate divisions for Japan. (Ref. 2)

The Japan Meteorological Agency includes them in the Yaeyama District in its prefectural forecasts. They have a hot and humid subtropical marine climate with an annual mean temperature of over 23°C. The average annual rainfall is more than 2,000 millimeters, around 500 millimeters more than Tokyo. In summer, from July to September, Pacific high-pressure systems dominate and fine days are common, with successive days when the temperature rises above 30°C and nights when it does not fall below 25°C. As much of the islands' rainfall comes from typhoons, if few typhoons hit the area there is a possibility of drought. In winter, continental high-pressure systems expand and monsoons arrive from the north, bringing many chilly days with light rain. (Ref. 3)

Wind and Air Current Estimates for Uotsuri Island, Minamikojima Island, and Kitakojima Island (1979)
In its 1979 survey regarding potential development of the Senkaku Islands for usage, as part of surveys of natural conditions, the Okinawa Development Agency made estimates of wind direction, wind speed, and air currents over the year for Uotsuri Island, Minamikojima Island, and Kitakojima Island. These estimates combined data including materials from the Japan Meteorological Agency's offices in the Miyako Islands and the Yaeyama Islands, which are relatively close to the Senkakus; monthly average surface pressure distribution charts taken from many years of records; and geostrophic wind data calculated on the basis of these materials. The agency estimated that general wind characteristics in the Senkaku Islands were similar to those in Miyakojima Island. However, the Senkakus are small in area and not as flat as Miyakojima Island, leading to a possibility of considerable differences. The agency therefore also incorporated the characteristics of winds for Yonagunijima Island, which is relatively small and hilly. Based on this, monthly estimated wind speeds, wind direction frequency tables, and wind roses were prepared for Uotsuri Island. (Ref. 4) 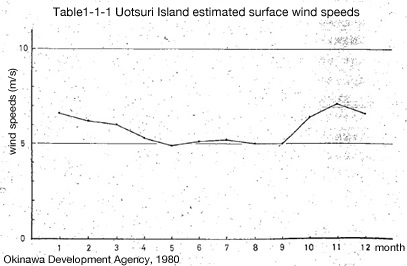 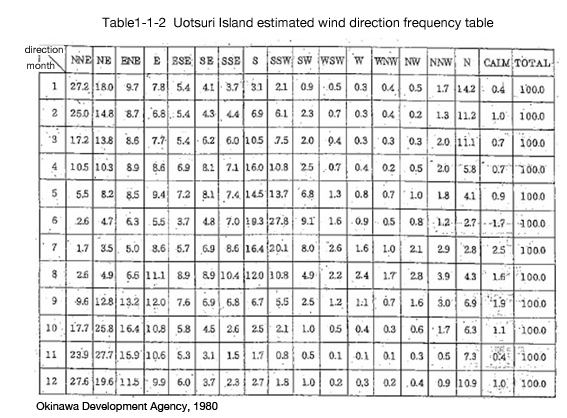 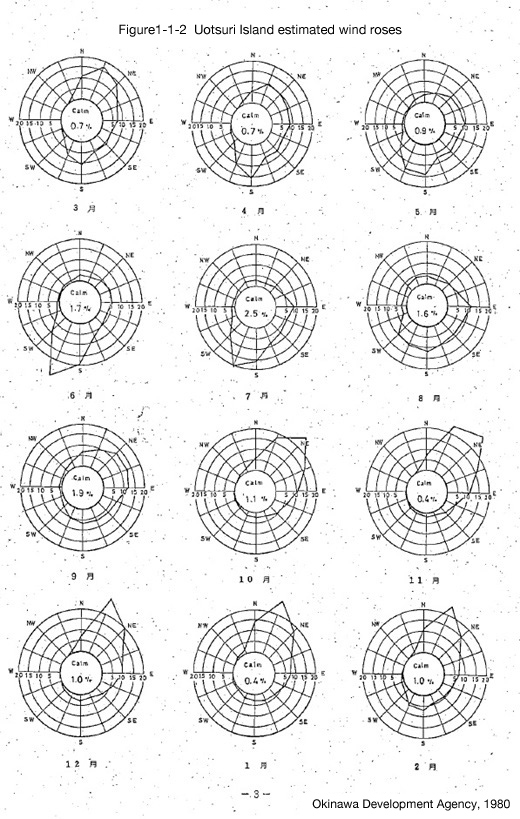 Wave Estimates for Sea Around Senkaku Islands (1979)
In the same 1979 survey regarding potential development of the Senkaku Islands for usage, the Okinawa Development Agency made wave estimates for the sea around the Senkaku Islands. These estimates use the results of wave calculations made via the significant wave method, which predicts wind and wave details based on meteorological charts from times of extreme weather conditions. The aim is to establish climate and weather conditions in the given area when the weather is abnormal. The results showed that when a typhoon with central pressure of less than 930 hPa (mb) is on a course taking it past the Senkaku Islands' southwest coast, considered to be the most dangerous approach, significant wave height is estimated to be 16 meters, with a wave period of 17 seconds and waves coming from the east. When winter waves are at their strongest due to monsoons, significant wave height is estimated to be from 6 to 7 meters with a wave period of 8 to 10 seconds and waves coming from the north. The results also give details including highest waves by wave direction. (Ref. 4) 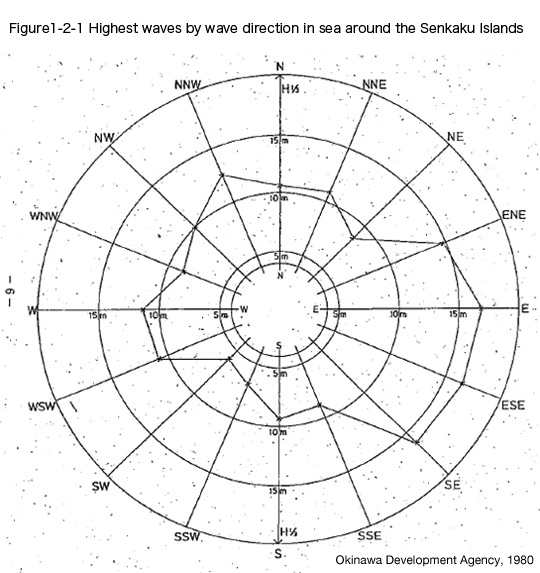