Throughout May and June of 1939, a Natural Resources Survey Team of the former Ministry of Agriculture and Forestry's agricultural research stations (Kobayashi Jun, Takahashi Naoyuki, Tada Takeichi of the company Koga Shoten, and 14 others), conducted a survey on mineral resources in the Nansei Islands (the larger archipelago encompassing both the Ryukyu Islands, which include Okinawa Prefecture, and the Satsunan Islands, which belong to Kagoshima Prefecture), including the Senkaku Islands. The report includes lists of plants, birds, insects, butterflies, shellfish, clams, and other lifeforms observed and collected on Uotsuri Island, Kitakojima Island, Minamikojima Island, and Kuba Island. These were collated in the magazine Saishu to Shiiku (Collecting and Breeding) by expedition member Masaki Tsutomu, a biologist at the Ishigakijima Weather Station.

He describes finding it odd that despite being separated by a mere 200 meters, the sooty tern gathers on Kitakojima Island, while the Ryukyuan brown booby gathers on Minamikojima Island A plain a mere three to four cho (about 10,000 square meters) across is inhabited entirely by sooty terns, flying so densely that a swing of a stick is enough to knock two or three of them out of the air, and they blacken the sky when taking wing. He also mentions that on Uotsuri Island, one must be careful of the many field rats. 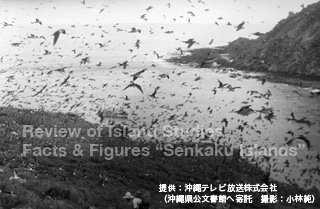 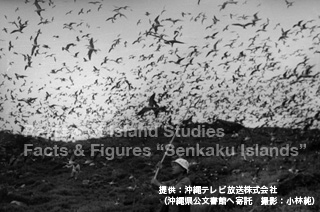 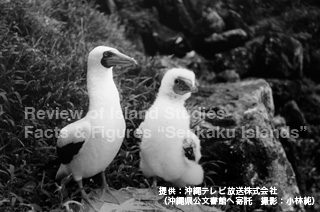 Photo courtesy of Okinawa Television Broadcasting (in the Okinawa Prefectural Archives; photo by Kobayashi Jun) Above:Seabirds residing across Kitakojima Island and Minamikojima Island
Middle:An enormous number of seabirds
Below:View of hatchlings (Kitakojima Island)
All were photographed during the Ministry of Agriculture and Forestry Natural Resources Survey (1939).

The survey reported that there are many brown boobies on Kuba Island, as well as sooty terns, shearwaters, and the newly collected masaki betsukafu maimai.

The report says that brown noddies and sooty terns can be seen on Taisho Island, and that the pacific swallow, house martin, Ryukyuan ruddy kingfisher, and yellow bittern also live there. It further says that examples of the balanidae family of barnacles can also be found on rocks in the tidal zone, and that groups of tropical rock lobster were seen in puddles left behind in the hollows of large rocks.

Note that this report by Masaki is the only known report on the lifeforms of Taisho Island.

At the end of the report, Masaki calls for the preservation of Uotsuri Island's old-growth forest and restrictions on the capture of Kitakojima Island's sooty terns and Kuba Island's brown boobies and shearwaters. He also points to the urgent need for the designation of the sooty tern as a protected species and a ban on making landfall on Kitakojima Island, its breeding ground.