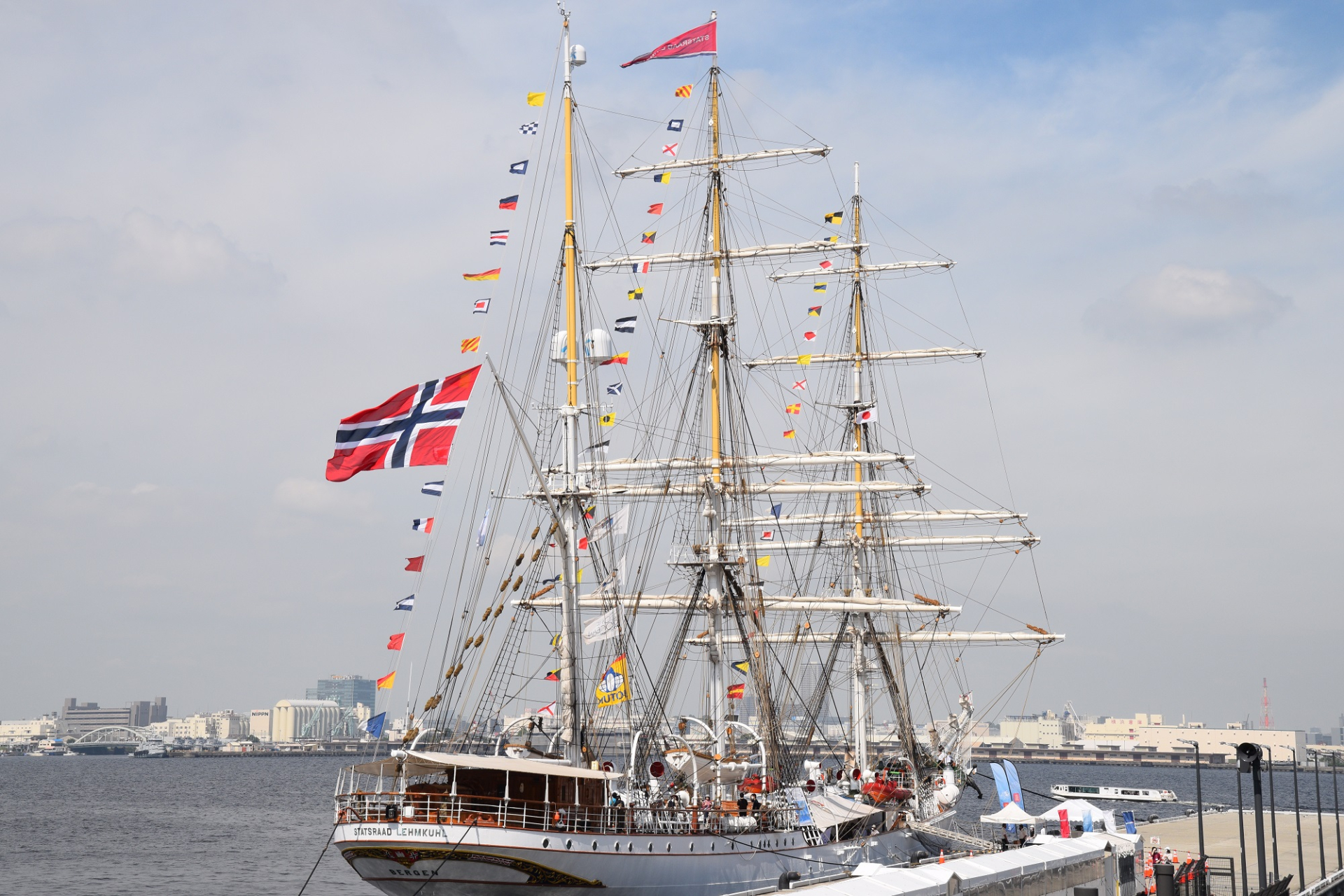 The United Nations has designated 2021-2030 as the Decade of Ocean Science for Sustainable Development. To study the effects of global climate change and ocean pollution, the Norwegian tall ship Statsraad Lehmkuhl is currently conducting the "One Ocean Expedition," a 19-month voyage around the world, which started from Norway in August 2021. On September 12, 2022, Statsraad Lehmkuhl arrived at Yokohama Hammerhead, its first port of call in Asia.

The voyage to Yokohama included 75 people from 12 countries, consisting of 25 crew members (scientists, meteorologists, journalists, and others) as well as 50 voyage trainers. During the voyage, the ship collected information on ocean acidification, microplastics, marine life, and weather. New knowledge about the oceans gained from these observations will be shared with scientists and young people from all over the world to raise awareness of the current status and challenges our ocean faces.

The Ocean Policy Research Institute (OPRI) of the Sasakawa Peace Foundation (SPF) supported this initiative, and at the "Our Ocean Conference" held in Palau in April 2022, and at the "United Nations Ocean Conference" held in Portugal in June 2022, OPRI President Hide Sakaguchi (Executive Director, SPF) notified the audience of opportunities for young people to participate in the One Ocean Expedition from Koror, Palau to Yokohama.

Out of more than 100 applicants, 6 people were selected, and a total of 7 participants, including Ms. Nana Hashimoto from the Division of Ocean Policy Planning and Management at OPRI, joined the 16-day voyage. The participants came from Palau (2), Fiji, Indonesia, Portugal, and New Zealand, and the ratio of men to women was kept as close to 50% as possible. Participants included students and young professionals aged 18 to 30 years old and from various backgrounds. 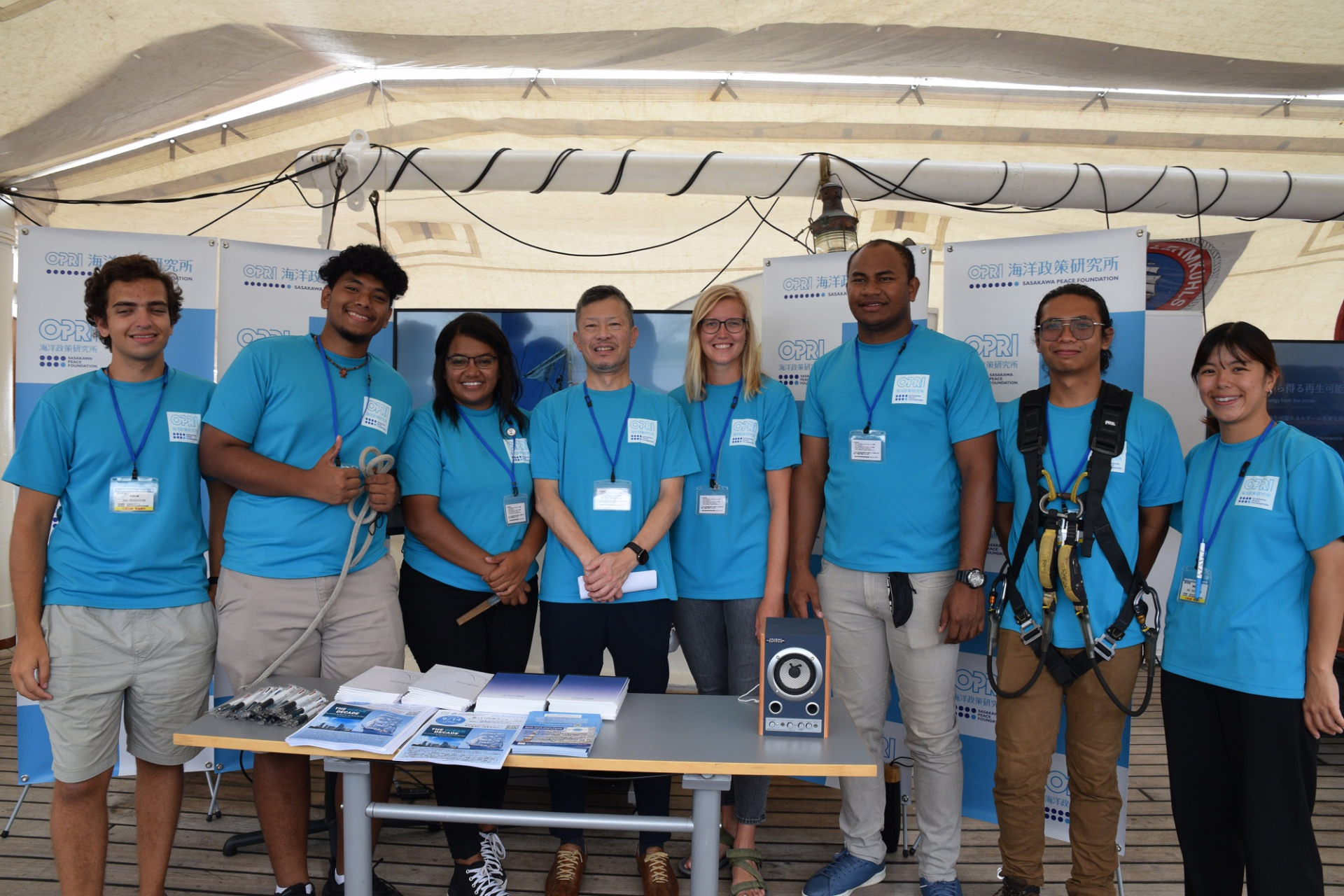 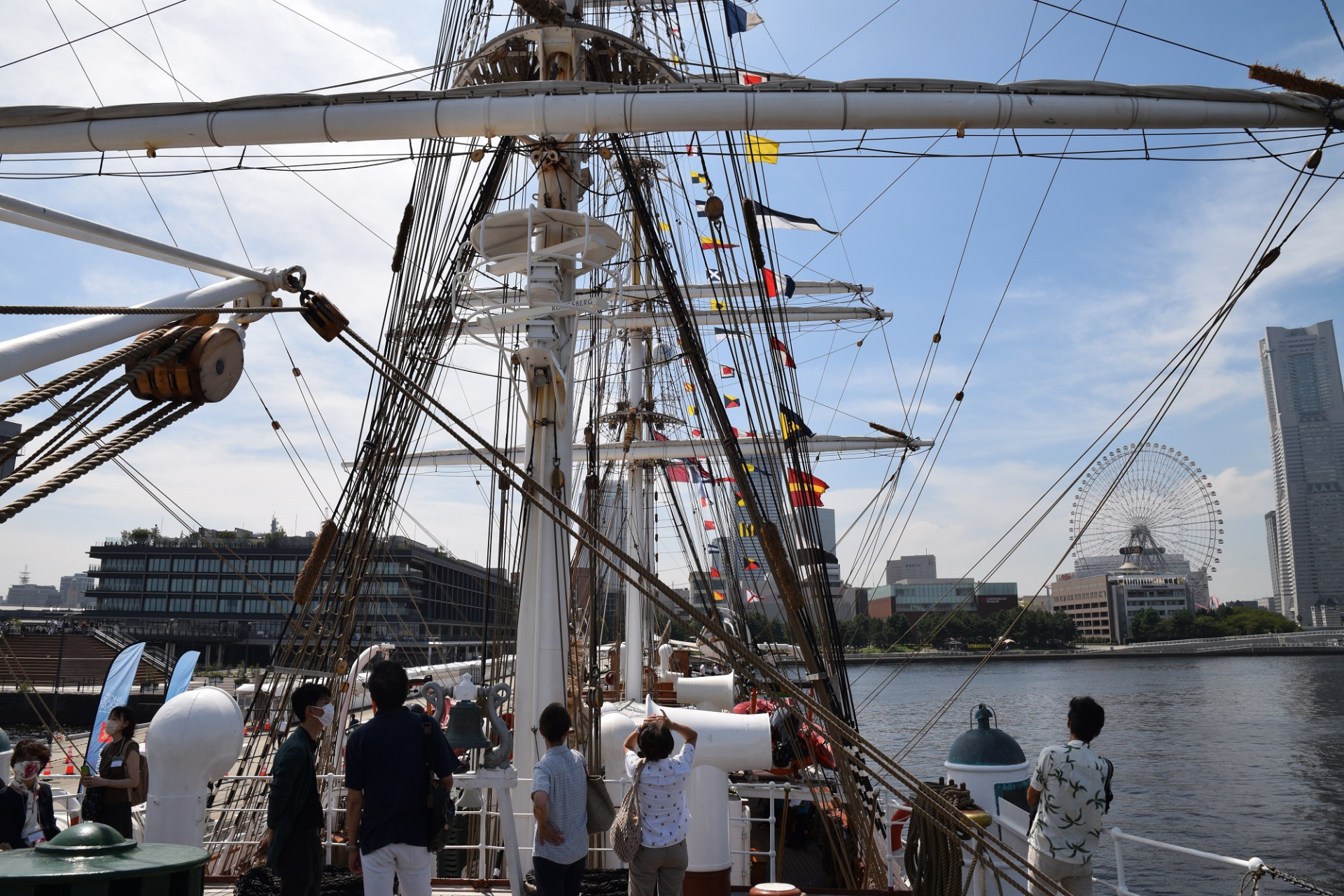 Visitors look up at the flags of countries around the world hoisted on the ropes.

Statsraad Lehmkuhl was built in Germany in 1914 and used as a training ship during World War I. In 1920, the ship was transferred to England as part of war reparations and has been in operation as a Norwegian-flagged sailing vessel since 1923. The ship is 98 meters long and has a gross weight of 1,516 tons, with 22 sails covering a total area of approximately 2,000 square meters.

On September 13, 2022, OPRI staff and the voyage participants took part in the "Open Ship" event hosted by the Norwegian Embassy on the deck of the ship. In the strong sunlight and hot and humid weather, they wore matching sky blue t-shirts and enthusiastically explained their research and studies conducted throughout the voyage. 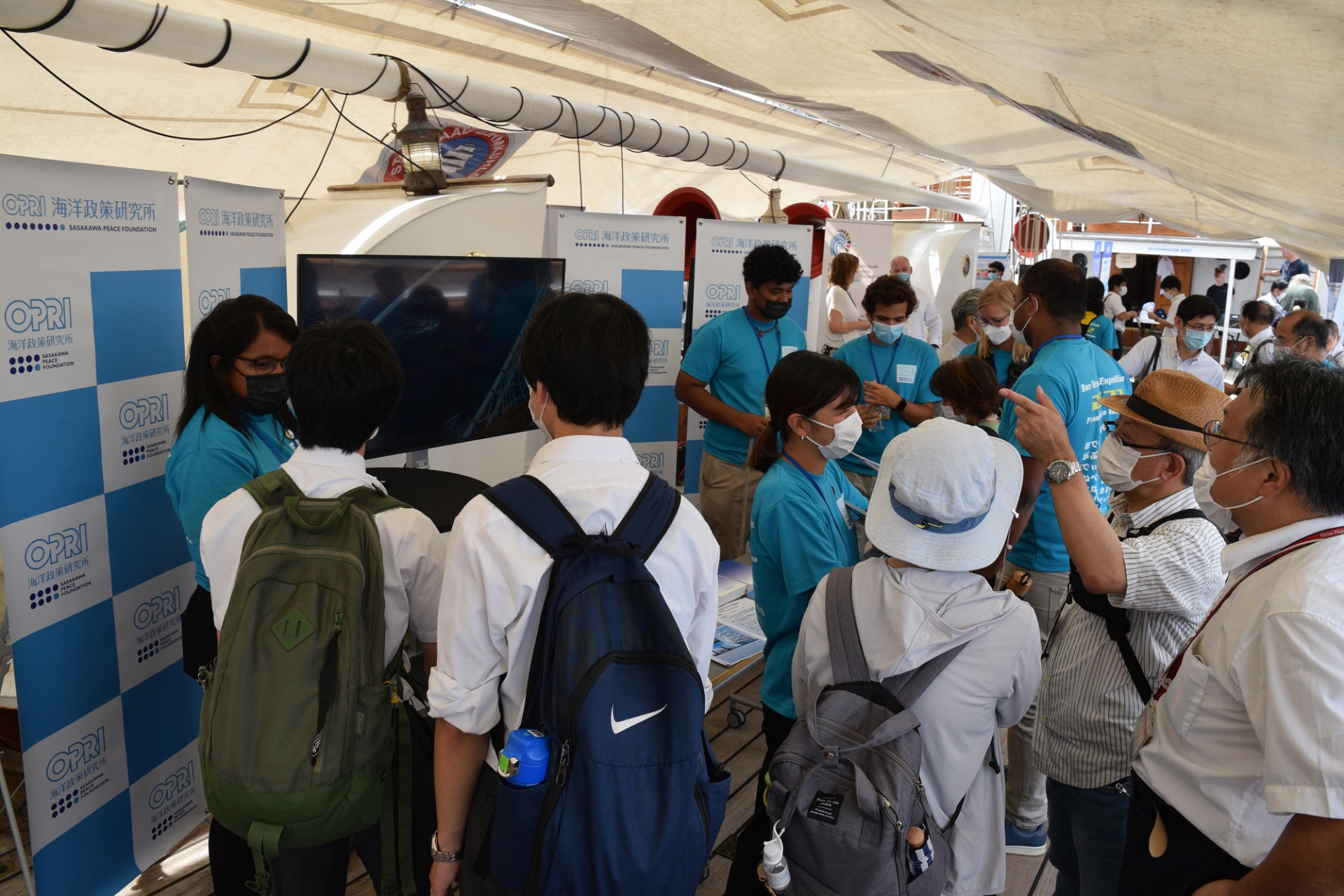 Voyage members explaining their research and studies during the voyage 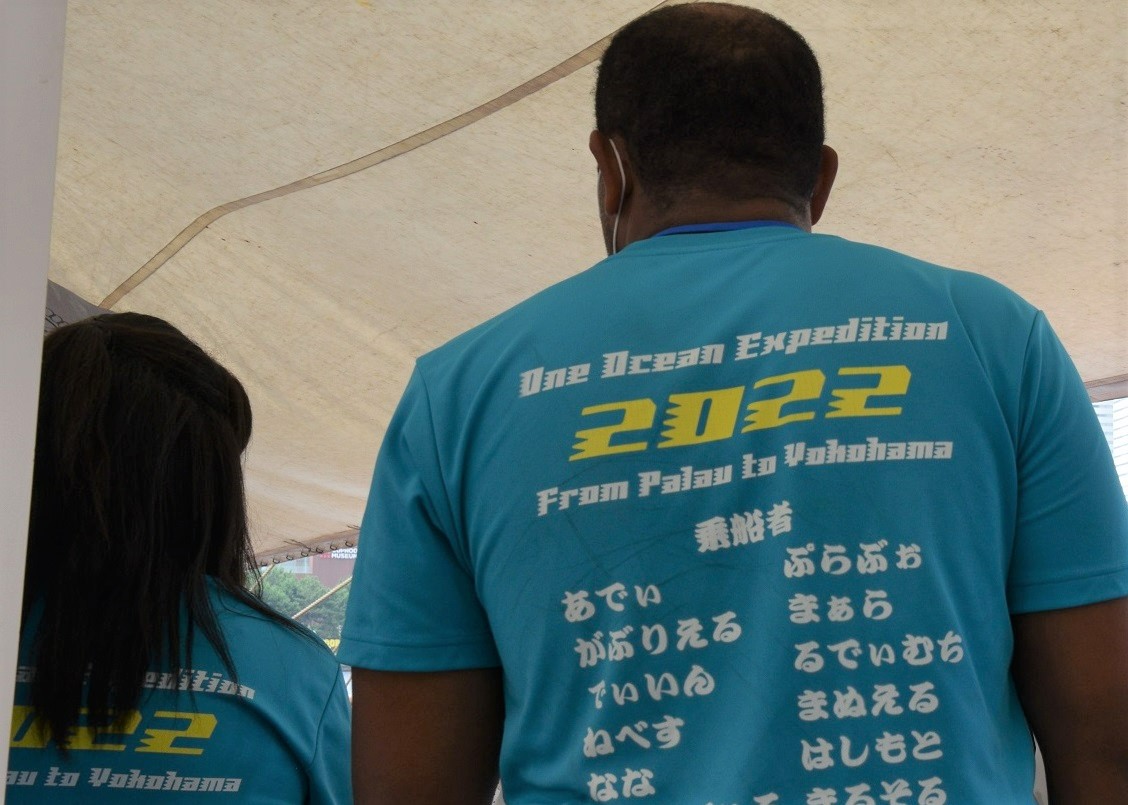 The members' names are written in hiragana on their t-shirts

Ms. Hashimoto, who participated as a youth organizer, reflected on her experience.
“I think it was a very good experience for me because I will probably never have the chance to do things like climb the mast, fold the sails, and pull the ropes together with participants from all over the world on a ship that I usually would not have the opportunity to board. I was representing SPF and participating as part of my job, and I was one of only three Japanese people on the ship, so I approached the project with a sense of responsibility as a Japanese person as well as a representative of the foundation. It was a very valuable experience to be given the role of bringing together young people from all over the world, and I feel truly honored to have had the opportunity to do so."

During the voyage, Norwegian students surveyed the ocean environment using a  conductivity (salinity), temperature, and depth (CTD) device, and researchers from the Japan Agency for Marine-Earth Science and Technology (JAMSTEC) deployed Argo floats (instruments for measuring vertical profiles of water temperature and salinity at the ocean's surface and at depths of up to 2,000 meters) at 3 different locations. "It was a very valuable experience for me to see up close how oceanographic observations are conducted. We also participated in other activities such as a lecture on the Sustainable Development Goals (SDGs). Participants were divided into teams and exchanged opinions on their areas of interest as well as ideas for how to contribute to the ocean environment. I was very impressed by the fact that everyone spoke passionately about the SDGs from a different perspective than what one might hear at an international conference," said Ms. Hashimoto.


How did these young participants perceive their experiences, such as ocean observation through the voyage?

Adi Prabowo Yudha Prajanto, a hydrography major at Bandung Institute of Technology in Indonesia, enjoys watching documentaries about the ocean and snorkeling to observe ocean life. He was once the leader of a student research group on conservation, but felt frustrated that he could not do anything about ocean issues such as plastic pollution and global warming. "The One Ocean Expedition gives me the opportunity to have some knowledge about [ocean issues] and then I can spread awareness back to Indonesia...I need people to know what happens in the ocean," he said happily.

According to marine biologist Ratabua Gabriel Selema Jacob Mara from Fiji, the ocean is not just a resource for people in Fiji, but it is their very identity. He explained his reason for participating, saying that "I’ve been working in marine conservation in Fiji. When they announced they were looking [for participants], I thought it was an amazing opportunity where I could collaborate and connect with similar-minded people from all over the world." During the voyage, they were able to share what the oceans mean to each other as they conducted research and exchanged ideas with experts and fellow youths. Although the voyage is over, he said he was glad that he had the opportunity to work with everyone. There is one ocean and it connects all of us."

We spoke with President Sakaguchi and Dr. Atsushi Watanabe, Senior Research Fellow, OPRI about the purpose of supporting this project and future efforts.

Why did OPRI support this initiative?

President Sakaguchi: People around the world, including Japan, have declared that we will be carbon neutral by 2050. However, I feel that this statement is irresponsible because by that time, many of those who made the declaration, including myself, will have retired from active service. For people in their 20s and 30s to realize this goal, we need young people to understand the problems of the oceans, and then formulate and implement solutions. In order to solve the problems of the oceans, we need to invest in the next generation of young people, polishing them like gemstones in the rough. I hope that we can make this a global movement. 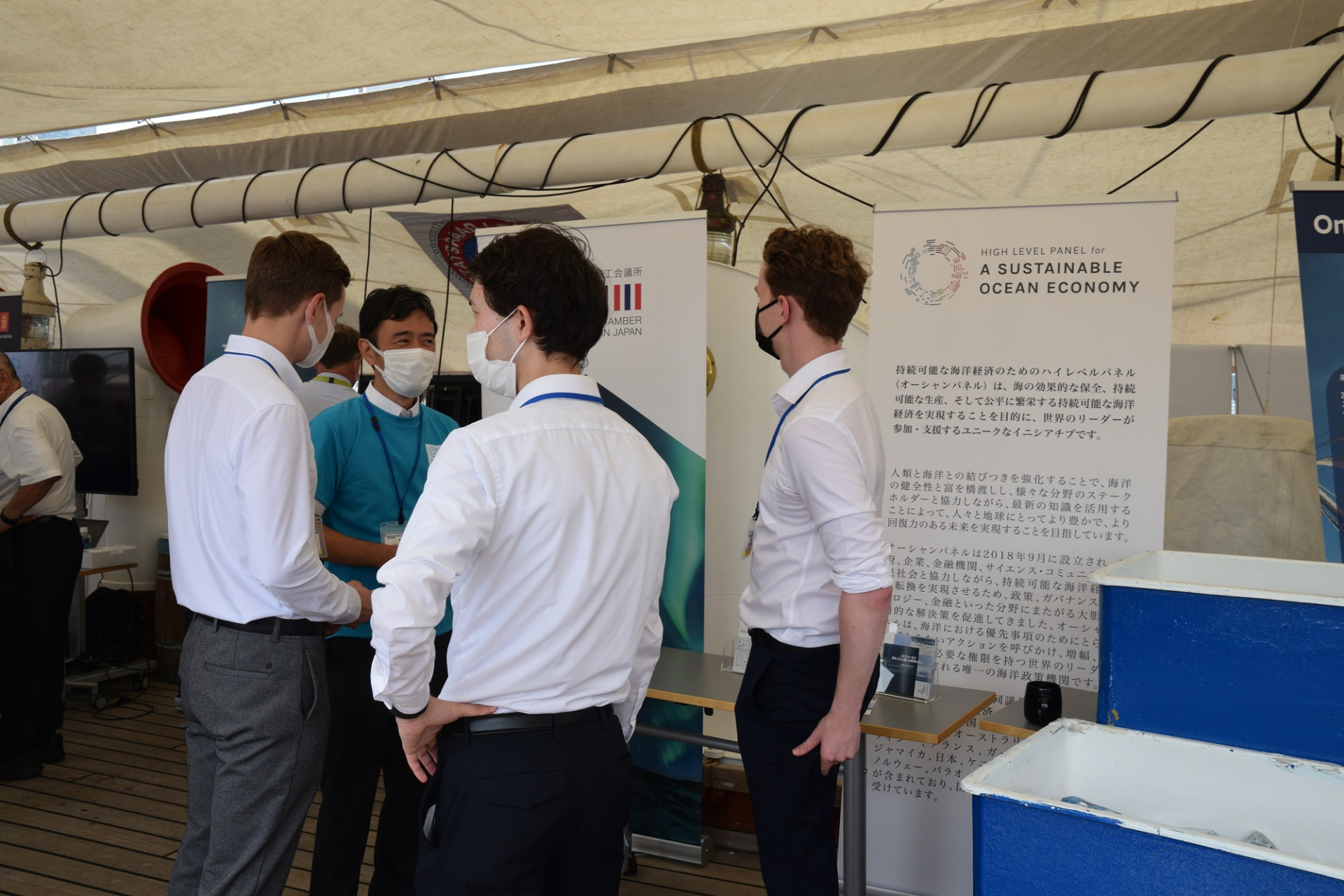 Dr. Watanabe, Senior Research Fellow (second from left) talking with people from the Norwegian Chamber of Commerce in Japan

What is needed to solve the problems of the oceans?

Dr. Watanabe: We all need to think about how the oceans are in danger and work solve the problem over the next 10 years, starting in 2021, as part of the UN Decade of Ocean Science. We need to think about the food crisis and challenges posed by climate change, and then consider how the oceans can provide possible solutions. It is important to nurture and make sure that people in their 20s and 30s today, who will be at the center of changing the world in 2030, understand these issues. I thought this was a very good opportunity for young people from various countries to experience this type of voyage, and also to cooperate in an international effort to conduct oceanographic observations from Palau to Yokohama, deepening their understanding of ocean conditions and ocean science.
Please tell us about your future plans.

President Sakaguchi: In the future, we would like to invite about 100 young people each year through various initiatives. This means that over the next 10 years or so, we can support up about 1,000 people. I strongly believe that initiatives like these are critical to help young people learn about the challenges facing the ocean, and work together to consider strategies to contend with these issues. These young people will never forget their experience even after this voyage is over. It is very important to make family and friends around the world.

Dr. Watanabe: I would like to take advantage of the network of young people we have created through this voyage. I hope that they will recognize OPRI as an organization that supports these kinds of activities and I hope we can provide similar opportunities in the future as well. We would like to pursue initiatives that only a private foundation can undertake, like supporting the participation of young people from developing countries in initiatives that only developed countries can manage, such as deep-sea research using a submersible research vessel.

On August 26, 2020, the Ocean Policy Research Institute (OPRI) of the Sasakawa Peace Foundation (SPF) hosted a webinar with The Nippon Foundation and The Economist Group on "Economic Revitalization through Science, Innovation and Ocean Infrastructure.”

The “indispensable” strategic partnership between Japan and Australia

OPRI-SPF welcomed the Honorable Richard Marles, Australian Deputy Prime Minister and Minister of Defence, to the foundation for a discussion about deepening Japan-Australia ties in the face of shared security challenges in the Indo-Pacific region.