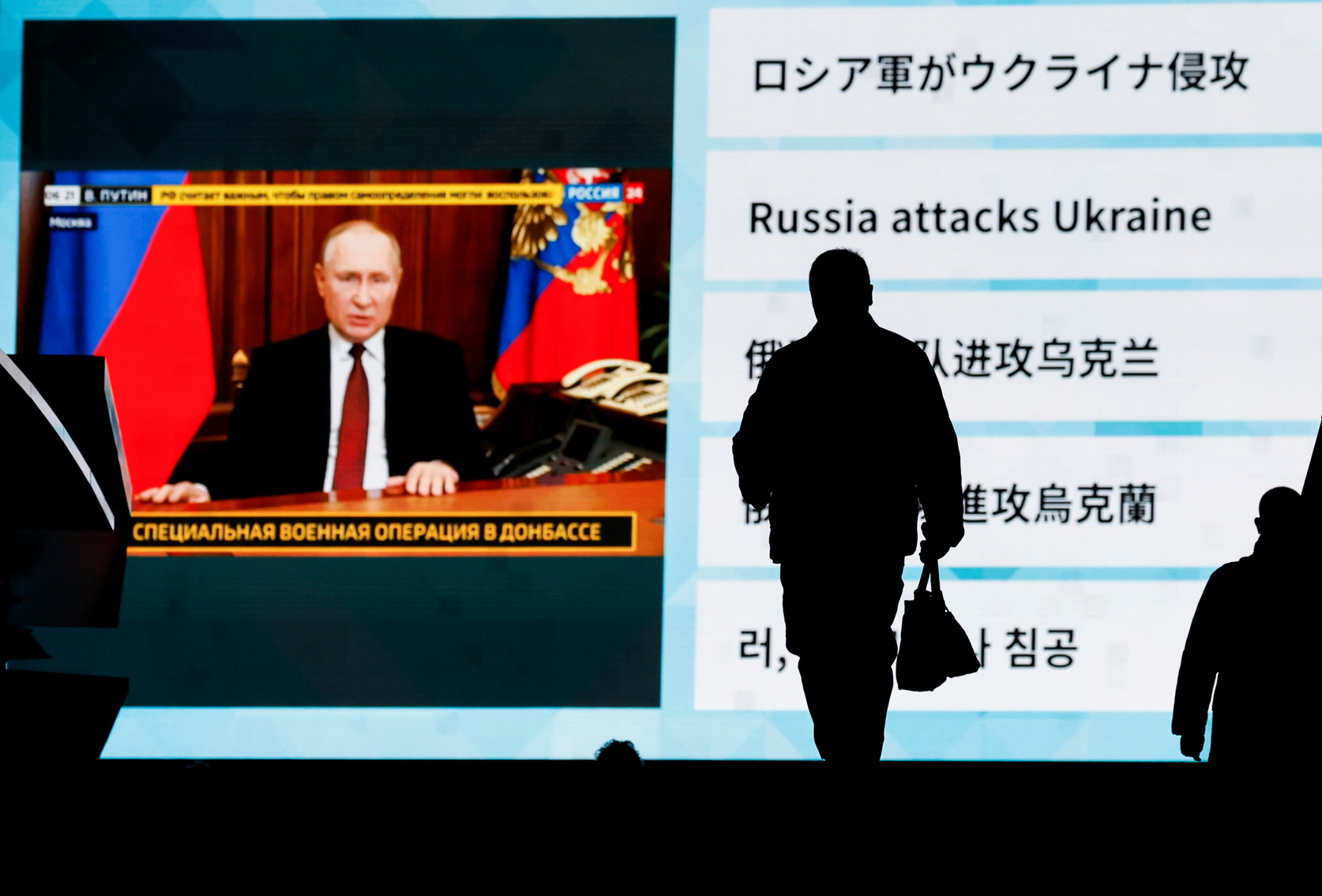 An announcement of Russia's attack on Ukraine as seen in Tokyo on February 24, 2022 (Photo credit: REUTERS / ISSEI KATO - stock.adobe.com)

Share
On February 24, 2022, Russia shocked the world by invading Ukraine, drawing Europe into armed conflict and undermining the stability of the post WWII international order. To examine the profound implications of this conflict not only in Europe but also around the world, the Security Studies Program of the Sasakawa Peace Foundation (SPF) in collaboration with the Institute for Foreign Affairs and Trade (IFAT), a Hungarian think tank, held an online event entitled “Ukraine Crisis and International Prospects – Perspectives from Japan, Perspectives from Europe –.”

Hungary, as a NATO member country that shares a border with Ukraine, finds itself at the frontlines of the military and humanitarian crisis unfolding across Europe. Japan, while geographically far from the fighting, remains committed to upholding the international rules-based order as one of NATO’s “partners across the globe.” Further raising the stakes, countries including China appear to be watching the international reaction to Russia’s actions, potentially bringing the fallout from the conflict to East Asia.

To bring together perspectives from central Europe and East Asia, this event welcomed a panel of experts from Hungary and Japan for frank discussions regarding the security challenges facing both regions in light of Russia’s actions.

SPF Executive Director Junko Chano kicked off the event, noting that the “unilateral aggression by Russia may shake the foundation of the international order that has been well established after WWII.” She also asserted that Japan, as the only country to have suffered from atomic bombings, understands that Russia’s threat to use nuclear weapons would be “impermissible,” and she expressed her hope for a swift resolution to the crisis.

Dr. Márton Ugrósdy, director of IFAT, agreed that “these are perilous times that we’re facing right now.” He commended the united stance of NATO and the EU in condemning the attack, and noted that countries across the region have welcomed the influx of Ukrainians fleeing the conflict, including Hungary, which has taken in more than 200,000 refugees. Looking forward, he asserted that this conflict will test democratic countries’ resolve to respond to Russia’s unilateral actions.

Dr. Peter Stepper, a senior research fellow and head of the Euroatlantic Program at IFAT, delivered the first presentation of the event, covering the overall timeline of the invasion, the impact on Hungary, and the potential strategic implications worldwide. While a swift resolution to the conflict appears unlikely, Dr. Stepper argued that the worst-case scenario would be Ukraine separating into a de facto east and west. “This strategic outcome would means years of fighting ahead of us and could severely damage the whole European economic structure,” he explained.

He also noted that Hungary is in a difficult economic position due to the lingering effects of the COVID-19 pandemic as well as the country’s reliance on Russian energy. However, on the military and political side, he underscored that “NATO and the EU is an ironclad alliance, and Hungary is a country that is very committed to all of these alliances, the U.S., and the west in general...That’s what we expect to continue.”

Next, Retired Lieutenant General Jun Nagashima brought in the Indo-Pacific perspective. As a result of the attack on Ukraine, Russia has isolated itself from the international community and is now seeking a closer relationship with China. General Nagashima noted that in recent years, China and Russia have strengthened their strategic cooperation, which is “elevating the tension in East Asia and in the end reducing the presence of the U.S. in the Indo-Pacific.”

He also argued that Russia and China are exploring ways to integrate military and nonmilitary strategies into a novel form of hybrid warfare, posing an increasing threat to Japan and requiring the country to shore up its defense capabilities and partnerships. “We have to further strengthen the solidarity between Japan and the U.S. through the alliance and with Australia, ROK, and NATO partner countries including Hungary, and we need to make such framework visible in this region,” he explained.

The participants from Hungary and Japan held a frank discussion about the security implications of Russia's attack on Ukraine.

In the next presentation, Dr. Ken Jimbo, professor at the Graduate School of Media and Governance at Keio University, described the Russian invasion of Ukraine as a “watershed” moment in international affairs that will reshape the security landscape. He argued that Russia’s indirect threats of nuclear conflict have been “very effective in deterring the United States and other countries,” which has the potential to influence China’s military strategy regarding Taiwan. While Ukraine and Taiwan are vastly different security environments and the deterrence presence of the U.S. is different in each country, Dr. Jimbo argued that China, itself a nuclear power, could see threatening to use nuclear weapons as a viable strategy.

At the same time, he asserted that the fierce resistance by Ukrainian fighters “is engraved in the minds of the Chinese leadership,” arguing that another lesson China may take from this crisis is that “it is very difficult to wage a war when you underestimate your opponent.” He concluded by noting that he will be looking at how Japan may reclassify Russia as a security threat in the new national security strategy to be released later in 2022.

Dr. Péter Wagner, senior research fellow at IFAT, provided a response to the presentations. He took a broader look at NATO’s policy toward deterrence, which he argued has not been adequately discussed in Europe over the past 30 years. “The United States was a unipolar hegemon and we had other issues – counterinsurgency, terrorism, counterterrorism, and humanitarian crises. Now, with this conflict, I think that NATO politicians and European politicians will have to relearn this behavior of how to work and how to deal with a nuclear power opponent…This will really change the mentality within Europe.”

The panelists also fielded questions from the audience on topics including the positions of Hungary and Japan regarding the role of the U.S. in the conflict and potential changes in Hungarian foreign policy as a result of Russia’s invasion. The discussions also touched on why western countries have avoided direct military intervention, namely because Ukraine is not a member of NATO and cannot trigger the collective defense obligations.

SPF Senior Fellow Bonji Ohara concluded the event by noting that this seminar provided a critical step toward greater understanding between Hungary and Japan. “Japan and Europe must cooperate otherwise the world order might be changed through force. We cannot deal with this unless we unite. We should continue to try to understand the thinking in Europe, and we hope you will try to understand our thinking here in Japan.”
Security Studies Program Northeast Asia Europe and Eurasia
Share

On June 17, 2020, the International Peace and Security Department of the Sasakawa Peace Foundation (SPF) held an online briefing to present a new policy recommendation entitled “Japan’s Contribution to Global Nuclear Disarmament and Non-Proliferation: Toward a Policy for Fulfilling the Responsibilities of Japan as the Only Country to Have Suffered From Atomic Bombs.”

To bring together perspectives from central Europe and East Asia, this event welcomed a panel of security experts from Hungary and Japan for frank discussions regarding the security challenges facing both regions in light of Russia’s actions.

SPF Visiting Fellow Darshana Baruah discussed the strategic significance of islands in the Indo-Pacific framework and the outlook for great power competition in the Indian Ocean.