Afghanistan’s past, present, and future

September 9, 2021
9 Min. Read
The world has been rocked by the cascade of events in Afghanistan. As the U.S. military ended its two-decade presence in the country, the Taliban swept across Afghanistan in a swift return to power unforeseen by the international community, triggering a global scramble to evacuate personnel and Afghan citizens seeking to leave the country.

With the volatile conditions continuing on the ground, the Asia Peace Initiatives Department of the Sasakawa Peace Foundation (SPF) in cooperation with "Connectivity and Trust Building in Islamic Civilization" MEXT Grant-in-Aid for Transformative Research Areas (A) and the NGO Japan Platform (JPF) organized an urgent seminar entitled “2021 Political Change in Afghanistan and International Society.” The online event was held on August 31, 2021 – the same day the U.S. military completed its withdrawal from Afghanistan – and welcomed a panel of experts and officials to discuss the historical context and profound implications of recent events as well as consider the potential role for Japan.

“The world over is in great shock because of what is happening in Afghanistan,” said SPF President Atsushi Sunami to open the event. Given the uncertainty facing many on the ground, he underscored the foundation’s intention to remain engaged in discussions about how to support Afghanistan from the perspective of peacebuilding and peace mediation, inclusivity, and promoting understanding of Islam, all of which are central elements to SPF’s projects.

Asia Peace Initiatives Department Senior Program Officer Akiko Horiba, who works on SPF’s peace mediation efforts in Southern Thailand, also reiterated the foundation’s commitment to pursuing study groups, seminars, and other efforts to deepen the understanding and awareness of the humanitarian, geopolitical, and security ramifications of the events unfolding in Afghanistan.

The first of the four main speakers, Professor Koichiro Tanaka from the Graduate School of Media and Governance at Keio University, provided a comprehensive view of the Taliban in Afghanistan, tracing their trajectory after the U.S.-led invasion in 2001 through to their reemergence and return to power on the heels of the U.S. military withdrawal. While many disparate political and militant groups acted as self-proclaimed Taliban combatants over the past two decades, Professor Tanaka said that the so-called “Taliban 2021” has become united under a broad two-part mission: to “liberate Afghanistan from the yoke of occupation armies” and to “resurrect the Islamic state based on Sharia.”

However, Professor Tanaka pointed to an inherent conflict between the Taliban’s desire to create an Islamic state based on Sharia and their quest for legitimacy on the global stage, including a seat in the UN General Assembly. While the Taliban’s initial statements hint at a relaxing of previous hardline positions, he argued that a fundamental shift in their attitude is unlikely. Softening their stance on Sharia could weaken the founding of an Islamic state and undermine the philosophy linking together members of the Taliban. 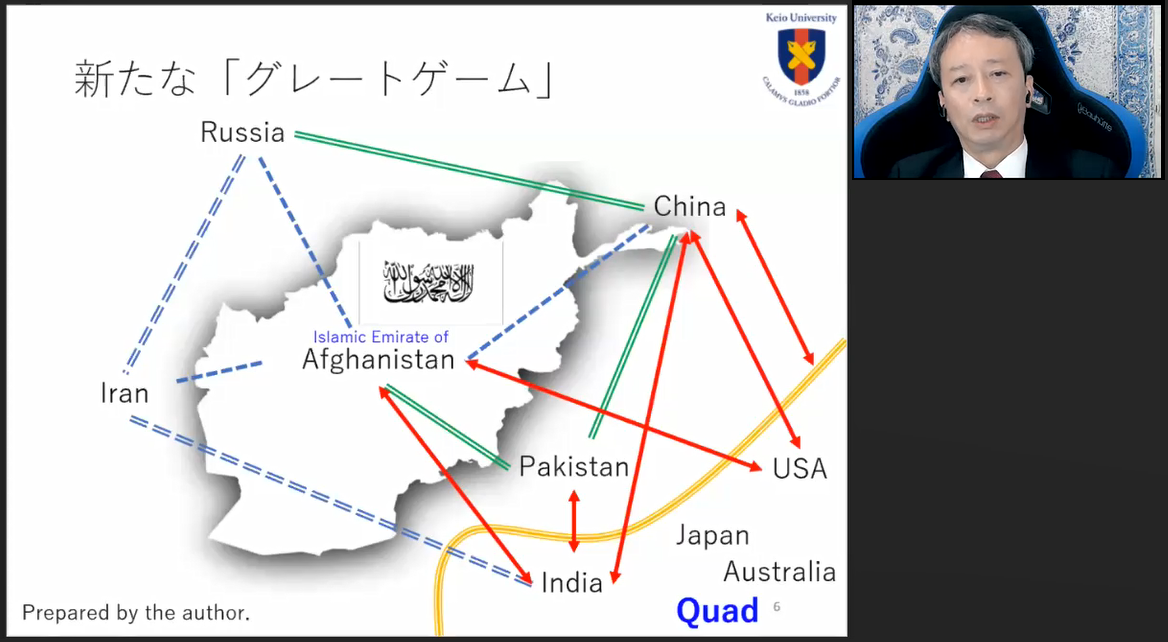 “They need international aid, so their façade has to be very soft...But in terms of essence, they are not different than the past,” he argued. He also warned that while the leadership had not yet been officially announced, veteran militants have emerged in positions of power. “The future direction of the Taliban is something for us to be concerned about going forward.”

Next, Mr. Tadamichi Yamamoto, former UN Secretary-General Special Representative for Afghanistan and head of the UN Assistance Mission in Afghanistan (UNAMA), considered the reasons behind the rapid collapse of the Ghani administration that allowed the Taliban to seize power and underscored the critical role of the international community to exert pressure on the Taliban to follow through on their promises of reform.

While the withdrawal of U.S. forces from the country was a major driver behind the sudden collapse of the Ghani administration and failure of the Afghan military to repel the Taliban, Mr. Yamamoto also described the long-standing challenge of establishing a legitimate, overarching political authority in Afghanistan, a diverse and multi-ethnic nation with powerful local tribal leaders throughout the different provinces. 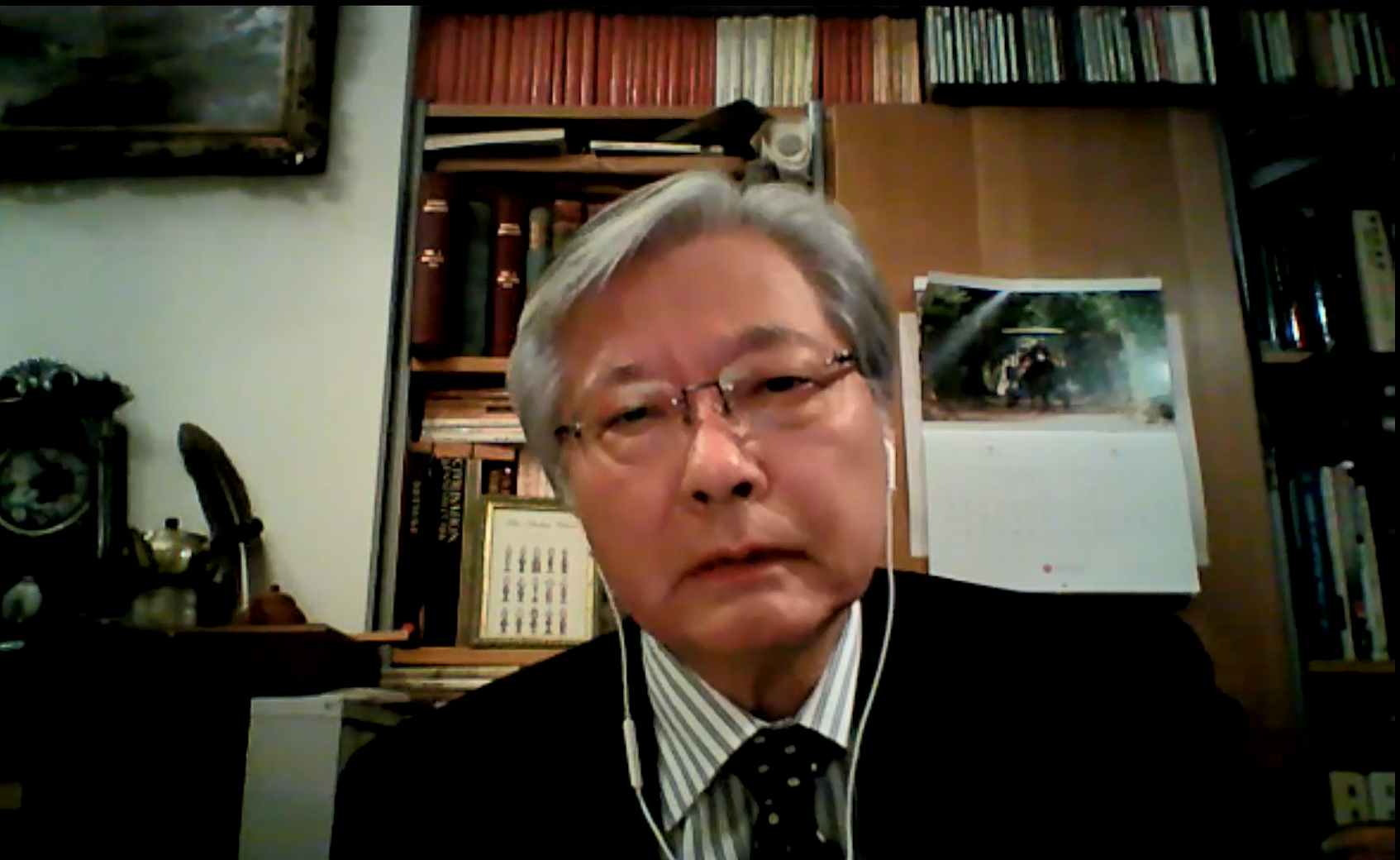 This lack of political unity was exacerbated under the leadership of President Ghani, who was seen as aiming to modernize the country without building consensus among local leaders. Further undermining the legitimacy of the government, corruption among political leaders spiraled out of control as vast amounts of aid money flowed into Afghanistan. “The disparity between the haves and the have nots widened, and the Afghan people came to distrust the government,” he explained.
While Afghanistan is now facing uncertainty with the return to Taliban rule, Mr. Yamamoto maintained that the central goals of the original peace talks remain unchanged. These include the aim “to represent the people of Afghanistan, to ensure the dignity of the people and respect the rights of women and minorities, to ensure that Afghanistan will not be a threat to surrounding countries, and to create a prosperous Afghanistan.” He acknowledged the Taliban’s recent statements about providing amnesty and pardons, but also urged the Taliban to demonstrate that their “words and deeds match so that they can gain the trust of the people.”

Next, Mr. Takeshi Komino, General Secretary of Church World Service (CWS) Japan and founder of Japan Platform (JPF) provided an overview of the current humanitarian situation on the ground in Afghanistan based on his involvement with assistance activities beginning in 2003. In Afghanistan, where the population reaches just over 40 million people, nearly half are in need of humanitarian assistance and over 90% of people subsist on less than 2 USD per day. 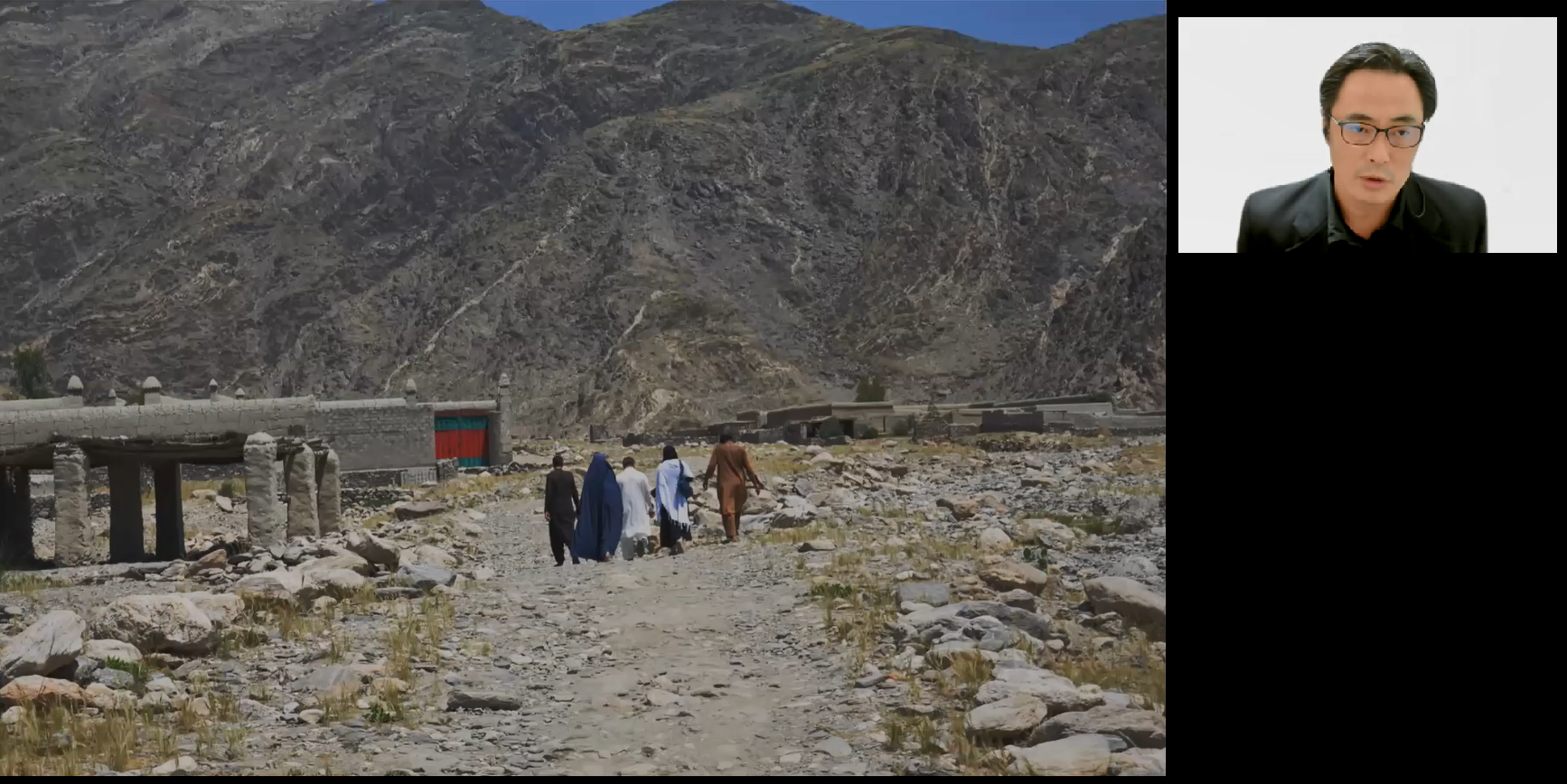 Further, extreme drought, the COVID-19 pandemic, and widespread displacement due to conflict has exacerbated the humanitarian need. Given these dire circumstances, disruption in international assistance could have catastrophic consequences. “Looking at the statements by various assistance organizations, they are sounding the alarm bells,” he warned.

Mr. Komino proposed that Japan and the international community have a responsibility to take an active role to respond to the immediate crisis and the longer term needs. While ultimately the progress in Afghanistan is driven by Afghan citizens, he reiterated that Japan “will not abandon the Afghan people” and argued that “many Afghans are showing leadership, so we must amplify their leadership by our assistance.”

The final speaker was H.E. Dr. Shaida Mohammad Abdali, the Ambassador of Afghanistan to Japan, who gave remarks from the embassy in Tokyo where he is continuing his work. He began by noting that Japan has been an active partner to Afghanistan, providing 7 billion USD in assistance in 2012 and supporting development projects including the construction of schools, medical facilities, and educational exchanges as one of the largest international donors to Afghanistan.

However, he painted a dire picture of the current state of the country following the U.S. withdrawal and dissolution of the central government, using the analogy of “Afghanistan being a patient on life support abandoned in the middle of treatment.” At the same time, he also outlined a pragmatic stance that requires Afghanistan “to deal with the new reality and hold on to our shared values and gains.” 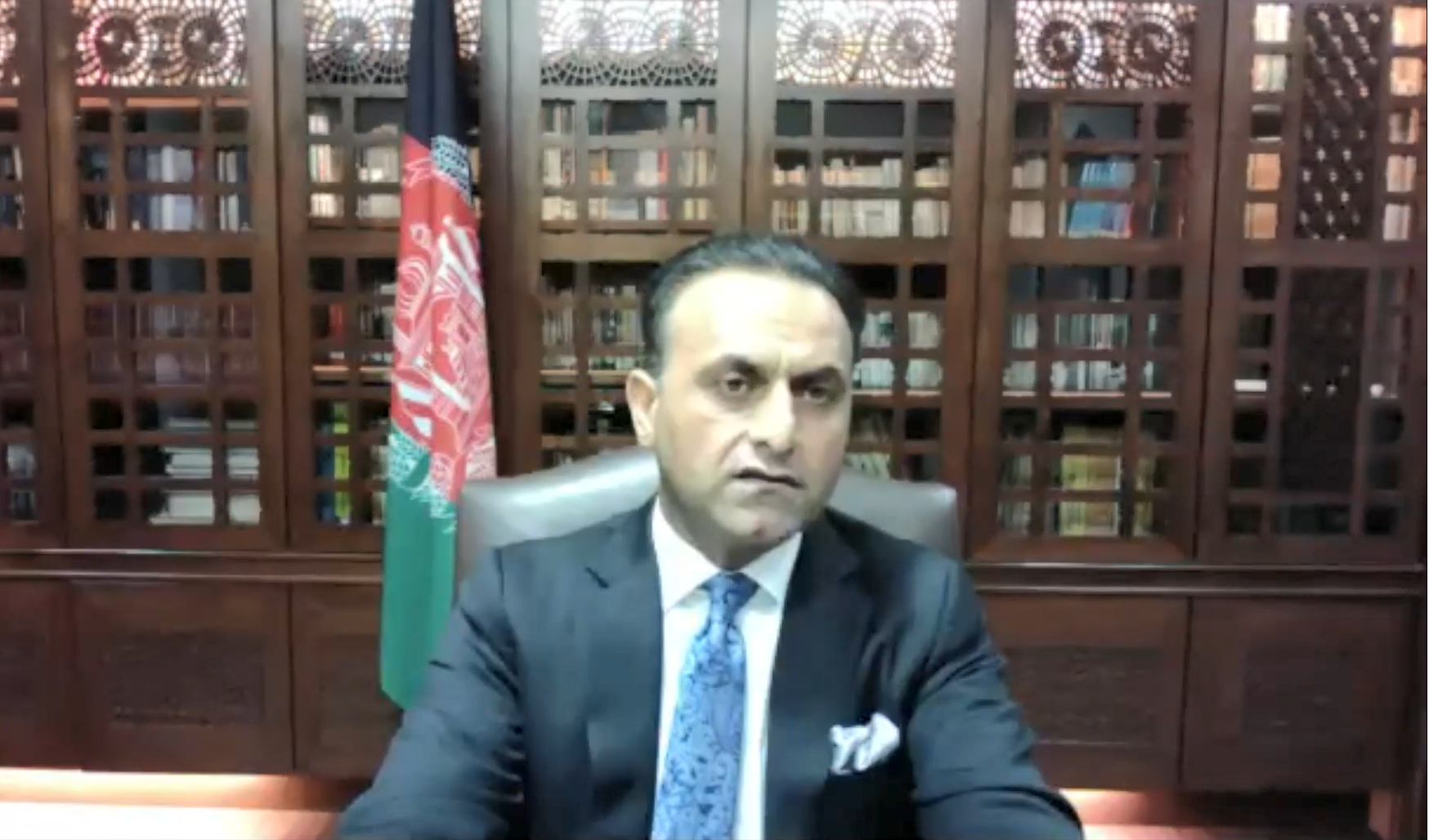 To this end, he argued that the ultimate goal must be “the formation of an inclusive new Afghan government that is acceptable to Afghans as well as the international community.” Given the instability on the ground, he also called for emergency aid for the Afghan people to be channeled through the UN and international NGOs. He proposed a role for Japan in collecting international assistance and guiding this support, calling Japan “well positioned to lead those efforts.”
At the same time, he also warned of a future in which tensions between regional powers stymie collective efforts to combat the terrorist threat, allowing groups like ISIS and others to reemerge. “Let’s not forget the dangers that an unstable Afghanistan can pose to the region and the world once again,” he said, arguing that “the cost of saving Afghanistan today is much less than the cost of saving Afghanistan later.”

During the Q&A session, moderated by Professor Masako Ishii, professor at Rikkyo University and JPF Board Member, the discussions covered a range of topics including the potential administrative organization of the Taliban, the challenges of quashing corruption, and the thoughts and concerns of people living in Afghanistan.

One question posed to Mr. Yamamoto wondered whether the international community would be able to set aside geopolitical disagreements in order to present a united message to the Taliban. Mr. Yamamoto conceded that while each country has its own perspective, major players including the U.S., Russia, and China – all permanent members on the UN Security Council – have an interest in a stable Afghanistan, allowing them to unite behind the shared goal of supporting peaceful dialogue to stand up an inclusive government.

The conversation also turned to the voices of people experiencing these events on the ground. Mr. Komino explained that while the perspectives vary, he has heard worry and anxiety over the new Taliban authority. While some he said have lost hope or want to seek refuge abroad, he also pointed to others who have set their sights on rebuilding the country. “There are people evacuating abroad, but many of brightest people are coming back. Together with them, [Japan] must respect their leadership and work by their rules and depending on their leadership. Then [the progress in Afghanistan] will never go back to zero.”

Ambassador Abdali agreed, stating that “when the transition was complete in 2014, it was based on Afghanistan’s capacity, and that capacity still exists.” He pointed to educated Afghans who have stayed in the country, the trained armed forces, and the potential for progress should the promise of an inclusive government be realized. “Definitely, it is sad to see this kind of situation abruptly happening in Afghanistan, but it’s still not too late to rescue most of the achievements of the last 20 years.”

On October 20, 2022, SPF was thrilled to welcome the Honorable Hillary Rodham Clinton, former U.S. Secretary of State, and Ms. Izumi Nakamitsu, UN Under-Secretary-General and High Representative for Disarmament Affairs, for a discussion at the foundation focusing on gender equality.

Afghanistan’s past, present, and future: SPF expert seminar on the Taliban’s return to power and the role for the international community

This online event welcomed a panel of experts and officials to discuss the historical context and profound implications of recent events as well as consider the potential role for Japan.