A spring for documentary filmmaking in Northeast India

As a continuation of this program, YIDFF arranged for a special screening of the films to be held in Tokyo from November 7 to December 11, 2020. While the coronavirus moved this new festival online, audiences in Japan still had the opportunity to see the array of films providing a view into the diverse landscape of Northeast India through the lens of some of the most revered documentary filmmakers in the region as well as the next generation of creators.

Alongside the online screening, the festival welcomed two young directors, Mr. Mukul Haloi and Mr. Oinam Doren, for an in-depth discussion led by Mr. Tarun Bhartiya, himself a documentary filmmaker and one of the minds behind the Northeast India AV Archive at St. Anthony’s College in Shillong, Meghalaya. Their conversation spanned from discussions about the inspiration for their documentary films, a shared admiration for Japanese cinema, and musings about the future of documentary filmmaking in Northeast India.

To watch the full interview and view other videos including a discussion about the Northeast India AV Archive, please visit the YIDFF video page.

“Usually when people talk about Northeast India, they talk about it as a sociological or an anthropological category, not as a place which is culturally active and is producing fascinating culture, films, and music,” said Mr. Bhartiya to open up the conversation. He went on to say that in the 2019 YIDFF, some of the films that had the most impact in the special program were those made by the younger directors, including Mr. Haloi and Mr. Doren.

Mr. Haloi’s film “Tales from Our Childhood” was created by piecing together the fragmented memories of the director’s boyhood in the 1990s set against the violent insurgency that roiled his home state of Assam. Rather than providing a removed retelling of the events focusing on the participants in the conflict, Mr. Haloi said he felt drawn to a more personal vision, telling the story through the eyes of his mother, his father, and his friends. “When I started editing the film, I realized this film it was not about the movement or the organizations who were heading the movement. It’s more about the people who have witnessed it,” he explained.

Mr. Doren’s film, “Songs of Mashangva,” found inspiration in the director’s love of music. The film follows folk musician Rewben Mashangva on a two-year tour across India and through remote villages of Tangkhul Naga in the state of Manipur. “I thought folk music was for rural people who are not progressive,” said Mr. Doren, saying he preferred the fancy jeans, t-shirts, and long hair of the western rock and pop stars that filled the posters on his walls. “But then I heard Rewben’s album Tantivy and learned that folk music can be very interesting and in a modern package...Listening to Rewben’s music I could see glimpses of life in the village.”

While both Mr. Doren and the subject of his documentary are from the state of Manipur, Rewben is a member of the Tangkhul Naga people hailing from the hill region and Mr. Doren is a member of the Meitei people from the valley. During the conversation, when Mr. Bhartiya asked about the experience of transcending the sharp cultural borders within Manipur, Mr. Doren recalled that “in the beginning [Rewben and I] used to go at it a lot, to debate a lot, and fight a lot...But I was lucky that I was doing something I was very passionate about, so I was not ready to give up and I stayed with him for two years, and it opened up a whole new world to the life of that community...I think the film also opened up a new mindset for the people among my friend circle in the valley. I think the film did a lot of things not only for Rewben and for me as a filmmaker, but for the two communities.” 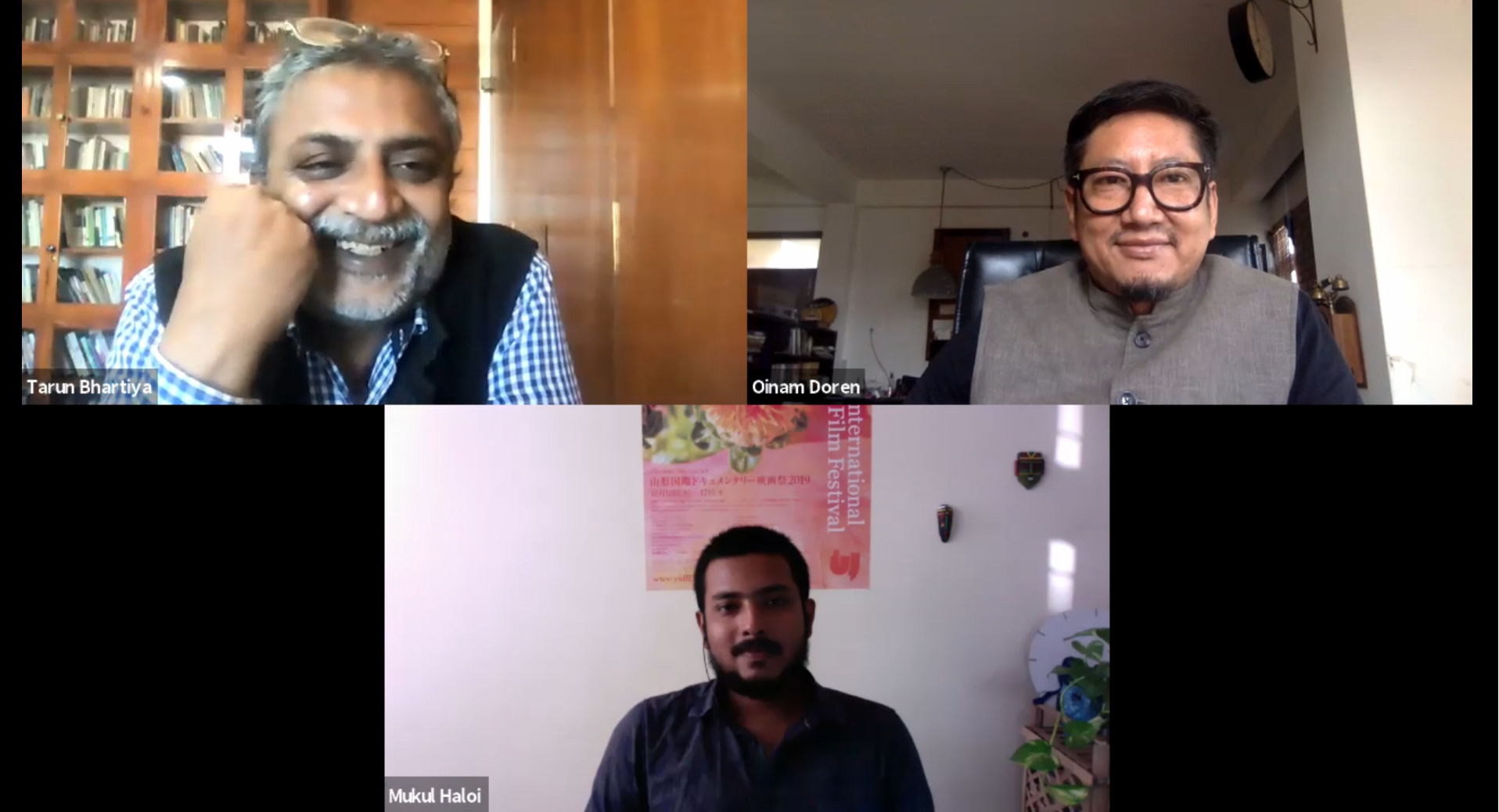 The conversation between the three directors also turned to the future of documentary filmmaking in general as well as in Northeast India specifically. When discussing potential themes to be explored through documentary filmmaking, Mr. Haloi noted that “we are not moving with the time, we are not aware of the time changing in the region, and there are quite dangerous things happening from politics to nature to culture. The general way of being is changing and it’s influenced by a lot of things, so I feel as a filmmaker I would want to document this time...documenting the changes that aren’t visible from the outside but when you're from the place you can see how the culture changes and how people's behavior changes because of socio religious political interactions.”

He also said that while many filmmakers and people from Northeast India have focused on their heritage, which in some cases may lead to divisions and possible conflict, it is also vital that films place the director and the audience in the present with an eye toward the future.

SPF and KW Publishers hosted a special event in New Delhi to celebrate the publication of the first-ever English translation of The Battles of Imphal and Kohima: Japanese Operations in Northeast India, an excerpt from the Senshi Sosho, the official Japanese record for its military involvement in WWII.

Establishment of a "Human Rights Grievance Mechanism" is Needed Urgently

The Asia Peace Initiatives Program of the Sasakawa Peace Foundation held the online webinar “Engagement & Remedy Forum for Responsible Business Conduct 2021" on February 26, 2021. The webinar discussed the significance of "grievance mechanisms" (a process and system for handling complaints and resolving problems) to provide remedy to workers and others from human rights violations arising from corporate activities.

Event celebrates the museum as a landmark of remembrance and reconciliation, premieres video collection of testimonies by community members who lived through the Battle of Imphal and Battle of Kohima