Interview with Cate Buchanan, Mediation and Process Design Specialist and Specialist Editor for Accord 29

Cate Buchanan is a mediation and process design specialist who works across many organizations including the UN Special Envoy office as well as nongovernmental organizations such as the Centre for Humanitarian Dialogue, Conciliation Resources (CR), and others. In her capacity as the Specialist Editor for the most recent publication of CR's Accord, an acclaimed journal series that highlights new analysis of peace processes, Ms. Buchanan shared with SPF the primary themes from the latest publication and her thoughts on the role for organizations like SPF as well as Japan more broadly in supporting peace initiatives around the world. Comments have been lightly edited for length and clarity.

For those who might be unfamiliar, what is the concept of peace mediation support?

Peace mediation is a discipline and a sector that has evolved over the last 20 years in particular. It is a mixture of international organizations including the UN, regional organizations such as the European Union and the African Union, international nongovernmental organizations, and what we call pro-peace or pro-mediation states such as Switzerland, Norway and others, who all come together to form a community of practice that works to support peacemaking in different ways.

Peacemaking specifically refers to all the efforts and initiatives that might be undertaken to support conflict parties or warring parties, which are typically governments, militaries, armed groups, to come to some kind of negotiated settlement.

In the last 20 years, we've seen a huge rise of actors in this space, and increasingly we see more private diplomacy and international NGOs in this space. Private diplomacy refers to non-UN or non-state actors who are involved in providing mediation or mediation support. These are organizations that typically are designed to be nimble and agile, so they are very proactive and try to seize opportunities and make opportunities to bring warring parties to the negotiating table.

With that background in mind, can you give us a rundown of some of the primary themes and conclusions that came out of the most recent Accord publication?

The Accord this time is number 29 in the long running series that Conciliation Resources, a UK-based international nongovernment peace organization, has produced for the past 25 years. The Accord is regarded as one of the sector’s leading analytical resources because it brings together perspectives from analysts, practitioners, donors, conflict parties, and civil society in a lively blend of different voices and perspectives.

This Accord focuses on what we call early or pre-formal peacemaking, which include phases that are often very difficult to pinpoint, quite opaque, and very nebulous. There are many things that are going on behind the scenes that are very discrete and often very confidential. In some contexts, this work is denied because conflict parties are uncomfortable or not ready to be seen talking with each other, and certainly not negotiating with each other.

These early and formal performative phases focus on trying to nurture and create the space, confidence, and trust among conflict parties and other influencers including civil society members, business people, and religious leaders, in order to promote peace and the value of dialogue. 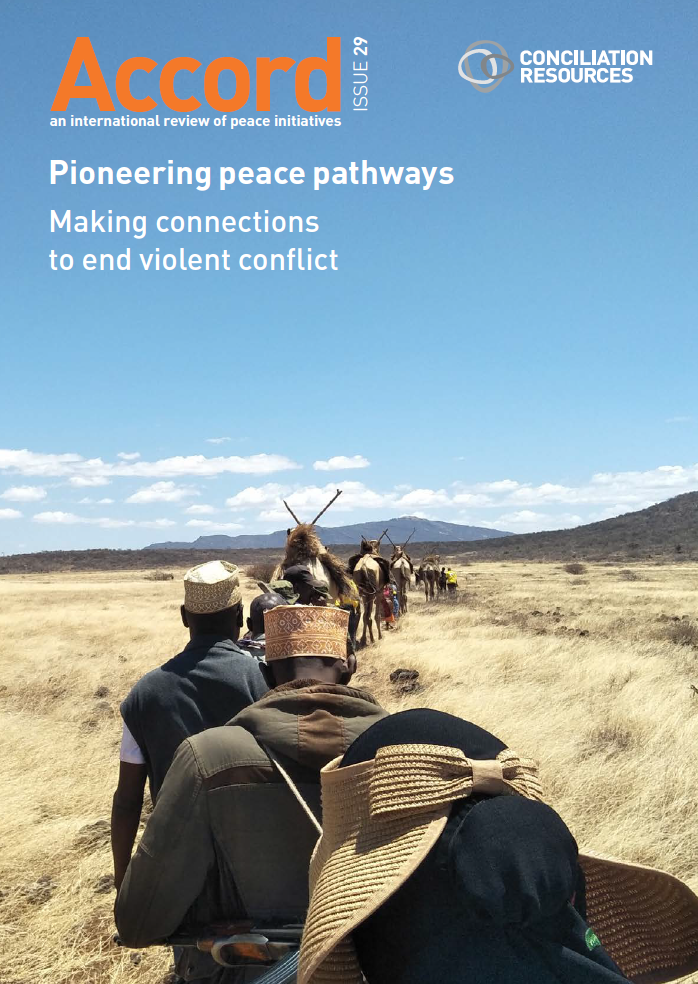 Accord 29: Pioneering Peace Pathways is now available on the Conciliation Resources website

The Accord 29 places a significant emphasis on inclusion in peacemaking, and we approach this issue in several different ways. First, we take a closer look at path dependency. The earlier in peace process that inclusion options and practice are set down, the more likelihood there is of some of those pathways sticking for the course of what is often many years of negotiations. In practice, we see that it’s very hard to retrofit inclusion into exclusive processes, and these are very exclusive processes because they are usually negotiations that are dominated by male armed actors, making women’s exclusion particularly pronounced.

In the Accord, inclusion as a theme is woven across many different articles, including a focus for example on a very interesting experiment that has been occurring in Northern Syria around the role of women in public life and connection to peacemaking, right over to the ways that young people are promoting and pushing for different ways of thinking about peace and security.

We also placed a strong emphasis on having many women writers as well as peer reviewers, while also bringing forward the perspectives of so-called insider mediators. Those people are generally working in a conflict-affected setting, have a particular credibility, and are seen as an honest broker. These individuals are highlighted across the Accord, and we also include articles from individuals in Afghanistan and Myanmar who exemplify this type of insider mediation.

Some of the other themes across the Accord include the need to accompany both armed groups as well as government actors. We often focus on trying to support armed groups to try to come to the table because they are probably most marginalized in terms of the way in which they approach negotiations. They are often working in exile or in diasporas, they might not have a clear headquarters, and there are a range of other reasons why they’re not well prepared for negotiations. However, the Accord also argues that so too are many within government, not aware of how to prepare for peace process or how to negotiate in good faith. We would like all of those entities to think about the different ways in which you can negotiate with compromise in mind.

I think the final big theme in the Accord is thinking about new technologies, digital analysis, and social media, and how these have both incredibly positive impacts for peacemaking but also have some very significant downsides. The mediation sector as a whole really needs to grapple with the pros and the cons, the perils and the promise of these digital advances.

What role do you see for organizations like the Sasakawa Peace Foundation in peace mediation support and early intervention efforts?

The landscape of funding for peace processes has changed significantly in recent decades. It’s become much more complicated, and part of that relates to anti-terror proscription regimes in many states that inhibit entities from engaging armed groups that are on a terror list of a particular government or a regional organization. The nature of state donors is also changing. There are pressures and anxieties in terms of risk management and the ways in which funding decisions need to be made in an increasingly populist, nationalist environment.

As a result, the type of funding that is given to peacemaking entities is increasingly projectized. We're starting to see more compartmentalization of funding to particularly the INGOs and the private diplomacy actors in this space. That has consequences because this type of work is very unpredictable, and it requires long-term incremental accompaniment of conflict parties. It's very hard to predict the scope of activities that one might undertake, so long-term flexible funding is the best option. That means that if an opportunity presents itself, then organizations can seize it, or if they see an opportunity they can make it. This line of work requires a lot of innovation and creativity, working around a lot of problems, procedure, and etiquette that might be standing in the way of getting people to the table.

An entity like the Sasakawa Peace Foundation is really well placed to provide support in this particular part of peace processes because as a foundation, they have a degree of flexibility that some state donors do not have and they are able to provide much longer-term funding. The foundation can also provide forms of accompaniment because the Sasakawa Peace Foundation is what is called a donor-doer, or an entity that does more than providing funding. They also involve themselves in providing conflict resolution practice, be it analysis or facilitating dialogues in different ways.

Because the Sasakawa Peace Foundation has practitioners that work in the field and are interested in being agents of change in peace processes, that also brings another layer of understanding of this very complex terrain that is simply not amenable to a standard 12-month or 18-month project cycle.

More broadly, what are your expectations regarding Japan’s participation in these peacebuilding initiatives?

Japan is a country that is regarded as very netrual and one that doesn’t come into complex conflict settings with particular agendas. Other states may have interests and agendas – all states do. These can be positive or negative and they are quite difficult to manage. I think Japan is generally regarded as a state that is very transparent about its interests and comes with a certain willingness to stand back and let good practice occur.

I think this is also really reflected in the way that the Sasakawa Peace Foundation works as well. It works to the side and not necessarily seeking to be in the front. That is really important to put conflict parties and conflict affected communities in the driver’s seat in peace processes.