Interview with Ambassador Jean-Christophe Peaucelle, Advisor for Religious Affairs in the French Ministry of Foreign Affairs 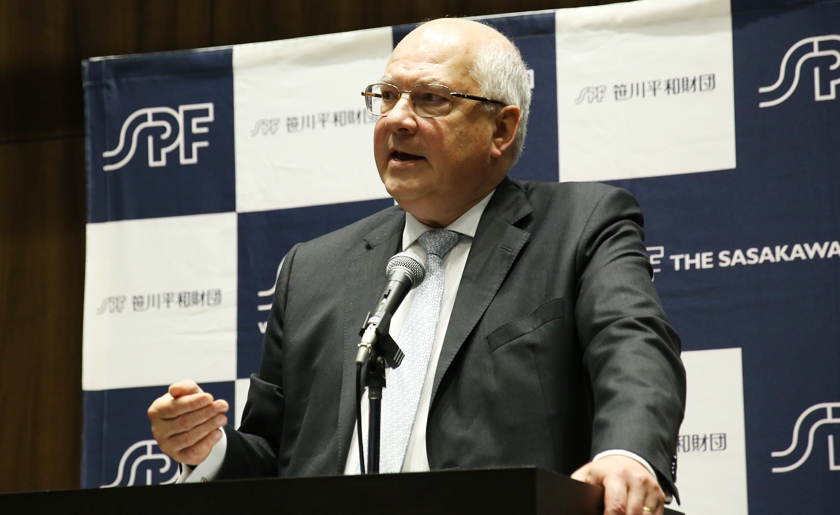 The Middle East and Islam Program Department at the Sasakawa Peace Foundation (SPF) recently invited France’s Advisor for Religious Affairs, Ambassador Jean-Christophe Peaucelle, to the foundation to give a lecture as part of the “Promoting the Understanding of Islam in Japan” project. Ambassador Peaucelle has more than three decades of experience in the French Ministry of Foreign Affairs, including past positions as Ambassador to Qatar, Consul General in Istanbul, and posts in Saudi Arabia, Jerusalem, and Iran. For the past five years, he has served as the Advisor for Religious Affairs in the Ministry of Foreign Affairs, a unique position in the French government focusing on topics pertaining to religion and diplomacy. To learn more about France’s experience navigating the intersection of religion and government, SPF spoke with Ambassador Peaucelle about his current work, the French concept of laïcité, and the importance of enhancing cultural understanding in an increasingly interconnected world. Comments have been edited for length and clarity.


–––––To set the stage for our discussion, what are the key points we need to understand about France’s history and the relationship between religion and the government?

To understand laïcité, let’s go back to history. France is an old catholic country. The church was very powerful and it was linked to the monarchy. At the same time, France is the country of the Enlightenment philosophy – Voltaire, Jean-Jacques Rousseau – and it happened that because of a misunderstanding in the 19th century, those two components of French culture were in strong opposition. The French Revolution was made against the king, and the king was linked to the church, so the revolution was also against the church. If the church was against revolution and the revolution was for democracy, then it followed that the church was against democracy.

In 1905, the parliament passed the famous Law on the Separation of Church and State. In a way, this law is like a peace treaty resolving France’s ideological civil war and bringing peace between the two camps. This law has three main principles. The first concept is freedom, or liberté, which is not only recognized by the government but is also guaranteed by the government. This means that you are free to believe or not to believe, and those who do believe are free to practice their religion.

The second concept is égalité, or equality, because all citizens are equal in front of the law. There is no distinction between believers and nonbelievers or between Christians, Jews, Protestants, Orthodox, Catholics, Buddhists, Muslims, and nonbelievers. To ensure this equality, we have to maintain the strict religious neutrality of the state, and in order to be neutral, the state has to be separated from religion. This is the philosophical root of the principle of separation.

The third part is fraternité, fraternity or brotherhood, which means that if all citizens are free and equal regardless of their religious beliefs or non-beliefs, then they can work together to live in the common political society, which is the nation. This is the principle of laïcité. Laïcité is not against religion and it’s not for religion. It’s for freedom.

––––– Could you describe your responsibilities as the Advisor for Religious Affairs? 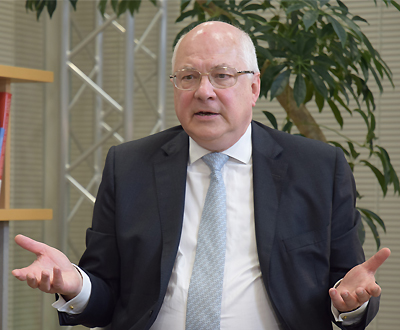 While the world has changed since 1920, today the job is made of three main components. The first component is advising the Ministry of Foreign Affairs, including the Foreign Minister, about the complex religious landscape around the world. In these discussions, it is important to separate what is religious from what is political. In many cases, we think that a conflict is religious, but actually that is very rare. Instead, conflicts are often political, economic, or ethnic. However, when you put religion on top of those conflicts, they become much more difficult to solve. To get out of a conflict you need a compromise, and god is not a matter for compromise.

However, we know that religion plays a role in international affairs, so it would be foolish to ignore this as a factor in conflict. For example, if you look at the Palestinian issue, it’s not a religious matter between Muslims and Jews, but it’s a political matter between Israelis and Palestinians. That said, there is still a strong religious dimension to the conflict, and we must consider how to deal with this religious dimension to create an opportunity for peace.

The second part of the job is speaking with people including religious leaders or people from religious communities as part of France’s global diplomacy. Sometimes this involves very practical matters like arranging visas, but often we also discuss very substantial issues like human rights, freedom of religion, peace, and security.

The environment is also an important topic of discussion. In 2015, France hosted the COP21 for climate change. Pope Francis, whose moral authority goes far beyond the Catholic community, played a very important role to push the idea of uniting to fight climate change on the agenda with the publication of his encyclical "Laudato Si” a few months earlier.

Another issue is radicalization. We need to discuss how to fight this phenomenon in which people get radicalized and become terrorists on behalf of religion. Namely I'm thinking about Islamist terrorism, but there is no monopoly in that. My Muslim friends say that it is not Islam, and I agree. I lived in Muslim countries and I have so many Muslim friends, so I understand the distinction. That said, we need to think about why someone would kill while shouting “Allahu Akbar.” That person is making the connection to religion, not me.

Ambassador Peaucelle: It’s a very complex issue, but I think it’s at the core of any public action today. There are between 5 million and 6 million Muslims living in France, which means around 8-9% of the population. While it is difficult to make precise estimates, we can assume that there are about 50,000 radicalized people among them. 50,000 radicalized people can make a lot of trouble in society and we have to deal with this issue. However, that number is still less than 1% of the Muslim population, so we have to remember the scope of the problem.

This is a question of balance, and it is the responsibility of a government to maintain wisdom and objectivity. It is quite natural for the general public to react emotionally in the event of a terrorist attack. I shall never forget my emotional response to the terrorist attack in Paris in 2015. The government has to remind the people that we shall fight terrorism very strongly, but at the same time, we shall refuse any confusion between those terrorists and the people from our community.

We as a country and as a government have to be honest, determined, and humble. Let’s be honest by looking at the situation as it is, including in our own country; let’s be determined, because it's a major challenge and we have to fight it very strongly; and let’s be humble and accept that we did not do everything perfectly and that we need to cooperate.

––––– Turning to Japan, in recent years the country has begun to welcome more non-Japanese residents as part of its policy to contend with the shrinking and aging population. Based on your experience, are there any lessons that you might offer to Japan as it seeks to build a more diverse and inclusive society? 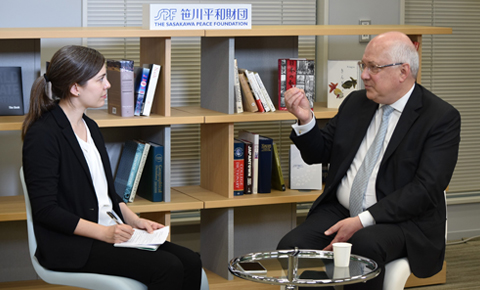 Ambassador Peaucelle: I think that what you mention is not completely disconnected from the European experience, because many countries in Europe have a demographic problem, which means that objectively speaking, most scholars and politicians agree that Europe needs immigration. The difference is that Europe has been a melting pot of populations for centuries, while I think the population of Japan has been much more homogenous.

My conviction is that every country has to find its own way, so I would be very careful in giving advice. Sometimes I'm asked “do you think laïcité should be the model for the world?” and my answer would be no. It was difficult for us in France to find this balance, and it's the fruit of our history. My role is not to export the French model, but instead to share with all of my friends our experience in coming to this concept of laïcité. I think Japan has to find its own way to deal with these challenges.

––––– SPF’s Middle East and Islam Program Department has started a new initiative to expand the public’s understanding of Islam in Japan. In your opinion, what is the value of these kind of activities and what role do you see for organizations like SPF in today’s interconnected world?

Ambassador Peaucelle: This isn’t original but it’s a fact – we're living in a globalized world. In this context, the role of governments, states, and international organizations is and remains a major one, but states and governments also must understand that they’re not the only actors in international life anymore. Ideologies, trade unions, NGOs, international companies, and religious organizations, among others, are also actors.

There is a lot of work to do in the fields of education, women’s empowerment, human rights, and economic development, and all of this begins by cultural ownership and understanding. I think oftentimes governments, NGOs, or other groups have developed projects without really knowing the culture in which they were going to work. As Advisor for Religious Affairs, I always encourage our diplomats to be aware of the religious dimension and to strive to understand the mindset of the people. My message is to get interested, to try to understand what the people have in mind, and to be willing to learn. That is why I'm very happy to have this opportunity to come to the Sasakawa Peace Foundation. As I always say, we are cleverer together than we are alone.

Mr. Gabriele Visentin, who became the EU Special Envoy for the Indo-Pacific in September 2021, spoke with SPF Senior Research Fellow Ippeita Nishida about the role of the special envoy, the EU’s "multi-faceted" approach toward China, the surprise AUKUS announcement on the eve of the EU Indo-Pacific strategy launch, and more.

Ambassador Yamamoto returned to SPF for an interview to elaborate on the outlook for UN operations in Afghanistan, his expectations for international cooperation with the Taliban, and the role to be played by Japan.

Interview with Dr. Alison Weston, Head of the Division for Partnerships and Task Force NATO in the European External Action Service (EEAS)