The oceans are part of our lives, so let's work together to protect them 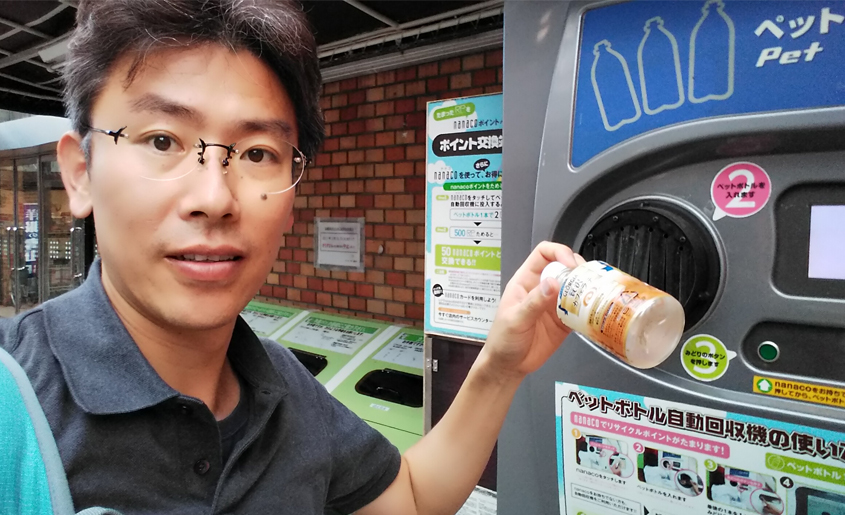 People around the world are increasingly paying attention to the problem of plastic waste in the ocean as a result of the production, use, and disposal of plastics. Of particular concern is the fact that these materials almost never break down naturally in the sea, which leads to a variety of consequences for marine ecosystems. What measures must we take to reduce marine plastic waste? We put this question to Dr. Tomo Shioiri, a researcher looking into the issue of marine plastic waste at the Ocean Policy Research Institute (OPRI).
Concern regarding marine plastic waste is growing in Japan as well as around the world, and Japan has started to reduce the use of disposable plastics and promote recycling. What do you think about these current trends?

Dr. Shioiri: Marine waste has actually been an international problem for more than 50 years, but so far the concerns have not evolved into an initiative that has grabbed the attention of the general public. However, interest in this area is increasing rapidly both in Japan and the rest of the world, which I believe can serve as a catalyst to face up to the issue of marine plastic waste and start working to resolve it.

In modern society, it is almost impossible to live without any plastic. That is why we need to create a social system that educates people about how plastic often ends up in the world’s oceans so that individuals can become more aware and stop the problem from worsening. Plastic flows from cities into rivers and eventually into the sea, and I believe it is critical to stop this flow at the earliest juncture possible.

What is the situation right now regarding marine plastic waste?

Dr. Shioiri: China is the largest overall emitter, but the majority of plastic waste that spills into the ocean comes from Southeast Asian countries such as Indonesia. That said, once plastic has been dumped into the sea, it crosses national borders with ease on the ocean currents. Around 4.8 million to 12.7 million tons of plastic flows into the oceans worldwide every year, of which approximately 20,000 to 60,000 tons comes from Japan. The oceans are all connected, so the waste that we release in one area may end up polluting a beach in some far-off country. 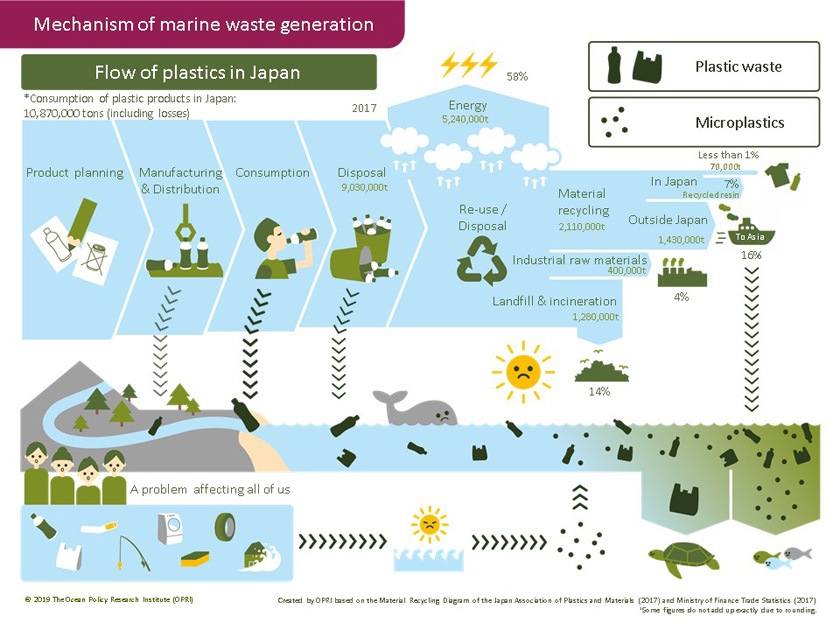 What happens to the plastic that flows into the sea?

Dr. Shioiri: Plastic does not degrade naturally, so once it reaches the ocean it is broken up into microplastic as a result of being buffeted by the waves or degraded by ultraviolet light. Once it becomes microplastic, it becomes impossible to collect. Even if, hypothetically, you filtered all of the world’s seawater to remove the microplastic, you would end up also filtering out all the microorganisms living in the sea that support marine ecosystems.

There are projects underway to clean up the plastic waste already in the ocean, but they are not sufficient to tackle the problem, right?

Dr. Shioiri: That's correct. We need to prevent waste from flowing into the sea in the first place. To do that, we must meticulously clean up and collect plastic from the places around us, such as downtown areas that are littered with plastic waste, rainwater gutters along roads, and rivers. Eighty percent of marine waste originates on land. Where there are people, you will find waste. 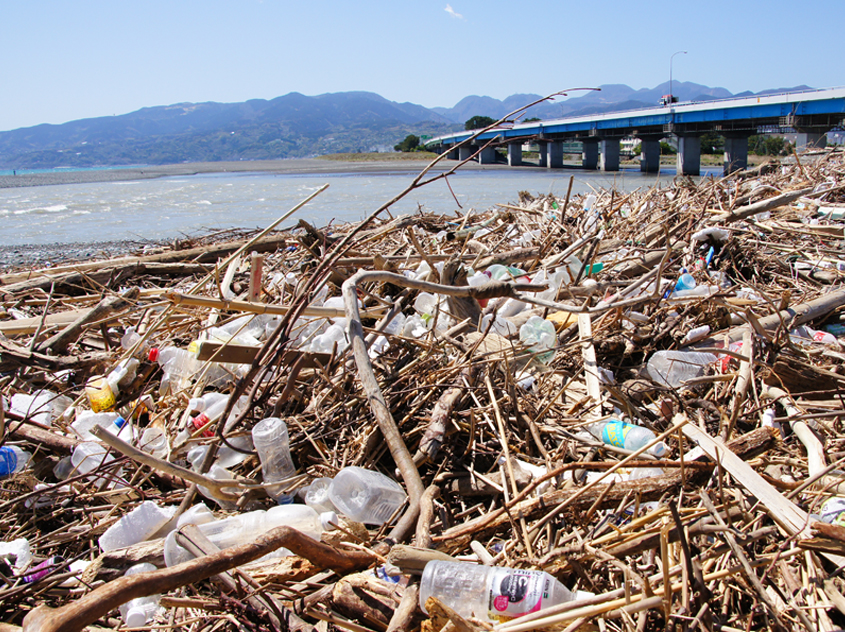 Plastic waste is often found mixed with wood waste in estuaries. This makes it even harder to collect and sort. (Image provided by Kanagawa Coastal Environmental Foundation)

We are not really aware of it in everyday life, but when you think about it, the rainwater gutters at the side of the road are ultimately connected to the sea.

Dr. Shioiri: When thinking about the problems in our seas, we need to look at the connections between mountains, rivers, and the seas, and take action that incorporates all of these factors. In the past, when I was investigating waste in rivers and seas, local residents told me that the best way to pick up waste was not to throw it away in the first place! That notion has always stuck with me, and I really think they were right. Among the various kinds of marine plastic waste, it is relatively easy to reduce the materials generated during the manufacturing and distribution processes because the problem can be tackled by the industry concerned, but reducing waste in the consumption and disposal stages involves an unknown number of individuals, which makes the situation difficult to resolve. To improve, we must understand the mechanisms of distribution and movement of waste on land, work to collect waste at the source, and prevent it from flowing out into the natural world. It is also important for companies to consider the consequences as they plan, manufacture, and sell plastic products, and minimize their use.

If people don't work together, it will be difficult to solve the problem, won't it?

Dr. Shioiri: It is important for industry, local governments, and citizens to work together to take concrete action and change the awareness of society over time. Even when consumers buy eco-friendly products, if they don't separate them correctly when they dispose of them and if nobody is recycling the products down the line, even eco-friendly products will simply become more waste.

Last year, The Nippon Foundation worked with Seven-Eleven Japan Co., Ltd. and other organizations to launch the "Change for the Blue" movement to tackle marine waste. I hope that people in various positions, sectors, and industries will begin to think about resource circulation in terms of the larger framework and create a system for reducing plastic that will then in turn have an impact on society.

In addition, OPRI in cooperation with Fujisawa City in Kanagawa Prefecture, the Kanagawa Coastal Environmental Foundation, Seven-Eleven Japan Co., Ltd. and other organizations has set out to conduct policy research that will clarify the mechanisms by which plastic flows out from the land to the sea, and to create effective measures to deal with the problem of marine plastic waste.

Southeast Asia, which is densely populated and prone to typhoons and tsunamis, has natural conditions similar to those of Japan, where waste flows into the sea every year. In the future, I hope that before more consumer societies based on disposable plastic are established in the Southeast Asian region, where we are seeing remarkable economic development and population growth, we can consider the problems surrounding plastic together and take action informed by Japan’s experiences and based on the particular characteristics of the region.

About Dr. Tomo Shioiri:
After graduating from the National Fisheries University (Ship Engine Systems Course), Dr. Shioiri completed a master's course at Saga University Graduate School of Agriculture (Ariake Sea Tidal Flats). As an engineer at the Kanagawa Prefectural Government beginning in 2000, he was in charge of sandy beach maintenance, coastal area management, legal affairs concerning national property, and other matters. In 2014, he completed his doctoral course at Nihon University Graduate School of Science and Engineering (Department of Marine Architecture and Engineering). In 2018, he served as a government-dispatched expert at the G7 Environment, Ocean and Energy Ministers' Meeting in Halifax, Canada. Since 2011, he has been a researcher at the Ocean Policy Research Foundation (now Ocean Policy Research Institute at the Sasakawa Peace Foundation).

Interview with Dr. Ufuk Ulutaş, Chairman of Center for Strategic Research, and Dr. Mesut Özcan, Director of Diplomacy Academy, Ministry of Foreign Affairs of the Republic of Türkiye

Dr. Ulutaş and Dr. Özcan sat down with SPF to discuss the unique position of Türkiye within the Ukraine conflict, current Japan-Türkiye relations, and possible areas to deepen this partnership, including potential cooperation on defense issues.

In part 2 of the "Recording narratives from the Japan War (WWII)" series, Ms. Sesino looks back at her journey to filmmaking, and considers the role of the arts and film in bridging the knowledge gap between the traditions of the past and future generations.

In part 1 of the "Recording narratives from the Japan War (WWII)" series, Ms. Anjulika recounts her dream of recording stories from WWII, with an emphasis on seeking out the voices of women in order to shine a light on perspectives that until now had remained in the background.