Interview with Brigadier Ewen Murchison, the Head of Futures and Strategic Analysis for the Development, Concepts and Doctrine Centre 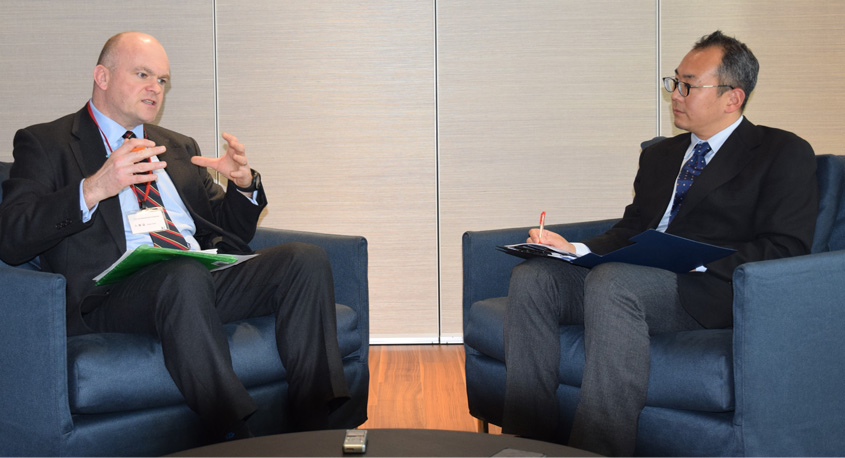 Since 2001, the Futures Team at the Development, Concepts and Doctrine Centre (DCDC), the think tank arm of the UK Ministry of Defence, has sought to inspire creative policymaking by producing strategic outlooks that illustrate the potential challenges that may emerge 30 years down the road. These scenarios, published in the Global Strategic Trends (GST) report series, are created to give policymakers the conceptual tools necessary to promote flexibility in the face of uncertainty and to encourage early intervention to contend with emerging issues. In order to highlight this theoretical approach, the International Peace and Security Department of the Sasakawa Peace Foundation (SPF) in coordination with the UK Ministry of Defence organized an expert workshop to introduce the findings from GST 6, the newest edition of the report, and consider possible applications in Japan. Before the event, SPF Senior Research Fellow Ippeita Nishida spoke with the Head of Futures and Strategic Analysis for DCDC, Brigadier Ewen Murchison, about the importance of creating strategic outlooks and the challenges likely to face the Indo-Pacific region. Excerpts from the conversation are below, edited for length and clarity.

Mr. Nishida: Can you tell us about the mission of the Development, Concepts and Doctrine Centre (DCDC) and explain why you have come to Japan?

Brigadier Murchison: Thank you very much for inviting us here today to share some of our work. I'm a member of the Development, Concepts and Doctrine Centre, which is a think tank within the UK Ministry of Defence. We are responsible for the conceptual component of policymaking, with the scope of our work straddling from 30 years down to 3 minutes. After the Iraqi inquiry in 2003, there was an emphasis by policymakers on evidence-based decision-making rather than decision-based evidence making. We are the organization that helps improve decision-making at all levels.

Within DCDC, there are three main elements: the Doctrine Team, which looks at joint operational-level decision-making for the command and staff; the Concepts Team, which supports balance investment decision-making; and I head up the Futures Team, which supports policy and the strategy development within the Ministry of Defence. We are quite a small team of only about 60 people, 50% military and 50% civilian. Therefore, in order to cover the breadth of work required, we need to build a network with global partners, academia, and other think tanks. To this end, we have come for an Indo-Pacific regional visit to share our Global Strategic Trends report and to better understand the different perspectives in the region. We are visiting Japan, Singapore, Australia, and New Zealand over about a two to three-week period to better understand the richness of the insights in the region as well as the perspectives of those who are here rather than back in the UK.

Mr. Nishida: We are honored to be the first stop on your trip. You mentioned Global Strategic Trends (GST). Can you tell us about how you use the GST series and where this report is located within the UK government's decision-making structure?

Brigadier Murchison: In November we published Global Strategic Trends 6, which is the 6th edition of the series. The larger program has been running since 2001 and provides strategic context for those who are responsible for long-term policy, capability, and strategic planning.

GST is the starting point for the strategy development process and provides foresight to make us more adaptable and better able to deal with uncertainty and surprises in the future. You can think of the Global Strategic Trends, if you like, as the top of a hopper or funnel. Our work is broad, horizon-scanning, collaborative, and unclassified, so it acts as the starting point. Then you can delve down deeper into issues of interest by working with classified information or bringing in other strategic analysis tools such as net assessment, which can then make the analysis richer and more specific.

In the past, we've received feedback that previous reports have been too linear. By looking specifically at trend analysis and seeking out discernable patterns that change over time, our analysis was flagging continuity rather than discontinuity. We've added a couple of new features this time including the new future worlds analysis and certainty assessments, which we think will provoke the richer conversation that we are trying to achieve.

Mr. Nishida: In the 6th edition, the subtitle says, "The future starts today." What do you mean by this?

Brigadier Murchison: We chose the line "The future starts today" to spur action and to encourage decisions be made today to inform the future. Our report looks out 30 years in the future, but when you include a timeframe of the year 2045 or 2050, many of the people who are hopefully going to use the information instead ignore it because it's too far into the future. This analysis is about trying to encourage those in the policy and decision-making world to take action. In other words, we study the future to disturb the present.

For example, everybody knows that climate change is a major issue, but if you wait 10 or 15 years before you take action, some of the mitigation costs could be as much as 40% or 50% more because the problem will become even more complex and challenging. Instead, if you make decisions to take action now and adapt to the new issues of the day, then you set yourself up for success in the future.

Mr. Nishida: What were the main findings of GST 6 and how is it different from previous editions?

Brigadier Murchison: We found that while many of the trends feel very familiar, the rate of change and the level of uncertainty is genuinely novel, which may impact the ability for countries to govern and to stay united nationally and internationally. The central idea of GST 6 is that the pace of change and level of uncertainty could outpace good governance and unity. Now that these changes are happening so quickly, enabled by technology, we need to take action now.

We broke down our work into six key drivers. The first is increasing environmental stress, which includes aspects of climate change, resource scarcity, and other related issues. Secondly, there are demographic challenges particularly with aging societies, unbalanced population growth, increasing migration, urbanization, and the like. Thirdly is the advanced speed of technological change and the ways we exploit and mitigate what is variously referred to as the fourth industrial revolution. Fourthly is increasing human empowerment. This driver speaks to the way that individuals in communities are interacting with one another and are taking much greater responsibility for their own futures. Arguably, phenomena such as the election of Donald Trump, Brexit, and populism are manifestations of this theme. Fifthly is the centrality of information. This refers to the all-pervasive nature of information that has become central to everything we do. Things like social media and the echo chamber effect are now changing the way we interact with one another. Finally, and most significantly, is power transition and diffusion. Power transition between states has largely been brought about by the shift in the economic center of gravity from west to east, and power diffusion within states is a result of an increasing number of actors and a mismatch between the expectations of the population and the capacity of the government to actually deal with issues.

Mr. Nishida: What are the implications for Indo-Pacific security in 2050?

Brigadier Murchison: I think demographics will definitely be an important factor in certain areas. In East Asia, the population will decrease and society will age, causing welfare challenges associated with that. In South Asia and Southeast Asia, you're probably going to see population increases and a growing youth bulge, which requires countries to ensure opportunities for the youth. There are demographic challenges at both ends of the spectrum occurring in the region.

A secondary issue is the potential for inequality as countries move from labor-based economies to technology-based economies. However, this is happening at different speeds throughout the region. In addition, the increasing urban-rural divide will create a level of inequality related to future expectations of the population. Emboldened by social media, individuals can see what other people have.

Next is climate change. The Indo-Pacific region has many islands, and if you believe the sea level rise statistics as they are at the moment, there's a likelihood that as much as 6% to 10% of certain countries will be susceptible to flooding, which could be quite significant. To be fair, I think the region is much more resilient because of experience. There are cyclones coming through Japan fairly routinely and therefore the country has a high level of resilience towards that.

The fourth and potentially most significant theme would be the complex security challenges associated with the region, particularly the disputed territories in the South China Sea and some of the islands around Japan especially. While other challenges like Islamic terrorism and extremism as well as the risk of nuclear proliferation with North Korea remain a concern, I think the biggest factor continues to be the relationship between the U.S. and China. Some would say that the U.S. is becoming a little more introspective and moving away from the region with protectionism in its "America First" stance, which is causing concern because this may potentially destabilize regional security. On the other side of the accord you have China. They have a number of issues that they need to resolve themselves. They've got their Belt and Road Strategy and perhaps we've seen some weak signals recently with regards to the interaction between China and Russia that maybe China realized they need to move a little slower so they don't alienate actors along the way. There is a very complex security framework in the region, which of course Japan is a part.

Related links:
For more on the Global Strategic Trends series, including an online edition of GST 6:
https://www.gov.uk/government/publications/global-strategic-trends