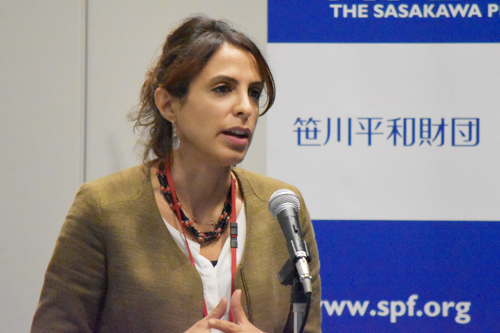 Interview with Dr. Ceren Lord on the influence of sectarianism in Turkey and the Alevi community

On November 13, 2018, the Middle East and Islam Program Department of the Sasakawa Peace Foundation (SPF) welcomed Dr. Ceren Lord, an SPF Postdoctoral Research Fellow at the University of Oxford, to present her findings about the influence of sectarianism in Turkey following the 2011 Arab uprisings. Dr. Lord, who currently conducts research in Middle East Studies at the Oxford School of Global and Area Studies, focused her presentation on the Alevi community, a minority population in Turkey that has a long history of being targeted by the Turkish state particularly after the Justice and Development Party (AKP) came to power in 2002. Following her presentation, Dr. Lord spoke with SPF Now to contextualize her extensive research within the broader literature about the Middle East, to discuss her time as an SPF fellow, and to reflect on the ways that her research at SPF impacted the direction of her future scholastic endeavors. Below are excerpts from that conversation.

― What was the primary objective of your research on the Alevis and what were the main points you were trying to present?

Dr. Lord: The objective was to contribute to the literature on sectarianism in the Middle East, which I think has really neglected the Turkish case. I also think that the Turkish case study says something about sectarianism that has been missed, particularly the longer dynamics of how sectarianism becomes embedded in nation state building, which makes it important to understand why sectarian politics became a viable political strategy in the Turkish case.

The authoritarian turn in the region and Turkey is clearly part of a more global dynamic, but there are idiosyncrasies that you can see from country to country. In Turkey, there are various factors and explanations for the Justice and Development Party's (AKP) authoritarian turn, which include the highly majoritarian nature of the political system it inherited as well as the Islamist ideology of the governing party. As is the case elsewhere in the region, the AKP government responded to the emergence of a broad-based opposition to its rule in recent years partly through trying to divide the opposition through sectarianism, a strategy also seen in places like Bahrain.

I would hope that this research would further the general understanding of the kinds of challenges that different nation states are facing in the region, especially since the 2011 uprisings, as well as highlight the challenges that minorities – and the designation of minorities is very sensitive, so I use that here just to mean a numerical minority – are facing. Their existence and survival is increasingly challenged by groups like ISIS, majoritarian politics and so on. These issues have implications for future conflict dynamics and have significant spillover effects, including the current refugee situation.

― One point that you made was that sectarianism will be a defining force in conflicts going forward in the region. What meaning should people take from that conclusion?

Dr. Lord: I wouldn't say that it's a defining nature of conflicts nor that it is a driving force by any means. Sectarianism is neither an essential feature, a primordial identity nor a 'thing' out there with an autonomous force. It can be considered a subset of identity politics, a way of seeing the world and imposing distinction that has become increasingly important in how actors frame politics and struggles, which has also meant sectarian boundaries have become a lot more politically salient in the recent period. I am interested in not just how and why these identity markers become constructed, adopted and more salient over time, but also the shifting nature of the different types of mobilization strategies employed by different communities. This could mean that shifts in identity result in new fault lines being created. My future research will consider how new forms of identity and religious transformations are happening in the region and what that means for these communities.

― In your speech at SPF, you concentrated specifically on the Alevis. How did you come to focus on this topic?

Dr. Lord: In my previous work, I researched the Turkish ulema, the Sunni-Muslim religious authority that is part of the state, and their role in Islamist mobilization over the course of the history of the Turkish Republic. While I was researching the ulema, I found that the archives were full of descriptions of discriminatory policies against the Alevis. That's how I initially was lured into doing work on the Alevis.

Then I noticed after 2011 that there was a complete mischaracterization of the Alevis, especially in English-language media, and I hope to publish a collaborative paper on this issue shortly. The Western press often presented the Alevis as part of some sort of a Shia network. In fact, Alevis have regarded Turkish state strategies of Sunnification as well as Iranian Shiafication as threats to their faith. This misconception I think resulted from the sudden interest in the Alawites of Syria, which I suppose led journalists to look for the next potential problem in the region. At that time, a host of articles came out in which journalists were suggesting that the Alevis in Turkey were going to be allying with Iran or the Alawites of Syria and so on.

There was not that much scholarly research on the Alevis generally until recently and not much knowledge about the community, even though they make up about 15-20% of the Turkish population. The emergence of the Alevi movement in the 1990s is understood generally to be related to the crushing of the left after the 1980 military coup, the initiatives of the diaspora in Europe, and importantly the Sivas massacre in 1993 when a mob of thousands of Sunni citizens leaving Friday prayers attacked an Alevi cultural festival and murdered 35 people. The Alevi movement has campaigned for equal citizenship rights, and matters such as access to secular education, and do not have a political party or Alevi group demands per se. Alevis have also had to hide their identity for a long time because they were persecuted.