Closing gender gaps in Myanmar through innovative businesses and entrepreneurship 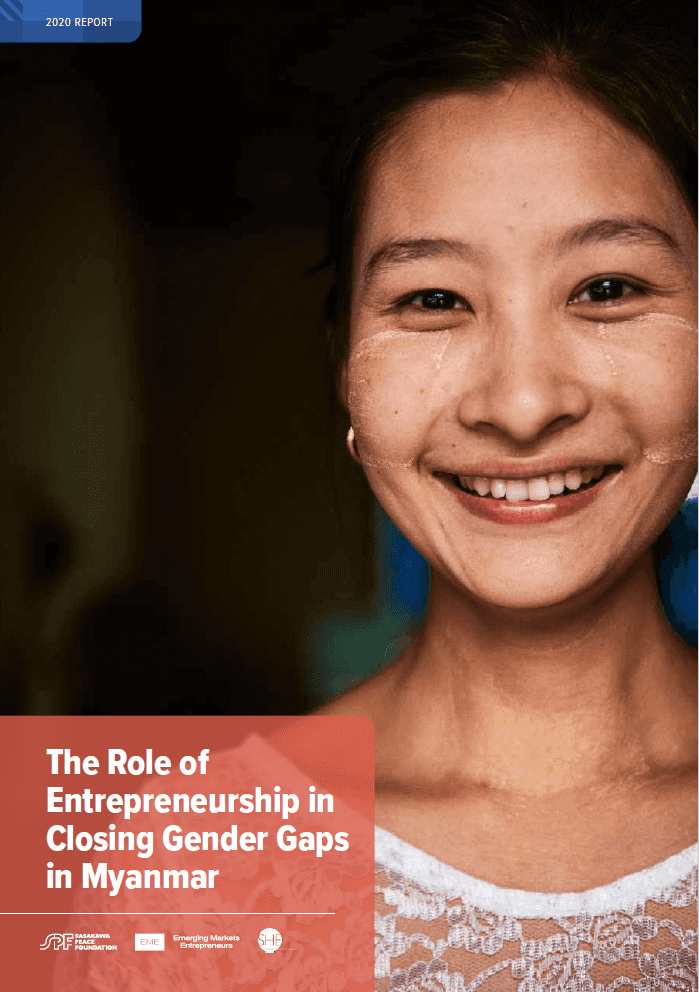 Myanmar, as a country with a burgeoning entrepreneurial ecosystem, has the opportunity to leverage this development not only for economic ends but also to drive social change and work toward closing gender gaps in the country. In recognition of this critical juncture, the Gender Investment and Innovation Department at the Sasakawa Peace Foundation (SPF) launched the Gender Equality Myanmar (GEM) program, a pilot initiative that seeks to explore the potential for entrepreneurship to impact the lives of women and girls in Myanmar.

To introduce this new initiative and present the initial research outcomes, SPF in collaboration with the Aspen Network of Development Entrepreneurs (ANDE), Emerging Market Entrepreneurs Myanmar (EME) and Support Her Enterprise (SHE) held an online launch event on September 15, 2020.

The two-part event began with a presentation of the new report, “The Role of Entrepreneurship in Closing Gender Gaps in Myanmar,” which lays out the landscape regarding gender gaps that currently exist in Myanmar and the potential role for innovative businesses in shrinking those gaps. The session concluded with a presentation event showcasing five innovative entrepreneurs seeking to expand their businesses to amplify their impact on women across the country.

Gender Investment and Innovation Department Senior Advisor Lily Yu kicked off the event by introducing SPF’s commitment to women’s empowerment as one of the central goals of the foundation. The latest initiative in this work, the GEM program, began in February 2020 with a preliminary study to understand the key dimensions of women’s empowerment in Myanmar, which resulted in the new report presented at the event. 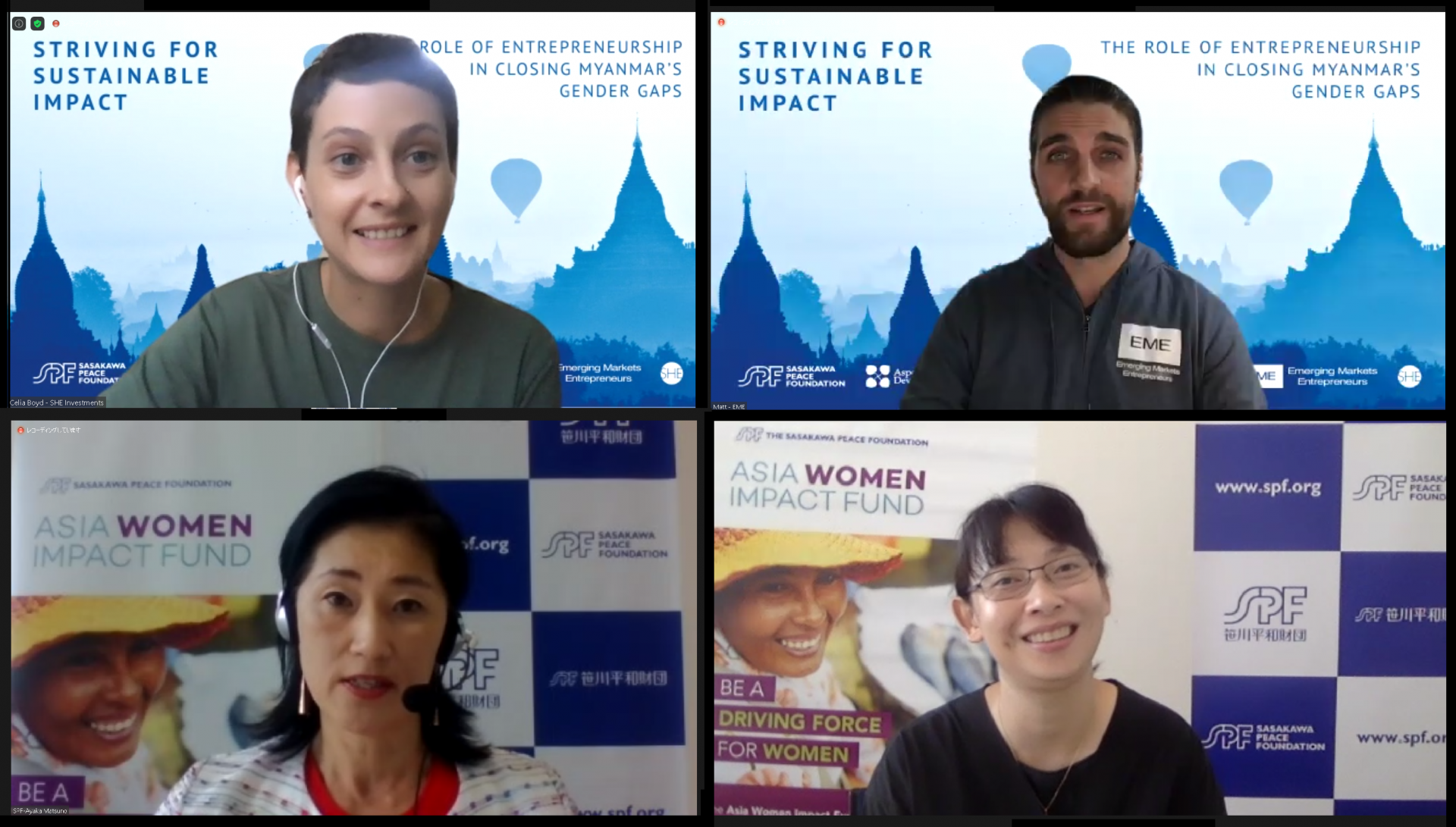 Celia Boyd, Managing Director of SHE Investments, followed up with an in-depth summary of the key findings of the research. These include evidence that education equality between men and women at the primary school level has not resulted in equal job opportunity as adults and that health issues including high maternal mortality and rates of suicide are having a significant impact on women in Myanmar. In addition, she noted that the research pointed to a puzzling relationship between high levels of gender-based violence against women alongside women’s high perception of safety in the community.

Taking these results into account, she argued that enterprises have a key role to play in addressing the gender gaps identified in the research as well as creating safe workplaces for women to encourage progress toward greater empowerment.

Matt Viner, Investment Manager for EME Myanmar, provided an investor and business perspective on the challenge presented by gender gaps in Myanmar. He laid out the results of two surveys conducted in Myanmar focusing on the progress of innovative enterprises seeking to close gender gaps as well as the state of women-owned and women-operated businesses in rural Myanmar. He concluded by unveiling a new interactive digital dashboard, which provides an interactive interface displaying the results from the second survey.

The second half of the event was dedicated to a presentation event, moderated by Gender Investment and Innovation Department Program Director Ayaka Matsuno, featuring five finalists working to leverage their entrepreneurial ventures toward greater social impact in Myanmar.

The finalists include Zigway, a company that provides monthly subscriptions for household essentials; Myanmar Women’s Self-Defense Center, which trains women in martial arts and self-defense as a form of empowerment; ONOW Myanmar, an incubator that trains women to start their own micro businesses; How She Did It, a coaching app promoting the development of soft skills; and Ezay, an app that connects mom and pop shops with wholesale distributors. 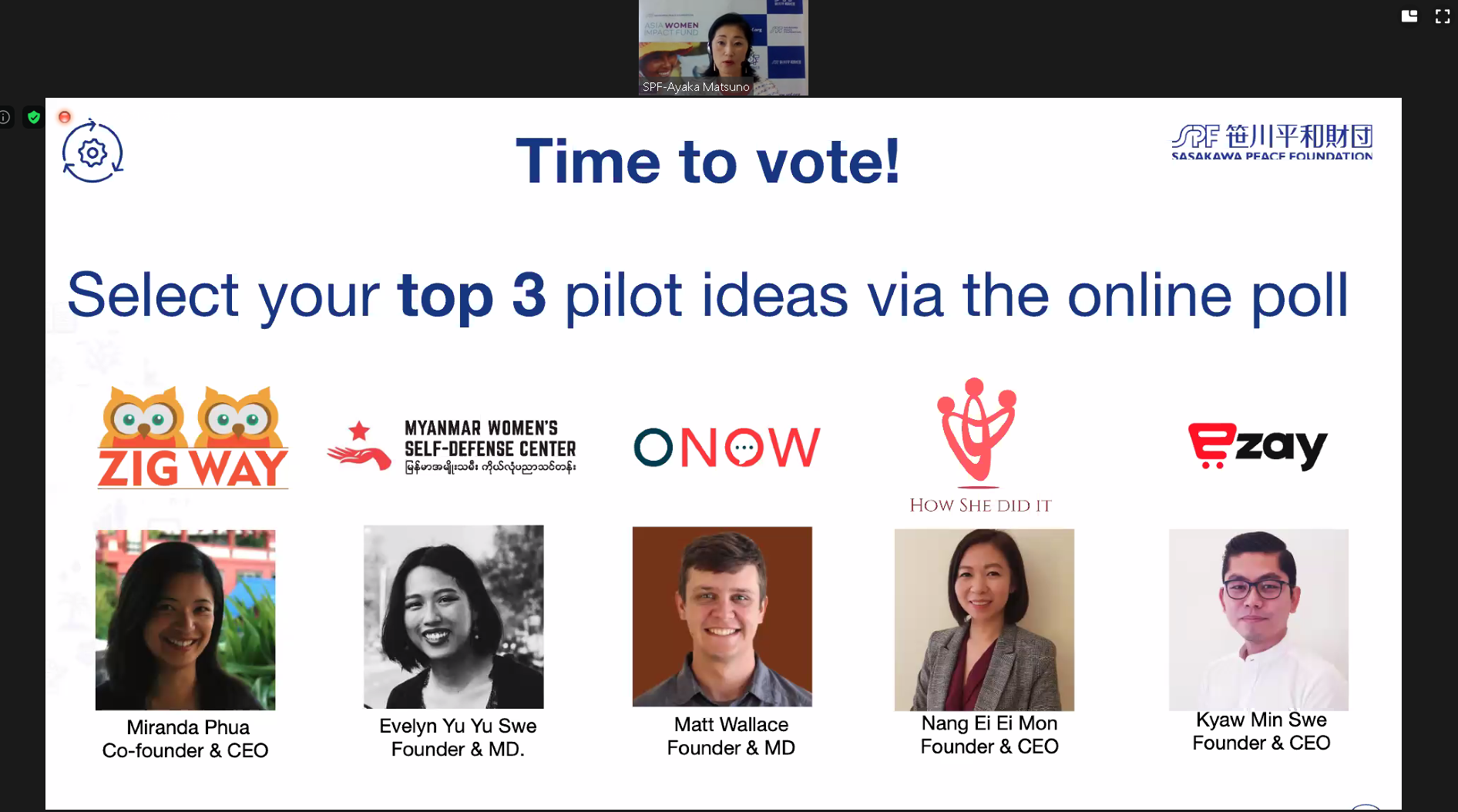 The three enterprises selected to be GEM partners are How She Did It, Opportunities Now, and Myanmar Women Self Defense Center. Thank you to all the enterprises that applied for the GEM initiative.
Gender Investment & Innovation Southeast Asia
Share

Closing gender gaps in Myanmar through innovative businesses and entrepreneurship