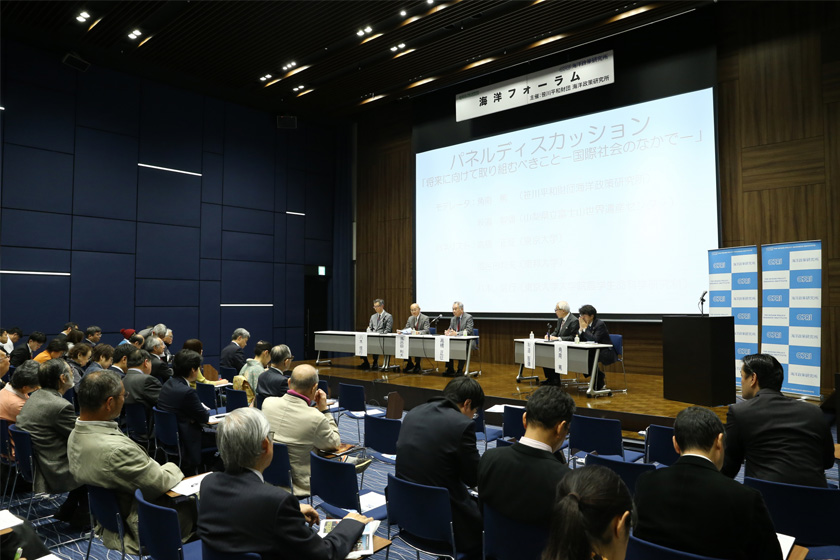 On April 17, 2019, the Sasakawa Peace Foundation’s Ocean Policy Research Institute (OPRI) held an "Ocean Forum" to highlight the new series Human-Ocean Relations. In February 2019, OPRI published the first two books in the series entitled For the Japanese to Continue Eating Fish and For Protecting Marine Life Diversity. The forum invited five editors and contributors from the series to consider the ocean’s future and discuss some of the main themes from the first two books.

OPRI’s bimonthly Ocean Newsletter, which has been published since August 2000, served as the basis for the new book series. Aimed at both experts and the general public, the newsletter communicates a variety of opinions and viewpoints on the ocean from a range of experts and stakeholders. As of April 5, 2019, 448 issues of the newsletter have been published featuring nearly 1,350 articles. The Human-Ocean Relations series is a curated collection of essays from this store of valuable wisdom based on a specific theme. 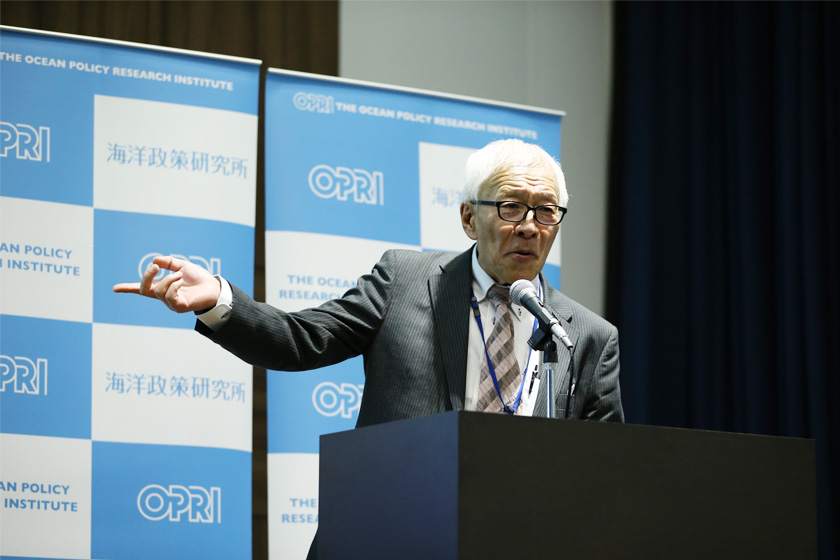 The idea behind Human-Ocean Relations

The forum’s opening speech was given by Atsushi Sunami, President of the Ocean Policy Research Institute and one of the editors of the Human-Ocean Relations series. He then handed the podium over to Tomoya Akimichi, Director-General of the Fujisan World Heritage Center, who is also an editor of the book series and served as the Chief Editor of the Ocean Newsletter for 12 years. His remarks included an introduction of the content of the series and discussed a range of issues related to Japan’s ocean policy.

Dr. Akimichi explained that Human-Ocean Relations was selected as the name for the series “due to the diversity of connections between humans and the ocean, spanning a variety of areas from the environment to culture, education, economics, technology, energy, national security, and politics.” He added that a feature of the series is that it “considers the relationship between the ocean and humanity from multiple viewpoints.”

The theme of the first volume is one familiar to the Japanese: marine food culture. The book presents the future of eating fish while taking into consideration the complex systems at play including nature, economics, culture, fishing rights, regional development, and illegal, unreported, and unregulated (IUU) fishing. The second volume focuses on biodiversity and considers the future measures necessary to preserve biodiversity while also considering the problem of marine debris within the broader ocean ecosystem.

“The world’s oceans are now in danger, and so is Japan’s fish-based diet,” Dr. Akimichi warned. He explained how “harmful substances are attaching to microplastics floating in the ocean, which then build up inside the bodies of marine life instead of being broken down and are ultimately consumed by humans as food. This plastic, something that we created as a tool for ourselves, is coming back to haunt us.”

However, Dr. Akimichi also spoke about how the movement to establish marine protected areas (MPAs)—which regulate resource development, fishing, and tourism to protect marine ecosystems—is also gaining momentum. Japan in particular has been involved in preserving its coastal environment for many years, designating over 1,000 ocean areas as MPAs. Based on this trend, Dr. Akimichi proposed that “since Japan possesses such a long history of eating fish as well as establishing MPAs, the country should not just follow suit with the UN’s Sustainable Development Goal (SDG) 14 to 'conserve and sustainably use the oceans and marine resources for sustainable development,' but instead come up with its own unique ocean policy.” 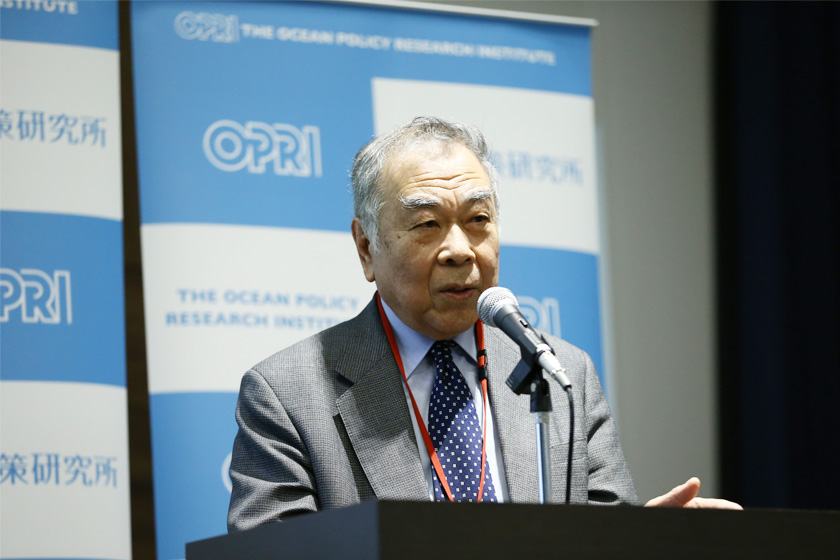 Masayuki Takahashi, Professor Emeritus at the University of Tokyo

The forum continued with a presentation by Masayuki Takahashi, Professor Emeritus at the University of Tokyo, who contributed to the first volume in the Human-Ocean Relations series.

Dr. Takahashi pointed out that “when considering the productivity of wild fish, current catches of just under 70 million tons are too large.” Meanwhile, the amount of fish consumed worldwide has continued to grow since the 1950s. While this demand was previously supported by only wild-caught fish, farmed fish have also become increasingly common. In 2014, the amount of farmed fish exceeded the amount caught in the wild.

In order to support the world’s continued demand for fish, Dr. Takahashi remarked that “the balance between wild-caught and farmed fish is important,” suggesting that “we should consider targets of 10% for wild fish and 90% for farm-raised fish.” Currently these levels are at nearly 50% each. “The challenge facing Japan is the creation of a system that also permits the consumption of naturally caught fish in order to preserve the country’s culture of enjoying a variety of wild fish into the future,” he pointed out. 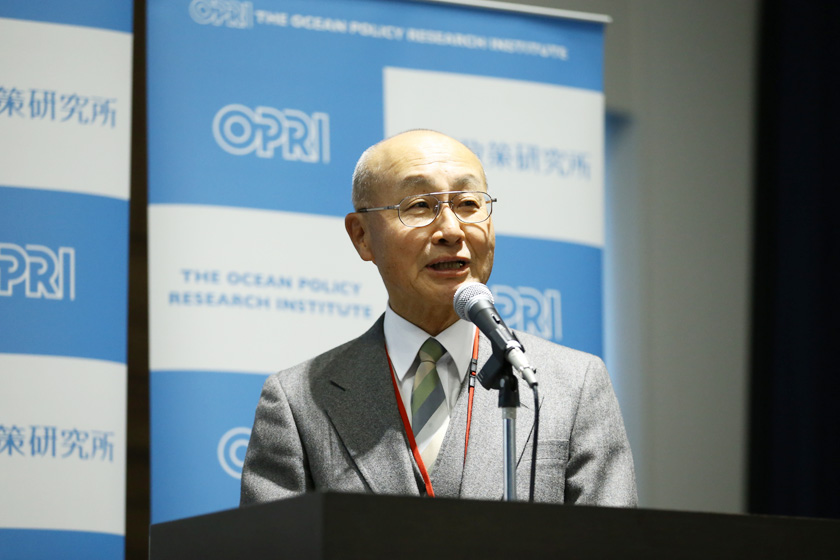 Considering coastal ecosystems in terms of the hard clam

The next speaker was Toshio Furota, Professor Emeritus at Toho University and contributor of the article “Is the Hard Clam (Mercenaria mercenaria) a Savior Species for the Marine Industry or a Harmful Invasive Species?” which was published in the second volume of the Human-Ocean Relations series.

Since 2000, the distribution and density of the hard clam population has expanded at such a rapid pace around Tokyo that it has become the most common large bivalve in Tokyo Bay. This hard clam is a non-native species originating from the North American Atlantic Coast and is able to withstand harsh environments.

“There is a close relationship between Tokyo Bay’s environment and hard clams,” Dr. Furota pointed out. “The loss of tidal flats due to increased land reclamation and red tide have made the bay’s environment unsuitable for littleneck clams and surf shell, resulting in the establishment and growth of the hard clam population there,” he explained. “By adapting itself to live in a low-quality environment that had been left vacant by others, this species was able to secure a habitat for itself in the bay.” In other words, by making the area’s environment suitable for littleneck clams and other native species, the hard clams will subsequently be pushed out of the area.

“In order to recover the original Edomae sense of taste, it is essential that we return the environment back to a stable state where littleneck clams and other native species can live,” Dr. Furota said. One method he proposed to achieve this goal is improving the bay’s environment while at the same time “actively utilizing the hard clam population by harvesting it, which will inevitably control the population.” He pointed out that these and other factors need to be taken into account to improve the conditions in Tokyo Bay. 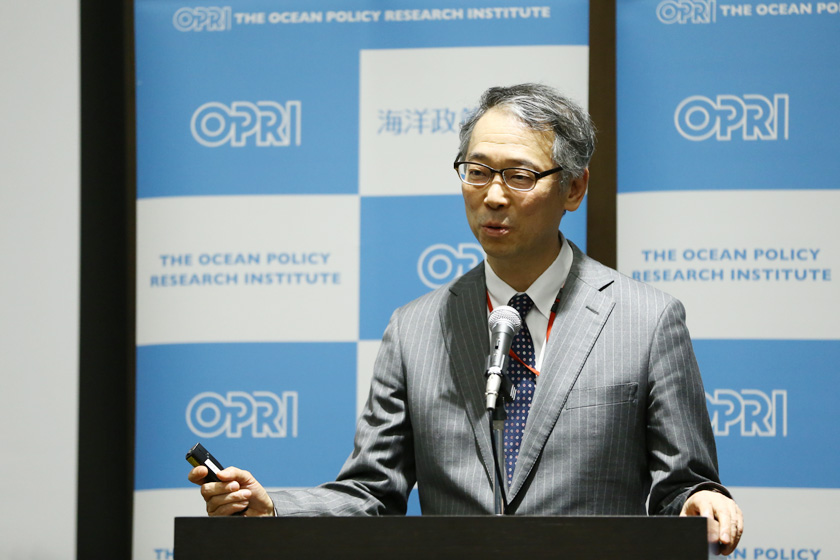 Nobuyuki Yagi, Professor at the Graduate School of Agricultural and Life Sciences, the University of Tokyo

The forum concluded with a presentation by Nobuyuki Yagi, Professor at the Graduate School of Agricultural and Life Sciences at the University of Tokyo, who contributed the article “Characteristics and Issues of Japanese-style Marine Protected Areas” for the second volume of the series.

Dr. Yagi continued Dr. Akimichi’s discussion of protected areas by explaining that Japan’s MPAs are numerous and have a long history. He also noted that Japanese MPAs share several characteristics, including that they are small in scale, located close to the coasts and not offshore, and many have been established by the fishermen themselves.

However, when looking to the world’s oceans, one comes across so-called “paper parks.” “While protections exist on paper, in reality no one goes out to monitor or enforce these areas,” he said. “These are places where regulations are either not acknowledged or are ignored.” These “paper parks” are located everywhere in the world. To avoid such situations, cooperation among stakeholders such as local residents, fishers, and the government is necessary.

In addition, “the act of establishing protected areas in the ocean is one form of interaction between the ocean and humans,” Dr. Yagi explained. “In order to have a discussion among stakeholders on MPAs, we need to give thought to how humans perceive the ocean ecosystem.” He also highlighted a coordinate graph from the book series (p. 168, Vol. 2), which organizes the relationship between “items of interest related to the ocean (how humans want to use the ocean’s resources)” and “awareness of where humans (oneself) stand in the ocean ecosystem.”

Regarding Japanese MPAs, he argued that “the results of one survey show that while many Japanese consider themselves a part of nature, many Westerners think of themselves as standing outside the ecosystem. Also, a large number of Japanese fishermen see themselves as being inside the ecosystem, viewing the ocean as a place to procure food and to live. Accordingly, they are strongly motivated to protect the ocean. I believe that the large number of these kinds of groups in Japan is the reason why we do not see ‘paper parks’ created here.” 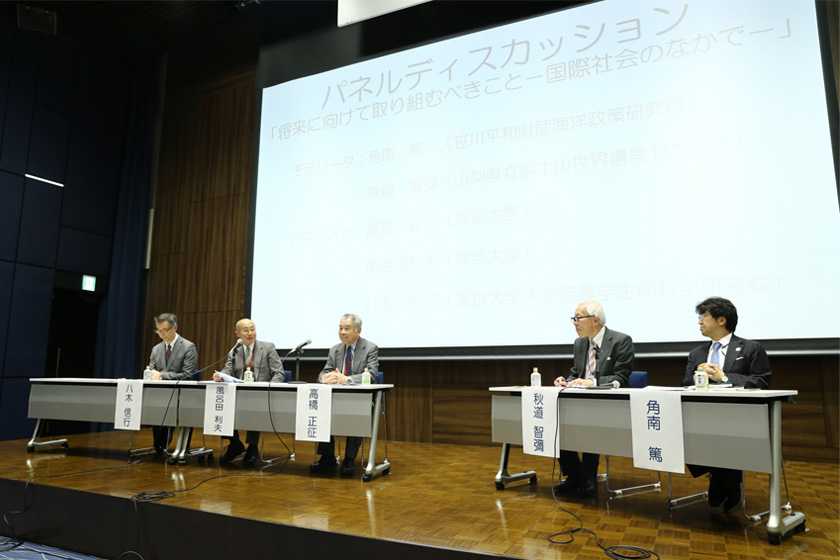 Scene from the panel discussion

Key initiatives for the future

During the panel discussion, moderated by Dr. Sunami and Dr. Akimichi, participants began with a conversation about a comment made by Dr. Akimichi arguing that the three previous presentations, while independent of each other, still share many common themes. A large number of questions were also received from the floor that tackled the essence of the topics presented.

In response to concern raised by the audience about a visible trend of children being unfamiliar with the ocean, Dr. Furota said that “we need policy that offers them opportunities to experience the ocean for themselves. It is vital that we get them to experience it not just visually, but through their other strong senses such as taste and touch.” Dr. Akimichi, referring to the future direction of education, added that “it is important that dietary education focuses on children’s emotional development related to how we Japanese interact with nature and the concept of ‘giving thanks to the living things eaten.’”

In closing, Dr. Akimichi revealed that the theme of the third volume of the Human-Ocean Relations series will be “Who Owns the Oceans?” and will discuss current disputes over the world’s oceans and the many issues surrounding resolution of these conflicts. The forum ended with a passionate call for attendees to “pick up the new volume and use it as a resource to think about ocean issues based on an open-minded and broader perspective.”
Ocean Policy Research Inst. Northeast Asia
Share