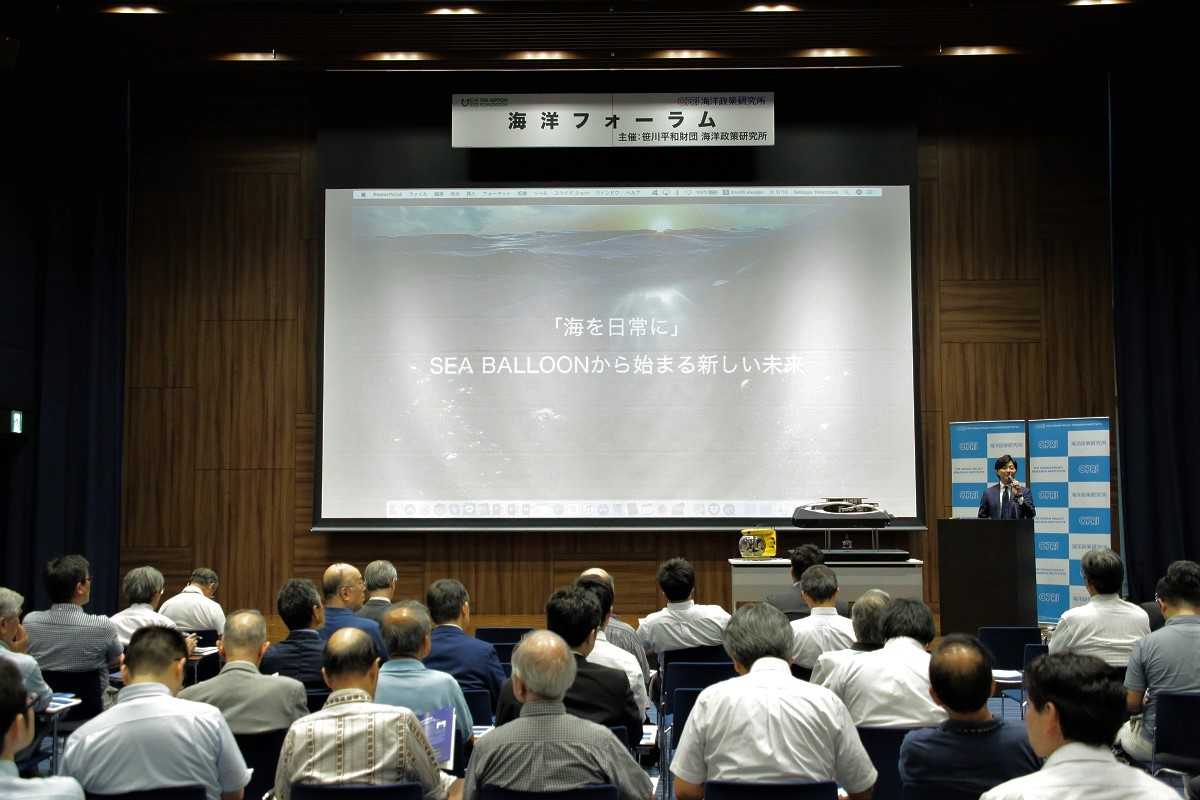 The Ocean Policy Research Institute (OPRI) of the Sasakawa Peace Foundation held an “Ocean Forum” on September 17, 2019, inviting Mr. Tetsuya Yonezawa, Representative Director of Ocean Spiral Inc., to give a lecture on the theme of “The Future of Ocean-related Business from the Perspective of the Sea Balloon.” 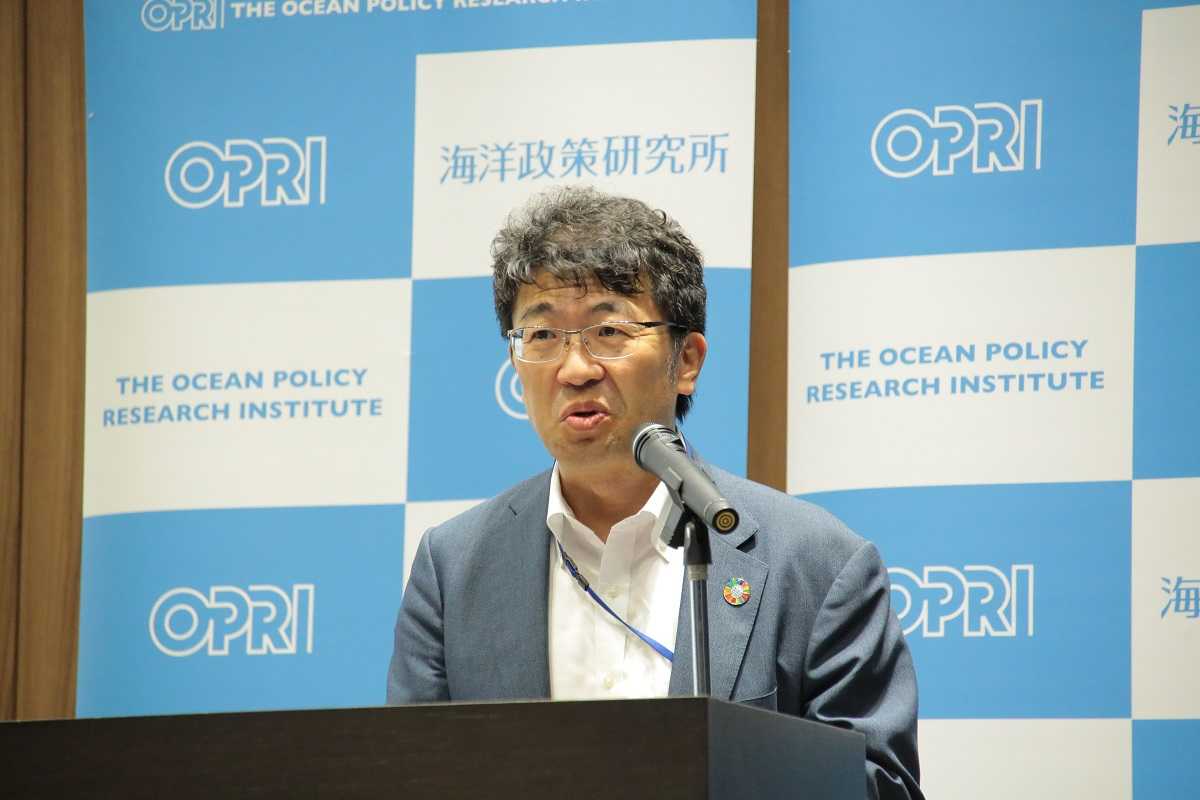 In the opening remarks, OPRI President Atsushi Sunami mentioned that this edition of the Ocean Forum would be quite different to the usual topics covered such as ocean policy and frameworks, as this forum would feature a lecture by the leader of a startup company taking on a new form of ocean-related business. President Sunami was very optimistic in the opportunity, commenting, “The Sea Balloon stands for something that is at the core of OPRI’s work – the importance of feeling the ocean in our daily lives.”

Furthermore, he added that the Sea Balloon could serve as a channel not only to allow people to experience the ocean in their personal lives, but also to help them to learn about the current issues surrounding the global ocean.

The background of developing the "Sea Balloon" 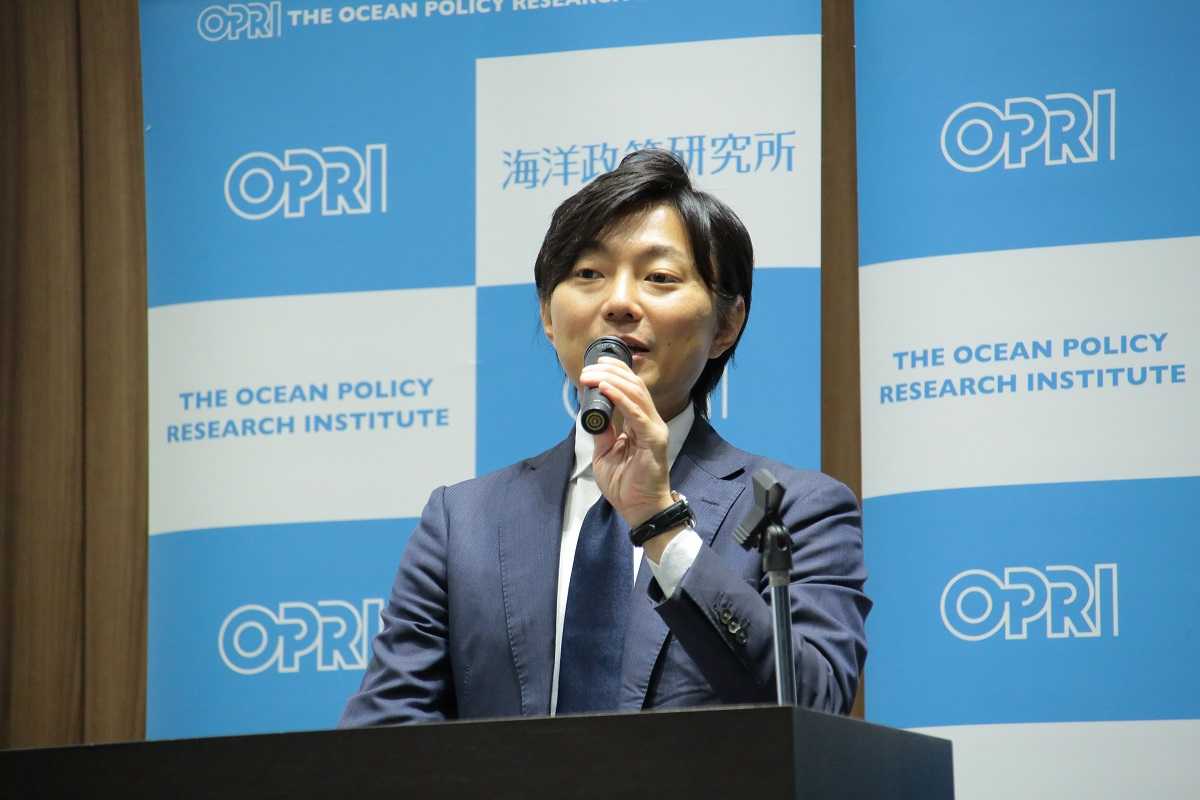 To begin the lecture, Mr. Yonezawa first explained the background behind developing the “Sea Balloon” concept. While there are various ocean-related efforts such as ocean-themed hotels, ocean floor mapping, etc., there has never before been an opportunity to embark on a “trip to the ocean” to take in its natural views at a price affordable to the public. Often referred to as the earth’s last frontier, the ocean remains a faraway place to many. However, Mr. Yonezawa mentioned, the development and understanding of the ocean could bring a large benefit to humans.

With this situation, Mr. Yonezawa, who built his career mainly through working in startup firms, said that he thought of a way that would allow the public to experience the ocean in their everyday lives. Believing that the “world inside the ocean” will largely change in the upcoming years, Mr. Yonezawa founded Ocean Sprial Inc., with the aim of creating the world’s first “Sea Balloon” that would allow participants to experience the ocean as if they were submerged in it at an affordable price. 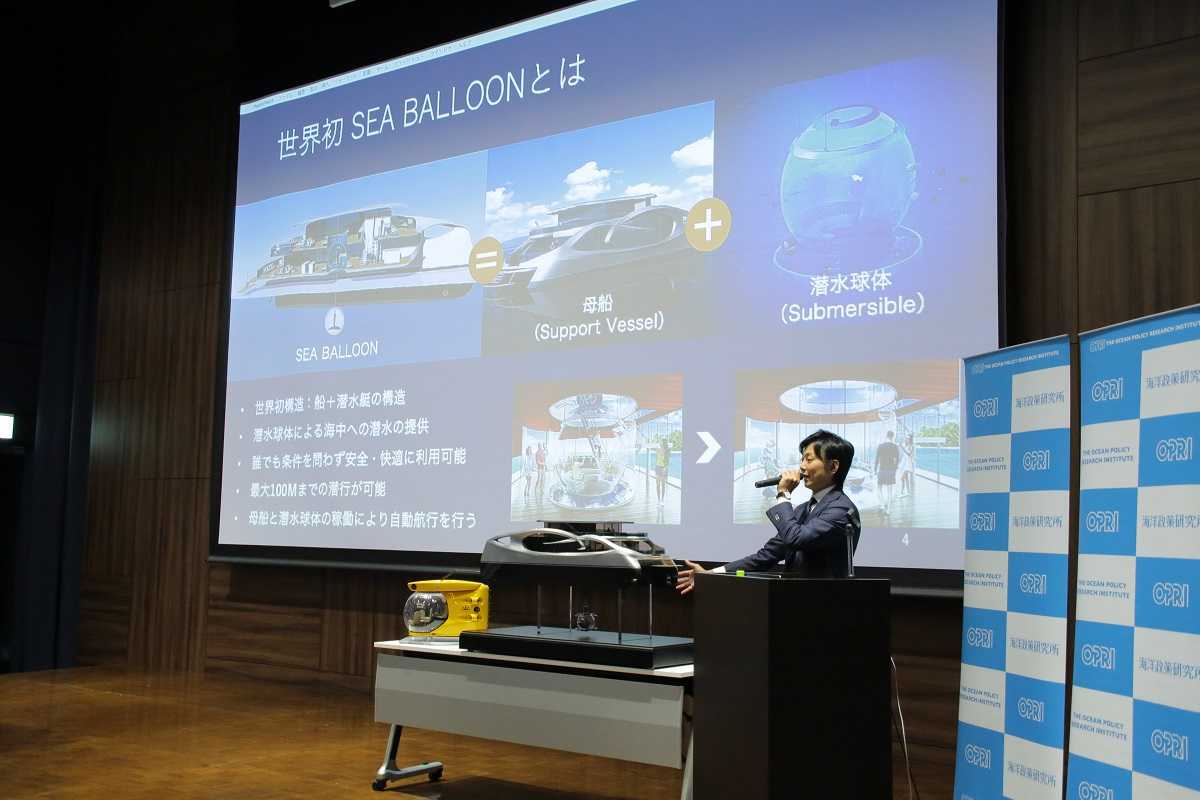 Mr. Yonezawa explains the “Sea Balloon” concept, which utilizes both a support vessel and a submersible.

How exactly does the Sea Balloon work? The concept is made largely of two parts – the supporting vessel (or the mother vessel) and the submersible, which is an acrylic dome (see photo above). The Sea Balloon is mainly to be operated in beach resort areas as they are likely to provide the most scenic views. Working in tandem with the support vessel (mother vessel), the Sea Balloon will first be transported to a fixed diving location. Fitting a maximum of five people, the submersible will then begin its descent. According to Mr. Yonezawa, the submersible can reach a depth of 100 meters in eight to ten minutes, descending slowly and taking a route that has been planned ahead of time. Through this descent, Mr. Yonezawa said, participants would be able to see and “feel” the ocean as if there is no barrier.

A key partner in the creation of the Sea Balloon is Triton Submarines LLC. Based in Florida, the firm is known for contributing the submersible used for the dive that produced the first ever footage of a giant squid swimming in its natural habitat, which aired in broadcast TV programs in Japan and the US in 2013. Utilizing its existing technology with regard to use of the submersible, Triton Submarines is providing full technological support toward the development of the Sea Balloon, as well as guidance regarding the safe operation of the Sea Balloon’s components. 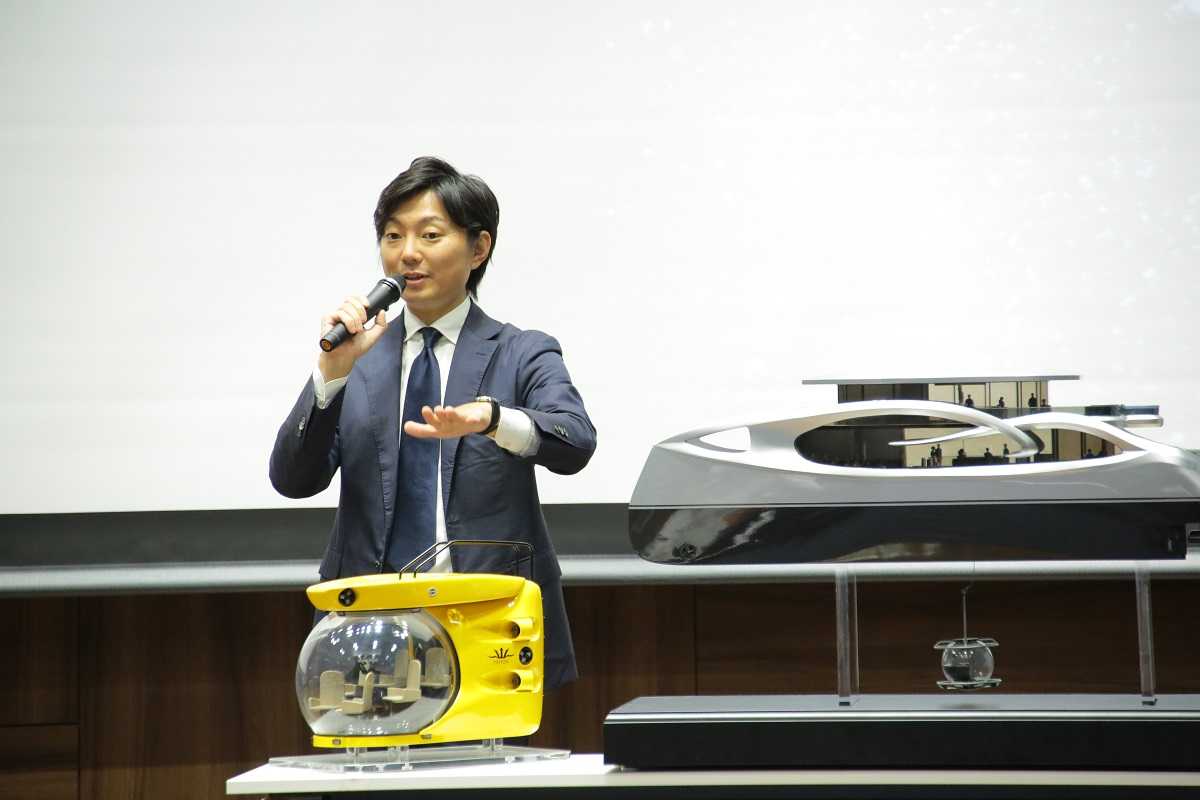 The Sea Balloon presents not only a new way to see the ocean, but to experience it. Mr. Yonezawa emphasized that he hopes the Sea Balloon will serve as a “communication tool.” This idea stems from the fact that in recent years, increasing numbers of young people are turning to social media channels as a way of deciding potential travel activities and destinations. Mr. Yonezawa commented, “With regard to travel, people are placing their values on different things than before. Now, people seem to be placing more emphasis on the experience that one would get from going somewhere, and potentially sharing that experience with someone, rather than the travel destination itself.”

Mr. Yonezawa added that while diving could be described as an individual activity, through the Sea Balloon, people could experience being in the ocean, and have conversations with others while doing so. In doing so, Mr. Yonezawa said that the Sea Balloon could be a game changer in experiencing the ocean.

An eye toward the future

The Sea Balloon is to utilize a business model in which there are four key partners – the owners, the manufacturers, the operators, and the sales and marketers. Along with Triton Submarines, several Japanese firms have joined the project, with the entire group taking on the name of “Team Ocean.” The team includes firms involved in travel, housing, space design consulting, among others. With Ocean Spiral at the center, the Team aims to realize the first “trip to the ocean” in 2021. 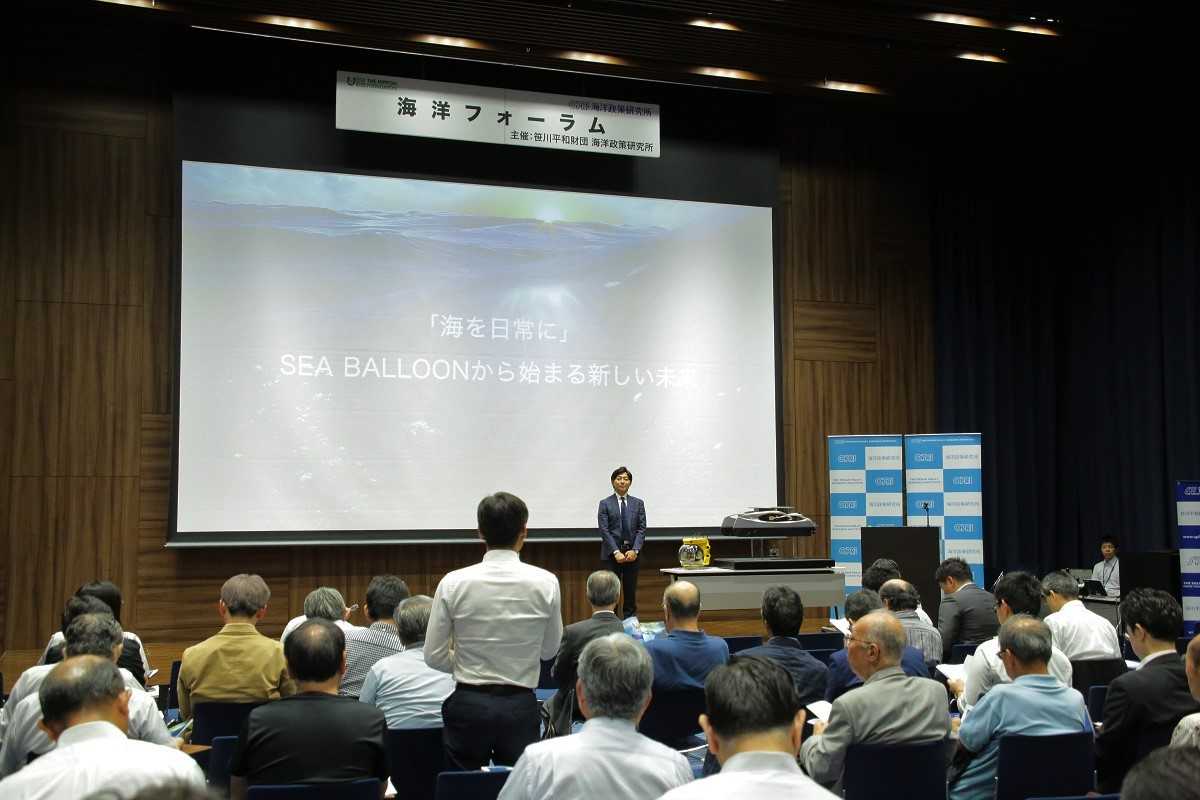 In the session following the lecture, Mr. Yonezawa gave responses to questions from the floor, regarding the vessel registration and classification process, operation details, potential profitability, mechanism, and more. Many participants also expressed their excitement toward the development and operation of the Sea Balloon. Mr. Yonezawa concluded by saying that he and his team are looking forward to sharing more news regarding Sea Balloon later in the year, in line with the plans to unveil the first official trip in 2021.
(Satoko Takahara, SPF PR)