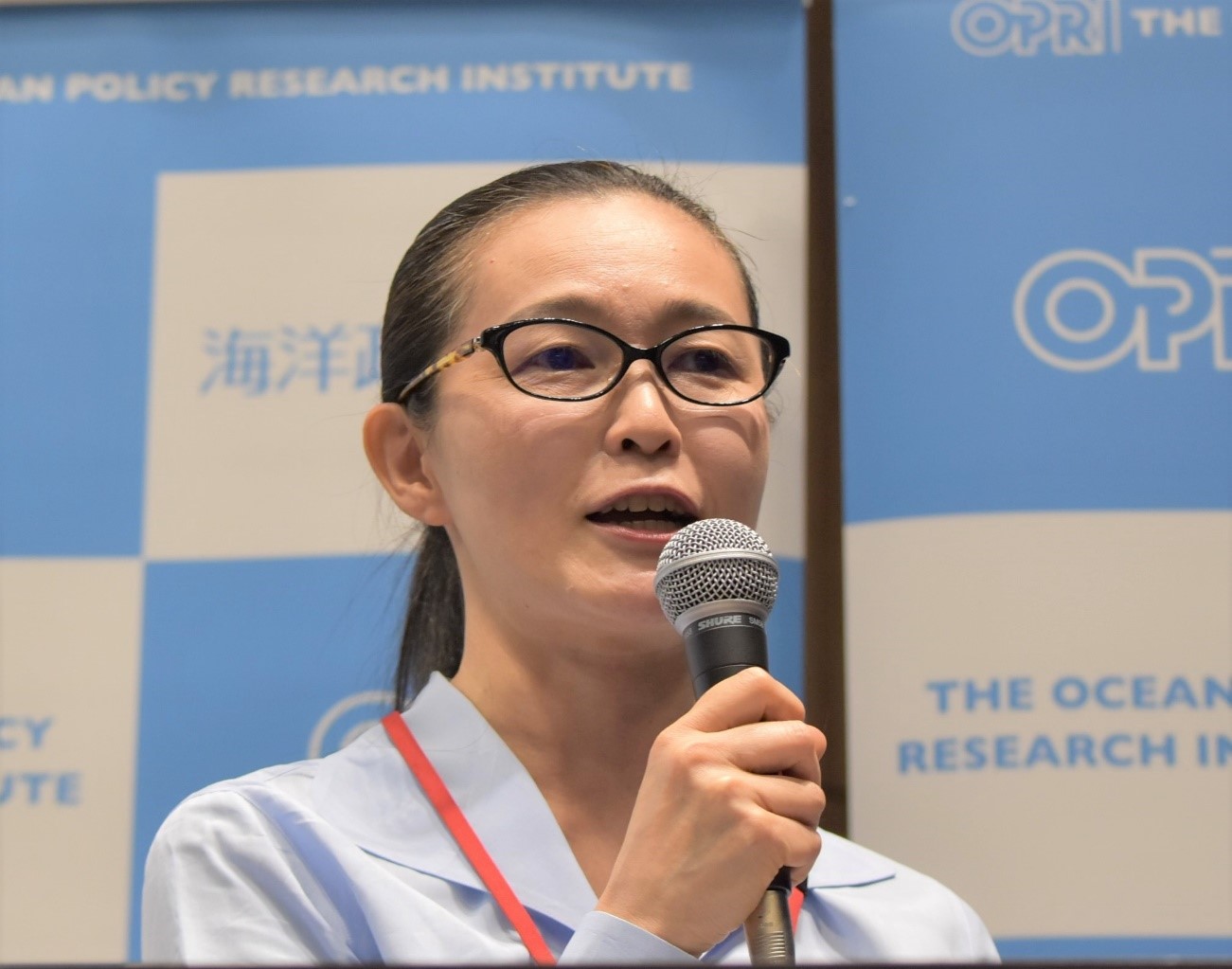 The Ocean Policy Research Institute (OPRI) of the Sasakawa Peace Foundation (SPF) held an “Ocean Forum” on July 10, 2019, inviting Dr. Naomi Harada, director of the Earth Surface System Research Center at the Japan Agency for Marine-Earth Science and Technology (JAMSTEC), to speak on the theme of “Marine ecosystems and material circulation in the Arctic region – Changes from the past to the present.” At the forum, Dr. Harada, who served as the deputy leader of the 60th Japanese Antarctic Expedition team, gave a lecture on the effects of global warming and increased greenhouse gas emissions on the ecosystems in the Arctic region.

While human activity has driven rapid, large-scale changes in the earth's environment, climate change in the Arctic region has been accelerating at more than twice the rate of the global average, resulting in widespread melting of sea ice. Further, the annual average water temperature in the Arctic Ocean between 1982 and 2017 has risen 2.7 degrees Celsius, which is 2.7 times higher than the average rate in the northern hemisphere.

The size and volume of ice in the Arctic Ocean during winter has also been decreasing, which affects not only the organisms living on the sea ice, but also results in a range of broader environmental impacts including a decrease in the salinity of the water and increasing light penetration in the oceans. As the ice covering the oceans melts, the amount of natural light in the water increases, ultimately setting off a chain reaction that impacts phytoplankton at the bottom of the food chain, zooplankton, and so on. According to Dr. Harada, these changes have the potential to impact the entire ecosystem of the Arctic region, reaching organisms at the highest tier of the food chain including humans. 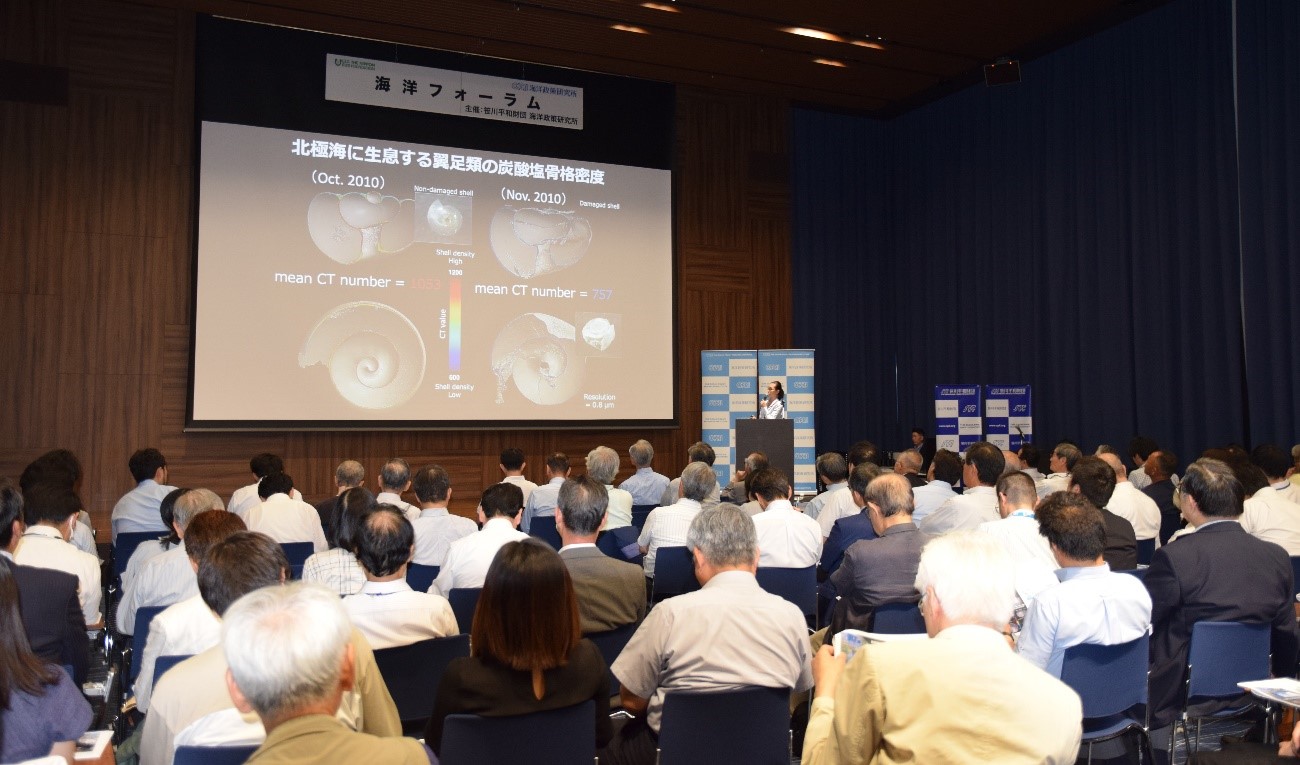 While the ocean is naturally alkalescent rather than acidic, the amount of carbon dioxide dissolving in the ocean has increased along with rising levels of carbon dioxide emissions. As the concentration of hydrogen ions in the water increases, the ocean’s overall pH level decreases, bringing ocean waters closer to a neutral or acidic state in a process known as the ocean's buffer action. As a consequence, the amount of carbonate ions in the water drops, resulting in a situation called carbonate undersaturation, or a continuous lack of a solid calcium carbonate. This means that organisms with calcium carbonate shells and skeletons composed of carbonate ions and calcium will have difficulty forming their skeletal structures and may dissolve. Since carbon dioxide dissolves more efficiently in colder waters and the increasing melting of the sea ice has also contributed to the drop in the ocean's pH levels due to dilution effect, the acidification process is progressing at a much faster pace in the Arctic.

Regarding impacts to the ecosystems by the rapid changes in the Arctic Ocean, Dr. Harada observed that some changes are positive or negative, while the consequences of other shifts have yet to be determined. Dr. Harada said that the negative impacts include decreases in the absorption rate of carbon dioxide in the Arctic Ocean due to the increase in coccolithophores, as well as a drop in the overall number of organisms living on the sea floor. 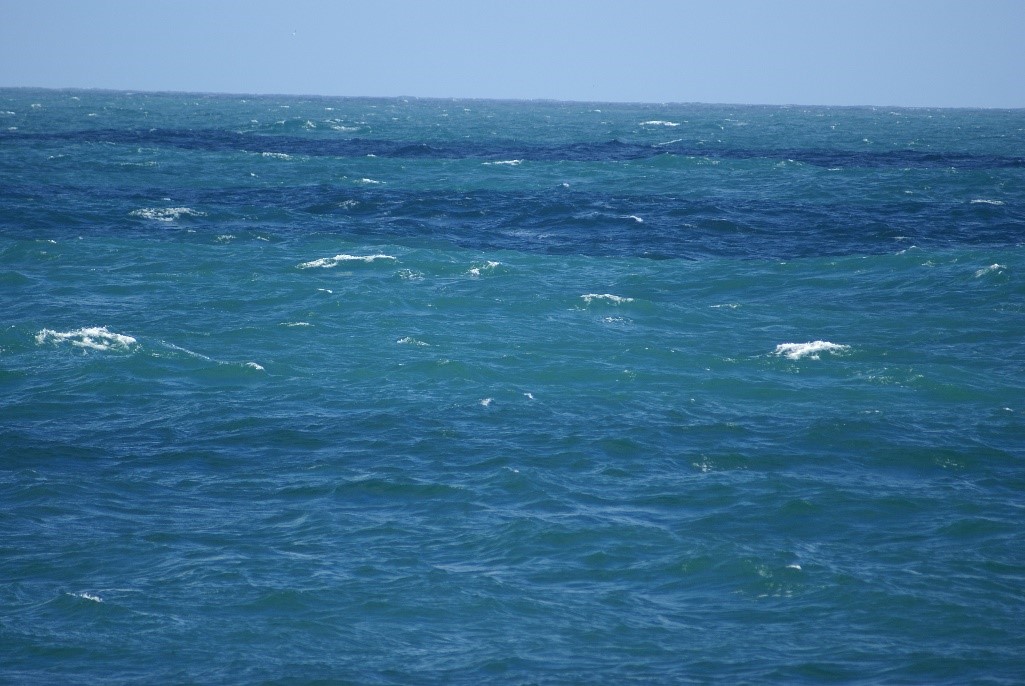 Another consequence of the emerging coccolithophore blooms is that they diffuse the light in the ocean, leading to a decrease in the feeding rates of zooplankton. Salmon shoals have also been observed to be avoiding the area near the blooms, pointing to a potential situation that could impact the entire ecosystem of the Bering Sea. In addition, there is concern regarding the impacts of ocean acidification on a type of sea snail called Pteropoda. The shells of these snails are made of aragonite, and it has become apparent that the density of the shells has been decreasing. 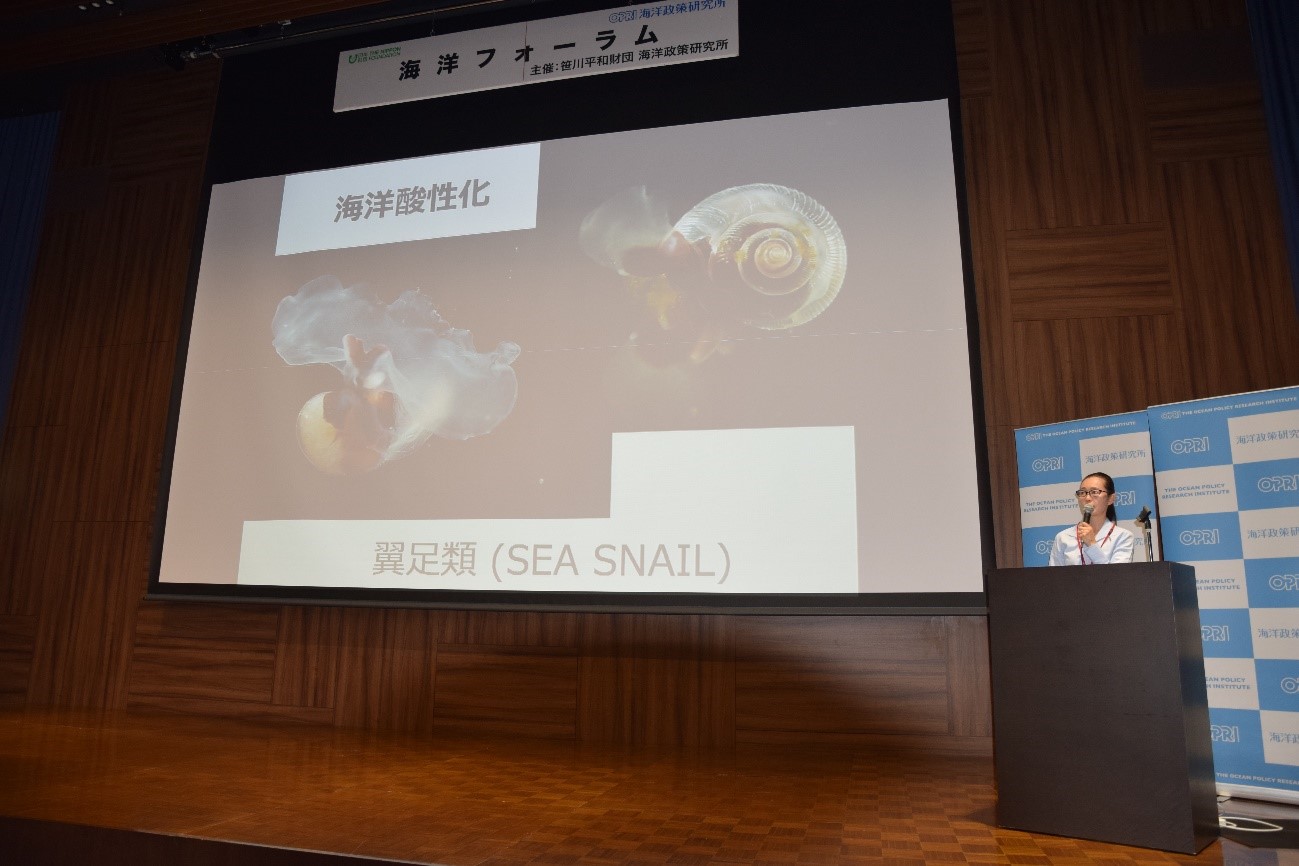 According to research results from 2010, in the seasons where ocean acidification occurs most rapidly – the beginning of sea ice season when Arctic water temperatures are low and the summer when sea ice melts – the shell density of these snails decreases by around 40%. In addition, pteropoda use their shells as weights to go deeper in the ocean and breed, which means that these lighter shells resulting from ocean acidification may not only limit their overall chances for survival, but may also prevent them from reaching breeding grounds deeper in the ocean.

Dr. Harada also discussed changes underway in the Arctic region which have not yet been determined to be positive or negative, including changes in the nitrogen cycle and form of existence in the ocean.

Currently, the nitrogen cycle on earth is largely off balance due to human activities including widespread use of artificial nitrogen fertilizer and fossil fuels. The nitrogen that has become abundant on land ultimately makes its way to the ocean through the rivers and atmosphere, leaving impacts on the nitrogen cycle in the ocean. When nitrogen dissolves in the ocean, this results in a chemical reaction that creates ammonia, which then oxidizes to become nitrite and nitrate in a process called nitrification. These are referred to as nutrient salts, and are important nitrogen nutrient sources for organisms in the ocean.

Nitrification occurs most often in areas with low light, and conversely, is generally contained when light is strong. While the melting of sea ice allows more light to penetrate into ocean waters, this results in a decrease in the speed of nitrification, slowing the rate that ammonia transforms into nitrite and nitrate. When comparing research results from high and low concentrations of sea ice condition, the results for low concentration of sea ice show an increase in ammonia levels. However, the ultimate impact this pattern may have on the ecosystems in the Arctic region remains unclear.

Dr. Harada also presented a surprising discovery made by her team during their research on the nitrogen cycle. While there are living things in the ocean that utilize ammonia as a source of nutrients, other organisms are able to live off of nitrogen gas through a process called nitrogen fixation. This process was generally thought to occur in oceans with low nutrient levels, such as in the tropics and subtropics. However, as Dr. Harada and her team continued their research on the nitrogen cycle in the Arctic, it became apparent that even in colder regions some organisms conduct nitrogen fixation, though they are different in type than those in the tropics and subtropics. This was a discovery that could shake the basis of research that has been conducted on nitrogen fixation up until now.

Positive impacts and the “generalization” of the Arctic Ocean 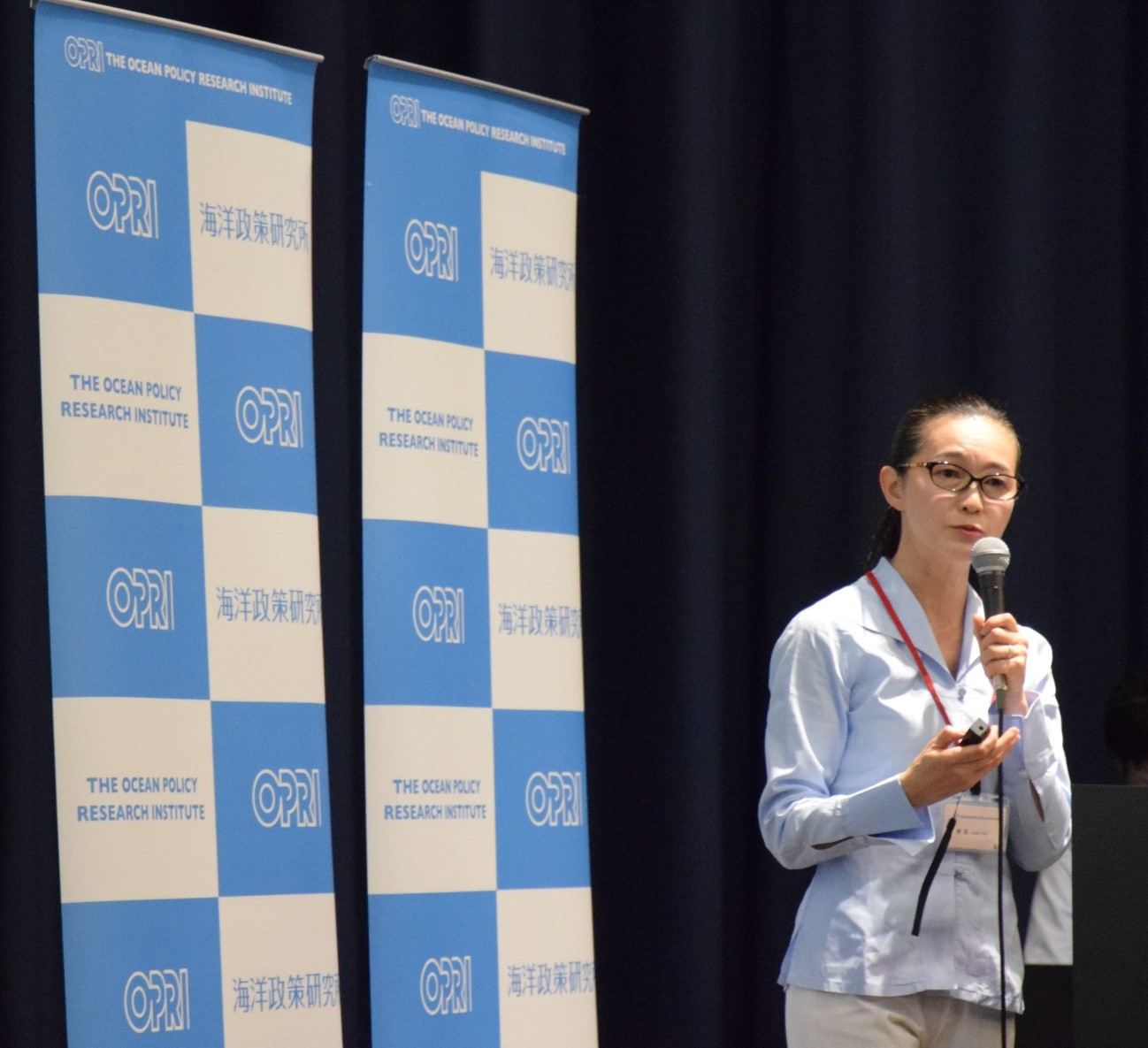 Dr. Harada during the lecture

Dr. Harada also outlined some potential positive impacts of these changes in the ocean, including the example of increased productivity of marine organisms due to an increase in the volume of eddies in the Arctic Ocean.

When compared to the 1990s, the volume of eddies in the Arctic Ocean has increased substantially following the melting of sea ice, which led to a significant increase in the air-sea interaction (area of the ocean being exposed to the atmosphere). As a result, nutrients in the subsurface ocean are carried to the surface of the ocean through enhanced lateral transportation, causing an increase in the productivity of phytoplankton and zooplankton, which could be seen as a positive impact for the living activity in the Arctic Ocean. “With the melting of sea ice, the Arctic Ocean has perhaps become part of a more general ocean,” said Dr. Harada when discussing this as a potential positive impact of climate change.

Based on the current changes in the Arctic Ocean, Dr. Harada argued that these various changes impacting the marine ecosystems in the Arctic Ocean could be potential areas for further research. Unfortunately, with predictions pointing to an increasing loss of sea ice resulting in rising sea-levels, scientists must also contend with the complicated responses likely to be observed by organisms due to these ongoing changes.

To conclude, Dr. Harada reflected on her experiences from the Japanese Antarctic expedition team’s observations on issues such as ocean acidification, the nitrogen cycle in the ocean, and impacts from warming, and expressed hope to “continue progress on the research on oceans in polar regions including the Arctic Ocean.”
Ocean Policy Research Inst. News Northeast Asia Arctic
Share