"Ocean Forum" on Sustainable Fisheries and Reform to Fisheries Law

Issues Surrounding Japan’s Fisheries Industry and Hopes for the Future 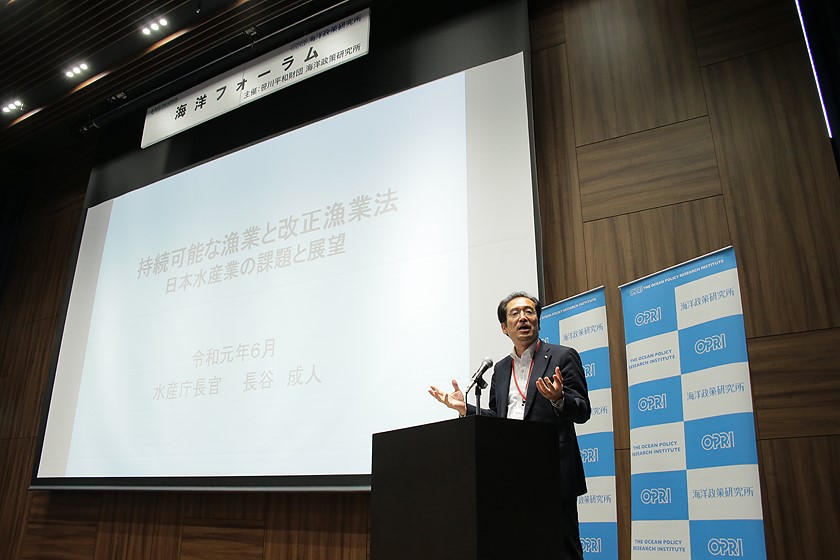 The Ocean Policy Research Institute (OPRI) of the Sasakawa Peace Foundation (SPF) held an “Ocean Forum” on June 14, 2019, inviting Mr. Shigeto Hase, Director-General of the Fisheries Agency, to give a lecture on the theme of “Sustainable Fisheries and Reform to Fisheries Law – Issues Surrounding Japan’s Fisheries Industry and Hopes for the Future.”

In December 2018, Japanese regulations underwent a significant change following reforms to the fisheries law for the first time in 70 years. OPRI Senior Research Fellow Masanori Kobayashi, who served as moderator of the forum, commented that the law “has attracted much attention both in and outside of Japan, as a way of providing a framework that can realize a more sustainable form of fisheries performed by motivated fishermen.” In addition, he introduced Mr. Hase, saying that “according to many officials, Mr. Hase’s honest and easygoing character and his strong passion for working toward the realization of sustainable fisheries has played a key role in advancing the adoption of the newly reformed law.”

After graduating from Hokkaido University’s School of Fisheries Sciences, Mr. Hase entered the Ministry of Agriculture, Forestry and Fisheries as a technical official in 1981, building his career mainly in the fields of fisheries coordination and resource management, and eventually rising to become the director-general in July 2017. “It is the first time in 60 years that a technical official has become the director-general,” he explained. 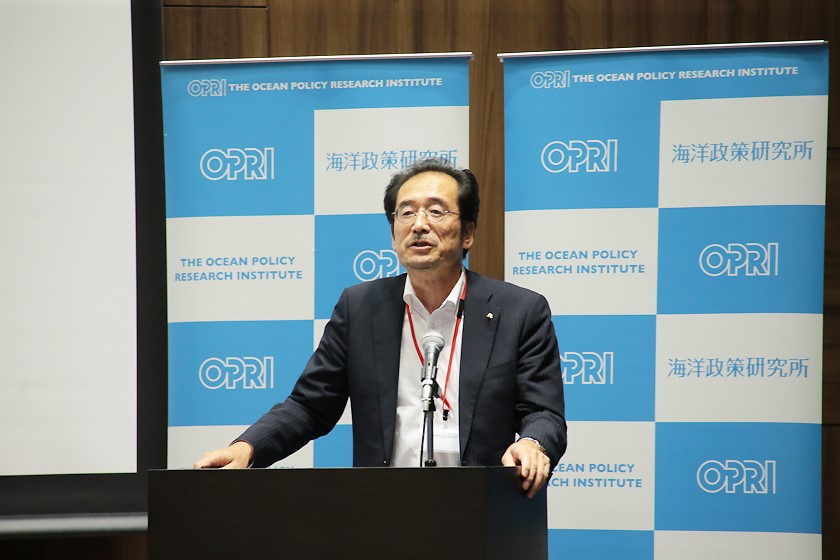 One of the primary themes of the lecture was the question of what motivated the reform in Japan’s fisheries policy.

According to Mr. Hase, “the situation surrounding fisheries has largely changed,” driven by factors including changes in the global environment, which has largely affected the fish population; the increased activities of foreign fishing boats in waters around Japan; and the fact that Japan has officially entered a period of population decline, posing a huge problem for the fisheries industry as part of the larger food industry. With this backdrop, Mr. Hase commented that the new reform “aims to balance the appropriate management of fisheries resources and the development of the fisheries industry in order to create a fishery employment structure that can see both increases in income as well as a more balanced age distribution among fishery workers.”

Fisheries situation in Japan and the world

When discussing the overall situation for fisheries around the world, Mr. Hase explained that the global population and consumption of seafood is increasing annually, and the overall demand for seafood is expected to continue increasing in future. In addition, ocean fishery production has peaked, with an increase in aquaculture predicted for the future.

On the other hand, looking at Japan’s total fisheries production, the peak was 12 million tons in 1984. After this, the total production has continued to decline, with the total in 2016 reaching 4.36 million tons, which represents a 270,000 ton decrease (6%) from the previous year.

In the waters surrounding Japan, good fishing grounds are formed thanks to the interactions of the Oyashio and Kuroshio currents, which bring an abundance of nutrients and fish to the region. The total area of the exclusive economic zone (EEZ) including the territorial waters amounts to 447 square kilometers, which ranks sixth in the world. However, in addition to the fact that the EEZ borders with countries including South Korea, China, and Russia have not been officially agreed upon, these waters also face North Korea, with which Japan does not even have diplomatic relations.

Due to these complicated circumstances, there has been an increase in the activities of foreign fishing boats. “In the Yamatotai region in the Sea of Japan, we give expulsion warnings to foreign fishing boats entering Japan’s EEZ,” explained Mr. Hase. “If they do not comply, the Fisheries Agency along with the Japan Coast Guard push back through use of water cannons. This kind of defense has been taking place on Japan’s waters.” The Fisheries Agency alone issued expulsion warnings to 5,315 boats in 2018 and used water cannons on 2,058 boats.

He also mentioned that one of the characteristics of Japan’s fisheries is that “set-net fishery, a traditional method of fishing that is said to be 300-400 years old, makes up around 40% of coastal fisheries.” Set-net fishery, which involves setting a net and catching the fish that enter, is a fishing practice that “does not require fuel in comparison to the use of fishing boats to go offshore to catch fish,” but also presents difficulties in terms of management of total catch as it is a passive form of fishing method.

During an explanation of the contents of the reform, Mr. Hase noted that one of the pillars for developing future fisheries is effective resource management. “Limiting the amount of fish caught will allow for the continuance and increase in resources, and realize stable fisheries.” In order to do this, he said that “instead of looking at the number of fishing boats, there will be a bigger focus on the total allowable catch (TAC) program that limits the actual catch.”

In addition, referencing several cases from the United States and countries in the European Union, Mr. Hase said that the goal for resource management in the future will be set as the most sustainably allowed catch under the current environment (Maximum Sustainable Yield, or MSY). Therefore, the challenge will be how to determine a TAC that realizes this standard. “This is under the assumption that there will be an increase in resource surveys,” explained Mr. Hase, also noting that “research organizations will calculate target levels that allow for a larger and more stable catch, with the hope that stakeholders and governments will work together toward this goal.”

He also raised the urgent issue of strengthening fisheries diplomacy. In 2013, Taiwan passed Japan as the leader of Pacific saury catch, and Mr. Hase explained that “it is not very persuasive to ask Japanese fishermen to limit their catch while seeing Chinese and Taiwanese fishing boats catching fish in a disorderly manner on the high seas adjacent to Japan.” The Fisheries Agency has proposed the introduction of a catch limit on the high seas to the North Pacific Fisheries Commission (NPFC), where eight members including Japan, China, and Taiwan discuss resource management, but a decision has not yet been made.
(Note: At the Fifth Annual Session of the NPFC that took place in July 2019 in Tokyo, based on a proposal by Japan, the members agreed to set the total limit at 550,000 tons, and limit the total catch on the high seas to 330,000 tons, effective in 2020.)

Moving forward, an individual quota (IQ) system will be introduced focusing mainly on offshore fisheries. In addition, there will be a review of the fishing license system and efforts to eliminate barriers that have prevented the introduction of large-sized fishing boats, such as vessel-tonnage limits, which were intended to improve safety. Mr. Hase also stressed the need to “create fishing boats with better working conditions that make use of the newest technologies in order to attract young people.”

Regarding aquaculture and coastal fisheries, Mr. Hase said that “while retaining the fishing rights system, there will be a review of the use of ocean waters in coastal areas,” and said a framework would be provided where motivated fishermen, individuals, as well as organizations involved in the development of local communities can participate in coastal fisheries and aquaculture. With the arrival of a period of population decline in Japan and the decrease in the number of people involved in fisheries, the reform aims to encourage the effective use of coastal waters that are seeing decreased use for fisheries, with the idea to “protect the rights of those who are utilizing the waters properly and effectively, but also to strategically reconstruct aquaculture in anticipation of demand both in and outside of Japan.”

In addition, there will be efforts to encourage effective use of waters that make use of new technology, with Mr. Hase mentioning that “pilot operations for offshore aquaculture utilizing the latest technologies, including AI, are already taking place.”

Regarding the distribution and processing of fishery products, Mr. Hase commented that there will be efforts to “promote production that keeps in mind the growing overseas markets.” In addition, to tackle the critical issue of illegal activities by foreign fishing boats, Mr. Hase announced plans to “streamline a catch certification scheme and create a system that makes traceability possible,” including ongoing preparations to include these proposals in the next law reform.

Lastly, Mr. Hase stated that he hopes to “raise the stock levels of fishery resources while keeping foreign markets in mind, create a fishing industry that is appealing to the younger generation, and continue to develop fisheries in a sustainable way.” Expressing hope for the future, he said, “an increase in budget was approved for FY 2019 despite difficult conditions. In an effort to make sure that this increase is not a transient one, I hope to take on new efforts while gaining understanding.” 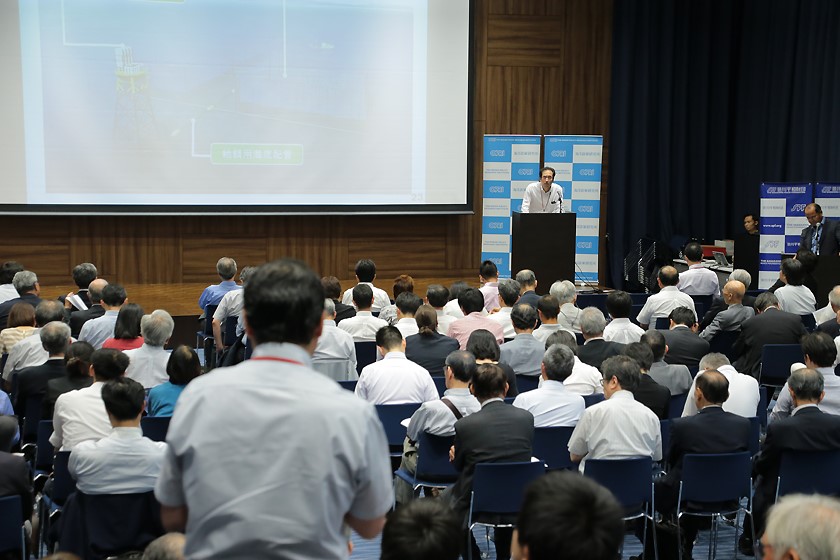 In response to questions

During a session following the lecture, Mr. Hase answered a range of questions from the audience. A fishery worker asked a question about changes to the sea-level surface utilization program, specifically concerns that new use of lesser-used sea-level surfaces would largely change the current environment. In response, Mr. Hase emphasized that “those who are properly and effectively utilizing the fishing areas will receive priority in licensing,” and explained that “the program includes planning for effective surface use by organizations such as fisheries cooperatives that understand the situation in the communities, as well as measures to identify and report on the situation regarding their exercise of this right.”

There was also a question regarding the decision by the appellate body of the World Trade Organization (WTO) in April 2019, which reversed the earlier ruling by a dispute settlement panel that called for the lifting of South Korea’s import ban on some fisheries products from Japan that were implemented following the meltdown at the Fukushima Daiichi Nuclear Power Plant. Responding to a question on the influence of this reversal, Mr. Hase said that the WTO ruling was “extremely regretful,” but also commented that the Philippines lifted an import ban in May on selected fish species including Ayu (sweetfish) from Fukushima, and stated the intent to “carefully monitor [the fisheries products’] safety and disseminate information on the topic.” He followed up by saying that while the decision has “disappointed those in the disaster-struck areas, we hope to continue supporting them in a different way.”
Ocean Policy Research Inst. Northeast Asia
Share