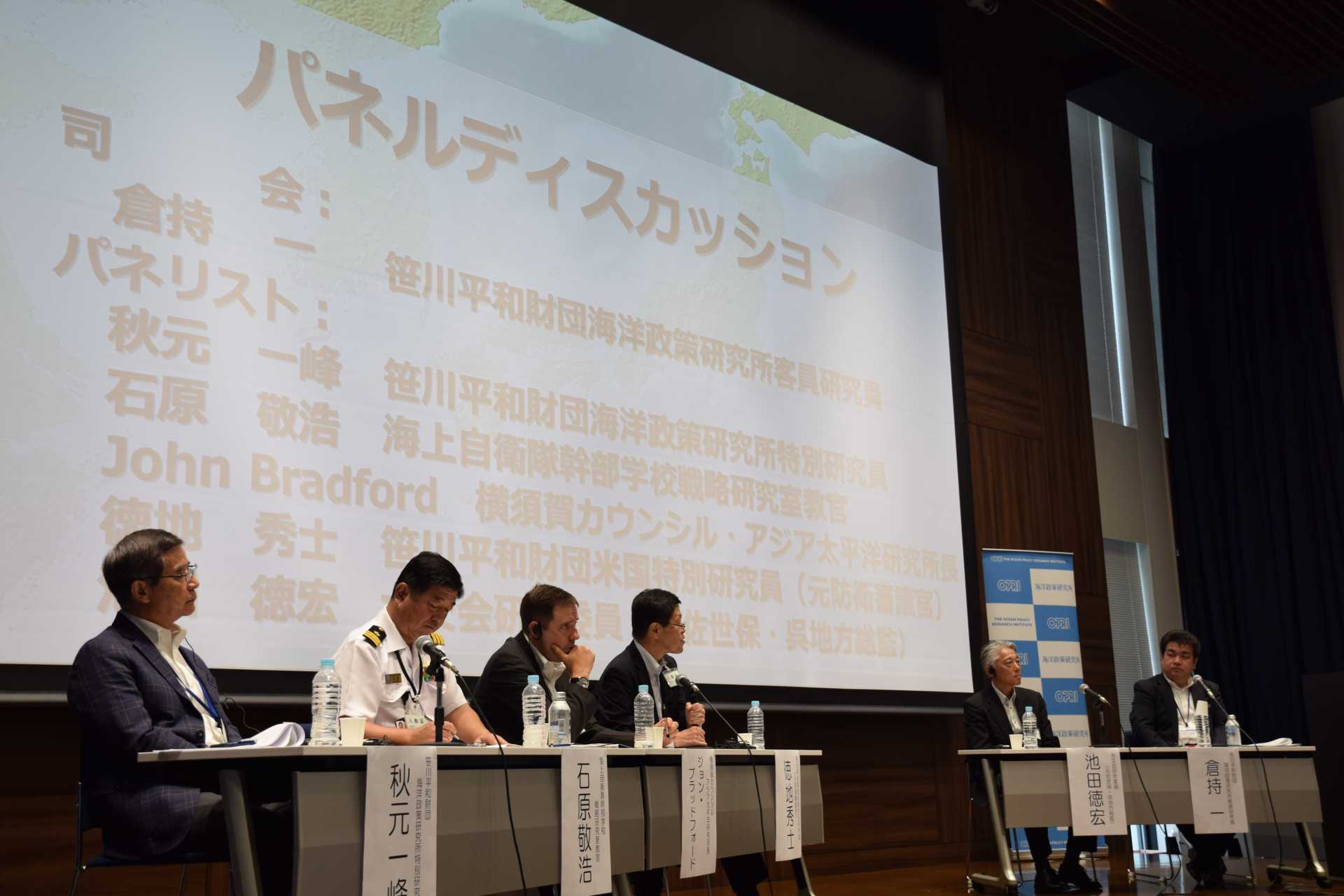 The Symposium saw meaningful discussions on topics including the utilization of the amphibious forces of the Japan Self-defense Forces (JSDF) and the Free and Open Indo-Pacific Strategy.

The Ocean Policy Research Institute of the Sasakawa Peace Foundation (OPRI-SPF) and the Suikoukai co-hosted the “Fifth Maritime Security Symposium” on August 27, 2018, in Tokyo, conducting discussions on the themes of Japan’s maritime security and maritime defense strategy.

In his opening remarks, Admiral Keiji Akaboshi (ret.) (President, Suikoukai; former Chief of Staff, Japan Maritime Self-Defense Force (JMSDF)), said, “The national security surrounding Japan is facing issues such as the various problems stemming from North Korea, and China’s expansion in ocean affairs, with its growing maritime power in the background. On the other hand, it is a period seeing great change, as indicated by improving relations between Japan and China. Domestically, there are also views that we are now at a turning point for re-examining the National Defense Program outline. I hope that today we will see discussions by our expert speakers regarding the role of maritime defense and the use of maritime defense power in the creation of the maritime security environment.”

Following the opening of the symposium, Vice Admiral Hideki Yuasa (President, MSDF Command and Staff College) gave the keynote lecture, in which he raised the versatility of the amphibious forces of the Japan Self-Defense Forces (JSDF), and recommended their use in activities for humanitarian assistance and disaster relief (HA/DR). He emphasized that “The participation of amphibious forces in HA/DR operations will be a valuable opportunity for enhancing their capacities,” adding, “This would also result in increased readiness, strength, and interoperability between the forces of Japan and the United States, and contribute to the national security environment.”

Vice Admiral Yuasa also pointed out issues that the amphibious forces face, including: 1) The need to secure training areas as they are currently lacking in number, 2) The training of its members, and 3) The improvement in integrating Ground, Air, and Maritime forces, including cooperation with the Japan Air Self-Defense Force (JASDF).

In the panel discussion that followed, four panelists offered their opinions.

Rear Admiral Kazumine Akimoto (ret.) (Special Research Fellow, OPRI-SPF), gave the analysis that “China shows three ‘faces’ in its maritime expansion: its hegemonic face in the South China Sea, its cooperative face in the Indo-Pacific region, and its face when assessing the power balance in the Pacific Ocean.”

Upon this analysis, Akimoto stressed the importance of advancing the “Free and Open Indo-Pacific Strategy” advocated by the Abe Administration and proposed a “Three Layered Strategy” regarding China.

For the first layer, Akimoto introduced the “Concert Strategy” that would allow for co-existence between China’s Belt and Road Initiative (BRI) and Japan’s Free and Open Indo-Pacific Strategy. Regarding the second layer, he proposed the “4+4+5 Synchronization Strategy,” consisting of the synchronization of a Quadrilateral cooperative framework (Japan, Australia, India, United States), the Quadrilateral Defense Coordination Group (Australia, France, New Zealand, United States), and the Five Power Defense Arrangements (Australia, Malaysia, New Zealand, Singapore, United Kingdom), which could block China from transforming into its hegemonic face. For the third layer, he presented the “Selective Sealane Defense Strategy” that would aim to maintain maritime shipping in the Indian and Pacific oceans in the event of a so-called “gray zone situation.”

Commander Takahiro Ishihara (Senior Fellow, Strategic Studies, MSDF Command and Staff College), said, “In the current age, it is unlikely to see war using large-scale conventional forces,” and pointed out that China is effectively using so-called “sharp power” methods, including the controlling of public opinion and information, making acquisitions, and issuing threats. Under these circumstances, Ishihara emphasized, “It is necessary to have a ‘strategic communication’ method that can gain the backing of international public opinion and facilitate the assertion of legitimacy.” In addition, he mentioned the importance of continuing to disseminate messages and opinions on the “rule of law,” “free and open oceans,” and “maintenance of ocean governance,” through methods including joint exercises such as the Malabar Exercise conducted with the United States and India.

John Bradford (President, Yokosuka Council on Asia-Pacific Studies) presented on the possibilities of multilateral cooperation in the Indo-Pacific region. Addressing the increased mine warfare capabilities of North Korea, he made the point that Japan, South Korea, and the United States should cooperate in efforts including minesweeping activities.

Hideshi Tokuchi (Distinguished Non-Resident Fellow, Sasakawa Peace Foundation USA; former Vice-Minister of Defense for International Affairs, Japan), addressed responses to gray zone situations and China’s sharp power. Especially regarding gray zone situations, he mentioned the importance of strengthening Japan Coast Guard (JCG) vessels, with assistance from the JMSDF, in order to counteract the current situation in which Chinese vessels are threatening Japan’s sovereignty in waters surrounding the Senkaku Islands. Specifically, he proposed to: 1) Provide the JCG with JMSDF vessels planned to be retired for law enforcement operations, 2) Transfer patrols in other ocean areas to the JMSDF, which would allow the JCG to focus on the waters surrounding the Senkaku Islands, and 3) Support the JCG through efforts such as refueling.

Tokuhiro Ikeda (Research Committee Fellow, Suikoukai) joined in the ensuing discussion, with Hajime Kuramochi (Visiting Research Fellow, OPRI-SPF) at the chair. Concluding the Symposium, Atsushi Sunami (President, OPRI-SPF) commented, “We would like to continue making active efforts in our research activities and the creation of policy recommendations based on the various issues discussed today.”

The Maritime Security Symposium has been held annually since fiscal year 2014, serving as a place for active discussion by JSDF Officials that have worked in the fields of maritime defense, Suikoukai members, and experts conducting research in the field of maritime security. As with previous years, the Fifth Symposium also saw meaningful discussion on important topics.