New Zealand is a country belonging to the Commonwealth (Commonwealth of Nations), and one of the Commonwealth realm, with the British monarch acting as the King of New Zealand and Head of State*1. As shown below, in New Zealand, various ministries and government offices hold authority over different aspects of its ocean policies (See Table 1). While the division of ocean areas in domestic New Zealand law is in principle based on the United Nations Convention on the Law of the Sea (1982), some parts of ocean areas are categorized pursuant to its unique domestic law. According to the domestic law, the foreshore and sea floor, territorial waters and the skies above them are collectively referred to as the coastal area, following the regulations of the Resource Management Act (RMA).

Table 1 Jurisdiction of Ocean Policies among Government Bodies in NZ

Note: Author created this data based on the NZ Ministry for the Environment Website. 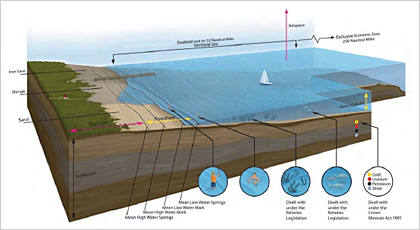 The features of ocean policies in New Zealand from 2012 to 2013 mainly include the enactment of new laws regarding the development of the Exclusive Economic Zone and the continental shelf, and the administrative reform of the procedural system associated with them.