Australia's political system consists of two major parties: the Labor Party and the Liberal Party. While the government has switched back and forth a number of times due to administration change, it has managed to consistently implement policies that place importance on the conservation of the environment. In addition to managing the country's suddenly expanded Exclusive Economic Zone (EEZ) following the ratification of the UN Convention on the Law of the Sea (UNCLOS) in the mid-1990s, activities in the ocean increased, leading to social appeals to reform the administrative framework on ocean matters*1, which had been divided and disharmonious. The Keating government of the Labor Party launched studies into implementing an ecosystem-based management system for all territorial waters and the EEZs of Australia under the government's cross-sectional structure. Even after the government transitioned to a conservative coalition under the leadership of then-Prime Minister Howard's Liberal Party in 1996, it maintained the ocean policies of the previous government, announcing a policy guideline titled "Australia's Oceans Policy" in 1998. The goals of "Australia's Oceans Policy" were to care for, understand and use the ocean wisely, and it was both innovative and ambitious in attempting to comprehensively manage territorial waters and the EEZs. However, since there were difficulties in adjustments between the federal and state governments on regulating the waters subjected to the policy, it ended up excluding the waters under the jurisdiction of states*2. Moreover, since "Australia's Oceans Policy" was positioned as an Issues Paper without basis laws, voluntary cooperation from relevant authorities was needed to implement the policy, which also presented various obstacles *3.

Concerned with such a situation, in 2004 the federal government began revision of "Australia's Oceans Policy." In 2005, it focused attention on implementing a management system for ocean ecosystems and initiated "Marine Bioregional Planning,"*4 based on the Environment Protection and Biodiversity Conservation Act. The plan classified the waters and EEZ sea region under the jurisdiction of the federal government into 6 marine regions*6 based on large marine ecosystems*5, implementing the most effective environmental protection and biodiversity conservation measures for the ecosystem in each region. In the process of formulating the plan, issues were identified and prioritized, using accumulated scientific data on the vast ocean and ecosystems, and a management plan was created, including the establishment of marine reserves. While there were slight delays in progress in the following years due to the transitioning of the government to the Labor Party, "Marine Bioregional Planning" was carried out smoothly under both the Rudd and Gillard governments. In November 2012, the draft for the Commonwealth Marine Reserves Network*7, based on "Marine Bioregional Planning," was approved by parliament, leading to the official establishment of the "Commonwealth Marine Reserve." This led to the setting up of 40 new marine reserves including the largest one in the world, which spans approximately 990,000 km2 of the waters surrounding Australia. As a result, the area of the marine reserves in federal waters which had been roughly 800,000 km2 expanded to 3,100,000 km2, leading to major progress in Australia's ocean environment conservation initiatives. In March 2013, a 10-year management plan for the entire ocean area was approved by the Minister for the Environment and was awaiting a final approval by parliament so the Commonwealth Marine Reserve could come into effect in July 2014.

Federal parliament held deliberations in June 2013 to acquire approval for a draft management plan for ocean areas of the Commonwealth Marine Reserve. The opposition conservative coalition that controlled the majority of seats in the House of Representatives (lower house) opposed approval of the plan, taking into consideration the perspectives of fishing industries and recreational fishing associations, and claiming that it was unscientific and would cause a major negative impact on the economy. In the months leading up to the general elections, the Labor Party and conservative coalition carried out fierce maneuvers to gain votes, with the Labor Party succeeding in persuading the Greens and independent members to just gain approval for the plan by the margin of a single vote.

The Commonwealth Marine Reserve was one of the focal issues in the general elections for the federal parliament in September. During the election, Liberal Party leader Tony Abbott followed the conservative coalition in strongly opposing the establishment of the Commonwealth Marine Reserve, pledging that he would revoke the plan once he was elected. This promise was well received by recreation fishing associations and fishery affiliated associations holding major political influence but was heavily criticized by academics and environmental conservation groups, as they believed it went against the environmentalism that Australia had worked for, and that it was irresponsible to scrap the plan actively promoted by the previous Labor Parliament at its final stage.

Following their dominant victory in the election, the conservative coalition began work on amending the Commonwealth Marine Reserve under the principle of making the fisheries sector sustainable and competitive in accordance with their pledge. Parks Australia, the lower branch of the Department of the Environment that holds jurisdiction of national parks, released information on its website on the "Review of the Commonwealth Marine Reserve" in December, which revealed that the new "Bioregional Advisory Panel" would formulate a new management plan for all waters excluding the south eastern ocean area*8, and that the specifics regarding who would be selected to be on the panel, etc. would be released in early 2014.

Another major event in Australia regarding the ocean came in the form of disputes surrounding the development plan on the Great Barrier Reef, which is a symbol of the country's ocean conservation policies. The Abbott government gave approval in December 2013 to expand facilities in the harbor for coal delivery in Bowen, Queensland, and to dump dredge soil of 3,000,000 m3 into the Great Barrier Reef, a World Heritage Site*9. While the government claimed that scientific data proved the development would cause no impact on the coral reef, the investigative report consigned by the government, submitted in July 2013, stated a possibility that the dredge soil dumped would be carried much further than previously thought, and silt would deposit into the coral reef*10. Fearing this decision, the United Nations Educational, Scientific and Cultural Organization (UNESCO) requested the submission of a new report from the Australian government regarding its initiatives towards environmental conservation, to consider whether to add the Great Barrier Reef to the List of World Heritage in Danger*11. Furthermore, the areas in which soil would be dumped included the breeding grounds of endangered green turtles and flatback sea turtles as well as the habitat of the endangered dugong, causing great concern to environmental conservation groups as well as the general public*12.

Regarding Australia's movements on territorial right claims over the Antarctic territory (Figure 1), Abbott for some time indicated that he wanted to pursue a policy that would strengthen governance over the territory, advocating ahead of the election the need to upgrade research facilities and to improve the infrastructure of Tasmania, a base for governing the territory. After the change in government, it officially made the decision to invest 87 million Australian dollars on public work projects, including 24 million Australian dollars on a new South Pole and Antarctic Ocean Research Laboratory, and 25 million Australian dollars on a collaborative research institute on the climate and ecosystem of the South Pole*13. Furthermore, the government started work on a document titled the "20 Year Australian Antarctic Strategic Plan" and announced that it would be released by a team of specialists in July 2014. 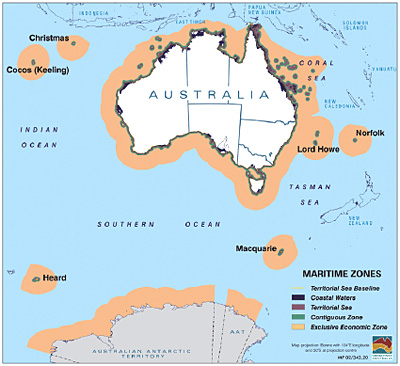