A Consensus on Climate Change

In 2021, scientists from around the globe came to a consensus on the ways the climate is changing and why. The 6th IPCC Assessment Report is an unequivocal reminder that human influence is causing climate change. It confirms what our citizens have been feeling for years: the climate is already changing, and its impacts are rapidly intensifying.

The call for action is clear and loud. The Japanese Meteorological Research Institute (MRI) reports that in recent years Japan has experienced more frequent and stronger typhoons as well as record temperatures and floods resulting in devastating landslides and loss of life. Similar extreme events have been increasing in the United States. We have seen record wildfires, flooding, and extreme temperatures this past year. Addressing the climate crisis is a top priority for President Biden, demonstrated by his prompt organization of the Leaders’ Summit on Climate and his immediate re-joining of the Paris Climate Agreement. While we are already certain to face increasingly significant impacts of climate change across the globe, we have a narrow window to avert more deadly and costly consequences.

It is clear that strengthening the partnership between the U.S. and Japan is vital to making progress in both mitigating and adapting to the climate crisis. Prime Minister Suga was President Biden’s first state visit at the White House in Washington, D.C. on April 16, 2021, and climate was at the forefront of their conversation. We must rise to meet the goals set forth by the U.S.-Japan Climate Partnership, which explicitly calls for cooperation across public and private sector finance to create a net-zero future and build climate resilience. Climate science is essential to meeting other goals of our partnership, including the economic recovery goals of the U.S.-Japan Competitiveness and Resilience (CoRe) partnership.

The climate crisis is notably an ocean crisis. The ocean plays a critical role in climate change mitigation: it has absorbed approximately 23% of annual emissions of anthropogenic carbon dioxide and 90% of the excess heat caused by those emissions. Ocean and coastal ecosystems collectively serve as the planet’s largest carbon sink, but this capacity is not limitless. More than 80% of the ocean experienced heatwave conditions in 2020, and the accelerating rate of ocean deoxygenation and acidification is also primarily caused by ocean uptake of CO2. Ocean-based mitigation of climate change is an essential part of a net-zero future, and there is much work to be done to understand potential nature-based solutions.

The U.N. Decade of Ocean Science for Sustainable Development is a call to address the gaps in our knowledge of the ocean-climate nexus. The Decade is an opportunity to pursue ‘the science we need for the ocean we want’. The Sustainable Development component is an important reminder that the purpose of ocean science under the Decade is not science for curiosity’s sake; rather, it is science for society’s sake.

Our scientists have long collaborated to accelerate developments in ocean and climate sciences. Japan and the U.S. have a long record of making history in climate science; this fact is exemplified by Japanese-born-and-educated American Dr. Syukuro Manabe (formerly a researcher at NOAA). We congratulate him on the 2021 Nobel Prize in Physics "for the physical modelling of Earth's climate, quantifying variability and reliably predicting global warming,” and now we look to the future generations of U.S. and Japanese scientists who will carry on this sterling tradition of science leadership.

Challenges remain in understanding the role of the ocean in climate change, as well as impacts of climate change on our ocean, its resources, and the communities that depend on them. As we continue to drive scientific progress, we must help society use what we know about changes in the system to adapt and build resilience. This requires transdisciplinary research involving innovative and non-traditional approaches, informed by the needs of stakeholders, and effective engagement, education, and communications strategies on the part of our scientific institutions.

The new blue economy— built upon the data, information, and knowledge that we derive from the ocean—presents us with opportunities to create innovative new climate-smart products, services, and businesses in traditional and novel blue economy sectors.

Building the new blue economy while simultaneously addressing the climate crisis requires a co-designed, agile ocean and atmospheric observing system created through a user-focused-and-driven process. Integration of ocean and atmospheric observing systems has been recognized by the Global Ocean Observing System (GOOS) community and the World Meteorological Organization (WMO)-Intergovernmental Oceanographic Commission (IOC) Joint Collaborative Board (JCB) as a foundational next step in delivering next-generation climate, ocean, and weather products for society (Figure 1). Building on existing and new observing networks, we must break down walls not only between ocean research and meteorological communities at both the national and international levels, but also between observing, research, modeling, and socioeconomic/behavioral disciplines. 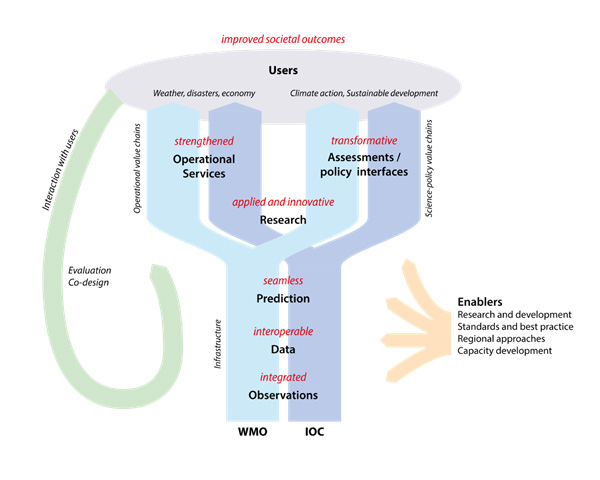 Meeting the Climate Crisis through the U.S.-Japan Partnership

To achieve success, a refreshed paradigm is needed to clearly articulate the added value of collaboration and identify the impacts and benefits for our two nations, and for our Indo-Pacific allies. We can co-design the next-generation observation systems across the Pacific and Arctic, conscious of the data that are needed to inform both ocean and climate models, policy, and socioeconomic management tools. We can explore the role of oceans as solutions to the climate crisis by considering marine and coastal blue carbon, which has the potential to offer co-benefits for mitigation, adaptation, biodiversity, and resilience. Our two nations each have impressive legacies of ocean research, and we have demonstrated effectiveness of collaboration many times over the years, in addressing challenges including marine resource management and natural hazard mitigation. Joint efforts by the U.S. and Japan have the power to transform climate science and services by the end of the Ocean Decade in 2030.

To this end, we invite Japan to meet in 2022 and explore synergies with the U.S. National Oceanic and Atmospheric Administration (NOAA) and our partners across the full chain of observations, research, modeling, forecasts, product delivery, applications, and assessments to support climate adaptation and resilience and achieve more than either of us can possibly achieve alone. As the Proverb says, to go fast, travel alone; however to travel far, you must travel together. During my tenure as NOAA Administrator, I would be honored to travel together with my Japanese colleagues to shape an enduring, far-reaching, and multi-disciplinary collaboration to help tackle the global climate crisis.