Japan’s marine products industries are experiencing a dearth of workers. The fishing villages that used to function as suppliers of workers are struggling and failing to nurture successors. In these circumstances, foreign laborers are seen as an immediately available workforce and are considerably growing in number. However, this risks becoming a warning sign for the continuity of Japan’s marine products industries. In this article I would like to analyze the current situation, as well as examine issues such as the shortage of licensed mariners and the COVID-19 restrictions on immigration and their “side effects”.

Japan's marine products industries are made up of fishing, including aquaculture, and fish processing, in which the resources provided by the fishing industry are processed into food and related products. All of these fields are currently seeing increasingly severe labor shortages.

In coastal and set net fisheries, a slump in fishing income has created a shortage of successors. There is also a growing shortage of labor for land-based work related to cultivating shellfish such as oysters and scallops in the aquaculture industry. Primary factors include aging and emptying out of fishing villages (fishing communities around ports) against a backdrop of declining birthrates and an outflow of young people to urban areas. As of 2019, the proportion of elderly in fishing villages reached 39.7%.

The offshore fishing industry is suffering from a shortage of human resources as well, due to the harsh working environments. These industries are struggling to secure young and mid-career crew members, casting a dark shadow on the industry's sustainability. In pelagic fisheries, the deterioration of the business environment under the 200 nautical mile EEZ system has also meant a reduction in labor costs in the interest of cutting overall costs.

The harsh realities of the fishing industry are seen in the decline in fishery worker numbers, which dropped by 53.3% in just a quarter of a century. As of 2018, personnel numbers fell to 151,701.

The fish processing industry is also vulnerable to this increasingly severe situation. Many fish processing plants are located in coastal areas, and their main labor force was from residents of communities around fishing villages and fishermen’s family members. However, it has become difficult to secure stability in the labor force due to the aforementioned issues, the impoverishment of fishing villages and aging of the population. According to trends in the number of workers in the seafood manufacturing industry, as revealed by the national census, workers decreased by more than 25%, from 221,537 in 2000 to 165,390 in 2015. During this period, the percentage of employees aged 65 years or older has increased from 8.3% to 14.7%.

The Growing Dependence on Foreign Labor

As the labor situation becomes increasingly severe, the fishing industry is relying more and more on foreign labor. In the coastal and offshore fisheries, labor is mainly secured through the foreign technical intern training system, while in the pelagic fisheries it is through the maru ship system1. The fish processing industry relies greatly on the technical intern training system for foreign personnel while also employing foreigners with a "specified skill" residence status and people of Japanese descent.

The number of maru ship crew members is shrinking due to declines in the number of pelagic fishing vessels, falling from 5,255 in 2013 to 4,628 in 2018. The number of technical interns working in offshore fisheries expanded 1.6 times, from 1,000 to 1,600 over the same period. This was driven by the increased numbers of interns being used in the seine and purse seine net fisheries. There were also significant increases in the set net fisheries, from 42 to 138 individuals.

However, the numbers of foreign workers in the fish processing industry far exceed that of cultivation. According to the fisheries census, numbers expanded from 11,629 individuals in 2008 to 13,458 in 2013 and the numbers increased to 17,339 in 2018. The increase in the ratio of foreign to Japanese workers in this period also can't be overlooked. Japanese workers decreased by almost 20%, while the foreign worker ratio went from 5.5% in 2008 to 7.1% in 2013, reaching a double-digit mark of 10.1% in 2018. 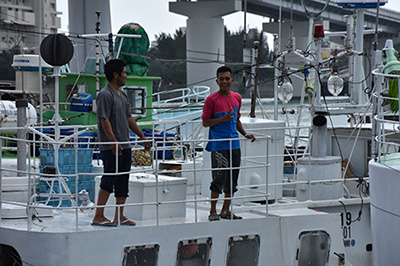 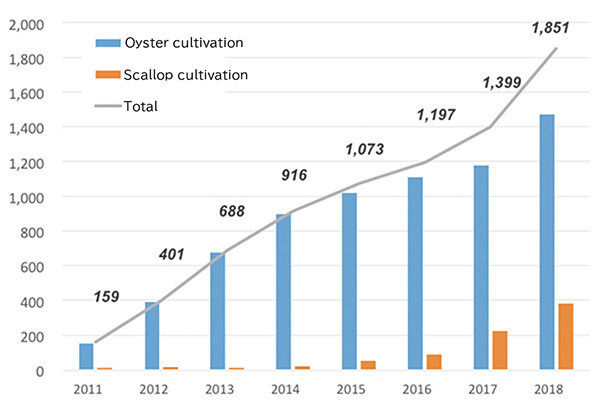 Side effects of dependence on foreign labor

At present, Japan's fishing industry has no choice but to rely on foreign labor to maintain its scale. The industry attempted to find a way to survive by employing more foreign workers, but this was not without its risks. In the case of offshore and pelagic fisheries, which supply large quantities of food, the side effects of dependence on foreign workers became apparent in the form of a shortage of licensed mariners, who act as senior crew members. As of 2017, most fishing vessels’ licensed mariners were aged between 60-64, with 48.8% aged 55 or older. One of the factors behind this issue is that fishing vessels have actively recruited foreign personnel as part of their younger workforce. This change has resulted in reductions in the numbers of young Japanese employees, with fewer individuals building up experience working on ships and obtaining licensed mariner certifications.

However, this is not the only factor. Young Japanese people who have obtained a licensed mariner certification in fisheries high schools have instead begun working on merchant ships, which offer better working conditions and wages than fishing vessels. Regardless, it should be remembered that it is the decreased strength in company management has created a dependence on foreign personnel as well as working environments and wage levels that Japanese people try to avoid.

In the aquaculture and fish processing industries, this heavy reliance on foreign workers in itself has become a risk. Unless they can secure a stable workforce for the long term, it will be difficult for these industries to survive.

COVID-19 has also highlighted the risks of relying excessively on foreign personnel. Entry restrictions were imposed on a wide range of countries from which many technical interns are sourced, including Vietnam and China. Some factories in the fish processing industry were unable to fill vacancies because of this issue, and more than a few were forced to downsize their production lines.

Foreign labor has indeed been a blessing for the weakening fishing industry. However, an over-reliance on this source of labor may result in disaster. To ensure that Japan's fishing industry can reestablish itself as one capable of sustainable development, it will require a reassessment of the risks of relying on foreign labor and a big picture view of the industry's labor force composition (End)