Evolution of Seaweed Farming in Tanzania: Achievements and Challenges Associated with Climate Change

Seaweed started to gain economic importance in Tanzania as early as the 1930s, when the wild species were harvested by the local communities for export to Europe and the USA. By the 1950s, about 4,000 tons of dry seaweed was being exported mainly to France, the USA and Denmark; this trade continued gaining importance, but it collapsed in the 1970s due to depletion of the wild stock. The collapse prompted researchers at the University of Dar es Salaam to start looking into alternative sources, work that started in the late 1970s to 1980s pioneered by Prof Keto Mshigeni. The first experiment started in the mid-1980's, using two varieties of seaweed imported from the Philippines, and by 1989 commercial cultivation of the two species: Kappaphycus alverazii, commercially known as "Cottonii" and Eucheuma denticulutum "Spinosum" had begun. Cottonii is the most preferred because it has more industrial applications compared to Spinosum; consequently, its price is about twice as much. Eight years later, seaweed was being farmed all the along the coast of Tanzania, with a production reaching up to 7,000 tons in 2008. Today (2015) seaweed production has reached 13,000 tons. The farming continued to thrive until the impact of climate variability/change started to severely impact Cottonii, leading to economic instability of seaweed farmers (mainly women). Today, Cottonii hardly survives in shallow water growth conditions. To rescue the situation, Dr. Flower Msuya has been leading research that continues to provide innovative solutions to boost production of Cottonii and value addition to the lower-priced Spinosum.

Economically, seaweed farmers along the Tanzanian coast have benefited right from the start of its commercial farming in 1989. The income has enabled the communities to take care of their basic needs on a day-to-day basis, including food security, education for their children, hospital bills, purchasing household items, rehabilitating their houses or constructing new ones and initiating small businesses, among other benefits. It should be noted that about 70% of seaweed farmers are women; thus, the income has empowered them significantly and enabled them to feel more important, as contributors to the daily needs of their families. In some instances, the women have become almost the sole bread-winners for the family, something which is unusual given the culture and traditions of coastal communities in Tanzania. Consequently, this has succeeded in improving women's status by being more recognized and respected in the society.

Seaweed does not only benefit individuals, but it also contributes to the economy of the country. In Zanzibar, for example, seaweed industry is the 3rd foreign money earner, after tourism and the clove trade, and it forms over 90% of Zanzibar's marine export products. Furthermore, worldwide, Tanzania is the 3rd main producer of spinosum, after the Philippines and Indonesia. It employs about 26,000 farmers, and the production did reach more than 15,000 tons of dry seaweed per year in 2012, before decreasing due to the effect of climate change. The dry seaweed is exported to France, the USA, China, Chile, Spain and Denmark.

When Cottonii and Spinosum were introduced in Tanzania, they had similar growth rates and production volumes, but starting in the early 2000s, Cottonii started being affected by changes in environmental conditions, mostly an increase in surface seawater temperature and epiphytes, leading to ice-ice disease and die-off. Although spinosum continued to thrive, eventual worsening in environmental conditions has led to other factors that affect it too, mostly fouling by micro and other macro-algae, some of them being toxin-producing cyanobacteria. Seaweed die-off impact could be observed in the decrease in seaweed production and number of farmers; change in production species as well as cultivation sites. More recently, however, the fouling has affected farmers themselves, whereby they experience skin itching, and in some cases it is so severe that they have to see a doctor and also rendered unable to work in the farms for months. The impact of climate change continues to weigh heavily on the farmers. Cottonii whose price is double that of spinosum (US$ 0.6 vs 0.3) can no longer be produced and spinosum farming has also been affected in some villages. Many farmers are consistently complaining about the failure to produce enough seaweed due such problems.

In Zanzibar, there is a Seaweed Cluster Initiative, also led by Dr Flower Msuya, which operates in a triple-helix manner. It involves: Academia (University and Research Institutions); the Government and Business (private sector, like seaweed farmers and buyers). Having these players, the Cluster Initiative works with farmers to achieve the desired output from seaweed farming. It is the platform on which farmers communicate their challenges to get appropriate solutions. Further, the Cluster Initiative gives back research findings as direct feedback. Therefore, the farmers report the seaweed problems to the Cluster Initiative, and the scientists produce solutions through research. For Cottonii, the farmers were shown how to farm in deep waters, thereby being able to produce it throughout the year. In the case of Spinosum, the research was based more on how to add value by producing value-added products for selling at higher prices than just dry seaweed.

Farmers were trained to produce seaweed powder that can be used in the production of soap, massage oil and food items (cookies, cakes). Also, farmers were shown how to make food items from fresh (or dry) seaweed such as juices, jam, stew and salad. The Cluster Initiative also helps train farmers in goods packaging, finding markets, and also to attend national and international exhibitions where they sell their products. Over the past ten years, the Cluster Initiative has empowered seaweed farmers to improve their income through these initiatives. A good example is a profitable price of seaweed powder from Spinosum: one kilogram of powder sells at US$ 6, while a kg of dry seaweed is only US$ 0.3. The Cluster Initiative has helped seaweed farmers beyond economic gains, as emphasized by Dr Flower Msuya, founder and facilitator of the Cluster Initiative: "because of the initiative, farmers are now communicating with each other through mobile phones to discuss challenges and day-to-day needs that they can then take to research institutions for answers".

The Cluster Initiative model has many advantages, the most important being to link "science to policy makers/managers". For example, the Cluster Initiative gives a platform on which seaweed farmers, researchers, government officials and seaweed sellers & exporters meet to discuss and give solutions to issues of concern for the industry. The Cluster Initiative in Zanzibar has helped to change existing policies to minimize conflicts between seaweed farmers and other coastal zone users. Also, policies are in place to ensure that the price of seaweed is not lowered to the extent that farmers give up on seaweed farming. Furthermore, farmers are able to approach scientists easily, via the Cluster Initiative, to discuss their problems/challenges for immediate solutions. It is thus suggested that such a Cluster model needs to be adopted within and outside the country, especially in coastal communities, for improved well-being of farmers and for sustainable utilization of coastal and marine resources. 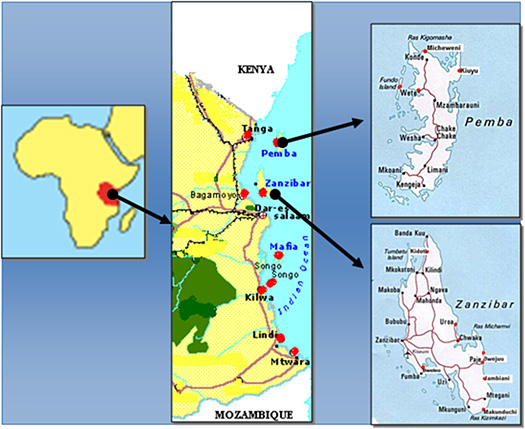 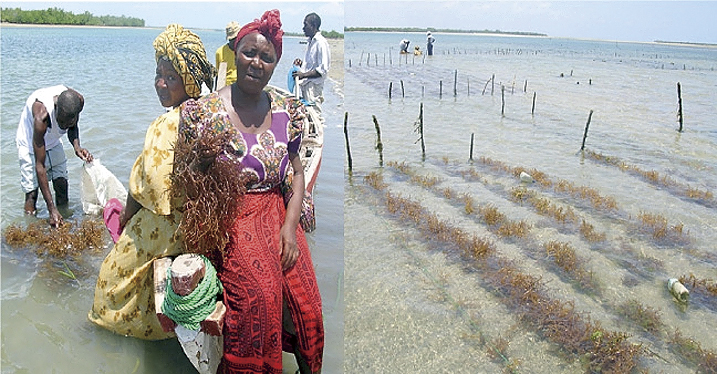 Left panel: Farmers on their way to the farms to plant the seaweed in deep waters.