HOME  >  OceanNewsletter  >  What is the Volume of Japan's 200-nm Exclusive Economic Zone?

What is the Volume of Japan's 200-nm Exclusive Economic Zone?

The ocean, the new frontier, has three dimensions. People tend only to notice its planar extent, but it is time to start paying attention to what lies beneath the surface. That is especially true of the exclusive economic zones defined in the United Nations Convention on the Law of the Sea: these will need to be viewed in spatial terms if they are to be successfully exploited and their ecology protected. The present paper focuses on volume of ocean waters in an attempt to identify the characteristics of waters under Japanese jurisdiction and determine how they compare with those in other parts of the world.

The question of whom the ocean belongs to often arises. Politically speaking, the oceans are parceled out among different countries. The United Nations Convention on the Law of the Sea demarcates, in two dimensions, the waters in which each country can exercise sovereign rights and jurisdiction. In particular, coastal states can declare an exclusive economic zone (EEZ) not to extend more than 200 nautical miles from a defined baseline; here they can claim exclusive rights to exploit fish stocks and other resources.
One often encounters two-dimensional maps showing these 200-mile zones,*1 and the question of which countries rank highest by area thereof is a topic of frequent discussion. Countries around the world typically gather planar information on these zones as part of their basic data. In Japan, the Japan Coast Guard supplies the relevant official figures*.2
But the ocean has three dimensions. The utility and exploitability of an area of water differ depending on its depth, and the 200-mile zones of different countries can each be expected to exhibit their own three-dimensional character (see Fig. 1). The ocean is the new frontier, one about to be actively exploited; but as each country goes about developing its own particular 200-mile zone, a basic requirement will be to form a spatial portrait of it. According to the author's investigations, however, few attempts have been made, whether in Japan or abroad, to calculate the volume of any area of ocean water; with respect to 200-mile zones in particular, there appears to exist no worldwide comparison or analysis at all.
Using a specially developed method, therefore, the author computed the volume of the 200-mile zones of the world's countries, and then attempted a systematic analysis of their spatial characteristics. Although several studies already exist that calculate the volume of a particular country's 200-mile zone or analyze its characteristics in terms of depth, the present study is probably the first in the world to compare the countries of the globe in this regard.

Brief description of the method of calculation used 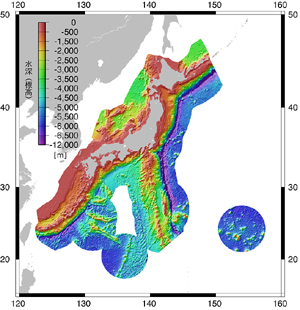 Figure 1. Japan's 200-mile zone and its depth
Data on depth are from ETOPO2.

In calculating the area and volume of a 200-mile zone, several factors interplay: legal conditions, geodetic considerations, the question of the accuracy of the data, and so forth. The truth of the matter is that there are as many potential outcomes as there are combinations of givens. It should therefore be kept in mind that the results presented below were achieved only under a specific set of conditions. The conditions under which the calculations were made were as follows.
? For EEZ boundary data, the Global Maritime Boundaries Database (Aug. 2004) of US company General Dynamics was used; this contains point sequence data on geographical coordinates representing a wide range of boundaries. Data on depth were taken from ETOPO2,?3 a highly advanced two-minute worldwide dataset issued by the National Geophysical Data Center in the United States.
? The geodetic reference system used was WGS84, the Earth being viewed as a rotating ellipse. To obtain area, the surface of the ellipsoid was repeatedly triangulated to the maximum extent possible, and the area of the resulting tiny triangles was then added up. To obtain volume, the cones formed by the tiny triangles and the center of the Earth were used.
? The study covered all member states of the United Nations; for each, a calculation was made for the zone within 200 nautical miles of the baseline as based on its own claims. Claims with respect to overseas territory outside the country's jurisdiction were however ignored.
Because this study concerned itself with the maximum area claimed by each country, waters where several countries' claims overlap were not treated exclusively; rather, waters claimed by (say) two different countries were counted in the totals for both. Thus the figures here presented do not seek absolute consistency in terms of international law.

When area and volume were computed under the stipulated conditions, the top ten ranking countries were found to be those listed in Table 1.
Japan ranks sixth*4 in the world for area, but jumps to fourth in terms of volume. This indicates that Japan possesses an extensive area of extremely deep ocean waters. When volume of ocean waters by depth is compared as in Table 2, Japan ranks first in the world in volume of ocean waters over 5,000 m deep. A calculation was also made of the area and volume of ocean that would be lost should Japan's EEZ around Okinotorishima not be recognized. The results were 0.41 million km2 of area and 2.05 million km3 of volume. In other words, overall area would shrink by 9% and overall volume by 13%; and while Japan's rank by volume would remain unchanged, it would slip to seventh place in terms of area.
Figure 2 presents a breakdown of Japan's 200-mile zone by depth. As this shows, Japan possesses a nice balance of waters of all depths, from the shallow to the very deep; but also distinctive is the fact that over 60% of those waters have a depth of more than 3,000 m. It is particularly noteworthy that waters deeper than 6,000 m make up 6% of the total; in area of these, the calculations reveal, Japan easily ranks number one in the world, with over twice the area possessed by second-ranking Russia.

What do the characteristics of Japan's 200-mile zone tell us?

The results reviewed above reveal much about Japan's topographical characteristics. We will us leave the geological details to the experts; but what implications do these characteristics have for Japan as a maritime nation? First, there is the potential for tapping the ocean for resources. Interest is focusing particularly on seabed mineral resources like manganese nodules, cobalt-rich crust, and submarine hydrothermal deposits, virtually all of which are found at depths of over 1,000 m. Then there is the possibility of exploiting the space available below the ocean surface. For example, deep-ocean storage of the greenhouse gas CO2 is gradually becoming a realistic prospect, but it will only be possible at depths of over 3,500 m. In other words, for Japan the attractions of the ocean lie to a large extent in its deeper waters; it would therefore be wise to put more effort into developing the technologies needed to exploit these. Again, few countries in the world can compare to Japan for the sheer depth range of its 200-mile zone, which feature will, one hopes, be taken advantage of in planning various oceanographic surveys.
Given that Japan possesses such a large volume of ocean water, it will also be important to develop ways to utilize seawater as a resource in its own right. Greater attention should focus on technologies, for example, for harnessing differences in seawater temperature to generate power, using deep sea water as a coolant, desalinating seawater, and extracting metals and minerals from seawater. The United Nations Convention on the Law of the Sea, which defines the scope of a country's EEZ, not only grants coastal states the right to exploit waters under their jurisdiction; it also vests them with the duty to manage them. In light of that fact, perceiving the ocean in spatial terms is surely also indispensable to the task of conserving the ocean that now faces humankind. 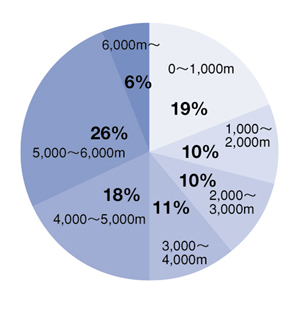 This paper presents some of the results of the author's research at the Ocean Policy Research Foundation (the Ship & Ocean Foundation).