Geology of the Senkaku Islands

Uotsuri Island, Kitakojima Island, and Minamikojima Island are situated on a sedimentary formation largely made up of sandstone and conglomerate. This is known as the Uotsuri Island formation (Matsumoto and Tsuji, 1973) and comprises most of the land of the three islands. Other than this, they consist of intrusive igneous rocks, coral outcroppings, talus deposits, and recent sediments.

Their strata, ages, and distribution are given in the table and maps below. Sandstone and sandstone containing conglomerate are the main constituents of the Uotsuri Island formation, followed by conglomerate. In parts, they are separated by coal seams more than 10 centimeters in depth or, more rarely, by silt beds. Uotsuri Island has strata that are more than 300 meters deep. As yet, no index fossils have been discovered to indicate the geological ages of these strata, and identifying and comparing ages remains a question for the future. However, as the distribution resembles that of the Iriomotejima Island and its surrounding Yaeyama group, it is highly likely that they date from the Miocene era. (Ref. 1)

Furthermore, in May and June 1979, the Japanese government's Okinawa Development Agency conducted drilling surveys at points in the west, northeast, and east of Uotsuri Island, boring holes of 20.00, 18.38, and 20.20 meters in depth respectively, all on flat surfaces near the coast. The researchers analyzed lithofacies and looked at their depth distribution, checked water levels in the boreholes, and made comparisons with the results of geological surveys. They also carried out unconfined compression tests on samples and used the results in discussions over the island's potential to be developed and used. (Ref. 2) 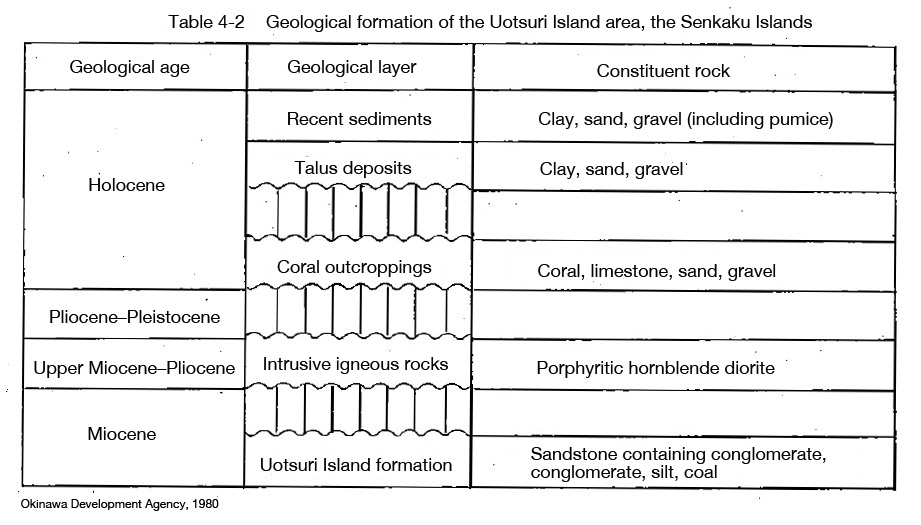 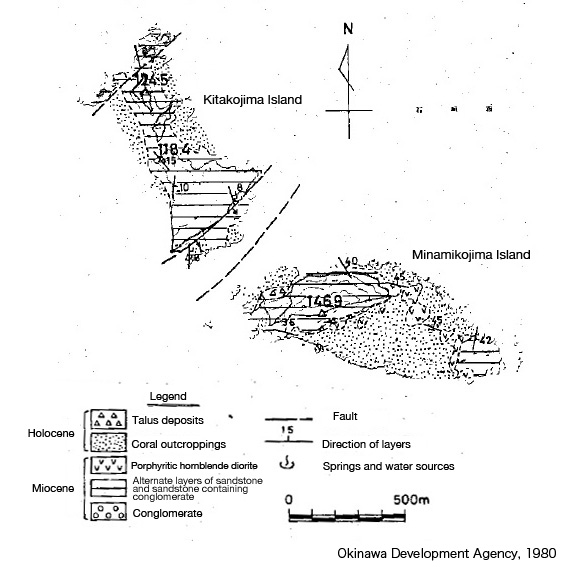 (b) Geology of Kuba Island

Kuba Island is a volcanic island with several craters. It is composed of pyroxene andesite, lava, volcanic bombs, pumice, limestone, and other rocky material. The rock distribution is thought to be from the upper layer downward: pumice and volcanic bombs, lava flows, limestone (Holocene coral outcroppings in some parts), and pyroxene andesite. The lava flows are mainly between 20 and 40 meters above sea level and are relatively concentrated in the north and west of the island, while in the south there is considerable vegetation. There was volcanic activity around the time of the formation of the coral outcroppings and the craters at the top of the island are around 30 meters in diameter and 20 meters deep. The smaller vents on the hillside are around 15 to 20 meters in diameter and 10 meters deep. Pumice and volcanic bombs can be seen around the craters. Due to such evidence as the existence of porphyritic limestone, the preserved state of lava flows, the residual volcanic topography, the scarcity of animal life, and the immaturity of flora, the island is thought to have been largely formed in the Quaternary era with some parts likely to have been formed in the Holocene era. (Ref. 3)

From estimates based on rocks collected from Taisho Island, the island is thought to be made up of andesite, tuff breccia, and tuffaceous sandstone. There is a report that its strata are almost level and that it seems to have a considerable amount of Holocene coral outcroppings around its outside edge. (Ref.3)

Ref.3 ： Nohara Tomohide, "Senkaku Retto no chishitsu (yoho)" (Preliminary Report on Geology of the Senkaku Islands), in Senkaku Retto gakujutsu chosa hokoku (Report on the Senkaku Islands Scientific Expedition), based on a survey carried out by the University of the Ryukyus Scientific Expedition Team (Nishihara, Okinawa: University of the Ryukyus, 1971).