The Senkaku Islands: Location, Area, and Other Geographical Data

The Senkakus consist of conglomerate sandstone (alternate layers of sandstone and conglomerate in some parts), tuff, andesite, andesitic lava, coral outcroppings elevated above sea level during the Holocene era, and other rocky material. The surrounding area is highly volcanic and features faults associated with this volcanic activity, and this affects land formation. (Ref. 2)

Before World War II, as a result of development by private citizens, there were people living in the Senkakus, principally on Uotsuri Island and Kuba Island. However, the islands are now uninhabited. 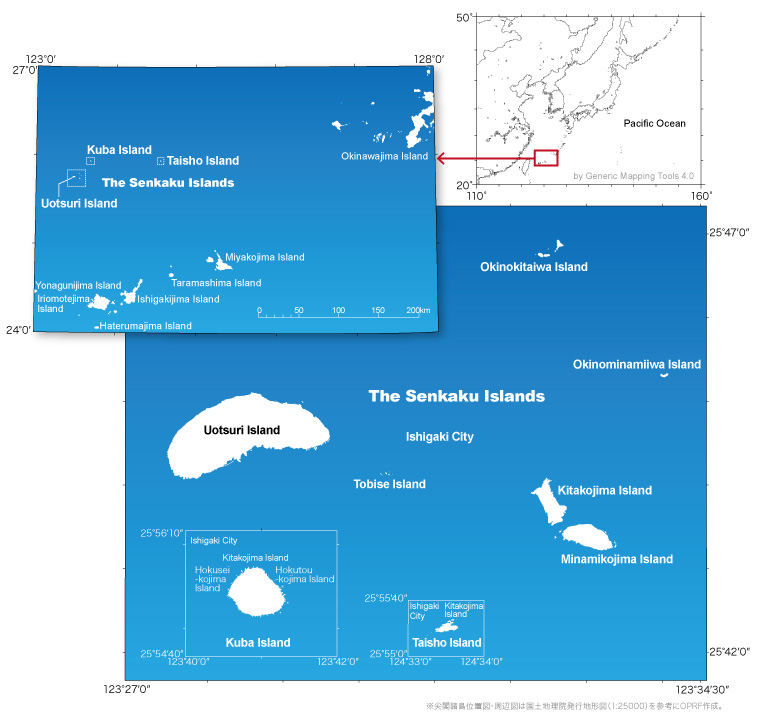 Geographical Data on the Senkaku Islands

Notes:
*1 Calculated by OPRF based on the Digital Japan Basic Map produced by the Geospatial Information Authority of Japan.
*2 Based on data from the island area list published on the website of the Okinawa Prefectural Government Land Policy Division.

Ref.2 ：(Area) Nohara Tomohide, "Senkaku Retto no chishitsu (yoho)" (Preliminary Report on Geology of the Senkaku Islands), in Senkaku Retto gakujutsu chosa hokoku (Report on the Senkaku Islands Scientific Expedition), based on a survey carried out by the University of the Ryukyus Scientific Expedition Team (Nishihara, Okinawa: University of the Ryukyus, 1971).