As the importance of sealanes as main arteries for the global economy continues to increase, marine resources are being actively developed in response to the surge in demand for food and energy supplies. While all countries continue to deepen their involvement with the ocean, the maritime security environment is currently extremely unstable, given the threat of piracy to marine transportation, disputes between states over territorial rights to islands and border demarcations for jurisdictional rights over ocean space, and the effects on ocean areas of historical land-based conflicts, etc. Given these conditions, broad information gathering and appropriate analysis and evaluation are indispensable for the stable use of the ocean and security policy planning. The Ocean Policy Research Foundation, predecessor of the Ocean Policy Research Institute, produced and distributed the OPRF Marint Monthly Report from 2005 and the Arctic Ocean Quarterly Review from 2009; these were also made available on the foundation website. 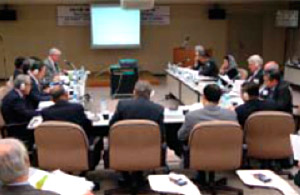 Maintenance of peace and protection of the ocean's environment and resources are major challenges for the 21st century. With this in mind, OPRF reviewed the traditional concept of security centered on the military and began advocating "Securing the Oceans," a comprehensive concept of ocean security that embraces the maintenance of peace on the ocean and the health of the marine environment. In order to promote this new concept, we held international conferences to which we invited prominent experts from Asia-Pacific countries and international organizations in a three-year project starting from 2002. This resulted in making clear the principle, "Securing the Oceans," with active discussions on its implementation and adoption of the "Tokyo Declaration."

In order to realize the concept of Securing the Oceans, the declaration recommends concrete measures based on 10 provisions, including information sharing and a legal enforcement system, and expresses an agreement for establishing a Securing the Oceans Advocacy Group (SOAG) to put it into practice. As this information was disseminated at home and abroad, it received considerable international attention.

Left: A Marine Drill toward Anti-piracy and Anti-terrorism Measures
Right: A Proposal Based on the Results of the U.S.-Japan Seapower Dialogue

The sea-lanes from the Middle East to Japan are its 'energy road' and thus a matter of life and death for Japan. However, these ocean areas are extremely vulnerable from a security standpoint, as, in addition to the problems concerning territorial rights of certain islands in the South and East China Seas and the long-standing regional conflicts between India and Pakistan and in the Middle East, there are the new threats of piracy and terror at sea, and the emergence of disputes between states over fishing and seabed resources. In order to secure safety of navigation in these waters, dialogue with coastal states on maritime security is thus important.As OPRF believes that dialogues carried out in a flexible manner on a Track 2 basis might play a large role in promoting maritime security, to date we have carried out maritime security dialogues with India, Indonesia, China, and Turkey, issuing and widely disseminating joint statements based on our discussions.

As for Japan-U.S. relations, we invited experts from both countries to discuss the meaning of their seapower alliance, resulting in the "Proposal Based on the Results of the U.S.-Japan Seapower Dialogue: United States- Japan Alliance for Stability and Prosperity on the Oceans," which we released in April 2009.We plan to continue these Track 2 dialogues in the hope that they might lead to full intergovernmental talks on maritime security in the future.

Anti-piracy Initiatives for the Seas off Somalia 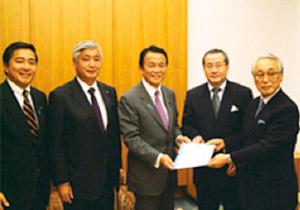 "Policy Proposal Regarding Japan's Response to Emerging Piracy off the Coast of Somalia," Presented to Prime Minister Taro Aso

OPRF has heretofore devoted much effort to maritime security studies, including surveys on piracy. In 2008, for example, with the sudden rise in piracy off the Somalia coast, we made a policy proposal to the Japanese government and strengthened our public awareness activities.

On November 14, 2008 we held the "Emergency Conference on Measures to Thwart Somali Offshore Pirates." We then summarized these discussions in our "Policy Proposal Regarding Japan's Response to Emerging Piracy off the Coast of Somalia," which we presented to Prime Minister Taro Aso, who was concurrently serving as Director-General of the Headquarters for Ocean Policy, on November 18. Furthermore, on March 24, 2009, we held the "Emergency Conference on Somali Offshore Piracy" to increase a shared awareness of the current situation and discuss possible solutions. Reflecting the rapidly developing consensus for an anti-piracy policy, the Law on Punishment of and Measures against Acts of Piracy was submitted to the Diet in March of the same year, adopted in June, and took effect from the following month.

OPRF is continuing its research in these areas, in the hopes of promoting further gains in maritime security, including safety of navigation.