Recently, shrinking sea ice in the Arctic Ocean due to global warming and other environmental issues has garnered the attention of both Japan and the international community. Of particular interest is the prospect of linking Europe and Asia through the commercial development of the Northern Sea Route, which is approximately 40% shorter than southern routes passing through the Suez Canal and Straits of Malacca. In addition, countries are taking steps to develop the Arctic's yet-untapped natural resources, including abundant reserves of oil, natural gas, and mineral deposits. Going forward, Japan expects the Arctic Ocean to play an increasingly pivotal role in its economic growth.

What must not be forgotten, however, is that even as the sea ice retreats, economic activity in the Arctic will need to address issues such as the region's unique and fragile environment, harsh natural conditions, and low level of infrastructure. To ensure sufficient environmental protection measures, countries must establish a system of cooperation combining correct information with expertise and technical skill.

The Ocean Policy Research Institute (OPRI) from early on recognized the importance of the Arctic Ocean and for over twenty years has realized a variety of projects centered on the region.

From 1993 to 1999 the former Ship and Ocean Foundation (SOF) with support from the Nippon Foundation and in cooperation with research institutions in Russia and Norway undertook the International Northern Sea Route Programme (INSROP) toward establishing a sea route in the Arctic Ocean, which has remained closed since the dawn of human history. Carrying out a variety of research and experimental voyages the INSROP showed it was technically possible to traverse the Arctic Ocean year round. The Japan Northern Sea Route Programme (JANSROP), which was initiated by SOF alongside INSROP, from 2002 to 2006 embarked on a new phase titled "Development and Operation Programme for Environmental Sustainability in East Eurasia" (JANSROP-II). The initiative compiled data on the rich energy, mineral, forest, and fishery resources along with topographical data from Far Eastern Russia into the world's first geographic information system (JANSROP-GIS) and proposed a marine operation regime with an emphasis on conservation of the marine environment in the Sea of Okhotsk. The international community has praised the findings of INSROP and JANSROP-GIS, which have been included in official publications, such as the Arctic Marine Shipping Assessment 2009 Report (AMSA) released in April 2009 by the Arctic Council, a high-level government consultative of eight Arctic states.

When INSROP and JANSROP were first initiated, the thickness of Arctic Sea ice made commercial-use of sea lanes unlikely until after 2050. Over the decades, however, the extent of sea ice has decreased faster than expected, drawing attention of not just Arctic states, but countries around the globe. Despite this, Japanese awareness of the importance of the Arctic and surrounding waters remained low, and as a result of there being almost no government-level research programs in the region it lacked information vital for making policies. In view of this situation, the former Ocean Policy Research Foundation (OPRF) initiated the Arctic Conference Japan in 2010 with experts in such fields as international law, security, scientific research, shipbuilding, marine transport, and climatology. Over two years, conference members met to establish a unified view of multifaceted Arctic issues, including the current state of the region, trends, and challenges, publishing them in a report along with eight recommendations for Japan's Arctic Policy. OPRI has used these as a base for a wide variety of projects, both past and current. The eight recommendations are:

Emissions of black carbon from shipping are said to affect climate change through building up on polar ice and accelerating melting by changing the reflective properties of the ice. The rapid, localized impact of global warming on fragile ecosystems is considerable and future development of the Arctic region, such as commercial shipping lanes, have the potential to exacerbate the problem. Along with conducting a survey on the level of Arctic black carbon from shipping, OPRF also carried out simulations to assess effects of soot and considered regulatory measures.

While shipping and natural resource development is on the rise, Arctic navigational charts and support facilities remain inadequate, a condition many experts argue could potentially result in a serious environmental calamity if ships were to collide or run aground in the area. As reports by the Intergovernmental Panel on Climate Change (IPCC) and Arctic Council have shown, environmental change in the Arctic will not be limited to Polar Regions, but will likely severely impact the entire global climate. In view of this, the project assessed the effects on the Arctic environment from shipping, shedding light on existing conditions and issues by conducting an environmental survey and proposing risks measure in the Arctic Sea as well as gauging and analyzing recent legal measures and other trends.

OPRF studied commissioning a multipurpose research icebreaker capable of year-round Arctic voyages to help Japan contribute to solving the issue of global climate change as well as bolster relations with Arctic states through regional development efforts. Such a vessel would be an extremely effective platform for international joint research and would enable Japan to play a major role in the scientific and technological fields globally. The project considered ways to utilize Japanese engineering and experience as well as necessary aspects in building and operating an Arctic research vessel capable of supporting international research.

Amid rapid advancement toward commercial development of the Northern Sea Route, OPRI is working to enable Japan to fully capitalize on the benefits of the shipping lane by establishing a national utilization strategy as well as drawing up specific policies and a roadmap aimed at further facilitating commercial use.

While many Japanese companies understand the benefits of the sea route, they remain tentative about utilizing it. To address these concerns, OPRI is inviting key persons in Arctic states such as Russia, Norway, and the United States to take part in international seminars considering the advantages of commercial development of the North Sea Route that also serve as open venues to share recent information and broaden networks toward establishing stable and sustainable use. 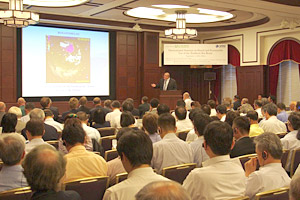 Report: International Seminar on Sound and Sustainable Use of the Northern Sea Route
Date: September 3 and 6, 2013 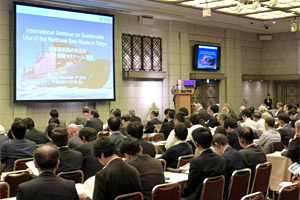 Report: International Seminar on Sustainable Use of the Northern Sea Route
Date: November 7-10, 2014 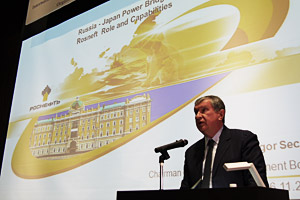 Arctic governance is poised to become an increasingly important issue even for states outside the region, including Japan and other Asian nations. Amid this development, Japan in 2013 joined the Arctic Council as an observer. In pursuing track 1.5 diplomacy, OPRI co-hosted a workshop bringing together government experts in Arctic policy from Arctic Council nations and observer nations in Asia as well as other participants to build mutual understanding in establishing a proper structure for Arctic governance while also shining a light on specific requirements Japan must consider in forging an Arctic policy. 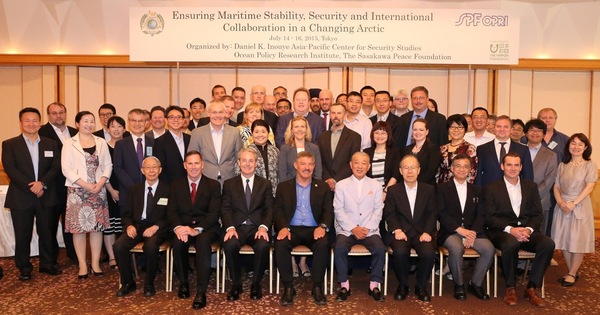 When considering the sustainable use of the Arctic region, it is important to respect the viewpoints of the Arctic states, while conducting discussions with various relevant stakeholders. OPRI, in coordination with The Nippon Foundation and the National Graduate Institue for Policy Studies (GRIPS), launched the "Study Group for the Future of the Arctic" in 2016, in order to conduct discussions on the cross-sectoral "Arctic Issue." In this study group, approximately 80 members from a variety of sectors come together for discussions by industry leaders and distinguished Arctic researchers, with observers including representatives from relevant national government ministries and agencies, local governments as well as Members of Parliament.

In FY2017, coinciding with the scheduled revision of the Basic Plan on Ocean Policy, the study group conducted discussions on how to include the Arctic Issue in policy negotiations, placing policy issues on the Arctic as a part of ocean policy, and considering the need for a more specific and executable policy, the group submitted a policy recommendation based on the five pillars listed below.

Please see below for the English version of the policy recommendation. 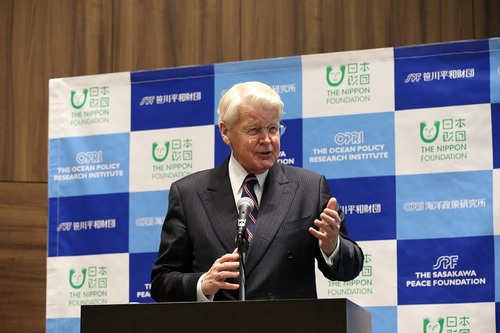 For more information, please click on the following link.「From the Oceans」