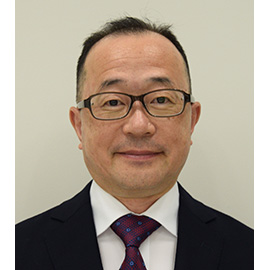 He graduated from the National Defense Academy of Japan in 1988, and the High Level Mine Warfare School and the Naval War College. Additionally, he received a Master’s Degree of Arts (Social Management Science) at the Open University of Japan in 2021. After qualifying as a surface warfare officer, he carried out duties on JS Shimayuki (DD133), as navigation officer on JS Asagiri (DD151), and as damage control officer on JS Sawagiri (DD157), all in Sasebo. Over the course of five overseas deployments, he commanded the minesweeper ship JS Hikoshima (MSC 669), Minesweeper Division 46 (MSCx3), and Minesweeper Division 51 (MSOx3), and also commanded the Deploy Task Force as chief-of-staff for Commander, Mine Warfare and Amphibious Warfare Force. He completed five tours in the Maritime Staff Office, Chief of Training Section, where he was responsible for defense planning, public affairs, personnel planning, manager of honors and discipline, and commanded the Mine Warfare Support Center (CMWSC). He assumed the post of chairman and professor of the Department of National Defense Studies at the National Defense Academy of Japan in September 2018, and retired from the JMSDF in December 2020 (Rear Admiral JMSDF (Ret.)).

He assumed the position of Senior Research Fellow in the Sasakawa Peace Foundation in October 2021.