1. Two nuclear concerns brought to light by the invasion of Ukraine

Russia’s invasion of Ukraine has once again put the issue of nuclear weapons before the world. On February 27, 2022, Russian President Vladimir Putin ordered that the units operating Russian nuclear forces be placed on “high alert.” While Ukraine has fiercely resisted the attack and the Russian offense is advancing behind schedule, the move is thought to indicate to Kyiv and the Western countries supporting it that Moscow would not hesitate to use nuclear weapons[1]. In Japan, the only country to have suffered an atomic attack, there is widespread opposition to Russia’s actions, which could be seen as a nuclear threat, and the mayors of Hiroshima and Nagasaki sent a letter of protest to Putin, urging him not to create a third such city[2].

However, a more pressing issue is the safety of nuclear power plants.

There is no precedent for protecting nuclear power plants amid large-scale combat, and such a scenario is not envisioned in conventional concepts of nuclear security and other forms of protecting nuclear facilities. In 1981, Israel bombed and destroyed a nuclear research reactor on the grounds that it could lead to the development of nuclear weapons[5], but a commercial nuclear plant, with a generating capacity greater than that of a research reactor by orders of magnitude, has never been exposed to war or urban warfare. In addition, in 2010, at the invitation of then U.S. President Barack Obama, the Nuclear Security Summit was established with the participation of other national leaders, calling for international cooperation in strengthening the protection of nuclear-related facilities. However, nuclear security is designed primarily for attacks by non-state actors, such as physical attacks on facilities by terrorists and cyberattacks, and it does not address the protection of facilities during interstate warfare. At major accident at a nuclear power plant during wartime could become an unprecedented catastrophe.

In considering nuclear protection in wartime, this paper first analyzes the background of Ukraine's increasing dependence on nuclear power. It will examine how international treaties provide for the protection of nuclear facilities in wartime, and finally, explore what lessons the world and Japan should learn from these events for the peaceful use of nuclear energy. 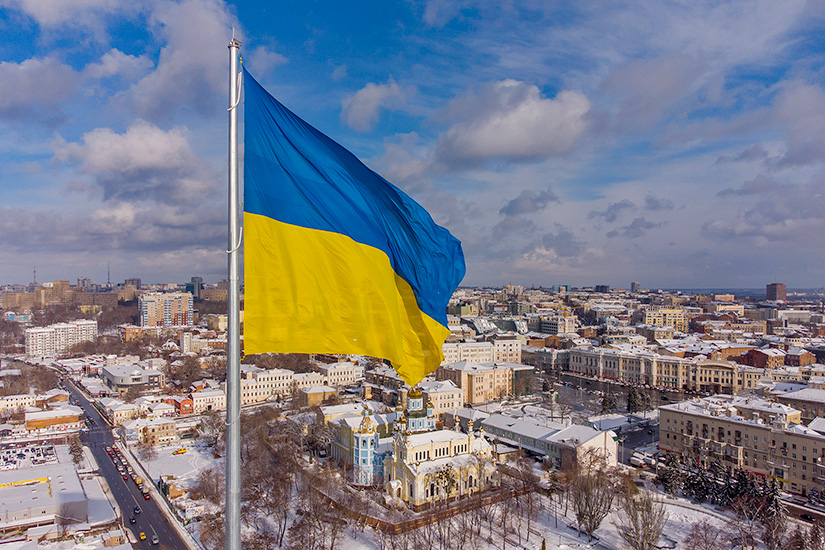 Ukraine is not rich in primary resources and has been dependent on imports of oil and natural gas from Russia through pipelines built during the Soviet era. However, since the 2000s, the two countries have been at odds over supply and transportation conditions for natural gas, leading to a reduction in supply[6]. Relations between the two countries deteriorated further after Russia annexed the Crimean Peninsula in 2014. Russia has maintained an embargo on steel pipes for transporting natural gas, oil and petroleum products to Ukraine since April 2019. It also made exports of gasoline and diesel fuel subject to a permit system[7].

Under these circumstances, Ukraine, still keenly aware of the 1986 Chernobyl disaster that spread radioactive materials across much of Europe, has been forced to rely on nuclear power generation. As shown in Chart 1, nuclear power accounts for 54% of Ukraine’s domestic energy supply, the second largest share after France.

However, the country’s nuclear power plants, its main source of power, have noted durability and safety issues[8]. As shown in Figure 2, the nuclear power plants in operation are primarily Russian pressurized water reactors (VVERs), which were developed in the former Soviet Union. In contrast to the nuclear power plants in Western countries and Japan, which are designed to protect their reactors from the intentional impact of aircraft by using steel containment vessels, some VVER share the Chernobyl plant’s lack of a containment vessel, even though it is not exactly the same type of reactor.

Ukraine’s worsening relationship with Russia has forced it to continue operating its Soviet-era nuclear plants to ensure a stable supply of electricity for social and economic life to continue, even while the country is aware of the plants’ safety issues[9].

3. Nuclear plants during wartime as seen from international treaties

Soon after the February 24 invasion, it was reported that Russia had seized the Chernobyl nuclear plant. On February 28, reports came that Russia had captured the 6-reactor Zaporizhzhia nuclear plant (see Figure 1), which is located roughly halfway between the Crimean Peninsula and the regions of Donetsk and Lugansk, areas that are effectively controlled by Russia or pro-Russian forces. Although Ukraine denied that Russia had taken Zaporizhzhia[10], Russia reportedly attacked the plant on March 4, causing a fire[11], and the security and protection of nuclear plants in Ukraine remains unpredictable. International Atomic Energy Agency (IAEA) Director General Mariano Grossi said immediately after Chernobyl was taken that “any armed attack on and threat against nuclear facilities devoted to peaceful purposes constitutes a violation of the principles of the United Nations Charter, international law and the Statute of the Agency[12].”

Although the IAEA Statute does not explicitly prohibit attacks or threats against nuclear plants used for peaceful purposes, the fourth Geneva Convention and its additional protocols define the scope of protection for prisoners of war and civilians not participating in combat. This includes nuclear plants as shown on Figure 3.

Source: Compiled based on “Main Contents of the Geneva Convention and Additional Protocols,” Ministry of Foreign Affairs.https://www.mofa.go.jp/mofaj/gaiko/k_jindo/naiyo.html (Japanese)

However, there is no guarantee that nuclear plants will be spared from large-scale attacks. There have already been incidents apparently in violation of the Geneva Convention, including a Russian attack on a housing complex with no military facilities. Considering the fragility and current status of nuclear plants in Ukraine, there is reason to fear that a severe accident with a large release of radioactive materials could occur due to two main causes.

The first is damage to a reactor caused by either an intentional or unintentional attack. The reactors in Ukraine do not have containment vessels, meaning that it would be impossible to contain the radioactive materials if one were to fail. Radioactive materials would be released in an uncontrolled manner as in the Chernobyl disaster. A similar situation could also be triggered by an attack on a facility that stores spent fuel.

The second is a situation in which the personnel at the plant are forced to abandon operation and control of the reactor for their own safety. Nuclear plants are not safe once the control rods are inserted into the reactor and the fission reaction is terminated. The nuclear fuel continues to generate heat even after the reaction ends, so the reactor must be continuously cooled. If the reactor cannot be cooled, the fuel will melt due to its own heat, and the reactor will become hot and pressurized. This could result in reactor failure and leakage of radioactive materials.

The latter of these two was the most feared outcome at the accident at the Fukushima Daiichi nuclear plant in 2011, and the cabinet at the time was secretly preparing for a “worst-case scenario.” This scenario stated that if the plant personnel were evacuated and control of the reactors abandoned, “there may be areas beyond the 170-km radius [from Fukushima Daiichi] that should be subject to mandatory relocation, and there may be areas within a 250-km radius where radiation dosage will significantly exceed natural levels and relocation requests should be granted.” For reference, central Tokyo is just about 250 km from the Fukushima Daiichi plant. In other words, this scenario assumed eastern Japan to be almost entirely uninhabitable[13].

4. Reexamining the protection of nuclear facilities

This is the first time since the peaceful use of nuclear energy began after World War II that the world has had to consider the protection of nuclear facilities during wartime. At this stage, it is only possible to appeal to the belligerents, especially Russia, to comply with the Geneva Convention and exercise restraint in attacking nuclear plants. Moreover, it is largely impossible to require nuclear plants to have a level of durability that could withstand an armed attack. That means the only way to prevent these facilities from being exposed to combat is for the international community to promote initiatives that do not allow for invasions of other countries or changes of the status quo by force.

Many countries are taking steps to strengthen the protection of their nuclear plants and related facilities. As in the Fukushima Daiichi accident, a meltdown of nuclear fuel due to a loss of power, and the resulting hydrogen explosion and leakage of radioactive materials, could be caused by physical attacks, such as a terrorist act. In Japan, protective systems have been strengthened, such as requiring each nuclear plant to have a designated critical incident response facility that can remotely operate the reactor, even if the central control room is taken over by terrorists.

However, since 2010, a growing number of countries in the Middle East, where political conditions are often unstable, have begun to introduce nuclear power to their energy supplies. There is no question that international work led by the IAEA, rather than efforts by Japan alone, is needed to further strengthen the protection of nuclear plants and other nuclear facilities. The recent events in Ukraine should be used as an opportunity for all countries to reexamine the protection of nuclear facilities, including power plants, and to continue working to minimize their vulnerabilities.