In the end of October 2012, the Information Sharing Center (ISC) of the Regional Cooperation Agreement on Combating Piracy and Armed Robbery against Ships in Asia (ReCAAP), which was established on the basis of ReCAAP, issued the report on the incidents of piracy and armed robberies against ships in Asia up to the third period of 2012 (hereinafter, the Report).. (ReCAAP is an abbreviation of the Regional Cooperation Agreement against Piracy.)

While reports of the International Maritime Bureau (IMB) cover the entire world, ReCAAP’s reports cover the regional areas stretching from the Arabian Sea to northeast Asia via southern rim of the Eurasian continent. In addition, while the IMB gets intelligences from non-government vessels and shipping owners, those of ReCAAP come from information sharing with Focal Point in Hong Kong, Singapore-based Information Sharing Center (ISC) and Information Sharing Web, which is composed of mutual connections with Focal Point. While the Focal Points of the respective nations are set at their coast guards, maritime police, ministries in charge of marine transportations, maritime affairs, and/or navy (in the case of Japan, the focal point is set at Japan Coast Guard), those are coordinating with the law enforcement agencies, navy, port authorities, custom authorities and shipping circle and using data from the International Maritime Organization (IMO), IMB and others.

At present, the ReCAAP consists of the 14 regional nations of India, Sri Lanka, Bangladesh, Myanmar, Thailand, Singapore, Cambodia, Laos, Vietnam, Brunei, Philippines, China, Republic of Korea, Japan and the four non-regional nations of Norway (joining in August 2009), Denmark (joining in July 2010), the Netherlands (joining in November 2010), and the United Kingdom (joining in May 2012). Although Malaysia and Indonesia are non-members, they are conducting information exchanges with the ISC.

The following are the patterns and trends of the incidents of piracy and armed robbery against the ships noted from the ReCAAP report of the Asian region up to the third quarter of 2012.

1. Definition of Piracy and Armed Robbery

Regarding the definition of Piracy and Armed Robbery against Ships, the ISC in ReCAAP accepts the “definition of piracy” in Article 101 of the United Nations Convention on the Law of the Sea (UNCLOS). As for the armed robbery against the vessels, the ISC accepts the definition of the “Code of practice for the Investigation of the Crimes of Piracy and Armed Robbery against Ships” which was adopted by the International Maritime Organization (IMO) in its Assembly Session in November 2001. Those are stipulated in the Article 1 of the ReCAAP Agreement respectively.

2. Numbers and locations of actual and attempted attacks

Table 1: Total number of incidents by location up to the third quarter of each of past five years 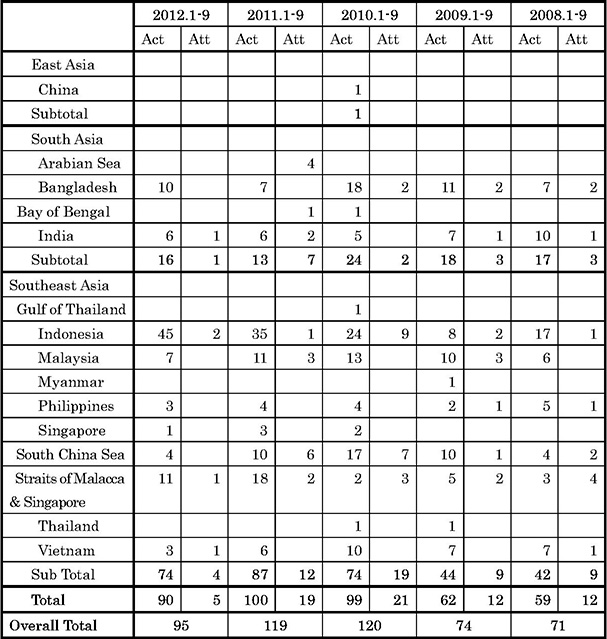 According to the Table 1, while the number of incidents recorded 78 in the Southeast region, which is the lowest for the past 3 years, incidents were dramatically increased in Indonesia, which show its maximum for the past 5 years. Therefore, incidents were also increased in Bangladesh and the report notes that enhanced vigilance and increase in surveillance are encouraged at the ports and anchorages in Bangladesh.

3. Evaluation on significance of incidents

The most distinctive characteristic of the ReCAAP report is that the ISC evaluates significance of each incident in terms of two factors − violence factor and economic factor, and categorize.

In evaluation of the violence factor, the report uses the following criterion, (1) types of weapons used (violence is the most forceful when more highly efficient weapons than knives and others implement are used; (2) treatment of crews (violence is the most intensive if the crew are killed of kidnapped); and (3) numbers of the pirates /robbers who engaged in attacks (in this case, the more the numbers are, the greater the violence develops, and the organized crime will possibly increase.) Assessing the economic factors, the report uses a criterion of evaluating financial values of damaged vessels. In this case, the seriousness is the greatest when ships were hijacked with the cargoes.

For the above reasons, this report classifies all incidents into the following 4 categories.

Table 2: Number of actual incidents by Categories up to the third quarter of each of past five years

As the Table 2 categorizes the actual incidents up to each third quarter for the past 5 years, all incidents categorized into CAT-1 are cases which vessels were underway. The number of 2012 recorded 2, which is its minimum for the past 5 years, and those were hijacking incidents involved tug boats and barges which occurred approximately 35nm off Tanjung Dato, Sarawak, Malaysia (South China Sea) on April 17 and between Kadut and Pulau, Banggi, Sabah, Malaysia on July 27. According to the report, pirates put crews onto lifeboats and took down to the sea. After that, the lifeboats under drift were rescued by vessels which were navigating.

According to the report, of the 74 actual attacks, incidents which vessels were underway recorded 20 and those of which vessels were at anchor were 54. Of the 20 incidents, 2 belongs to CAT-1, 13 belong to CAT-2 and 5 belong to CAT-3 or Petty Theft, while, of the 54 incidents, 16 belong to CAT-2, 38 belong to CAT-3 or Petty Theft. Of the 16 incidents, 7 occurred in Balikpapan, Belawan, Dumai, Batam and Samarinda in Indonesia and the following are that 2 occurred in Chittagong in Bangladesh, 2 in Kakinada and Mumbai in India, 2 in Tanjung Piai in Malaysia, 2 in Haiphong and Kalirin in Vietnam and 2 at the port and anchorage of Manila in the Philippines. In these cases, Robbers who were constituted of 4-9 members and armed with knives, machetes or guns usually steal fixtures, cargos, engine parts, cashes and crew’s belongings.