More than 10,000 islands dot the vast Pacific. Separated by ocean expanses and mountain barriers, the communities of each island region have down through the ages preserved their traditional cultures.

The image that many people embrace of the Pacific Islands is one of an earthly paradise, where time is spent basking leisurely under coconut palms on a sandy white beach looking out over coral reefs awash in an emerald green sea. Though it is easy for the efficiency-driven people of the industrially advanced nations to envision island life in such idyllic terms; for the native peoples, all is not that simple. The tropical breezes enjoyed so much by tourists can turn into devastating typhoons, and the lapping tides into raging waves.

No longer able to insulate themselves from the outside world, many island communities are attempting to modernize, but at the risk of exposing their traditional social systems and natural environment to harmful influences. At the same time, the remoteness of the island regions makes it difficult for their constituent countries to participate fully in the wider international society. Likewise, the geographic and economic limitations of these island states pose formidable obstacles to their development.

Though many island nations have attained independence from their former Colonial Powers, most, still highly dependent on foreign aid, are seeking ways to achieve true autonomy. Both Japanese aid and investment in the Pacific islands region have been increasing over recent years. Unfortunately, though, many of these programs have been implemented without sufficient understanding of the region's traditions and social systems. Neither have adequate channels been established for exchanging information between Japan and the countries of the region.

Against this tapestry and in recognition of the fact the countries of Oceania, like those of Asia, are Japan's neighbors and share profound historical and cultural ties with her, the Sasakawa Peace Foundation hosted the Pacific Island Nations Conference in 1988. This conference, subtitled "Friends Across Oceans, Peace Across Borders," gathered together in Tokyo top-ranking officials from the Pacific island nations, neighboring countries, regional and international agencies, and various Japanese sectors. In response to a request expressed by the participants, the decision was made to establish a Pacific Island Nations Fund within the Sasakawa Peace Foundation to conduct specific regional projects.

Friendship across Oceans,Peace across Borders

A little over two years have passed since the Sasakawa Peace Foundation was established in September of 1986. Amassing its own experience, and utilizing extensive funding from Japan's boat racing industry and receiving assistance from other concerned organizations, in this short time the Sasakawa Peace Foundation has become Japan's foremost private foundation promoting international understanding and exchange. Private philanthropic organizations both inside and outside Japan have come to hold high expectation for the activities of the Foundation.

Near the end of its second year of operation, the Foundation sponsored the Pacific Island Nations Conference, which was held in Tokyo on the 26th and 27th of August, 1988. The purpose for convening this Conference was to explore concrete approaches through which Japan can further assist in the development efforts of the Island Nations while, at the same time, creating even stronger bonds with and between these countries dotting the South Pacific. Ultimately what was sought were ways in which the participating nations, including Japan, can benefit each other. Attending the Conference as Participating Members were top ranking officials from the governments of the Republic of Fiji, the Republic of Kiribati, the Federated States of Micronesia, Papua New Guinea, the Solomon Islands, the Kingdom of Tonga, Tuvalu, the Republic of Vanuatu, Western Samoa, and Cook Islands. Attending as Associate Members were representatives from the countries of Australia, New Zealand, and the Republic of Indonesia and from four international agencies; namely, the South Pacific Commission, the South Pacific Bureau for Economic Cooperation, the Pacific Islands Development Programme, and the Committee for Coordination of Joint Prospecting for Mineral Resources in South Pacific Offshore Areas. Chairing the Conference was Tadashi Kuranari, former Minister of Foreign Affairs.

The Conference is believed to have made meaningful contribution to the dialogue between the participating nations and to have borne many fruits. The proceedings were recorded and compiled into this publication to make them available for the perusal of all concerned. In the Final Session of the Conference, Ryoichi Sasakawa, Honorary Chairman of the Sasakawa Peace Foundation, announced his plan to establish a Pacific Island Nations Foundation. Later, when the plan was materialized, it was decided, instead, to establish a Sasakawa Island Nations Trust Fund (with a total endowment of three billion yen) within the Sasakawa Peace Foundation. The Foundation is scheduled to begin administering the Fund from April of 1989. In the years to come, the Sasakawa Peace Foundation will continue to develop its own unique programs, distinct from those of the government and corporate sectors. All the staff of the Foundation are dedicated to this end, and they ask for your guidance and encouragement in helping them accomplish it.

SESSION I: Addresses Of the Participating Members

SESSION II: Speeches by the Members on the Topic,"Social and Economic Development of the Participating Countries: Present State and Future Outlook"

Long-and Medium-Term Planning Being Carried Out, but Immediate Development Assistance is Critical
Hon. Tuilaepa Sailele
Developing Specialized Products of High Value for Export Through the Resourcefulness of Our People
Hon. Pupuke Robati

SESSION III: Free Discussion on the Topic, "Relationships between the Pacific Island Countries and Japan, and Their Requests for Future Cooperation from Japan"

With interest in maritime security and marine resources mounting around the globe, people are looking to the waters around the Pacific Islands not only as a possible area for marine development leading to resource discovery, but as a region critical to maintaining safety in the Pacific Ocean.

In coming years, the islands will have a major role to play in keeping the Pacific Ocean a peaceful and open zone. At the same time, Japan, the US, Australia and other countries linked together by the Pacific Ocean may be called upon to collaborate with the Pacific Islands to ensure security in the islands’ Exclusive Economic Zone, as well as effective use of this zone.

Since its establishment in 1989, the Sasakawa Pacific Island Nations Fund has viewed the Pacific Island nations as important partners of Japan, and has thus conducted with the islands a wide variety of exchange and human resource development programs. The guidelines drawn up for the second period of the Fund’s operation were designed to promote smooth and balanced development in Micronesia, a region not only close to Japan in geographical terms but also with a long history of interaction with Japan.

The guidelines for the third period come into effect in 2009, and focus principally on programs to promote maritime security and management in the seas around the Republic of Marshall Islands, Federated Sates of Micronesia and Republic of Palau. Besides, the Fund will strive to provide resource management training for sustainable development and capacity building programs that contribute to the islands’ efforts to develop and become self-supporting. When the Fund has carried out its intended programs throughout Micronesia, it will aim to expand its scope to cover Melanesia and Polynesia. By conducting activities in these nations in the below-mentioned program areas, the Fund will attempt to contribute to the overall stability of the Pacific Ocean and prosperity of the island nations.

Cooperation for peace and solidarity between maritime states

Maritime management in the Micronesian region

The Fund will make use of its status as a private non-profit foundation to promote communication and collaboration between the public and private sector, and between various countries, with a view to promoting collaborative maritime management in the Republic of Marshall Islands, the Federated States of Micronesia, and the Republic of Palau. The support provided by the Fund for improvement of maritime security function in the three island nations will be focused on conducting surveys and making recommendations on the basis of agreements with the countries concerned, and human resource training for maritime security.

Communication and exchange for maritime safety

The Fund supports communication and exchange between the Pacific Islands in the fields of maritime security and management. In these fields, specific aims are to pool knowledge and experience among the Pacific Island nations in order to improve education and training in marine transportation, maritime security, environmental conservation and sustainable fishing, and to create a system of inter-island collaboration.

The Fund supports programs to raise the standard of and increase access to distance education in the Pacific region, thereby building the capacity of the island citizens. The Fund also either conducts or supports programs in which particularly talented individuals are offered the opportunity to receive education and training in Japan or other country outside the Pacific region.

In the sparsely populated and isolated islands that comprise the Pacific Island nations, there is a pressing need to lay down the foundations of a healthcare system. The Fund supports education and training for specialists in healthcare, and aids programs for ideal systems of medical treatment and preventative medicine suited to the particular needs of each Pacific Island.

The Fund supports programs that promote information sharing and exchange between the Pacific Island nations, as well as programs to deepen mutual understanding between the islands and Japan. 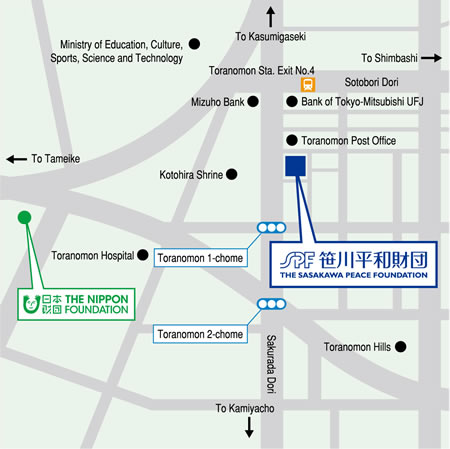 See the map in googlemap