Why Is Economic Interdependence Unable to Halt the US-China conflict?

There seems to be no end in sight to the conflict between the United States and China. On August 1, President Trump announced a fourth round of tariffs on Chinese products, which he had previously pledged to postpone at the G20 summit in Osaka in late June, to be levied starting September 1. In retaliation, China’s Ministry of Commerce announced on August 6 that it would suspend purchases of agricultural products from the United States.

Table 1. Mutual tariffs imposed by the United States and China 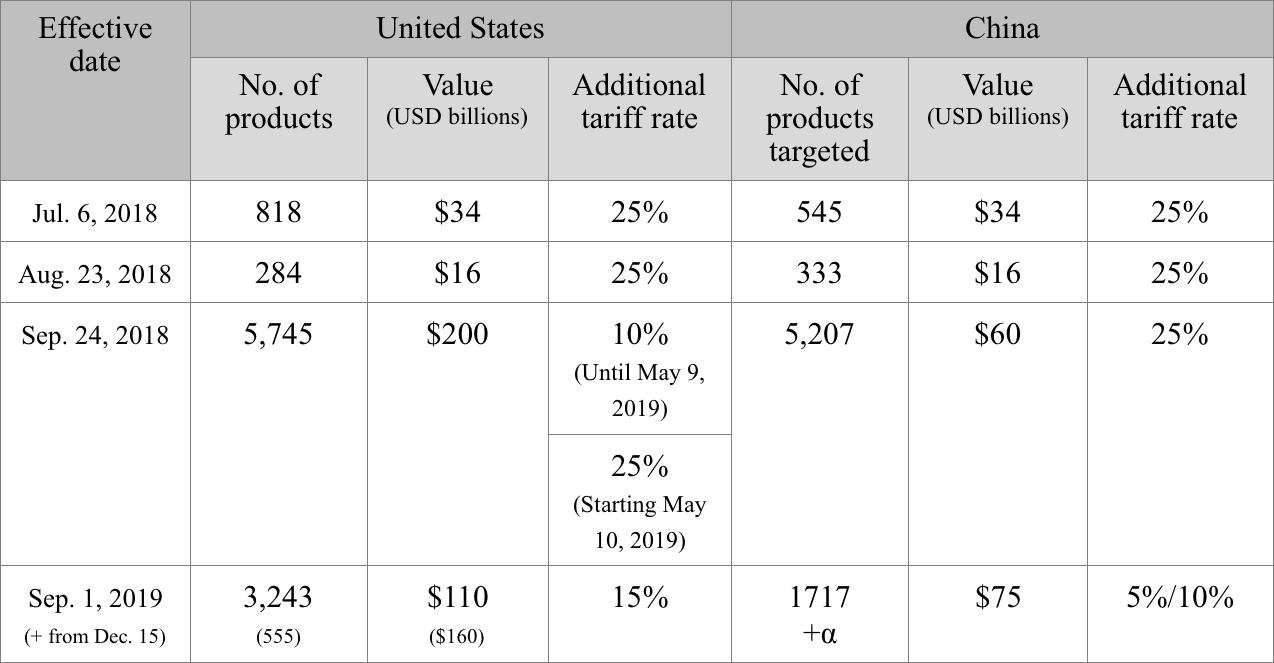 Table 2. Six theories on conflict within the context of economic interdependence 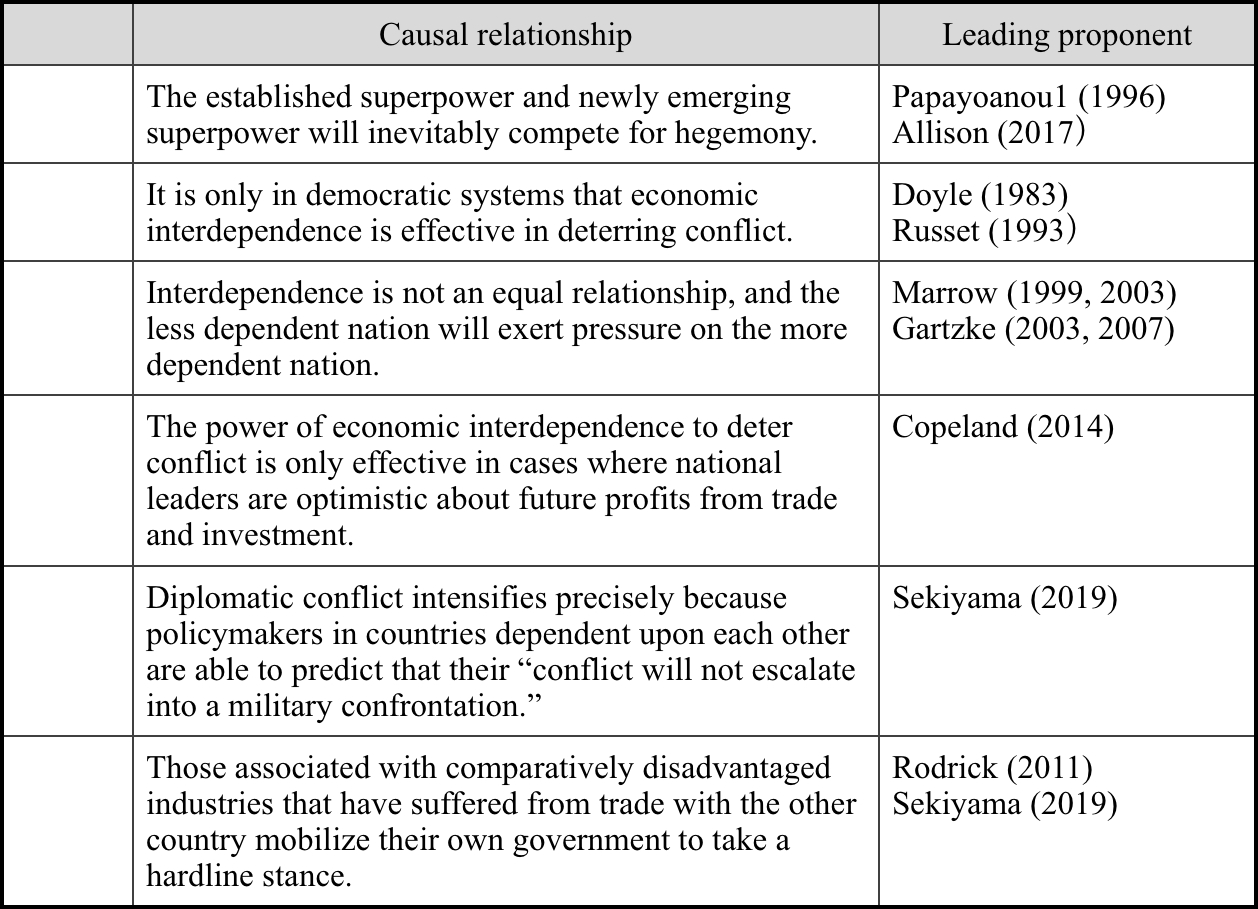 Of the above theories, this paper focuses specifically on 1), 5), and 6) as these appear to be most suggestive of President Trump’s policy toward China in discussing the background and outlook of the trade war between United States and China.

(1) Struggle Between the New and Former Hegemon
The first theory, which states that the established superpower and newly emerging superpower will inevitably compete for hegemony, is known as Thucydides Trap.
According to this theory, an established superpower fears the rise of a new emerging superpower and tries to prevent it from overtaking the established superpower’s hegemony. Furthermore, the emerging nation seeks to push aside the interference of the established superpower with the result that tensions inevitably rise between the two countries. To be sure, one cannot deny the presence of such a dimension in the present case where the United States has invoked sanctions to prevent China’s rise out of fear about its greater economic and technological prominence.
In his book Destined for War: Can America and China Escape Thucydides' Trap?, Harvard University Professor Graham Allison discusses 16 struggles for hegemony where a rising power threatened to displace an establish power during the past 500 years. Twelve of these resulted in war and military confrontation was avoided in four, or one-fourth of the cases.

(2) Conditions for War Avoidance
Professor Allison points out the factors that, in these four cases, staved off a military confrontation between the establish power and a rising power. These were:
・Mediation by the Pope or other supranational authority (Spain vs. Portugal at the end of the 15th century)
・Cooperation of the United Nations, European Union or other supranational framework (Germany vs. United Kingdom, France after World War II)
・Cultural similarities (United Kingdom and United States in the early 20th century)
・Mutually assured destruction with nuclear weapons (United States and Soviet Union during the Cold War)
Along with these, Professor Allison also points out the effect that economic interdependence has had on deterring confrontation.

(1) “Lack of Reserve” Common to US-China, Japan-China and Japan-Korea Relationships
It is precisely because mutually-dependent countries are able to foresee their “conflicts will not escalate into a military confrontation” that more minor diplomatic conflicts and economic friction are not staved off.
While a man and woman who have just started dating show discretion and kindness to each other, once their relationship is inseparably linked through many years of marriage, they lose that reserve and constantly quarrel.
It is the author’s view that a common feature of the relationships between Japan and China, Japan and South Korea, as well as the United States and China in recent years is this sort of interdependence that contributes to diplomatic conflict.

(2) Additional Revenue from Customs Duties on China
Particularly in the eyes of President Trump, as long as this conflict does not definitively rupture the relationship between China and the United States, the benefits of additional financial revenue generated by the tariffs raised on China are considerable. Multiplying the additional tariff rate by the value of products subject to tariffs given in Table 1 demonstrates that the increased tariffs on Chinese products in the first through third rounds is estimated to put an additional of $30 billion per year into United States’ coffers. If the fourth round of tariffs are completely invoked, simple calculation indicates another $30 billion a year for total additional revenue of $60 billion annually.
Moreover, these increases are by no means entirely defrayed by the US public. In fact, these tariff increases have hardly affected US consumer prices at all. There are three mutually related factors underlying why the increase in tariffs has not been reflected in US consumer prices.

(3) Avoiding the Cost of Increased Tariffs
The first reason is that the products subject to additional tariffs so far are those for which dependence upon China is relatively low, so the impact on overall US consumer prices has been limited. The degree of the US market’s dependence upon China has been just 6.2% in the first round of additional tariffs mainly targeting industrial machinery and other such products, 12.5% in the second round targeting integrated circuits and other products, and 20.5% in the third round covering mainly foodstuffs, furniture, etc. The total percentage of the US market’s dependent upon China for all three rounds has been limited to 15.7% (Cabinet Office, 2019).
The second reason is that it appears Chinese exporters have absorbed a considerable share of the additional tariffs. Ever since they were raised on Chinese products, US consumer prices have remained steady while the increase in Chinese producer prices has fallen. This may infer that Chinese companies may have lowered prices on their exports to the United States.
The third reason is the impact of a weaker Chinese Yuan. The USD-CNY exchange rate was 6.25 to the dollar in March 2018 when the United States levied additional tariffs on steel and aluminum products from many countries including China. However, immediately thereafter, the Chinese Yuan started to fall against the dollar and broke through the 7 CNY mark on August 5, 2019, a level approximately 12% lower than it was in March 2018.
The degree of the US market’s dependence upon China in the fourth round of tariffs will reach 42.0 % and an additional 10% tariff will be levied on products such as mobile phones, laptop computers and other products. It is more difficult to find replacement suppliers for these Chinese products so US consumers will be more easily impacted. However, the upward price pressure will likely be offset by a lower Chinese Yuan.

(1) Free Trade Losers
Another element that must be factored in is the pressure brought to bear from comparatively disadvantaged industries at home.
Standard economic textbooks teach how countries are able to profit from each other if they engage in free trade by specializing in industries where they have a comparative advantage. However, in order for everyone to profit from free trade, this theory is premised upon labor, capital and other inputs promptly shifting from industries losing out to imports and into other industries.

(2) China Shock
However, the reality is that labor does not move so easily between industries. In fact, according to a study conducted by researchers at MIT, over 1.5 million people lost their jobs in US industries due to trade and competition with China from 1990 to 2007. Approximate one fourth of these workers have flowed into cities as unemployed and the remaining three quarters are no longer even looking for work (Autor, Dorn & Hanson 2013).
Through elections, lobbying and other efforts, former workers and those in competitively disadvantaged industries insist on retaliating against countries that they claim brought them such misfortune. In addition, politicians campaigning for votes from these former workers also advocate retaliatory policies.

(3) Incompatibility Between Free Trade and Domestic Politics and Economics
It is this incompatibility that gave rise to the Trump presidency. When we look at the US-China conflict as a product of this inconsistency, the trade war between the United States and China is not a mere struggle for hegemony between the two countries, but a typical case exposing the incompatibility between a world economy where liberalization has gone too far and domestic political and economic stability (in other words, unemployment as well as fiscal and monetary stability). Similar incompatibilities have also come to the forefront in the United Kingdom and European Union countries. When this situation exacerbates, as happened in Europe prior to World War I, then there is a swing towards populism in domestic politics. The deterrent potential of economic interdependence no longer functions, creating a greater risk of the conflict intensifying.

That concludes my views on the structure of the US-China conflict within the context of economic interdependence, and I would like to conclude this paper by taking this structure into account in discussing the outlook for the future US-China relationship.

(1) Over the Short-Term
As for the outlook for the coming year, when the US-China trade war is considered based on the strength of President Trump’s domestic political appeal as discussed in the third section, it is unimaginable that the United States would bring this conflict to a quick end without any extraordinary concessions from China.
As discussed in the second section, this supposition is due particularly to the additional $30 billion in revenue that additional tariffs on China are estimated to bring into the US Treasury. This increased tariff revenue may also be used to finance pork barrel measures intended on shoring up support in the run-up to the presidential election. In May, President Trump did, in fact, announce $14.5 billion in subsidies to be dispersed to farmers disadvantaged by the trade war with China. It is also possible that this additional revenue may be used to lower taxes on middle income earners, infrastructure investment or other measures.
It is the author’s belief that, unless China makes extensive concessions, there is almost no incentive for President Trump to relinquish this additional revenue and wrap up the talks between the United States and China before the end of the year. There was a moment in April or May when it appeared that China would make substantial concessions, but these did not materialize most likely due to a lack of consensus within China.
One may imagine President Trump continuing to maintain a strong stance towards China and then reaching an agreement at the appropriate timing next year before the election. A loud claim of victory in the trade war with China would also raise stock prices in the United States and provide fuel for a major appeal to voters in the presidential race.

(2) Over the Medium and Long-Term
Of concern over the medium and long-term is a greater decoupling of the US and Chinese economies on account of this trade war. If the economies of these two countries were to further decouple, it would weaken the deterrent power provided by economic independence and increase the risk of a dispute erupting between the two countries, as pointed out in the first section.
Whereas, if current international economic rules are left to take their own course, then the incompatibility between a world economy that has taken liberalization too far and domestic political and economic stability, which was pointed out in the third section, will not be resolved, putting the two countries on a path of intensifying conflict with the apprehension that this conflict may develop into a dispute.
Consequently, the United States and China need to join hands with the goal of constructing new rules for the international economy, in other words curbing the scale of liberalization somewhat in order to reconstruct a set of rules, such as the former Brenton Woods system, with the intention of reconciling domestic employment as well as fiscal and monetary stability. It is also hoped that Japan will prepare a strategy that anticipates the likelihood of creating such new rules for ordering the international economy.