The Current State of the Chinese Economy

Uncertainty in the economy is growing in China due to intensifying US and Chinese trade tensions externally, and deteriorating indicators domestically. This paper examines the current state of the Chinese economy based on indicators up to June that include the GDP growth rate for April-June.

2. The change in indicators

Let’s take a look at the change in the main economic indicators. 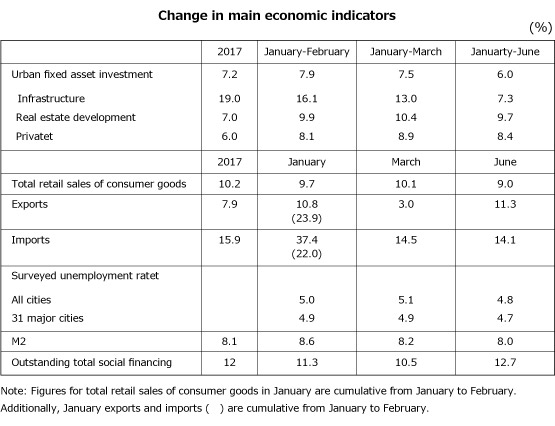 (1) Infrastructure investment
Growth in urban fixed asset investment has slowed, as growth in infrastructure investment that has supported investment so far has also slowed. Currently, China is trying to win the three tough battles strategy of 1) preventing and defusing major risks, 2) elimination of rural poverty, and 3) environmental measures as its key policies leading up to 2020. There is particular emphasis on the prevention and defusing of major risks, which focuses primarily on financial risk.
The financial risk is that the debt ratio of the government sector (in particular, local governments) and the corporate sector (especially state-owned enterprises) is high, and its reduction (deleveraging) is a big problem. Therefore, in order to prevent a further increase in the debt ratio of the government, the Ministry of Finance decided to keep the fiscal deficit at the same level as the previous fiscal year, thereby lowering the fiscal deficit to GDP ratio in fiscal 2018 from 3% to 2.6%. This had the effect of acting as a brake on infrastructure investment as the government had to control the amount of central government construction bonds and local government municipal bonds it issued.

(2) Real estate development investment
Real estate investment continues to maintain its high growth, as there are no signs the overheating housing market will cool off. The People’s Bank of China implemented monetary easing in the first half of 2016 to prevent a downturn in the economy and to stabilize the stock market. These surplus funds flowed into the housing market where housing prices soared in tier 1 cities and some tier 2 cities. Strict policies to limit housing purchases were implemented from the latter half of 2016 to 2017 in these cities, but prices are still currently high. However, the rise in housing prices has expanded nationwide as investment shunned the regulations and flowed into the remaining tier 2 and tier 3 cities.
In June, compared to the previous month, the price of newly-built condominiums in 70 large and mid-sized cities rose in 63 cities, was flat in three cities, and fell in only four cities. Even in terms of city size, housing prices at all levels are showing an upward trend, with tier 1 cities up by 0.6%, tier 2 cities by 1.2%, and tier 3 cities by 0.7%. This rise in housing prices is buttressing real estate development investment.
In addition, the boom in the real estate market has increased revenue from the transfer of state ownership rights, which is an important source of funds for local governments, increasing 43% year-on-year in the January-June period. This also contributes to reducing the debt ratio of local governments and is why local governments do not put much effort into controlling housing prices.
As the rise in housing prices expanded beyond urban centers, the burden of housing loans has become heavier, which has led to an increase in the debt ratio in the household sector. According to the People’s Bank of China, the ratio of outstanding debt to GDP at the end of 2017 was 250.3%, up 2.7 points from the end of the previous year. However, the debt ratio in the household sector is 55.1%, which is four points higher than at the end of the previous year.

(3) Private investment
Private investment at one point slowed to the 2% level in 2016, but Premier Li Keqiang introduced measures that included relaxing the entry restrictions of private enterprises, which caused the subsequent growth rate to pick up significantly. However, growth has once again slowed recently.
This is because the People’s Bank of China has operated under a tight monetary policy and severely restrained the expansion of shadow banking in order to prevent financial risks and lower the debt ratio of the corporate sector. For this reason, M2 and outstanding total social financing were kept low, and the weight of funding procurement through bank routes in the January-June period was 96.3% on a flow basis, 22.5 points higher than the same period last year.
However, shadow banking also includes nonbanking, which is a source of funding for private companies and small and medium enterprises. The shrinking of shadow banking has led to difficulties in obtaining financing and higher financing costs for small and medium enterprises, specifically small and micro enterprises, which is increasing the defaults on bonds issued by these companies. There have been 30 bond defaults this year from January to June 24 involving 19 companies, which may be inhibiting the growth of private investment.

(4) Total retail sales of consumer goods
igns of a slowdown in consumption already appeared last December. The double-digit growth in retail sales of consumer goods fell into the single-digit territory of 9.4% in December. At the time, there was debate as to whether this was temporary or a trend, but looking back over time, growth in consumption clearly shows a slowdown trend.
One of the causes may be the increase in the aforementioned debt ratio in the household sector. When the debt burden increases, there is less money to spend on consumption.
The sluggishness in income growth in urban areas may also be affecting consumption. The national disposable income per capita from January to June increased by 6.6% compared with the same period last year. However, if this is divided into urban and rural areas, the average disposable income per urban resident increased 5.8% and the disposable income per farmer increased 6.8%, so the growth rate of urban income is significantly lower than the overall growth rate. This also affected consumer spending, with real consumer spending per urban resident increasing 4.7% and increasing 10.1% per farmer in the January-June period. It is believed that the low growth in consumer spending in these cities is reflected in the sluggish growth in total retail sales.

(6) Employment
Both the nationwide city survey of unemployment rates and the survey of unemployment rates in the 31 largest cities, which were officially adopted as unemployment statistics from this year, show improvement trends.
The increase in newly-employed people in the January-June period was 7.52 million, and it has momentum to achieve the annual target of “over 11 million” ahead of schedule. The effective job offer ratio in the April-June quarter was 1.23, an increase of 0.12 points from the same period last year.
Employment indicators are still favorable in 2018 as they were in 2017, but there is the possibility that this trend may change depending on how US-China trade tensions develop and progress in weeding out “zombie enterprises.”

3. Macroeconomic measures in the second half of the year (net exports)

The following three meetings are notable.

(1) State Council Standing Committee meeting (June 20)
The Committee advocated strengthening loans to small and micro enterprises, reducing the deposit reserve ratio for that purpose, and promoting the “conversion of debts into stocks.” In response to this, the People’s Bank of China decided to reduce the deposit reserve ratio from July 5, release about 700 billion yuan in funds, and support policies for the “conversion of debts into stocks” with small and micro enterprises. This is a “fine-tuning” of monetary policy from somewhat tight management to a more relaxed stance. The reason for narrowing down the target is that simple monetary easing may further overheat the housing market and hamper structural reforms such as the weeding out of “zombie enterprises.”

(2) State Council Standing Committee meeting (July 23)
The Committee noted that “aggressive fiscal policy should be more aggressive,” with a focus on tax cuts and cost reductions. It deleted the traditional “business-neutral” expression from its statement while keeping monetary policy “moderate.”
Moreover, the Committee decided to resolutely liquidate “zombie enterprises,” revitalize private investment, and promote the stable growth of effective investment.

(3) CPC Politburo meeting (July 31)
As for the pressing concerns of managing the economy, the meeting noted that there was a “change in stability, new problems and new challenges to be addressed, and a noticeable change in the external environment.”
Regarding macroeconomic policy, the Politburo emphasized stabilizing employment, finance, foreign trade, foreign capital, investment, and forecasts, and would prioritize reinforcing vulnerable areas in the infrastructure field with respect to supply-side structural reform. The Politburo would also better link the prevention and defusing of financial risks, and the strengthening of financial services to the real economy.
Regarding reforms and opening up, it would promote significant reform measures with clear effects and implement major measures to significantly relax entry into the market. In addition to giving prominence to employment stability, it would decisively stop the rise in the housing market with respect to the real estate market, which shows no signs of cooling off.

Currently, China is advancing “structural deleveraging” to reduce its debt ratio while promoting structural reform. However, in the process of doing so, there are concerns about matters such as the cooling off of investment and consumption, difficulties in financing and high funding procurement costs for small and micro enterprises, and defaults on bonds issued by these companies. In addition, the heightened trade tensions between the United States and China is casting a dark shadow over the direction of the economy.
The Chinese economy finds itself in a difficult dilemma. Pressure on fiscal and monetary policy seems to be intensifying as the GDP growth rate in the April-June quarter slowed from the January-March quarter. However, if the budget deficit is simply expanded to invigorate the economy, the debt ratio of the government sector will further expand. Also, monetary easing risks further overheating the housing market and increasing the housing loan debts of the household sector.
One distinct feature of economic policy in the second half of the year is that the role of the State Council Standing Committee has come to the forefront. In centralizing power with General Secretary Xi Jinping, none of the considerations of the State Council Standing Committee have been published regarding policy for the second half of the year, and only the summaries of the CPC Politburo meeting and roundtable meeting of non-party members before it have been published at the end of July. However, the release of summaries of the meeting on June 20 along with the meeting on July 23 indicates the possibility that the role of the State Council or of Premier Li Keqiang with respect to macroeconomic policy has been reviewed again given various internal and external circumstances.
Amid the US-China trade tensions that are turning into an impasse, the Xi Jinping leadership has laid out the direction in which to further promote reforms and opening up. In order to alleviate the distrust of China, which is deeply spreading among intellectuals in the United States, it is necessary to thoroughly deregulate private enterprises and foreign capital entering the market, strengthen the protection of private property rights and intellectual property rights, and boldly push forward with reforming state-owned enterprises. Among these, it is interesting that Vice Premier Liu He, in charge of negotiations with the US, was made the head of the State Council Leading Small Group for State-owned Enterprises Reform in July. Ahead of the 40th anniversary of the reforms and opening up, it remains to be seen what kind of significant measures the Xi Jinping leadership will be able to devise.