Over the six day period from May 11-15, the first interpreter training meeting of 2013 was held at the National Center for the English Language, an affiliate of Yangon University. The seminar was attended by 12 individuals selected from various ministries.


During the training, various topics were used as teaching tools, including economic issues surrounding the ASEAN, immigration issues and resource problems, including water issues, and issues related to the ASEAN Economic Community, which is scheduled for construction by 2015. Furthermore, in consideration of the relay interpreter system (In this system, one language is used as a base language. A given language is first interpreted into this language, then is re-interpreted into other languages as necessary) used as ASEAN Summit meetings and the like, one trainee first interpreted from English into Burmese, then the other trainees interpreted back into English to try to identify areas of discrepancy and reasons for any mistakes. In addition, exercises and lectures were conducted on the problems that arise when interpreting between the Burmese language, where, like Japanese, the verb comes at the end of the sentence, and the English language, where the verb comes at the start. Possible solutions to the difficulties presented by this difference were also examined.

In addition, a deputy minister from the Myanmar Ministry of Education explained the secondary outcomes of this project. It is expected that for two weeks from the 20th May 2013, intensive training for teachers of interpreters will be held at the center. In this training session, six of the participants from the Ministry of Education who took part in the SPF-funded 5th Meeting to Train Interpreters (Jan 2013) acted as lecturers, and also worked on creation of a textbook for didactic purposes.

The second seminar for interpreter training in 2013 is scheduled to take place for six days from July 15 in Yangon. 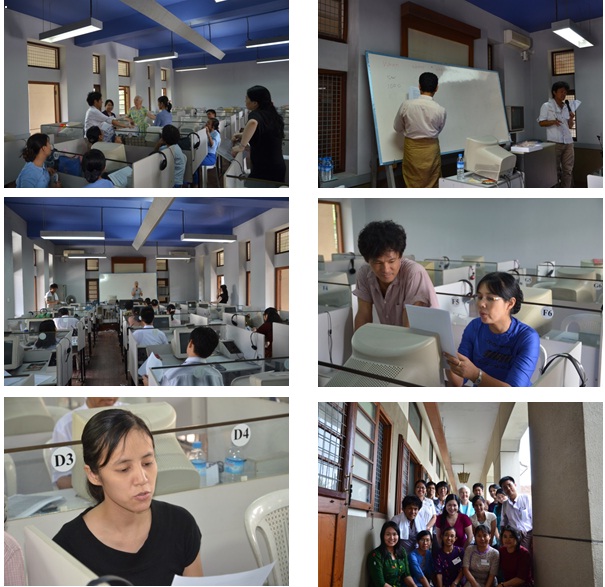