OPRI-SPF Virtual Seminar on “Climate Security” in the Indo-Pacific

March 12, 2021－The Ocean Policy Research Institute of The Sasakawa Peace Foundation (OPRI-SPF) hosted a closed seminar entitled ‘‘Climate Security in the Indo-Pacific”. In recent years, the emerging concept of "Climate Security," which focuses on the security implications of climate change, has been gradually gaining recognition. This seminar was held to deepen the knowledge of the relationship between climate change and regional security, especially from the perspective of maritime security, with three experts from Australia, France and Japan on the panel, and with the participation of government officials and defence personnel.

In the opening remarks, Dr. Atsushi Sunami, President of The Sasakawa Peace Foundation and Head of OPRI-SPF, noted that climate change is one of the main themes of the 9th Pacific Islands Leaders Meeting (PALM9) to be held this year in Japan, and stressed the importance of discussions on policy responses to this issue. He pointed out that ‘Climate Security’ is still a new concept in Japan, and expressed his hope that this seminar would help enhance understanding of the implications of climate change in the context of regional and national security.

Dr. David Brewster, Senior Research Fellow at College of Asia & the Pacific, The Australian National University, noted that climate change poses environmental threats such as more severe cyclones, rising sea levels, and declining fisheries resources. He pointed out that these threats are interacting and could pose cascading security threats. As a proposal for a regional security response to climate change in the Indian Ocean and Southern Sea, he emphasized the importance of strengthening regional cooperation under the initiative of countries that have the capacity to deal with environmental threats, especially disaster response, while utilizing the existing and new security forum and mechanism.

Mr. Tom Haristias, Desk Officer for Climate Security, Directorate General for International Relations and Strategy, French Ministry of Armed Forces, stated that climate change is already a security threat and that France, with its overseas territories in the Indo-Pacific, is particularly active in understanding and anticipating climate change risks. He also mentioned that the French Ministry of Armed Forces is working to reduce greenhouse gas emissions on military facilities and improve humanitarian aid and disaster management systems under the concepts of “Green Defense” and “Climate Security”. In both of these areas, it is important to build public and private partnerships.

Prof. Hideshi Tokuchi, Distinguished Non-Resident Fellow of the Sasakawa Peace Foundation-USA (SPF-USA), noted that climate change is one of the highest priorities for the U.S. under the Biden’s administration, and emphasized the importance of climate change not only as a global issue but also for national security. He suggested five ways in which Japan and the U.S. could cooperate to address Climate Security: promotion of humanitarian assistance and disaster management cooperation, intelligence cooperation, education and training for medical and health cooperation, joint technological research and development for green equipment, and policy dialogue on the geopolitical implications of climate change.

After the presentations by the three speakers, a question-and-answer session was held, moderated by RADM. (retired) Kazumine Akimoto, Senior Research Fellow of SPF-OPRI. An interactive and lively discussion ensued between the speakers and participants, particularly on how the regional security system in the Indo-Pacific region should respond to the new threat of climate change, and it was agreed that there is a need for continued discussion on this topic.

In her closing remarks, Dr. Miko Maekawa, Senior Research Fellow of OPRI-SPF, introduced OPRI’s research activities on Climate Security and its plan to publish its first book on climate security in Japanese in the second half of this year. The seminar was closed with high expectations for continuous discussion on Climate Security in the Indo-Pacific. 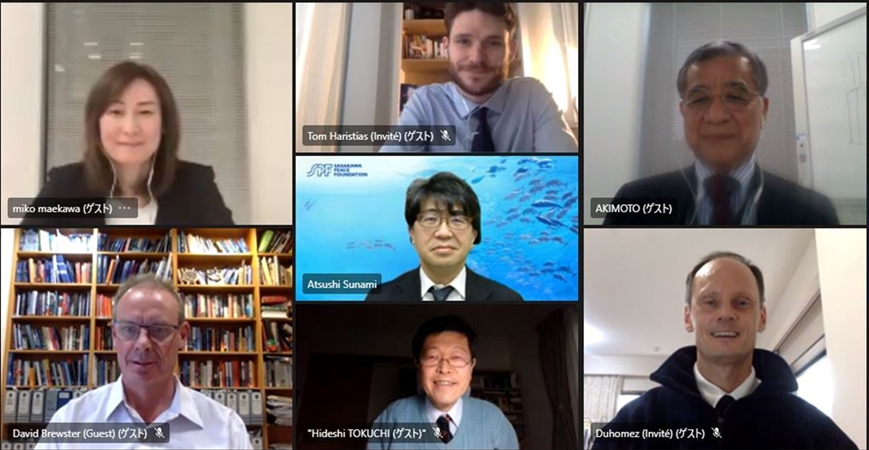