Political Leadership and Diversity - Towards the gender equal political participation 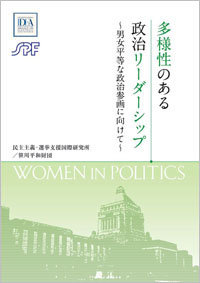 Gender equality in politics is significantly slow world-wide compared with other areas such as economics, education and health. According to the data provided by the Inter-Parliamentary Union (IPU), proportion of women in parliament in the world is, in average, 22.6% in 2016, and 19.1% in Asia-pacific region. In Japan, proportion of women in the House of Representatives is only 9.5% and 15.7% in the House of Councilors. With this conditions in mind, the Sasakawa Peace Foundation launched the program on "Women's Political Leadership and Global Comparison". This book is issued as part of its outcomes, and a complilation of few articles from different books published by the International Institute for Democracy and Electoral Assistance (IDEA) including Women in Parliament: Beyond Numbers, Revised Edition (2005)、The Implmentation of Quotas: Latin American Experiences (2003)、and The Implementaiton of Quotas: European Experiences (2005).

Pioneering Quotas: The Argentine Experience and Beyond

Putting the Mandate into Practice: Legal Reform in Costa Rica