It is clear that a variety of human factors, including habitat reduction and overfishing, contribute to the decline in the eel catch, but there is also the possibility that changes in the ocean atmospheric system are affecting eel ecosystems. Identification of eel spawning grounds requires an extensive ocean survey, and thorough monitoring of eel movement from habitat to spawning grounds is also necessary.

Anguillid eels are widely distributed worldwide in various habitats such as rivers, lakes, estuaries, and coastal marine waters. Eels are an important source of food for sea animals and birds and have a high economical value. Therefore, they are of great interest in oceanography, meteorology, and biology. The Japanese eel Anguilla japonica is mainly distributed in the western Pacific Ocean. Its abundance declined in the past few decades, and it is now listed as an endangered species in the IUCN red list. Among the Northern Hemisphere species of eels that have all experienced declines, the Japanese eel seems to have shown the earliest recruitment declines that started in the 1970s. After about 2010, its annual recruitment had decreased by as much as 90% compared to eel catches in the 1960s. Due to the significant reduction of eel catch, the market price increased rapidly in the recent years. The price has raised by 10-20 times in 20 years. Although there are clear indications that species like the Japanese eel and Atlantic eels have experienced a variety of anthropogenic impacts such as drastic habitat reductions and overfishing, changes in the ocean-atmosphere system have also been evaluated for the potential to reduce recruitment of anguillid eels. Changes in ocean productivity could cause increased early larval mortality due to a lack of food or changes in spawning location or ocean current patterns could reduce successful larval transport.
The Japanese eel appears to be especially vulnerable to changes in larval transport. It is distributed across East Asia in areas that are adjacent to the western Pacific Ocean (Taiwan, China, Korea, Japan; Fig. 1), but their spawning area is located far offshore along the West Mariana Ridge within the westward flowing North Equatorial Current (NEC). Their reproductive-stage eels (referred to as silver eels) migrate over a distance of thousands of kilometers to reach their spawning area where their eggs, newly hatched preleptocephali, and spawning condition adults have been collected. The spawning area of Japanese eel was first discovered by Prof. Katsumi Tsukamoto and his team, after their years and years surveys. The eel larvae, called leptocephali, are then transported from the spawning area by ocean currents, toward their growth habitats in the freshwater and estuarine habitats of East Asia. Those marine explorations for searching the spawning ground of Japanese eel lasted over six decades before eggs were collected. The historical surveys were not limited in a specific region, the eggs were indeed caught hundreds and thousands of kilometers away from the early proposed region near Japan. The discovery of the spawning area of Japanese eel resulted in the validation of many hypotheses intended to narrow-down the space and timing of spawning events through the analysis of historical leptocephalus catches and estimation of hatching dates using daily rings of otolith (ear stone). The results of several surveys since then indicated that spawning occurred near the southern end of the West Mariana Ridge a few days before each new moon during April to August.

The ocean currents between the spawning area and growth habitats are highly variable (Fig. 1). The NEC is a westward current located mainly between 8−16°N, which then bifurcates into the northward flow (the Kuroshio) and southward flow (the Mindanao Current). The subtropical countercurrent (STCC) is located north of the NEC from 17¬¬−27°N and is a weak (~2 cm s−1) eastward flow that generates many mesoscale eddies with sizes of 150¬¬−300 km. STCC eddies have greater rotation speeds than the propagation speed, inferring a high potential of trapping eel larvae within the eddy interior. The westward propagating eddies eventually merge with the Kuroshio. The Kuroshio is the western boundary current of the North Pacific Ocean that flows along the east coast of the Philippines and Taiwan before entering the East China Sea and passing near the south coast of Japan. The Kuroshio has a strong speed of 1−2 m/s, a width of about 100 km, and its depth can penetrate to 600−1000 m. It has been pointed out that there are no apparent physical oceanographic processes that are able to passively transport large numbers of leptocephali across the main parts of strong western boundary currents such as the Kuroshio or Gulf Stream. So it appears that swimming would be required to cross or detrain from these powerful currents. 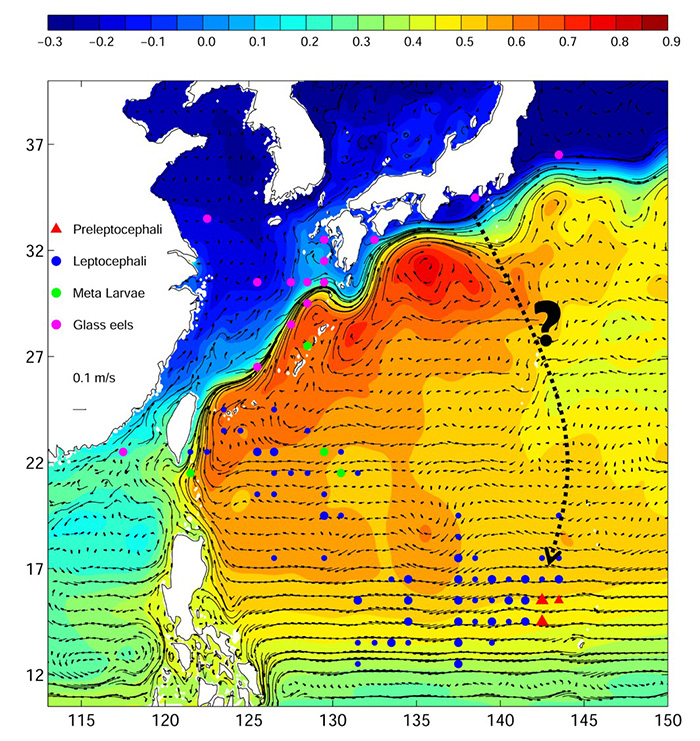 Since Danish fishery biologist Johannes Schmidt’s renowned discovery in the 20th century, the Sargasso Sea has been widely considered to be the Atlantic Ocean spawning area for the European eel Anguilla anguilla and American eel Anguilla rostrata. After many research cruises collecting transparent leaf-like eel larvae known as leptocephali, Schmidt proposed a theory that eels in the Atlantic Ocean were born in the Sargasso Sea and then transported by currents to the Caribbean Sea and North American coastal waters in the case of American eels, and to the Mediterranean Sea and European coasts in the case of European eels (Fig. 2). In recognition of this achievement, the United Kingdom’s Royal Society awarded Schmidt its Darwin Medal in 1930.

Our recent study introduced new insights on the location of Atlantic eels spawning areas by proposing arguments based on historical observations. We tested an alternative Atlantic eel spawning area using numerical simulations that includes swimming and orientation behaviors of leptocephali. The hypothesis spawning area was set eastward of Sargasso Sea at the intersection between the Mid-Atlantic Ridge and the oceanic fronts. The simulation results showed a similar larval distribution to observation, whether the departure of virtual larvae are included within or outside the historical Sargasso Sea spawning areas. Although eggs and spawning-condition adults have not been collected there, this lack of collection does not mean absence. There has also been no collection of eggs and adults or even preleptocephali outside Sargasso Sea. These apparent “false negatives” may result from insufficient sampling efforts in the Sargasso Sea and Mid-Atlantic Ridge areas

The oceanic migration of silver eels starts from their continental growth habitats and ends at the spawning area had not been fully observed. The potential migration strategies could be explored by the combining effort of on-site observation and numerical simulation for further understanding the eel ecology. 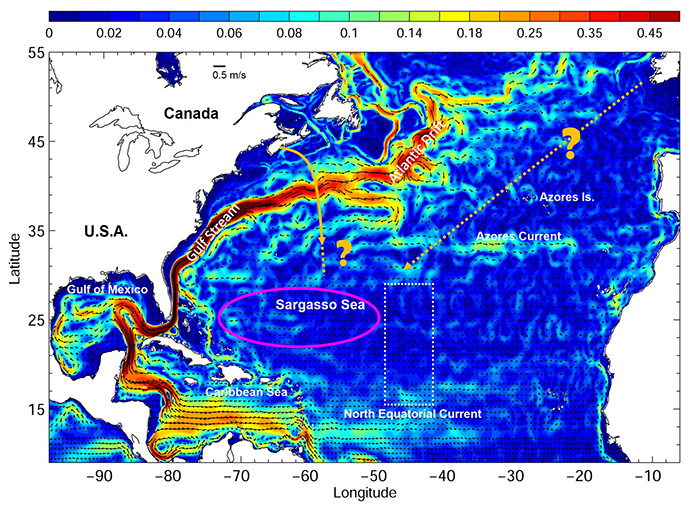