HOME  >  OceanNewsletter  >  Thinking of the Arctic through the Board Game, The Arctic

Thinking of the Arctic through the Board Game, The Arctic

A role-playing board game has been produced under the framework of the Arctic Challenge for Sustainability (ArCS) project. In the learning tool on the Arctic science, The Arctic, players assume the role of an oceanographer, indigenous personnel, fisher, cultural anthropologist, industry personnel, or diplomat, and aim to maintain a certain level of environment, culture, and economy in the context of rapidly decreasing sea ice in the Arctic region. Aside from holding many trial sessions both domestically and abroad up until now, we are also loaning the game to research, educational, and government organizations.

The Arctic1 is a role-playing board game used as a research and learning tool. It was produced within the framework of the Arctic Challenge for Sustainability (ArCS) (2015 - 2020) through funding by the Ministry of Education, Culture, Sports, Science and Technology. The ArCS project has been promoted primarily by the National Institute of Polar Research (NIPR), the Japan Agency for Marine-Earth Science and Technology (JAMSTEC), and Hokkaido University. ArCS has helped enhance cooperation between the natural sciences, the humanities, and the social sciences while providing information to society at large. As part of the project, an event for the general public was held at the National Museum of Emerging Science and Innovation (Miraikan) in Odaiba, Tokyo, in January 2018.
Along with three lectures by ArCS researchers, the event featured displays of sea ice collected during an Arctic voyage by the ocean research vessel Mirai and indigenous tools. Participants were delighted with the event. However, a one-day event can only convey the situation in the Arctic to the actual participants. We therefore decided to create a hands-on learning tool that could be used more sustainably and broadly. Incidentally, while the author of this paper is a researcher of natural phenomena in the Arctic Ocean, the game was produced by a team headed by Dr. Hajime Kimura, a specialist in international law who worked at JAMSTEC until March 2020. We collaborated with researchers from several institutions who specialize in cultural anthropology, biological oceanography, glaciology, and international politics. We also worked with the National Museum of Emerging Science and Innovation (Miraikan) and professional game companies.
Developing this new learning method involved trial and error, such as trying existing learning tools, examining the advantages and disadvantages of different prototypes (one prototype was similar to backgammon), and adjusting the balance between gameplay, education, and convenience. There were a variety of situations and research topics that we wanted to introduce through the game. However, we had to choose the most vital areas due to a concern that if we included too many detailed and specialized items, the game would not be interesting. The original Japanese version was released in August 2019, about a year and a half after its conception.

Overview of the Board Game

Players participate in one of the following roles: oceanographer, indigenous personnel, fisher, cultural anthropologist, industry personnel, or diplomat. The aim is to maintain a certain level of environmental, cultural, and economic sustainability in the Arctic in the face of rapidly declining sea ice. The game was designed for high school students and older, but we found that even upper elementary school students could understand and play the game during trials. If one person plays each role, only six people can play at a time. However, it can be played by as few as four players or as many as 18 if each role is assigned to a group of three. The standard game time is about 45 minutes, but it can be finished within 30 minutes by adjusting the time for commentary and discussion. In a university lecture, it is possible to use a whole 90 minutes for one session, including a 5-minute intro video and a mini-lecture providing basic knowledge of the Arctic's environment.
The main game board features an above-view map of the Arctic. It begins with 35 tiles on top of the map that mimic the actual distribution of sea ice. During a turn, players flip over a sea ice tile, and various events that could happen in the Arctic region are revealed. Players respond to these events based on the explanations and instructions written on the corresponding page of the Event Book. For example, an ocean acidification event causes changes to environmental, cultural, and economic levels. The game also features choice-based events such as "Will you promote plankton research?" or voting events such as "Will you invest in fossil fuel extraction?" Players then need to decide, using the limited available budget whether those are necessary. Players are also encouraged to influence each other's decisions by making arguments based on their role in the game. The game ends when the sea ice tiles near the North Pole have been flipped over. The winner is determined according to the environment, culture, and economy levels at the end. There are also scenarios where everyone can win, and everyone can lose.
The game has numerous educational features. First, the actual sea ice distribution is represented by the thickness of the tiles (2mm, 4mm, and 6mm), with the Canadian side being thicker than the Russian side. The number of tiles decreases as the game progresses, allowing players to gain a true feeling for how Arctic sea ice is decreasing. Clever design reveals Northern Sea Routes on the map as the sea ice tiles decrease. Researchers from a wide variety of fields were involved in the game's production and operation. The content provides a comprehensive picture of what Arctic research is all about. The explanations in the Event Book can also be used as a reference textbook. Winning requires implementing necessary measures with a limited budget and maintaining a balance between the environment, culture, and economy. In addition, the fact that individual players may find that aiming to win produces an undesirable outcome, which prompts realistic discussions regarding the complexities of the situation in the Arctic. There is no right or wrong answer for each decision. Instead, it is more important to consider what caused specific outcomes than winning or losing. 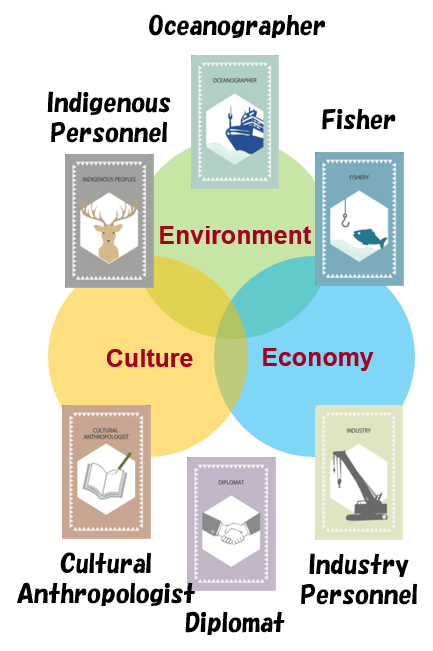 Players take on one of six roles to maintain certain environmental, cultural, and economic levels in the Arctic as sea ice rapidly declines. 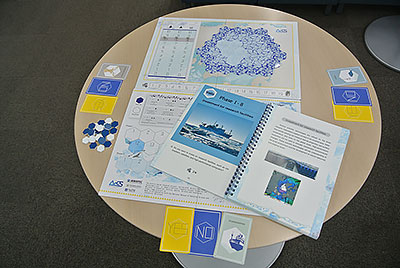 English version of The Arctic, an Arctic research learning tool. If a Voting Event occurs, players refer to the description in the Event Book and submit a Yes/No card.

Since the Japanese version’s release, our team has been actively promoting The Arctic at the institutions to which our members belong. The game has also been promoted at events conferences and general lectures in Japan and abroad. We have also produced an English version and a Children's Event Book with explanatory text rewritten in simpler terms in response to requests. Our group has also visited large numbers of schools. Unfortunately, these visits were mostly canceled from February 2020 onwards due to COVID-19 as schools were closed and people refrained from going out. Due to the current difficulties around face-to-face play, we also created an online version that can be conducted remotely, enabling the game's use in online lectures at universities. As well as the hands-on sessions, we also lend our products to schools, research institutes, government agencies, and indigenous groups in Japan and abroad (the standard lending period is about one month, but this is negotiable). We've also participated in online events organized by Miraikan, which were broadcast on the museum's YouTube channel2. Applications for hands-on sessions or to borrow the game can be made through The Arctic's website. Since there are many other phenomena and studies in the Arctic that have not been introduced in the current version, future developments could include making a newer version while maintaining the current basics of the game. Producing a browser or smartphone app version of the game may lead to even wider usage, although there are technical and cost challenges related to this. (End)