HOME  >  News  >  Results: Public Symposium on "The Conservation and Sustainable Use of Marine Biological Diversity of Areas beyond National Jurisdiction (BBNJ)"

Results: Public Symposium on "The Conservation and Sustainable Use of Marine Biological Diversity of Areas beyond National Jurisdiction (BBNJ)"

The Ocean Policy Research Institute of the Sasakawa Peace Foundation (OPRI-SPF), along with co-organizers the Japanese Institute for the Law of the Sea (JAILOS) and the Japan Society for Ocean Policy (JSOP), under a grant from The Nippon Foundation, co-hosted a public symposium titled "The Conservation and Sustainable Use of Marine Biological Diversity of Areas beyond National Jurisdiction (BBNJ)" on January 29, 2018.

1. Background and Purpose
While the high seas cover around 70% of the world's oceans, there are no explicit references regarding the conservation and sustainable use of the marine biological diversity of areas beyond national jurisdiction (BBNJ) in existing legal frameworks such as the United Nations Convention on the Law of the Sea (UNCLOS) and the Convention on Biological Diversity (CBD). Following the recommendations made by the fourth session of the BBNJ Preparatory Committee (PrepCom) in July 2017, the United Nations General Assembly decided to convene an "Intergovernmental Conference" to negotiate the text of an international legally binding instrument under UNCLOS on BBNJ at its seventy-second session, and further decided that an intergovernmental conference will take place from September 2018.

Against this backdrop, the three organizations co-hosted the symposium in an effort to promote domestic understanding, recognizing the importance of providing a forum to discuss the impacts of the BBNJ issues on Japan. 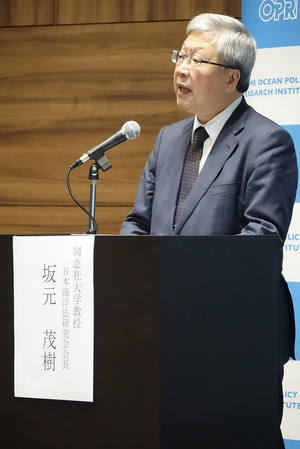 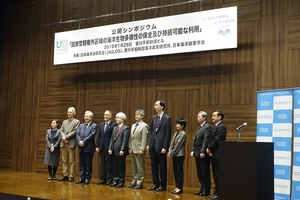 ２．Summary
1)  Prof. Shigeki Sakamoto (Doshisha Uni. Faculty of Law/ Chairman, JAILOS) gave the opening remarks on behalf of the three organizations, expressing their gratitude to the participants, panelists, co-organizers, and for the financial support that allowed this event to take place. In addition, he mentioned the importance for Japan, as a state surrounded by the oceans, to actively participate in BBNJ negotiations, as well as stating that the symposium is one of the outcomes of research activities on BBNJ by JAILOS.

2)  In the morning session, chaired by Prof. Kimio Yakushiji (School of Law/ Ritsumeikan Uni.), five speakers gave presentations on the BBNJ negotiations as well as the legal and policy perspectives of the negotiations.

Mr. Zentaro Naganuma (Counsel for Treaties Negotiation, Law of the Sea Division, MOFA Japan), in his presentation, "A new BBNJ agreement: discussions in the preparatory committees and future perspectives,"explained the four main topics discussed in the negotiations so far: 1) marine genetic resources (MGRs), including questions on the sharing of benefits, 2) area-based management tools, including marine protected areas (MPA), 3) environmental impact assessments (EIA), and 4) capacity building and transfer of marine technology. After explaining the possible ways forward for the discussions, he stated that Japan will continue to participate in BBNJ negotiations in the hopes of achieving a new agreement that is well balanced in terms of conservation and sustainable use, feasible, and has the universal participation of countries.

Dr. Miko Maekawa (Manager, Ocean Research and Development Department, OPRI-SPF), in her presentation, "BBNJ PrepCom: Report from an NGO Perspective," gave an overview of the negotiations, and introduced the roles that NGOs play in international conferences. She especially mentioned the importance of advocacy, the sharing of knowledge, outreach, lobby activities to increase public interest, organizing and implementing side events and workshops at such conferences, creating opportunities for information sharing and discussions, etc., and showed that their roles in the negotiation process are far reaching. In addition, she stressed the importance of NGOs' continued participation to the negotiations, and that OPRI-SPF would also continue to play a role in the negotiation process.

Prof. Yasuko Tsuru (Faculty of Global Studies / Sophia Uni.), in her presentation, "The Permeation of Environmental Law into the Law of the Sea: The Effects of CBD on BBNJ," gave an overview of the historical background regarding discussions on BBNJ. Considering various issues that had heretofore been understood as matters in the field of the Law of the Sea, she mentioned that the influence of environmental law has grown due to an increased importance on considering the consistency of ecosystems, and that the BBNJ issue could be raised as a major example of this development. She mentioned that discussions on protected areas and access and benefit-sharing of genetic resources in the ocean started to be recognized particularly after the adoption of the Jakarta Mandate (Jakarta Mandate on Marine and Coastal Biological Diversity) under the CBD in 1995, and that discussions on BBNJ gained their main impetus following the outcome of the CBD-COP10 in Nagoya in 2010. Against this backdrop, she pointed out how developing countries have shown excessive expectations in current negotiations, and said that going forward, the gathering and sharing of data based on scientific knowledge will be important.

Prof. Kentaro Nishimoto (Graduate School of Law / Tohoku Uni.), in his presentation, "Discussions on MPAs in the BBNJ PrepComs," focused on the central discussion points regarding the establishment of MPAs in areas beyond national jurisdiction in the BBNJ negotiations. Prof. Nishimoto first mentioned that while the concept of MPAs is familiar to many, there is no single universally recognized definition for them, so there is a need to take into account the various types of measures that have been adopted. With this in mind, he mentioned that the BBNJ negotiations mainly focused on the discussion regarding the process for establishing MPAs and ensuring effectiveness of their management mechanisms. He also mentioned that the negotiations gave rise to three different models of approaches to the issue: the "Global Approach" which envisages the new agreement would be at the center of measures regarding MPAs; the "Regional Approach" which envisages existing frameworks would be at the center; and the "Hybrid Approach" that includes measures midway between the both. However, since negotiations in the PrepComs did not finalize any specific measures, he noted that the future discussions need to be focused not only on conceptual or philosophical content but also on specific and practical components.

3)  In the afternoon session, chaired by Dr. Keita Furukawa (Director, Ocean Research and Development Department, OPRI-SPF), three panelists made presentations from the perspective of the natural sciences.

Prof. Haruko Takeyama (Faculty of Science and Engineering/ Waseda Uni.), in her presentation "Coral Reef Research - Report and recommendation from a field research focusing on Okinawa," gave an overview of the history and development of related technologies for genetic research, and explained the study of genes (genomes) and genetic resources, pointing out the importance of development, utilization, and conservation of ocean resources based on science, using examples from the frontline of study on coral reef conservation. She especially emphasized that important techniques and methods for the study of genes had already developed in the 1990s, when the CBD was adopted, and that from this period onward, there have been different views with regards to genes. In addition, she pointed out that genetic resources today are computerized and available through databases, and through development of molecular biology and related technologies, genetic analysis (i.e. DNA sequencing) is available at lower cost, so they are not likely to become hurdles for developing countries to move into this field. She concluded that solely pursuing monetary benefit sharing without taking any risks would not lead to the development of developing countries.

Prof. Joji Morishita (Department of Marine Policy and Culture, Tokyo Uni. Of Marine Science and Technology), in his presentation, "Discussions on area-based management tools including MPAs: BBNJ and fisheries," discussed space-based management approaches, including MPAs, as one of the main topics of BBNJ from the point of view of fisheries. In his presentation, he noted that while regional fisheries management organizations (RFMOs) cover fisheries activities carried out in almost all of the world's oceans and seas, catch on the high seas make up just under 10% of the total catch. Assuming that an MPA related to BBNJ has been established in the high seas, he pointed out the need for further discussion on whether management, monitoring and evaluation of the MPA would be possible and feasible to implement under the above-mentioned global approach. Noting that there are quite a few MPAs called "Paper MPAs" which are officially established but with little sign of protection and conservation in that area, he stressed the importance of examining practical aspects of MPAs such as effective operation and management of MPAs in the future negotiations of BBNJ.

Dr. Yoshihisa Shirayama (Executive Director, JAMSTEC), in his presentation, "How to conserve the ecosystems of areas beyond national jurisdiction," spoke of the richness of marine diversity in areas beyond national jurisdiction and that there remains much to be understood regarding organisms in these areas, as well as the importance of addressing the issue comprehensively and the concept of adaptive management for the conservation of BBNJ. He stressed the need to recognize that it is physically and economically impossible for humans to directly take action to conserve marine biological diversity in areas beyond national jurisdiction located more than 200 nautical miles from the coast and in the deep seabed, and, when considering the effective management measures for BBNJ, the differences regarding the conservation requirements and standards of coastal areas and of high seas must be recognized. Keeping these points in mind, he said that "adaptive management," an approach for monitoring, evaluation and action by acknowledging uncertainty and complexity of ecosystems, is important, and therefore that low-cost tools and techniques would be beneficial for conservation of BBNJ and for the participation of developing countries.

4)  The final session, a panel discussion chaired by Prof. Sakamoto, and with the speakers from the morning and afternoon sessions participating as panelists, discussed broadly on the issue of BBNJ from each perspective including questions raised from the floor. As the session chair, Prof. Sakamoto summarized the presentations made by each panelist and noted that the symposium revealed the need for establishing a new agreement with balanced, feasible, and universal characters. The panel then discussed in a cross-cutting manner based on their presentations, perspectives on the future BBNJ negotiations and issues including the role of Japan for the conservation and sustainable use of BBNJ.