Results: Special Forum on "Global Warming and the Oceans"

In recent years, as extreme weather events including heavy rains, droughts, unusually high temperatures etc. have increased in number, there has been growing public interest regarding the global warming lying at the backdrop of these issues. Coupled with the recent global warming "hiatus," there seems to be a particular interest in the relationship between global warming and the oceans. While the oceans help to absorb the heat from global warming, they also have the ability to temporarily release the heat back into the atmosphere just like the El Niño phenomenon. The role of the oceans in the climate system is not uniform, and it reflects the regional characteristics of global warming.

Prof. Syukuro Manabe (Princeton University, US), known for his pioneering work on global warming prediction models, visited Japan in October 2017. During his visit, the Ocean Policy Research Institute of the Sasakawa Peace Foundation (OPRI-SPF) hosted a special forum titled "Global Warming and the Oceans" based on his special interest in the relationship between global warming and the oceans, followed by a discussion between the speaker and Prof. Toshio Yamagata (JAMSTEC), who is also widely recognized to be an authority on climate variability studies.

Supported by: Graduate School of Science at the University of Tokyo, Japan Agency for Marine-Earth Science and Technology (JAMSTEC) 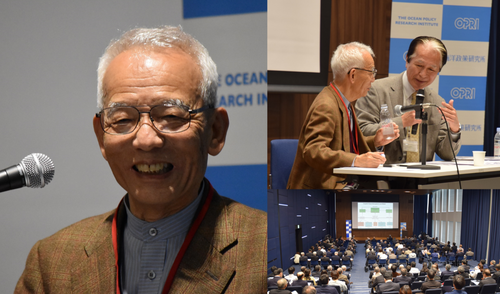 For more information, please see the references below.