On Thursday 28 May 2020, the digital edition of the 11th Monaco Blue Initiative “How can we place Marine Protected Areas and Other Effective Conservation Measures at the center of international discussions and act collectively for their development?” was co-organized by the Prince Albert II of Monaco Foundation and the Oceanographic Institute of Monaco as an online event. Dr. Atsushi Sunami, President, Ocean Policy Research Institute of the Sasakawa Peace Foundation (OPRI-SPF) addressed the event.

The theme of the event, “marine protected areas” was very timely as an increasing attention is given to examining the progress made in achieving the Aichi Target of protecting 10% marine areas by the end of 2020. The Target was adopted at the 10th meeting of the Conference of the Parties to the Convention on Biological Diversity in 2010. Discussions are also currently carried out regarding the post-Aichi target that will be adopted at the next 15th meeting of the CBD/COP (COP15). OPRI-SPF undertakes a research on blue economy and marine biodiversity in the context of achieving a sustainable ocean. Dr. Atsushi Sunami was invited to address the event.

H.S.H. Prince Albert II of Monaco (left) and H.E. Ms. Brune Poirson, Minister of State, attached to
the Minister for the Ecological and Inclusive Transition of France（right）

H.E. Mr. Virginijus Sinkevičius, European Commissioner for Environment, Oceans and Fisheries, H.E. Ms. Brune Poirson, Minister of State, attached to the Minister for the Ecological and Inclusive Transition of France and other distinguished speakers and panellists addressed the event.

At the panel discussion, Mr José Maria Figueres Olsen, former President of Costa Rica stated that the goal to protect 30% of the ocean is of utmost importance equally to keeping the increase in the average air temperature to 1.5℃, and posed a question to the panellists about the strategies to achieve the marine MPA target.

Dr. Atsushi Sunami responded by stating that science plays an important role in effectively implementing marine conservation. He underlined that the UN Decade of Ocean Science for Sustainable Development that will be commenced next year provides an impetus to advancing the scientific work to undertake marine ecosystem assessment, evaluation of effectiveness in conserving marine ecosystems, visualisation and information disclosure of the ocean, and use of satellite/aerial-underwater drones in monitoring of the ocean. Dr. Sunami emphasized that interdisciplinary science and research, and international cooperation remain to be important and OPRI-SPF facilitates multi-stakeholder dialogue on ocean polices and buttresses the basis for consensus-building in collaboration with international partners.

In a question and answer session, it was underpinned that in addition to the spatial expansion of marine protected areas, it would be equally important to enhance the quality of marine protected areas by raising the effectiveness of in-situ conservation, compliance and enforcement. It was also echoed that it would be vital to support policy and institutional transformation and capacity development for advancing marine conservation and sustainable use. 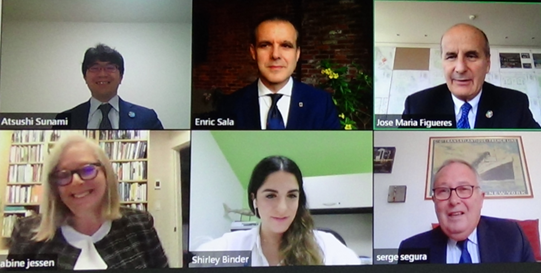 Throughout the discussions at the event, a buyout and vibrant movement was observed to enhance a momentum towards mobilizing collective actions and setting policy targets by the governments and organizations to promote marine environment protection and marine resource conservation and sustainable use. OPRI-SPF strives to carry out policy dialogues and research works with the view to contributing to achieving a sustainable ocean and facilitating the development and implementation of effective enabling policies.