The 25th UN Climate Change Conference (UNFCCC-COP25) was held at IFEMA in Madrid, Spain from December 2nd to December 15th 2019 at Feria de Madrid (IFEMA) Exhibition Center (including a two-day extension from the 13th). With the Government of Chile, President of the Conference, designating this year's conference as the Blue COP in recognition of the attention given to the oceans and the cryosphere, there were more than 100 ocean themed events held during the conference and the issue of "Oceans and Climate Change" also drew the spotlight in State level negotiations. As a result, in the COP25 Decision, Chile Madrid Time for Action, COP25's main output document (https://unfccc.int/resource/cop25/1cop25_auv.pdf), along with making the first reference in a COP Decision to the importance of the oceans as an element of the planet's climate system, also decided to establish a dialogue for Oceans and Climate Change at next June's SBSTA42.

The Sasakawa Peace Foundation / Ocean Policy Research Institute (SPF/OPRI) hosted the two-day Oceans Action Day event on December 6th and 7th. It was the largest among the many ocean related events held at the Blue COP. 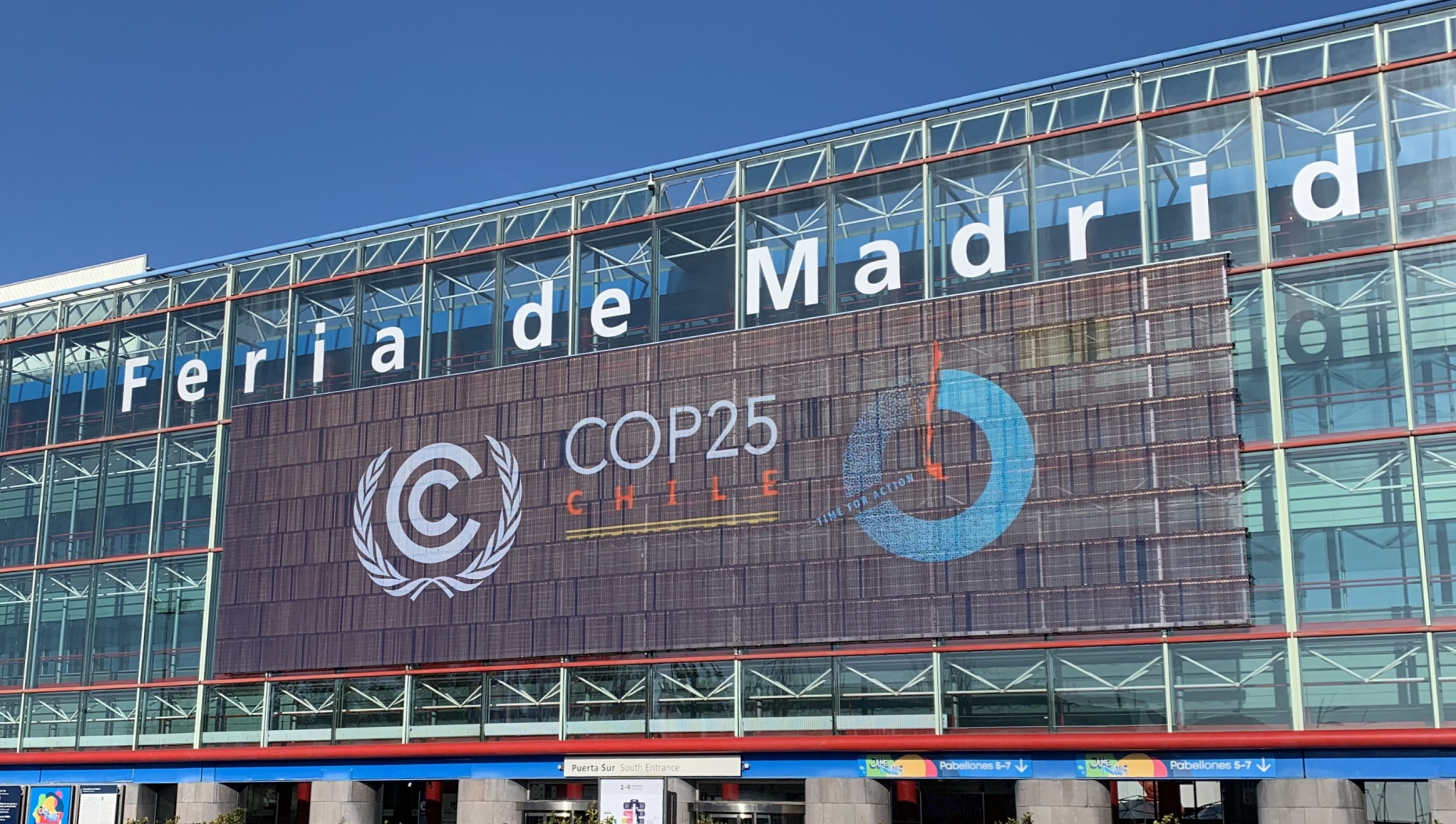 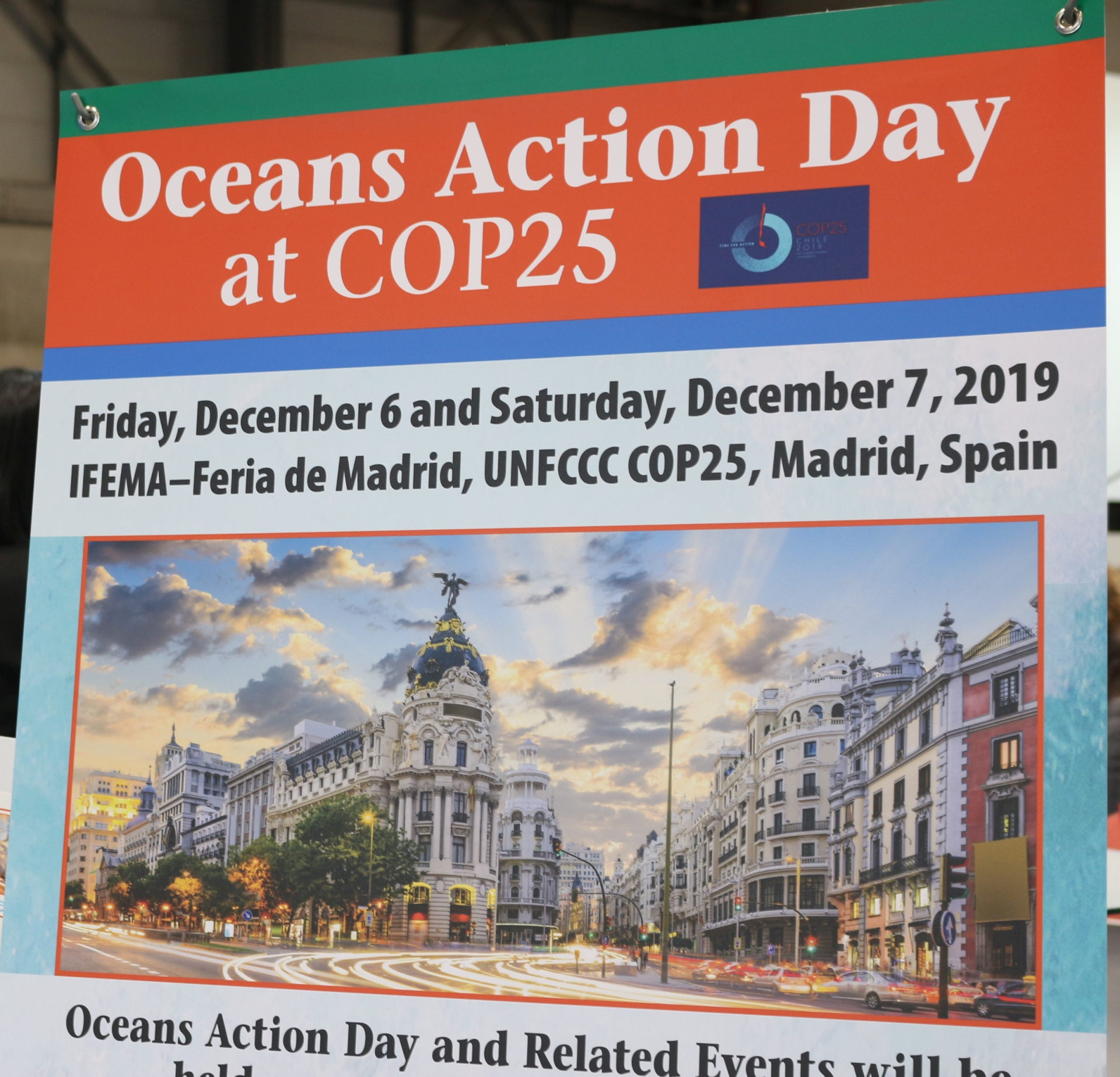 As an opportunity for in-depth discussion of the various issues concerning the oceans and climate change, SPF/OPRI has hosted this event every year since 2015 along with the Global Ocean Forum (US), the Oceano Azul Foundation (Portugal), and UNESCO-IOC et al.

At this year's Oceans Action Day, the Marrakech Partnership for Global Climate Action Oceans and Coastal Zones Action Event was held on the afternoon of the 6th, and 5 events followed on the afternoon of the 7th: (1) Oceans and Climate Nexus within the UNFCCC and Beyond (2) Incorporating Ocean-related Options in Nationally Determined Contributions (3) Ocean Science to Action for Adaptation and Displacement Solutions (4) Galvanizing Support for Oceans and Climate Action and the (5) Reception. Of these OPRI played leading roles especially in (1) and (3). Over the two days of events, 80 speakers and panelists took the stage representing international organizations, governments, research organizations, and NGOs involved in oceans and climate change, with a total of 400 people in attendance. Meaningful discussions were held on a variety of issues, including adaptation and mitigation strategies from an ocean perspective, ocean science, funding, and displacement and immigration.

OPRI-SPF served as main organizer or cooperated in the following events:

The first Oceans Action Day event was the Marrakech Partnership for Global Climate Action's side event: "Oceans and Coastal Zones Action towards 1.5°C," held on Dec. 6th (Fri) from 3pm to 6pm (Hall 4, Side Event Room 6). This event was divided up into segments, with key persons giving their opinions on the various ocean and climate problems. OPRI President Atsushi Sunami served as the moderator for the segment on Mitigation Strategies for Oceans and Coastal Zones, where the panelists pointed out the need for deeper scientific understanding of the warming, acidification, and hypoxia of the oceans and the urgent promotion of necessary conservation measures. They also urged a full-scale promotion of mitigation strategies that make use of the ocean, such as Blue Carbon, at international conferences on the ocean throughout 2020. 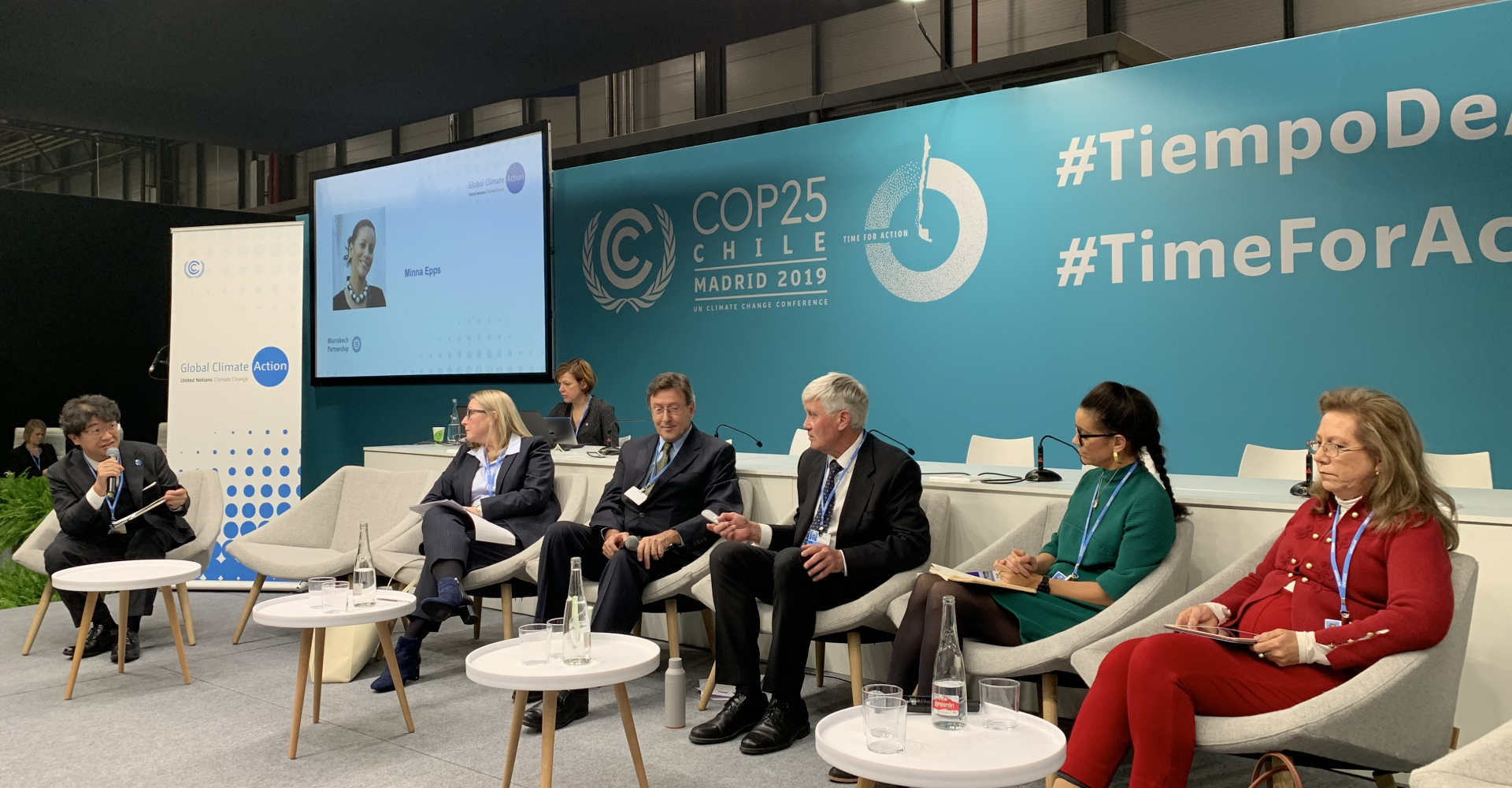 The high level session "Oceans and Climate Nexus within the UNFCCC and Beyond," held Saturday, Dec. 7th at the Japan Pavilion, was co-chaired by Atsushi Sunami, President of OPRI, and Tiago Pitta e Cunha, CEO of the Oceano Azul Foundation. In her opening address, Keiko Segawa, Deputy Director General of the Ministry of Environment, welcomed the event to the Japan Pavilion and introduced Japan's initiatives on the SDGs as well as the ocean and climate problems. Following, were speeches by the panelists. First, Biliana Cicin-Sain, President of GOF, explained the 2019 edition of the Yearbook (ocean and coasts sections) compiled and submitted annually to the UNFCCC secretariat, spoke of various challenges (role of the ocean, mitigation, adaptation, Blue Economy, relocation, capacity development), and introduced the findings of the SROCCC. Safri Burhanuddin, Deputy Minister for Human Resources, Science, Technology and Maritime Culture, explained the importance of the ocean for Indonesia, its NDC and plan for implementation. Haydee Rodriguez-Romero, Vice-Minister, Ministry of Environment and Coastal Affairs, Costa Rica, introduced her country's response to the crisis of climate change, the policies concerning marine areas being promoted in an open participatory process for the sake of healthy oceans, and the promotion of adaptation policies making use of natural resources. She also stated her intention to cooperate with other States to achieve a substantial outcome regarding the oceans at this Blue COP.

Nick Hardman-Mountford, Head of Oceans and Natural Resources, Commonwealth Secretariat, introduced initiatives by the 53 member Commonwealth, including adoption of the Commonwealth Blue Charter, and explained that they were promoting cooperative efforts to seek science based solutions to ocean problems. Helen Agren, Ambassador for the Ocean, Ministry for Foreign Affairs, Sweden, noted that an integrated approach combining both ocean and land based measures is needed for food security and biological diversity. She also spoke on the Blue Action Fund, established by Sweden, France, and Germany, and the importance of fund appropriations such as green climate investments. Taholo Kami, Special Representative (Fiji) for the Ocean Pathway, noted that since Fiji chaired COP23 it has continued to negotiate to make the oceans a mainstream topic at UNFCCC, and that it has also worked toward this end at COP25, in cooperation with other countries. Manuel Barange, Director, Fisheries and Aquaculture Policy and Resources Division, FAO, pointed out the importance of the oceans for human society and the need to keep in mind the vulnerability of those dependent on the oceans for their livelihood when creating policy. In the discussion period, there was a lively exchange of ideas regarding COP25 outcomes and the solutions being demanded. 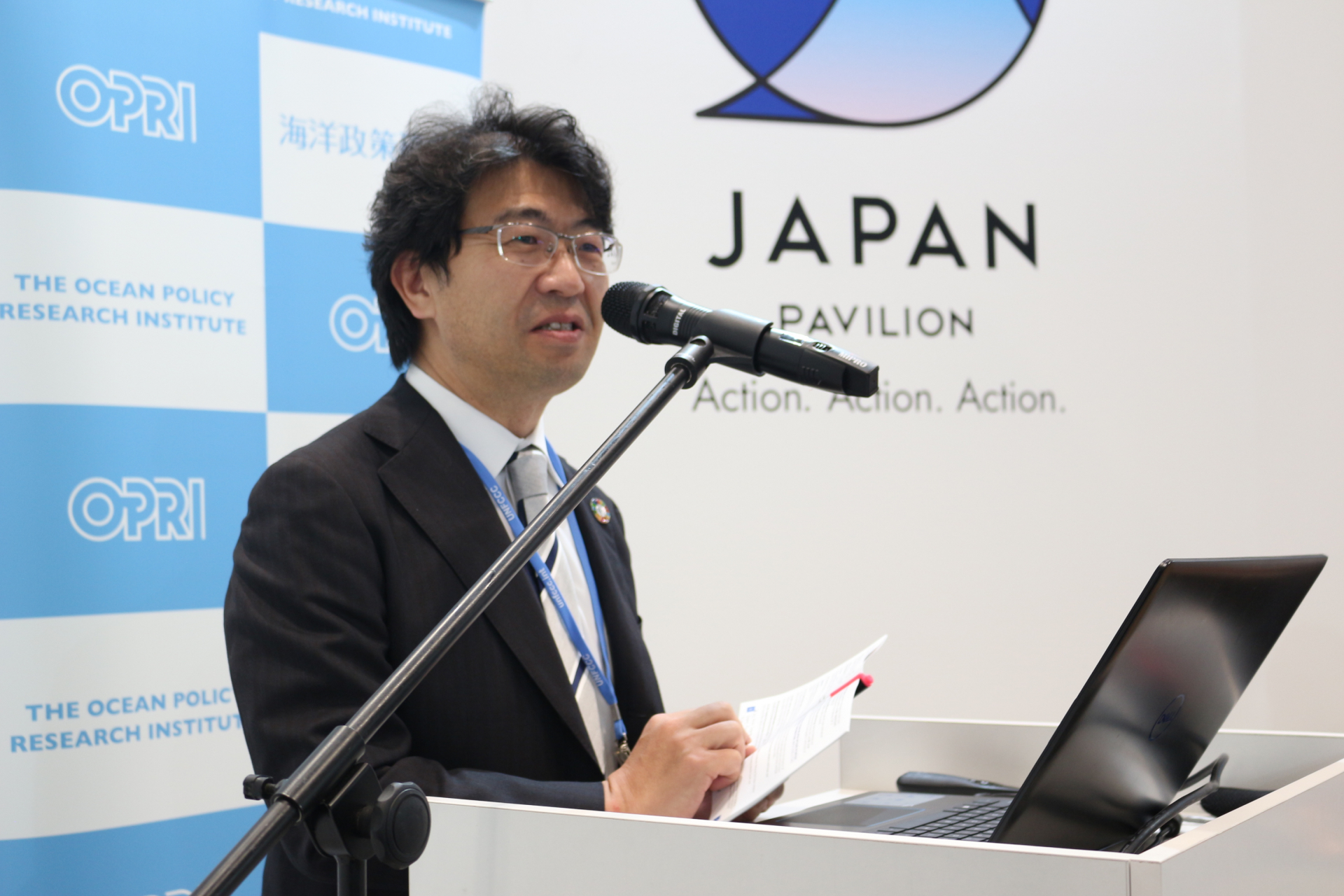 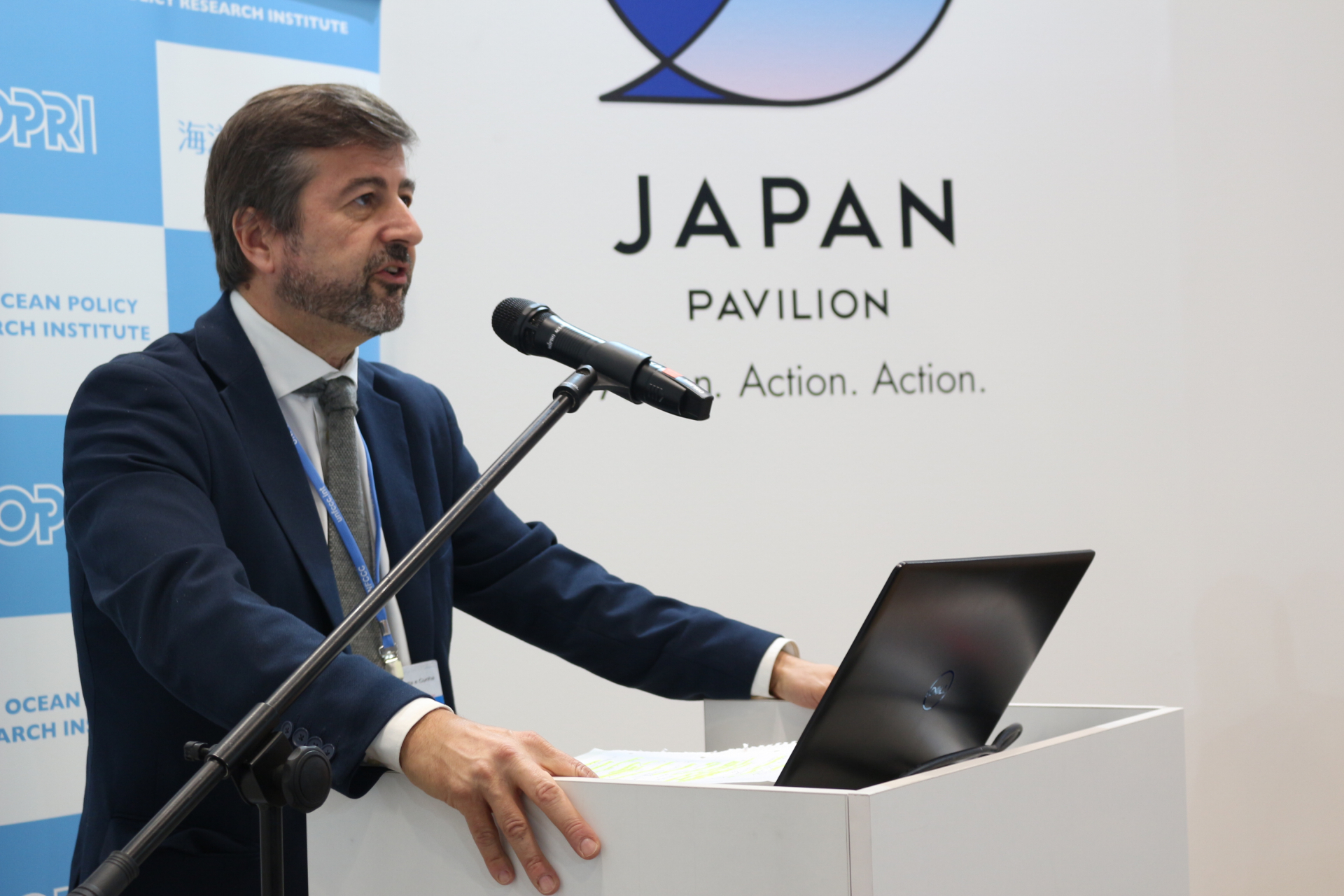 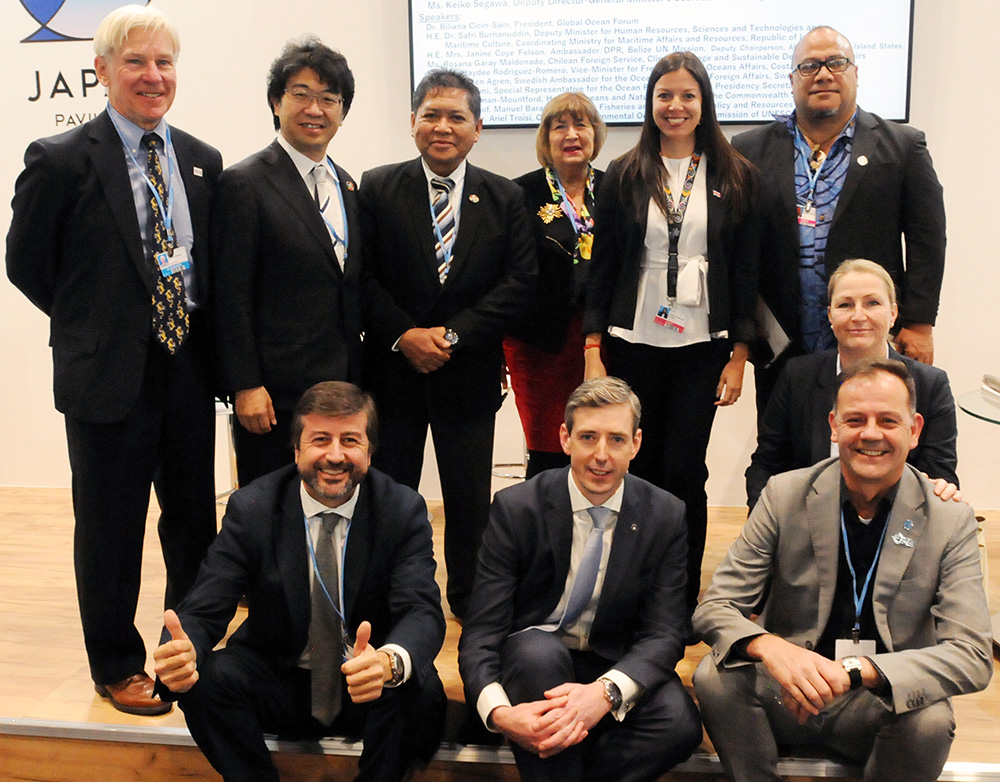 The session Ocean Science to Action for Adaptation and Displacement Solutions, also held at the Japan Pavilion, on Saturday the 7th, from 16:00 to 17:30, was co-chaired by Miko Maekawa, Chief Researcher, OPRI, and Peter Ricketts of Coastal Zone Canada. In their opening remarks, the chairs introduced important findings relevant to the session's theme and stated their desire to identify current knowledge, what further knowledge is needed, what opportunities are available, and who should take action. 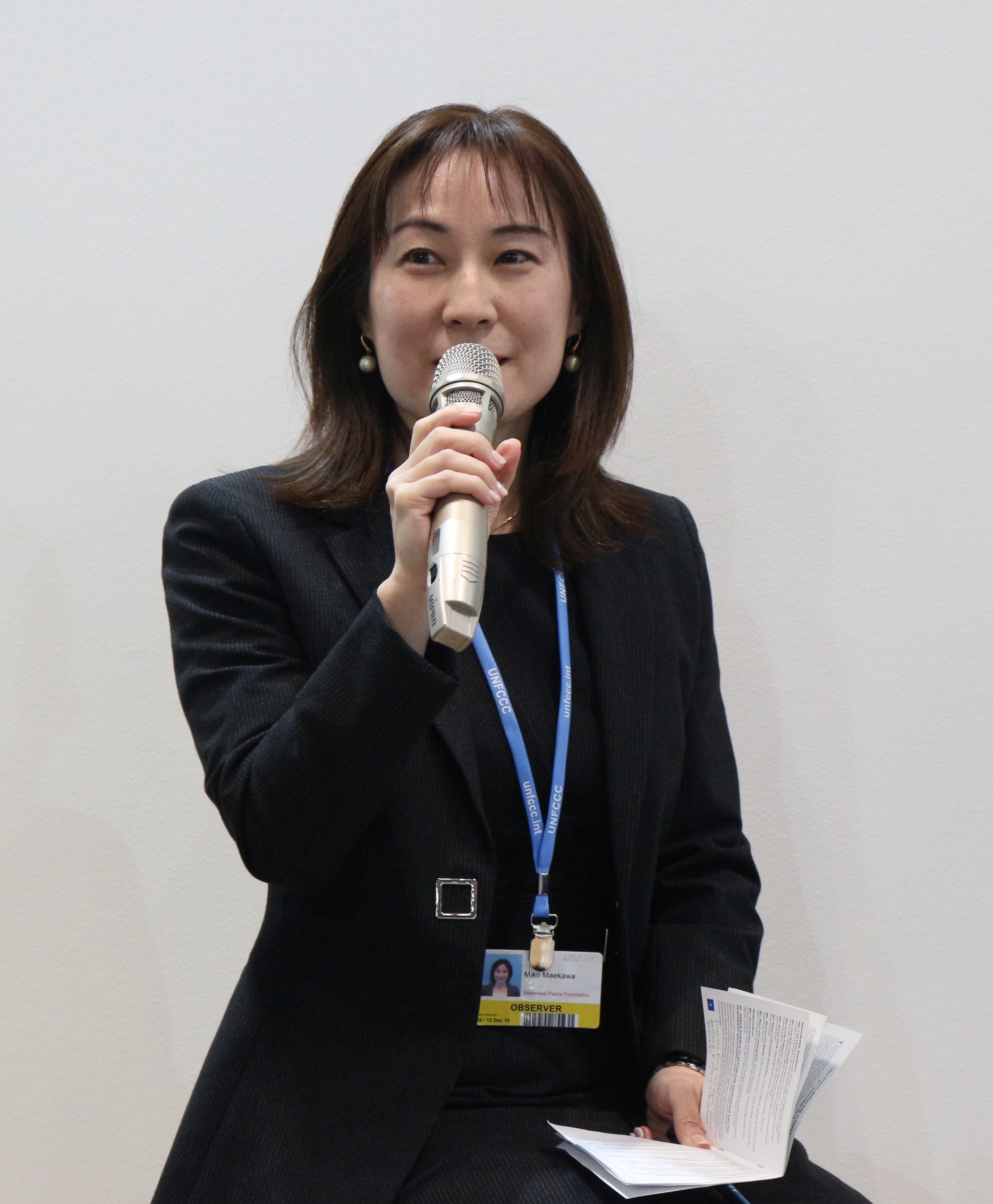 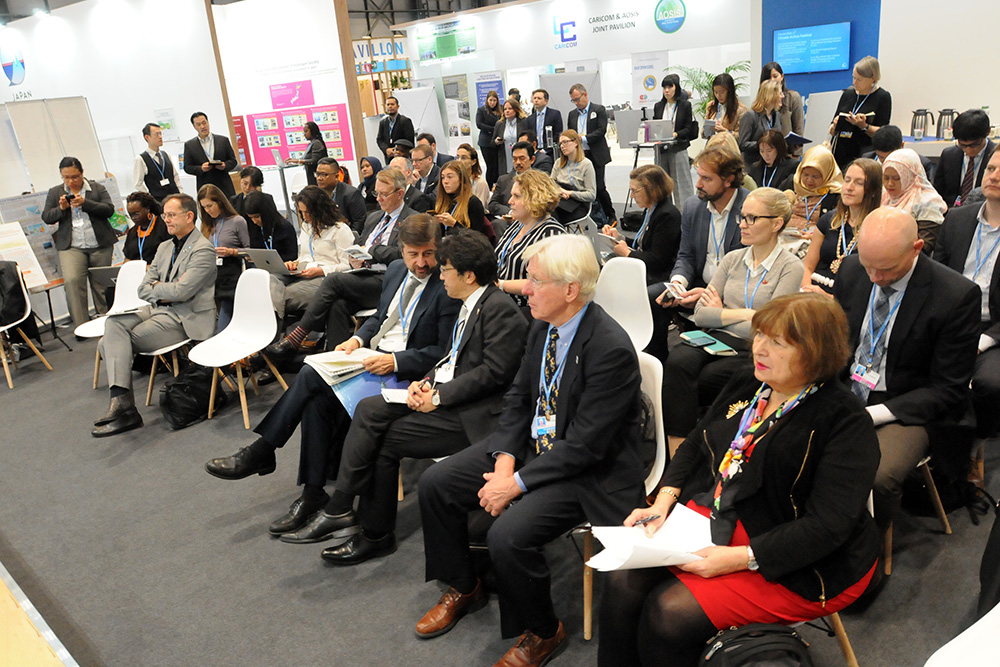 Javier Garat, Chair of the International Coalition of Fisheries Associations (ICFA), had four messages from the fishing sector: 1) fish products are low emission sources of protein and could be a solution to climate change 2) CO2 emissions in the fishing sector are decreasing due to advances in technology 3) improvement of fisheries management leads to climate change adaptation; good management is key and MPAs are not a magical solution 4) it is important to strike a balance among sustainable use, conservation, food supply, and people's daily lives. Espen Ronnenberg, Climate Change Adviser, Secretariat of the Pacific Regional Environment Programme (SPREP), gave concrete examples in explaining the difficulties of relocating in Pacific Island States (especially problematic are relocations stemming from land tenure systems). Mariam Traore Chazalnoel, Associate Expert, Migration, Environment and Climate Change, International Organization for Migration (IOM), pointed out that climate change is a background to the various reasons people have for relocating, that management of such relocations are the main focus for IOM, and that they are promoting initiatives based on the Global Compact for Safe, Orderly, and Regular Migration (GCM), adopted in 2018. Florence Geoffroy, Associate Liaison Officer on Climate Change and Disaster Displacement, UN Refugee Agency (UNHCR), explained UNHCR's role as a platform to support relocations due to disasters, and stated that they would continue in future to address relocation problems due to climate related disasters and climate change. Donna Lagdameo, Senior Policy Advisor and Asia Pacific Focal Point, Red Cross / Red Crescent Climate Centre, pointed out the importance of an integrated risk management approach, forecast-based actions to increase resilience, and community-based actions. Ingrid Timboe, Policy Director Alliance for Global Water Adaptation (AGWA), touched on the importance of climate change adaptation for water management, emphasizing the importance of an integrated approach to respond to climate change and land based pollution in the conservation of freshwater and ocean ecosystems. At the same time, she pointed out the need for reform of water management. Along with introducing current trends in the private sector, the importance of creating and implementing adaptation and relocation policies making use of both scientific and indigenous knowledge was also discussed. 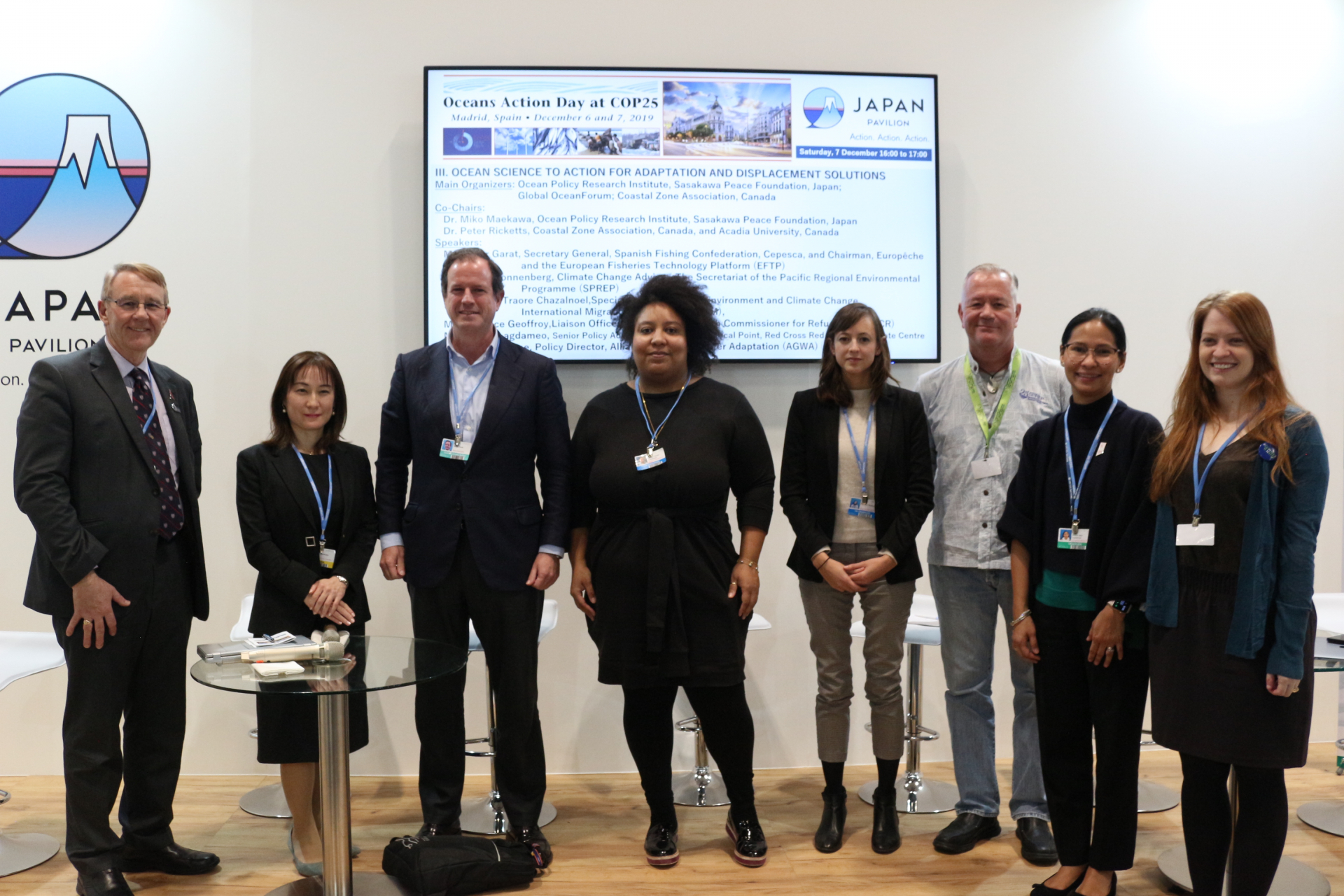 Presenters at the Adaptation and Displacement session

In the other sessions, also, ideas were exchanged among experts from a variety of fields. At the Oceans Action Day event in the Japan Pavilion, Session 2 "Incorporating Ocean-Related Options in NDCs" (Dec. 7th 14:45-15:45), it was pointed out that in the NDCs (INDCs) submitted by the UNFCCC member states, many states included no reference to the ocean, and that in the next NDC submission many countries should include mitigation measures etc., that make use of marine and coastal ecosystems. Common to all the events of Ocean Actions Day was the belief that now is the time for concrete action, and the message was repeated that science based solutions that make use of and give consideration to the ocean should be conceived and implemented.

At the UNFCCC official side event that was part of Oceans Action Day, "Connecting Oceans, Science, Society and the UNFCCC - Raising Ambition on Climate Mitigation and Adaptation" (Dec. 6th 15:00-16:30 in Hall 4, Side Event Room 4), organized with the Plymouth Marine Laboratory, OPRI Researcher Mai Fujii made a presentation on Japan's blue carbon trends. 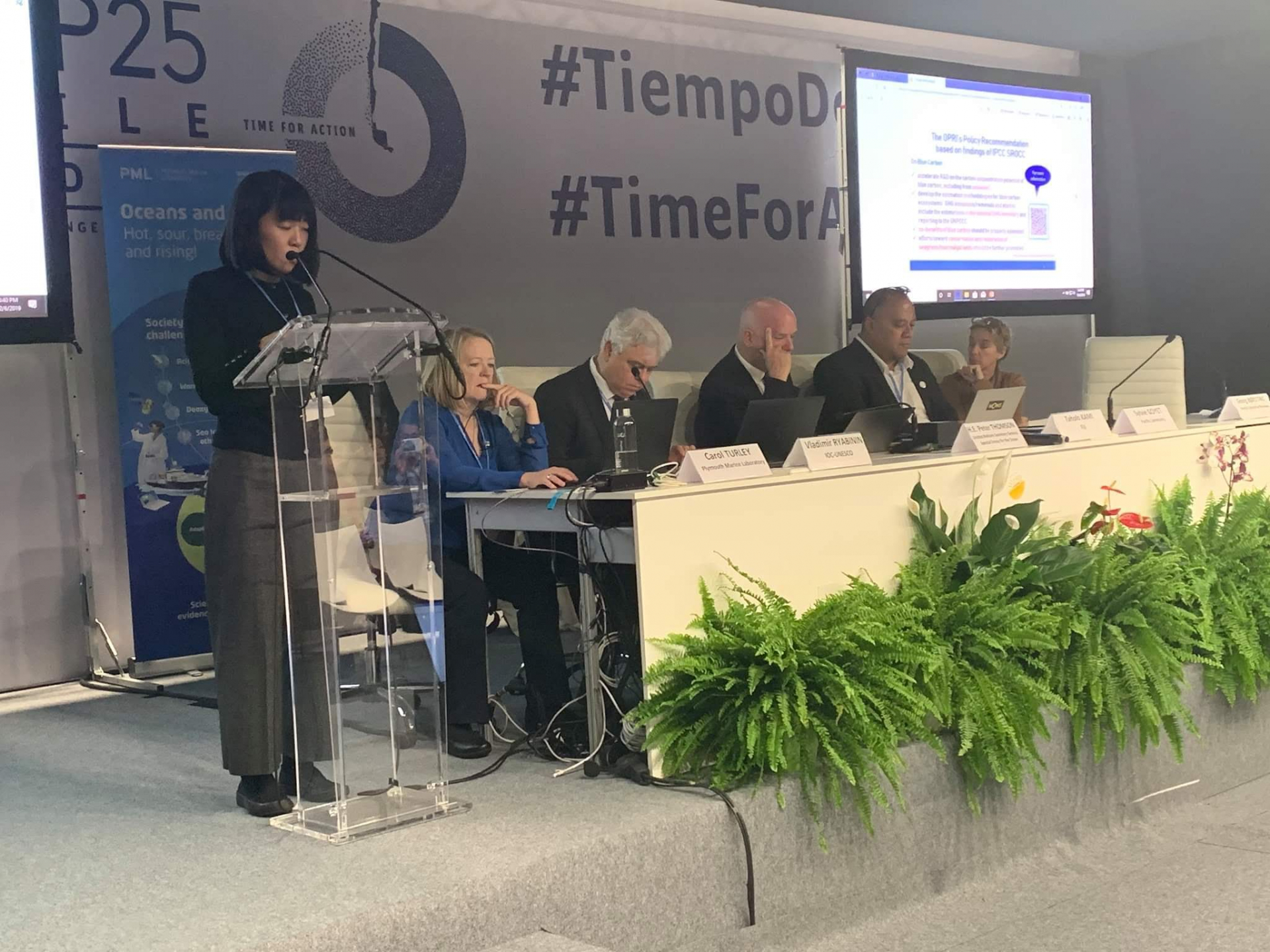 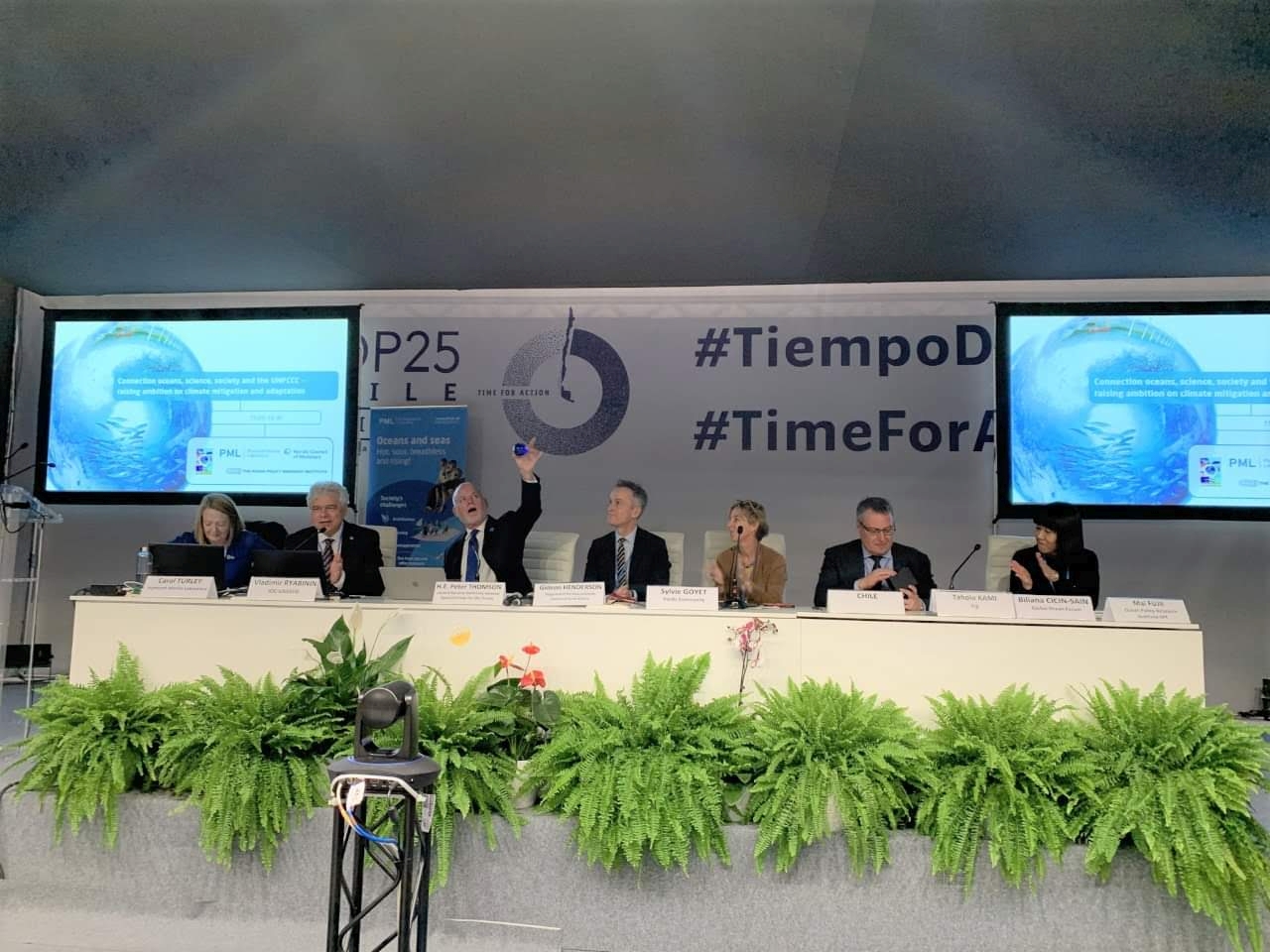 Also, preceding Oceans Action Day, on December 6th from 10:00-11:30, OPRI co-hosted the "Ocean and Climate Change - Contribution of Space Technology" side event with the Japan Aerospace Exploration Agency (JAXA) at the Japan Pavilion. Discussion centered on how space technology can be used to gauge the impacts of climate change on the oceans and coastal areas. Following opening remarks by the co-organizers, OPRI President Atsushi Sunami and Mr. Takeshi Hirabayashi, Director of the JAXA Satellite Applications and Operations Center (SAOC), the Hon. Loren Legarda, Lower House Representative and Deputy Speaker of the Philippines House of Representatives, gave the Keynote Speech on the effects of climate change on the ocean and coastal zones of the Philippines. Mr. Kazuo Umezawa, Senior Researcher at JAXA, gave a comprehensive overview of Japan's satellite remote sensing technology. From OPRI, Ms. Nagisa Yoshioka presented the findings of the IPCC Special Report on the Oceans and Cryosphere, the foundation for the event's discussions. In the discussions, moderated by OPRI President Sunami, there was a lively exchange of ideas based on the latest science concerning promotion of the use of satellite remote sensing technologies in climate change mitigation and adaptation measures. 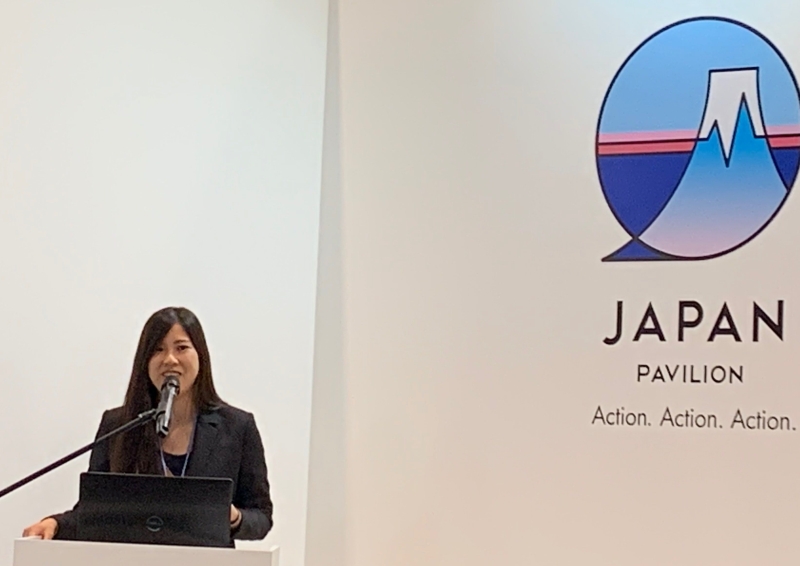 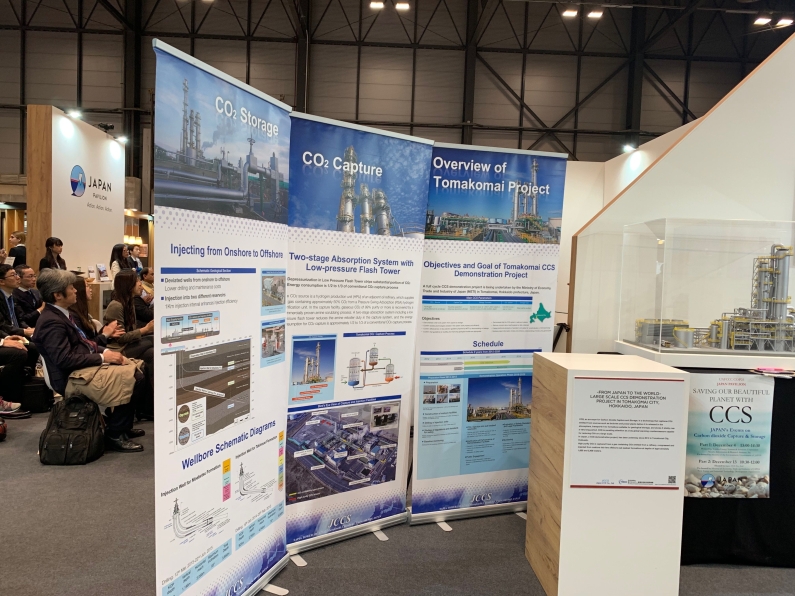 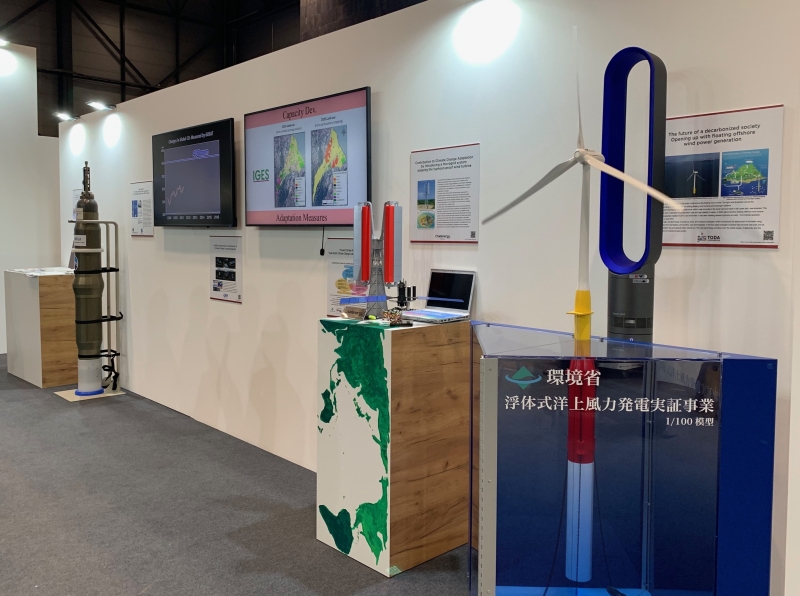