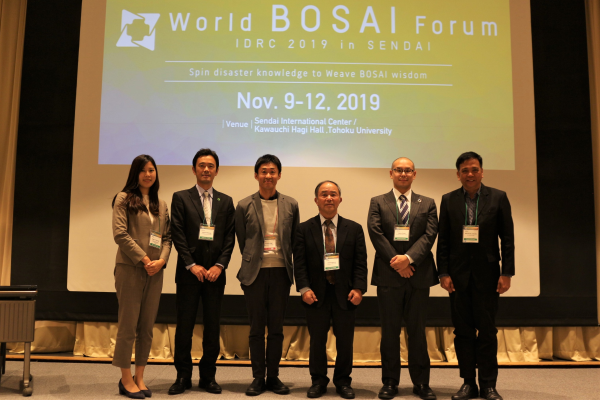 A group photo of the presenters

The Ocean Policy Research Institute (OPRI) of the Sasakawa Peace Foundation (SPF) organized a session entitled“Enhancing resilience of coastal communities through reduction of ocean risks” at the 2nd World Bosai Forum (WBF) held in Sendai City (Sendai International Center) from November 9 to 12, 2019. WBF is an international forum originating in Japan held every other year in partnership with the International Disaster and Risk Conference (IRDC) in Davos, Switzerland. The session was held from 17:30 to 19:00 on the 11th, featuring four researchers who conduct research in Japan, the Philippines, Indonesia and elsewhere from various specialized viewpoints such as coastal environmental conservation, coastal engineering, economics, and social science. They gathered to report on disaster-resistant coastal areas, characteristics of recent typhoons and tsunamis, and the effectiveness and use of tools such as disaster prevention maps and early warning systems. First, Dr. Atsushi Watanabe, Senior Research Fellow at OPRI, explained the purpose of this session, followed by panelists’presentations. The main points of the panel reports, panel discussions, and Q & A sessions from each researcher are as follows.

Dr. Osamu Matsuda, Professor Emeritus at Hiroshima University and Vice President of International EMECS Center, gave a presentation entitled“Possibility of EcoDRR which promotes environmental restoration of coastal communities”. He made three points, citing Seto Inland Sea as an example: 1. Although it is difficult to control disasters such as storm surges and tsunamis, it is possible to control human disasters by changing human activities; 2.To reduce human disasters, community development through conservation and restoration of coastal ecosystems using the “Satoumi” concept is important; 3. Considering environmentally friendly structures such as the Kansai International Airport is one option.

Marlon de Luna Era, Associate Professor at De La Salle University in the Philippines, gave a presentation entitled “Coastal resilience in the Philippines: Challenges and opportunities”. He proposed the following points: 1.The Philippines is frequently affected by typhoons and volcanic eruptions and has a very long coastline so it is often exposed to ocean risks; 2. Capacity Building in Asia for Resilient Education (CABARET) is being implemented mainly by higher education and research institutions in Asia and Western Europe to strengthen resilience to coastal hazards in Asia; 3.The role of higher education institutions is important for multi-hazard early warning in the Asian region. It was suggested that there is a need for community residents to be able to make decisions regarding hazards by having an accurate understanding of the message of these early warnings.

Mr. Hajime Tanaka, a Researcher at OPRI, gave a presentation entitled “Opportunities and challenges of hazard maps using Typhoon No.19 (Hagibis) as an example”. Using the Geographic Information System (GIS), he pointed out: 1.The high accuracy of the inundation forecast map due to river flooding during recent typhoon No. 19; 2.The hazard map had limited information; 3. The results of research in collaboration with Dr. Michael C. Huang of OPRI that combines a hazard map with other socio-economic information, that predicts the economic damage to ocean industries in the event of a tsunami, and that proposes sectors which should be given preference during the reconstruction process.

After the presentations from the panels, Ms. Nagisa Yoshioka, Research Associate at OPRI, facilitated discussions as moderator for the four panelists. First of all, she asked about the harmonious relationships between gray infrastructure based on concrete structures and green infrastructure based on coastal ecosystems. According to Dr. Matsuda, there have been many examples of gray infrastructure that have caused deterioration of the coastal environment and ecosystems in the past. He added, from now on it would be necessary to innovate to create ecosystems even when creating gray infrastructure for disaster prevention and mitigation, mentioning Kansai Airport as a good example, with its gentle slope structure creating ecosystems. Dr. Takagi responded that green infrastructures such as mangrove forests and coral reefs are drawing attention, and verification tests are needed to clarify their effectiveness through more quantitative studies.

Researchers in the panel discussions

The moderator then asked what measures will be necessary to make effective use of hazard maps and early warning systems. Dr. Era responded that it is necessary to evaluate whether the information issued by the government regarding the early warning system is being correctly communicated and understood by the local people who are actually exposed to the disaster. Mr. Tanaka responded that the hazard map needs to be simple and easy to understand, but it needs to contain more dynamic and temporal information. In addition, the moderator asked what preparations are necessary to quickly recover from a disaster. Mr. Tanaka expressed his opinion that preparations such as calculating the economic damage expected from a disaster and identifying sectors to be given preference in restoration efforts are effective.

The moderator also asked what needs to be done to increase community participation in order to lessen vulnerability to disasters. Dr. Matsuda expressed his opinion that the improvement of literacy raises interest in the sea and so could lead to community participation. Mr. Tanaka pointed out that it is important to create a hazard map that considers age and gender, and includes participation by residents.

The session was concluded by the panels expressing their expectations regarding development of a new long-term Eco-DRR based on local knowledge, emphasizing the importance of investigating recent disasters and reducing uncertainty as well as the need to study common and different points of resilience in coastal areas of cities and non-urban areas. They also expressed their hopes that an increase in awareness of the hazard map will make it a tool for dialogue among multi-actors in the region.