In the face of global climate change, extreme weather events result in many cluster disasters worldwide. East Asia is deemed one of the most vulnerable regions on Earth to the impact of global warming, which results in natural hazards such as heavier rainfall, stronger typhoons and floods. It is thus critical to compare the current climate change action strategies in East Asia, such as countermeasures for large-scale disasters, and draft policies and legislations to promote resilient cities and future relevant legislation to mitigate the adverse effects of climate change.

In the opening remarks, Dr. Chin-Da Chuang, Deputy Minister of Oceans, indicated that OAC, as a newly established ministry, aims to tackle comprehensive oceanic issues such as plastics debris and other pollution, requiring international collaborative actions. Ms. Ching-Yi Lin, a medical doctor, as well as the chairperson of Taiwan’s Parliamentary UNSDGs promotion committee, advocated dialogues between ministries and countries over the world for interdisciplinary issues to accomplish various objectives.

In the keynote speech, the Chair, Professor Jiunn-Rong Yeh from National Taiwan University, who is also the former Education and Interior Minister, quoted the famous scene of the angry girl at the Climate Action Summit and gave further explanation on “Climate Change Governance and Democratic Challenges.” Short-term democracy is unable to solve long-term climate change problems. Therefore multi-level governance should be promoted to a wider scope of stakeholders, such as communities, schools and individuals, so that such issues could be internalized effectively to have maximum impacts. 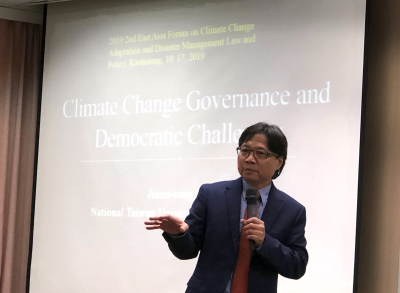 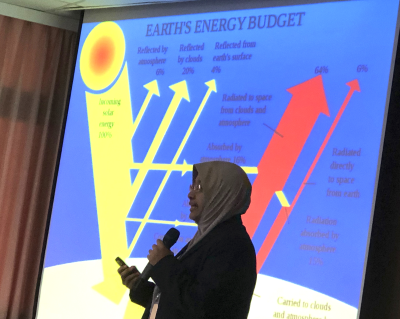 Disaster Risk Reduction (DRR), being an important scheme for blue finance, the research of Mr. Tanaka and Dr. Huang titled “The Opportunity of Blue Finance toward Ocean Risk: Case of Southern Hokkaido” is about using the GIS system to identify locations of industrial units in a tsunami hazard map with the application of a recursive Computable General Equilibrium (CGE) model for policy simulation on the disaster risk reduction. Meanwhile, Ms. Yoshioka presented “Financial Innovation and Inclusion for Climate Change Adaptation toward a Resilient Asia Pacific”, illustrating a framework for a social impact fund toward climate change in Asia Pacific region. The conference was a great platform that provided feedback, and many suggestions were received regarding these preliminary results.

In the closing session, Mr. Chih-Wei Chen, Advisor to Executive Yuan in Taiwan and Fellow of the Royal Geographical Society in the UK, demonstrated the Sustainable Development Goals (SDGs) in Taiwan by showing the films edited for General Assembly promotion, and lastly, NUK President Shyue-Liang Wang topped off the conference by introducing University Social Responsibility as partners of SDGs, indicating that these themes would still play important role in the global arena. OPRI-SPF concluded by expressing that it was a privilege to be one of the partners hosting the Forum and that it would continue assisting such vibrant platforms for global dialogues and for promoting evidence-based research and exchange.