The side event, titled Addressing the IPCC Findings Relevant to the Ocean and Climate Nexus took place on Tuesday, 25 June 2019, in Bonn, Germany, during the 50th session of Subsidiary Body (SB) of the UN Framework Convention on Climate Change (UNFCCC). It was organized by the Global Ocean Forum; Roadmap to Oceans and Climate Action (ROCA) Initiative; Ocean Policy Research Institute of the Sasakawa Peace Foundation (OPRI-SPF), Japan; Intergovernmental Oceanographic Commission of the UN Educational, Scientific and Cultural Organization (IOC/UNESCO); Plymouth Marine Laboratory; Ocean Pathway (Government of Fiji and Sweden), Government of Maldives; Embassy of the Republic of Indonesia, Berlin; Government of Chile; and Oceano Azul Foundation, Portugal.

Over 100 participants attended and there were nine speakers involved in ocean climate action including policy makers, scientists, and think-tanks participants, who gathered to discuss the ocean and climate nexus toward the Blue COP in Chile. 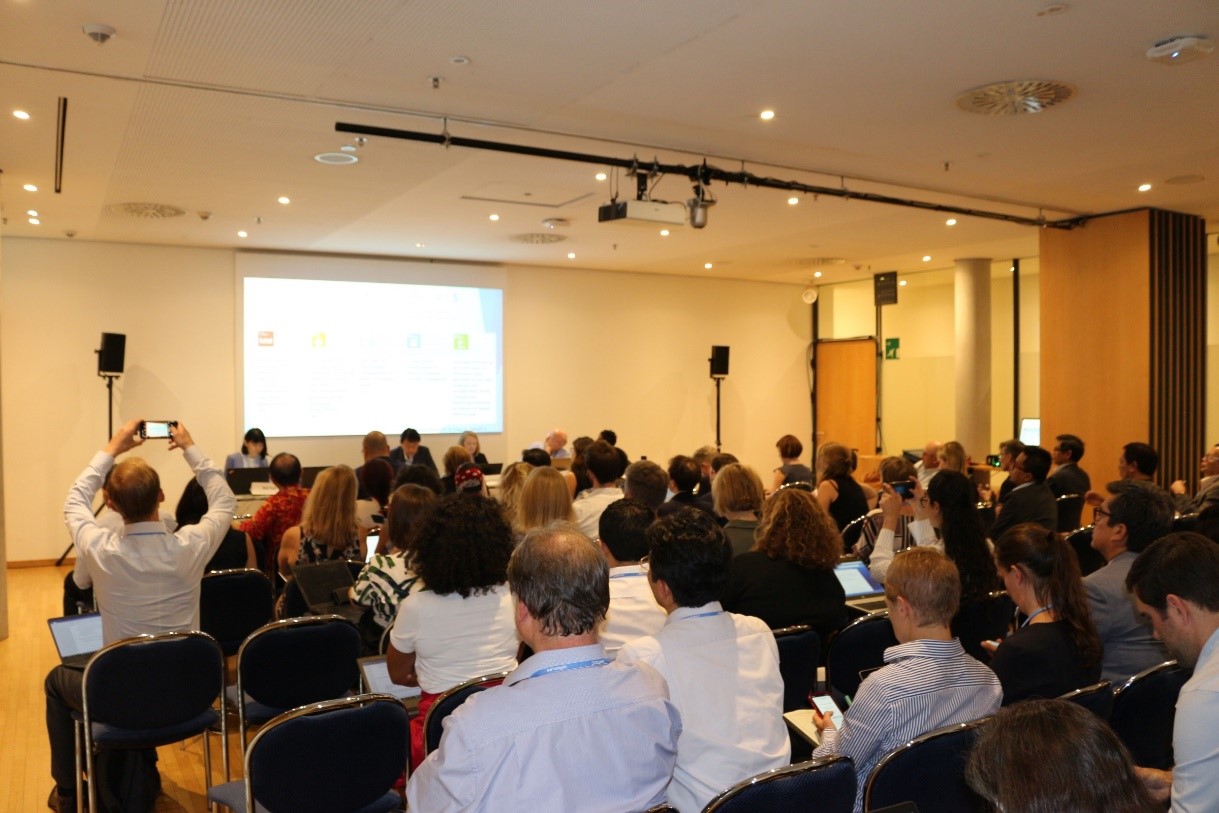 Addressing the Ocean and Climate Nexus: The Time to Act is Now: Biliana Cicin-Sain, President, Global Ocean Forum, underscored the urgency of the moment given the findings of the IPCC 1.5°C report. The report emphasized that: 1) The predicted impacts of climate change are coming much earlier than expected. We will most likely reach a warming of 1.5°C as early as 2030 and no later than 2052, posing immediate threats to peoples and ecosystems around the world, especially in 183 coastal countries and SIDS, 2) There is a marked difference between keeping to a 1.5℃ scenario versus a 2℃ scenario. Under a 1.5°C scenario, very adverse impacts may be avoided (displacement of millions of people due to sea level rise, increased frequency and intensity of storms, death of coral reefs), and 3) Limiting global warming to 1.5°C will require "rapid and far-reaching" transitions in land, energy, industry, buildings, transport, and cities.

Dr. Cicin-Sain underscored the need to pursue an ambitious course of action regarding oceans and coastal zones at COP 25 and beyond, calling, in particular, for consideration of measures such as the possible development of a UNFCCC Work Program on Oceans and Coastal Zones, requesting the SBSTA/SBI to assess the issues and develop a coordinated approach, or a COP25 Agenda Item to “facilitate the coordination of measures on oceans, coastal zones, and climate change. While there is some discussion/work in various bodies and processes of the UNFCCC on the oceans and climate nexus, these are largely of a piecemeal nature and do not add up to a whole, and do not correspond to the magnitude and importance (environmental, social, and economic) of the oceans and climate nexus.

IPCC Special Report on Global Warming of 1.5℃ and Guiding Ambition in Mitigation and Adaptation: Hans-Otto Pörtner, Co-Chair of the IPCC’s Working Group II, IPCC, presented some key findings of the SR15 underlining that there are clear differences between the impact of climate change between 1.5 ℃ and 2℃ increase in global temperature. Even in a 1.5°C warmer world, there is a high risk of losing 70–90% of warm water corals, with even higher losses at 2℃. Other than coral reefs, he also mentioned that marine biodiversity, coastal and Arctic regions, and small scale fisheries would be endangered as well. He stressed the importance of ambitious adaptation and mitigation which bring co-benefits for some, including biodiversity protection, leading to multiple synergies facilitating reaching Sustainable Development Goals.

Science Addressed in the IPCC Special Report on The Ocean and Cryosphere in a Changing Climate: Carol Turley, Senior Scientist, Plymouth Marine Laboratory (PML), described how the progress of the forthcoming IPCC Special Report on Ocean and Cryosphere in a Changing Climate (SROCC) has been made to date. She noted that SROCC will address the ecosystems that are not in SR15, including the deep ocean, sandy beaches, rocky reefs, estuaries and kelp forests. In addition, she noted that the multiple impacts on the ocean are directly relevant to GHG emission reduction and the UNFCCC agenda, which is why she emphasized the UNFCCC’s responsibility for GHG impact on the ocean. She proposed to the hosts of COP25 and 26 the idea of adopting WMO global climate indicators, which include some key ocean-relevant factors, into the implementation of the Paris Agreement as part of the assessment under the global stocktake mechanism.

SIDS and 1.5℃ Stay Alive: Mareer Mohamed Husny, Assistant Director, Climate Change, Ministry of Environment, Maldives, lamented that the coastal areas and coral reefs in Small Island Developing States, including Maldives, are seriously endangered. On the other hand, he stressed the importance of securing the 1.5℃ goal in the long-term through enhanced adaptation and mitigation by UNFCCC communities as well as empowerment of IPCC to provide robust scientific evidence, calling for increases in investment.

How to Translate Ocean Science Into UN System Action: Kirsten Isensee, Program Specialist, IOC/UNESCO, highlighted some key points relevant to the ocean in UNFCCC and the Paris Agreement. The roles of IOC in sustainable use of ocean resources are divided into three parts: providing scientific knowledge, policy setting frameworks and management actions, and promoting public understanding and stakeholder engagement.

She suggested that technology transfer would be one of the important mechanisms for enhancing capacity particularly in developing states. Kirsten called to promote and cooperate for scientific and technical translation, and UNFCCC thus must support the development of international and intergovernmental networks doing research and collecting essential data. As the Paris Agreement notes, she stressed collaboration and enhanced actions to transfer the technology and scientific knowledge to increase capacity, including through stakeholder involvement.

Promoting Decision-Making based on Best Available Science, Blue Carbon as a Case: Mai Fujii, Research Fellow, the Ocean Policy Research Institute of the Sasakawa Peace Foundation, spoke about the latest scientific findings of Blue Carbon and how to elaborate the scientific based decision-making. She noted that IPCC SR15 mentions co-benefits of Blue Carbon including the effectiveness of natural coastal ecosystem in reducing the negative impact of sea level rising and intensifying storms. As the latest finding, she introduced the study on the potential of shallow coastal ecosystem as a carbon sink, which was conducted by the Port and Airport Research Institute, Japan. She noted that Blue Carbon has recently been attracting increasing attention of experts and policy makers, highlighting Japan’s involvement of Blue Carbon in long-term mitigation strategy.

Indonesia’s Progress and Challenges in the Context of Climate and Ocean Nexus: H.E. Arif Havas Oegroseno, Ambassador of the Republic of Indonesia to the Federal Republic of Germany, first mentioned that Indonesia has been affected by climate stress, particularly sea-level rise. He noted that a study in Indonesia showed that erosion has caused loss of land and even human relocation, noting that the current situation is higher than the IPCC prediction. In addition, he pointed out that the geopolitical impact of sea-level rise has not yet been discussed at the global level. NDCs and action in coastal communities require adaptation efforts. Highlighting Indonesia’s works including Green Bond issuance, he called for the sharing of best practices across countries and also shared his high expectations for the Blue COP in Santiago to provide strong momentum.

Key Steps toward the Blue COP in Chile: Taholo Kami, Special Representative for the Ocean Pathway, COP 23 Presidency Secretariat, Fiji, stressed that there is room for further consideration on possible action through the Blue COP, and heading into the UK’s COP26, and for negotiation involving scientists on the necessary steps in the UNFCCC processes. The Ocean Pathway had a discussion with representatives from the Parties in Suva, Fiji, and they recognized UNFCCC’s role in the coordination and measurement and reporting of ocean function in climate and suggested some actions including a work program for the ocean. Furthermore, he mentioned clear outcomes of the Blue COP would be a challenge for COP25 as well as for the ocean community and called for collaborative works between climate ocean action partnership and the COP25 Presidency to ensure the ocean be substantially discussed in the UNFCCC process.

Chile’s Vision on Ocean and Coasts for COP25: Rosana Garay Maldonado, Chilean Foreign Service, Climate Change and Sustainable Development Affairs, outlined Chile’s vision on ocean and coasts for COP25, on behalf of the Presidency of COP25. She noted that COP25 calls for greater levels of ambition, time for implementation, and highlighted seven priority topics including the ocean as a top item. Chile is active in initiatives regarding the ocean, and seeks opportunities to bring the ocean topic to the forefront of discussion under the UNFCCC within a party-driven process. She stated that the Presidency has positive expectations for taking the ocean into consideration through learning about experiences of previous Presidencies such as gender-related issues, cooperating new topics and cross-cutting things, and identifying the role of previous preparation of technical discussion.

(Left) Arif Havas Oegroseno, Ambassador of the Republic of Indonesia to the Federal Republic of Germany

This Side Event Summary has been prepared by the Ocean Policy Research Institute of the Sasakawa Peace Foundation, Japan, with support from the Global Ocean Forum.